TravelTech: The Misfit Flash Is A "Flash" In The Pan, Don't Waste Your Money


Being a gym rat, avid golfer and frequent traveler, fitness is important even while on the road. With aerobic machines rarely available while on vacation, a fitness monitor provides a quick and easy way to ensure I get enough exercise, at a glance, so I bought the Misfit Flash through Amazon.com.

When the Flash synced with the Misfit app, it seemed to work well enough. The "points" (steps) were sometimes off (low) and sleep stopped tracking if I awoke after 5am, even if you go back to sleep, but for $30 it was acceptable until it stopped syncing altogether. The instructions that came with the Flash were totally inadequate and their website provides little, if any, technical information or support (for example, they do not bother telling you how to change the battery). 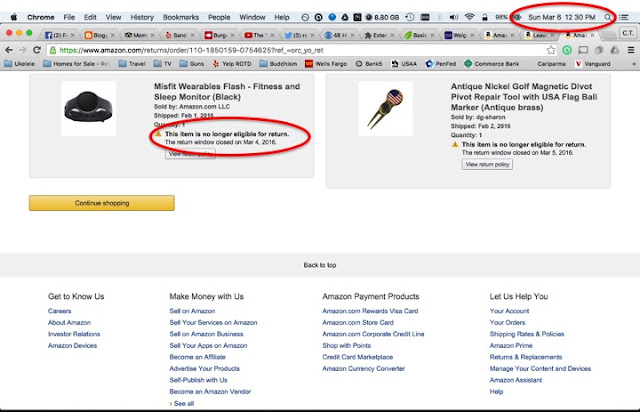 Even though I had the Flash for a little over 30 days, 32 to be exact, Amazon at first refused to allow me to return it. The device worked OK in the beginning, but recently only synced intermittently with the Misfit app. I had bought one for my wife a few days after getting mine (because it seemed to work OK at first), but her's did not sync for weeks and then would not even pair with the Misfit app via Bluetooth.

I contacted Misfit on numerous occasions (February 4th, 6th, 27th, 28th and March 2nd to be exact) about a fix, but they either refused to respond or sent me the same lame cut and paste instructions that are available on their website. They dragged their feet long enough that I was 2 days out of warranty by the time I got around to contacting Amazon about a return. Fortunately, my wife's Flash, also bought through Amazon, was within the 30-day return policy, but I thought that I was apparently out of luck.

I ended up returning my Flash in the same box I was returning my wife's in, even if I would not receive a refund, contacting Amazon (not an easy thing to do by the way) and letting them know of my dismay. Low and behold, I received an email the very next day telling me that they were processing a refund for my former Flash in addition to my wife's. Maybe their motto, "We're Building Earth's Most Customer-Centric Company", is true after all!

The Misfit Flash is junk and Misfit obviously doesn't care about their customers, so do not waste your money.

CombatCritic Gives the Misfit Flash (and Amazon.com's published return policy) 1 Bomb Out Of 10 and a spot on my Wall of Shame ... More Bombs Are Better!

Title: TravelTech: The Misfit Flash Is A "Flash" In The Pan, Don't Waste Your Money

Translation for Civilians: FUBAR = "Fucked Up Beyond All Repair"
Author: CombatCritic at 1:10:00 PM