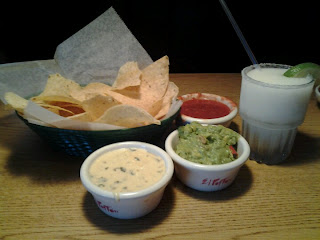 Cinco de Mayo, to my displeasure, was an extremely busy night on a normally quiet Sunday, our normal Rancho Grande evening.  The hostess told us our wait would be 30  minutes, but we ended up waiting over an hour. When I saw that we were next on the list for a table, we went to the front and waited next to the hostess, thinking we would have a table in a few minutes.  A party of eight was seated before us even though they fell after us on the list, but that is not irregular.  What was irregular was the party of two, plus a child, that got our table because they were "friends' of the hostess.  I saw the man conversing with employees earlier, so I knew that he was either an employee or a friend of staff.  So when he and his family were seated, at our table, without being on "the list", I was unhappy, but because of the mass confusion, I kept my mouth shut.

As I said, even though we eat there very week, most of the staff barely recognize us and hardly anybody has any idea what our names are.  Temira, a native-American server with a Hebrew name (meaning "tall"), is one of the few servers that bothers to give us the time of day.  She is very pretty and kind, giving personalized service where most of her peers fail.  A personality ... what a concept ... thank you Temira!  I would like to personally tell Temira how much I appreciate her personalized attention, but the restaurant is not amenable to such conversations.  Fell free to send me a message Temira ... SEND ME A MESSAGE

Having been dedicated and consistent customers for five years, I would expect more from a restaurant where we literally spend thousands of dollars a year.  There are a few servers , like Temira, that stop to say hello, but the busboys know us better than any of them, making sure to bring the "hot" salsa when we arrive.  If the rest of the staff were as attentive as they are, we would feel like royalty, a not so terrible thing considering our loyalty to the establishment.

Joe, whom I still do not know, even though I have been eating at his restaurant every week for five years, should be ashamed for his apathy toward guests and his propensity to suck down beers rather than  ensure his customers get the service and quality we deserve. I do not expect, nor would I accept, special treatment because I am a food critic.  But I am a paying customer and would expect that our loyalty to his business would at least be appreciated, something we have not felt in five years of eating at Rancho Grande. The manager, a nice woman who knows us by face and that I have a food and travel blog, does not even know our names ... after five years ... every Sunday for five years ... can you believe that?  Maybe it is time to find a proprietor and restaurant that appreciates our hard earned money and loyalty.

In all, Rancho Grande in Parkville WAS an excellent choice for quality American-Mexican food with large portions at a reasonable price, but if you want to be appreciated ... go elsewhere!  Jalisco is a new Mexican restaurant is the Parkville area, see my Jalisco Mexican Restaurant Review, and while the food is not quite as good as Rancho Grande, you feel welcome when you walk through the door.

CombatCritic gives Rancho Grande Cantina in Parkville 6 (used to be 7) Out of 10 BOMBS ... Bombs are good!

On the Border ... Surprisingly Good for a Chain! 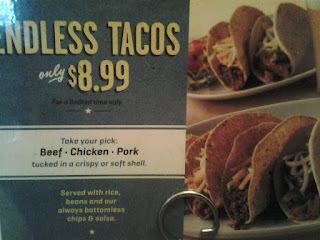 On The Border - Barry Rd.

8340 NW Roanridge Rd.
Kansas City, MO 64151
Website: OnTheBorder.com
Phone: 816-759-2270
Price: $$$$$
I usually do not review chain restaurants, but I was pleasantly surprised on a recent visit to On The Border, a Mexican restaurant chain found many places across the country.

I decided to go because I was havin' a hankerin' for tacos that evening and recalled hearing the TV commercial about their "Endless Tacos".  I am not usually a fan of "all you can eat" restaurants and promotions because I tend to to just that ... eat all I can...AND MORE!

It was a Saturday night and the place was packed, but only had to wait ten minutes for a table.  I was greeted by Kelsie, a lovely and personable young lady who just graduated from Northwest Missouri State and is planning on becoming a registered nurse...BRAVO Kelsie!

I ordered a house margarita, the Guacamole Viva!, and Endless Tacos, but being rather busy it took ten minutes or so to get my margarita.  It was tasty enough, but a little "light" on alcohol for the price. 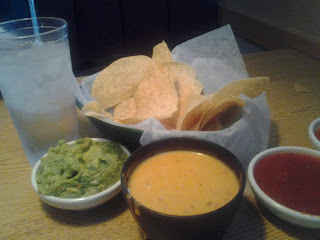 Kelsie arrived shortly thereafter with my Guacamole Viva! which she prepared tableside with two ripe avocados, a little salt, fresh cilantro, diced red onion (I would have used white onion), a splash of lime juice, and chopped tomato.  I am "The Guacamole King" and famous for my delicious guacamole.  A guacamole purist at heart,  I normally ditch the tomatoes (usually a filler in restaurants to make it look like you are getting more, but paying mostly for the much cheaper tomatoes), use finely chopped white onion, and added a clove of garlic or two.  Guacamole Viva! was good nonetheless, but the chips (and salsa) that came with my meal were too thin and broke half the time I dipped...very unnerving!


The Endless Tacos come with spanish rice and beans, black or refried.  You get three (your first go-around) and get to choose from three meats, ground beef, shredded chicken, or pulled pork (carnitas for you non-gringos).  You also get your choice of tortilla, corn or flour, soft or deep fried.  I chose two ground beef tacos in fried corn tortillas and one pork in a soft flour tortilla.  I also dispensed with the rice, knowing that I was not going to waste a bit of room on the cheap "filler" and go for the gusto with the tacos ... AND I DID!

The beef tacos were excellent, coming with plenty of meat, some shredded cheddar cheese, and a small amount of lettuce and tomato on the plate (for all three tacos - more tomatoes required!).  I added some refried beans, guacamole, and salsa to the beef tacos and they were excellent!  Unlike Jalisco, which I reviewed a week or so back, the taco shells remained firmly in one piece, a sign of an expert taco maker and the way I prefer them.

The pork (carnitas) tacos were also very good.  The meat was bountiful and cooked just right, there was a little cheese (I would have liked a bit more), and the tortilla much larger than the corn and toasted just enough to remain pliable, but soft enough to contain the beans, guacamole, and salsa I added.

In all, the meal was very good and I ended-up getting seven tacos.  You should know that after the initial "three" tacos, subsequent "endless tacos" come only in pairs of two, so my second order was a replica of the first, but I only ended-up getting two beef tacos.  I had to order the other pork taco later, but when it arrived there were two, so I took home the seventh taco along with the extra guacamole fro lunch the next day.

I must say that the highlight of my meal was Kelsie. She was sweet and attentive, following up just enough and not too much to make my meal enjoyable and stress free.  Best of luck to you Kelsie in your nursing career!  If you are as good a nurse as you are a server, your patients will be in very good hands!

CombatCritic gives On The Border 6 BOMBS OUT OF 10 ... BOMBS ARE GOOD!