La Familia is a small restaurant with friendly service and decent food. Being a Mexican food junkie from SoCal and used to some of the best Mexican food north of the border, I have high standards. La Familia failed to meet those standards, at least on our first visit.

I ordered the large guacamole, trusting the server when she said it would be "just right" for two ... it was enough for four and at $7+ not a total bargain. It was tasty even though we ended uo taking half of it home.  I also tried the margaritas, an impressive 16 ounces for $5 but lacking ANY noticeable alcohol content (isn't that the whole idea?).

My wife is Italian and not a big fan of Mexican cuisine, so she usually orders a quesadilla and did not surprise me here. An Italian that hates tomatoes, does not cook (thankfully, I am quite a good cook) and does not drink wine, she makes a great designated driver. Trying to find Mexican food WITHOUT TOMATOES is like trying to find a beach in Greenland ... Good luck! The quesadilla was stuffed with tasty sauteed mushrooms, but little, if any, cheese. The name "quesadilla" comes.from the word "queso", meaning cheese, so you would expect cheese. There was none that we could find, but my wife liked it nonetheless.

I always order the staples, tacos and enchiladas, when trying a new Mexican restaurant because if they cannot get those right, there is little chance the rest of the food will be with trying. Store-bought chips and pre-fab tacos shells are another dead give away and La Familia did again disappoint, although the tacos were tasty and the shells the large variety, beating out any Mexican restaurant in Lawrence so far (Fuzzy's Tacos being the exception), but that is not saying much. The cheese and onion enchilada was nothing special. Finally, the "sweet" salsa I had heard so much about was awful, but thankfully they have two other savory and spicy options.

In all, when a bunch of gringos run a Mexican restaurant, you cannot expect authentic recipes and that was the case at La Familia. We will return and give them another chance only because they are so convenient and my wife liked the chesseless quesadilla. Asta la vista baby!

Finally ... Delicious Mexican Food in Lawrence and Reasonable Prices Too! 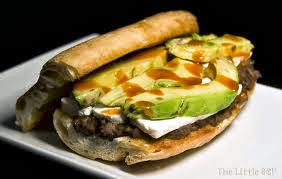 Being a Mexican food junkie from SoCal (LA-LA LAND) and used to some of the best Mexican food north of the border, I have high standards. I read about Tortas Jalisco on Yelp where the restaurant seemed to get mostly very positive reviews.  I hesitated going there only because I heard they charge $2.69 for chips and salsa, something I have never seen in over 50 years of eating at hundreds of Mexican restaurants north and south of the border.  Not a good business practice from my perspective and a fact that may account for the reports of empty tables even on Friday and Saturday nights.  When we arrived on Sunday night at 6PM, there were in-fact only two tables occupied by customers compared to 95 to 100 percent occupancy every Sunday night at our favorite Mexican restaurant in Kansas City.

We ordered the queso blanco (white cheese dip - $4.99) and guacamole (also $4.99), both coming with a basket of chips and salsa (green/spicy and red/mild), bringing the price of each appetizer down to $2.30 each after deducting the price of chips and salsa.  The queso blanco was not very thick and barely attached itself to the chips when dipped, but very tasty nonetheless.  The guacamole was also good, but too spicy for my wife's taste and with too many tomatoes for mine.  Tomatoes are much cheaper than avocados, so many restaurants use them as a filler even though traditional guacamole is not normally prepared using tomato (see my recipe below).  Their could have been less tomato and more guacamole for the price, but it was well seasoned and delicious from my vantage point.

I ordered the house margarita (frozen with salt - $4.50), coming in a 12 ounce beer mug, a tasty concoction with a tangy lime base and enough tequila to stand out from other Lawrence Mexican restaurants that seem to serve more diluted drinks.  Twelve ounces did not last long so I ordered the "signature" margarita with dinner, coming in a pint size glass on-the-rocks with premium tequila and a splash of Grand Marnie liquor (with salt - $6), well worth the additional $1.50 compared to the house variety and quite delicious.

My wife is Italian and not a big fan of Mexican cuisine, so she usually orders a quesadilla and did not surprise me here. An Italian that hates tomatoes, does not cook (thankfully, I am quite a good cook) and does not drink wine, she makes a great designated driver. Trying to find Mexican food WITHOUT TOMATOES is like trying to find a beach in Greenland ... good luck! The quesadilla was stuffed with tasty cheese and came with a side of guacamole nearly the size of the $4.99 appetizer ($.99 on the menu). After all, the name "quesadilla" comes from the word "queso", meaning cheese, and my wife liked it even though it was bland because she does not like the sour cream that accompanied the dish or the accompanying guacamole (which was too spicy for her taste).

The name "Tortas Jalisco" literally means "London cakes", but Mexican tortas are actually Mexican sandwiches. The torta Cuban, one of nine sandwich selections (right - $6.00 - see menu below), comes with a pork cutlet, ham. cheese, adobo sauce, lettuce and tomato, and is served with a small side of guacamole. The bread was fresh and lightly toasted and the torta was good, but not even close to some of the best Cuban sandwiches I have had (arguably at Cuban restaurants), lacking a bread with the flavor and consistency of a true Cuban sandwich. A side of French fries would be a welcome addition to help round-out the dish.


I always order the staples, tacos and enchiladas, when trying a new Mexican restaurant because if they cannot get those dishes right, there is little chance the rest of the food will be worth trying. Store-bought chips and pre-fab tacos shells are always a dead give away for mediocre food and Tortas Jalisco came trough with flying colors!  The taco shells are fried in-house, were very tasty, and the shells thick, the tacos withstanding several bites without falling apart and beating out any Mexican restaurant in Lawrence so far in my culinary journey (Fuzzy's Tacos being the only possible exception). The cheese and onion enchiladas were scrummy with just the right amount of filling covered with a homemade red sauce that was one of the best I have tasted in recent memory.  Finally, the "green" salsa I had heard so much in Yelp reviews was excellent with just enough heat and the "red" was also very good, being more mild than the verde (green) version.

In all, the interior is quite basic, yet clean, and the service was a bit slow as I had heard from several Yelp reviewers, but Carlos (our server) was very friendly and helpful, and attentive even though he appeared to be doing everything himself (we saw no other workers in the hour we were there). The chips, thick, crunchy, and also made in-house, were excellent with just the right amount of salt.  I would recommend that the owners consider providing free chips and salsa like the vast majority of Mexican restaurants, silencing their primary critics, and raise the price of their relatively inexpensive dishes by thirty to forty cents each to make up the difference.  As far as I can see, having to pay for chips is the only flaw Tortas Jalisco has, but as I said, ordering an appetizer solves that dilemma quite easily.

CombatCritic gives Tortas Jalisco 7 out of 10 Bombs ... Bombs are good!

Remove the avocados from their skin by cutting them in half, removing the seed, and scraping the contents into a large bowl with a tablespoon.  Smash the avocados with a mashed potato masher until all large chunks are well smooshed.  Add the garlic, lime juice, salt, pepper, and cilantro to the bowl and stir well, ensuring all ingredients are thoroughly distributed (the lime will keep the avocado from turning black too quickly from oxidation - lemon juice can be substituted depending on your taste).

Serve with fresh baked chips (cut corn tortillas in half, distribute evenly across a baking sheet, spray with Pam or other cooking spray, coat with salt, and bake at 325 for 20 to 15 minutes - until brown and crispy) and salsa or pico de gallo.