CombatCritic's "TravelValue' Passes The 100,000 Visitor Milestone In Just 3 Years ... Thanks To You! 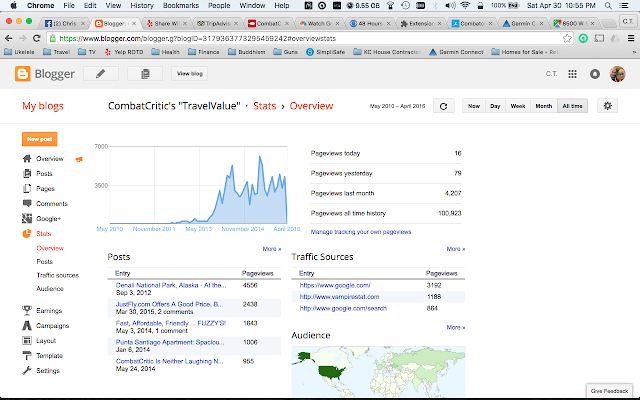 Thank you to all of our loyal readers!

"On The Front Lines In The Battle Against Mediocrity"
Author: CombatCritic at 10:55:00 PM No comments:

Part of traveling includes trips to exciting new places and the possibility of picking up and moving to a different city. We visited Kansas City in 2007 never expecting to move there. Now it is time to move on, so we are selling our home.

After hearing Martin Taggart, Team Leader and Lead Listing Specialist for Select Homes - KC Team Real Estate, on a local radio show, he seemed to say all of the right things so I asked him to possibly list the home we are planning to sell. During our first meeting he seemed personable and savvy, but a couple things he did and said did not sit well at gut level. For example, after viewing the house the tenant had to get her kids to their soccer game, so Martin invited us to Caribou Coffee to make his pitch and, hopefully for him, seal the deal. When it came time to pay for my, my wife's, and his coffees, about $11 total, Martin did not even attempt to pay, hanging back while letting me pay and deliver his complimentary coffee to him. What kind of professional lets a potential customer capable of generating over $20,000 in commission pay for their own coffee AND HIS after extending the invitation? I should have listened to my gut and parted ways then and there, but I gave him the benefit of the doubt.

His Gold and Platinum "Worry Free Listing Addendum" scheme is nothing more, a scheme to get another 1% commission out of sellers (for a total commission of 7% - Platinum). The Worry Free Listing ADDendum also ADDs an ADDitional $595 "Transaction Fee" on top of the already exorbitant standard 6% real estate commission (or 7% in the case of Martin's Platinum scheme) charged on all real estate transactions, something I have never seen in all my years of buying and selling houses. When I asked him why I had to pay a transaction fee on top of even a standard 6% commission, he quickly told me "I'll waive it and pay it out of my own pocket", as if it were something he would owe someone else rather than an invention to produce more profit for his company that it actually is.

Martin was anxious to get the house on the market within two weeks, so he promised to help us expedite the listing and sale by referring contractors he claimed he has "special pull with" to perform needed work on the home in preparation for sale, but none of them panned out, either not following-up or not being available to perform the work soon enough to list the home according to Martin's recommended timeline. Clearly there was no communication between he and "his contractors" about the schedule, wasting my time with numerous phone calls, emails, texts, and a 100 mile round trip to meet one at the subject home in Kansas City. In the end, not one performed as promised, another indication that Martin's words carry little weight.


How can someone include home sales in cities 200 miles away in the numbers that lead people to believe that their Kansas City Team is one of the "top-10 teams in the country"?

Here is Martin on KMBZ Radio, leading listeners, as he did me, to believe that his "Kansas City Team" sales numbers include those of the franchises' offices in Wichita, Hutchinson, and Newton, Kansas:
I followed-up in an email, asking Martin:
His response was "Our team outsold the #2 team in the Metro last year by several hundred units", referring to a team whose sales numbers included ONLY the Kansas City Metro area, not the entire State of Kansas.

When I held his feet to the fire and questioned him about the authenticity of the data he was quoting, requested that he provide objective comparative data in regard to sales in Kansas City alone, and asked him to answer numerous other questions I had, including why he was comparing apples to onions (a Kansas-wide franchise group compared to a single Kansas City based real estate team), Martin refused to answer and quickly replied "I respectfully withdraw our offer to engage in the listing of your home".

There is an old saying in the military about talking the talk and walking the walk, and Martin Taggart can clearly "talk and talk and talk the talk" ... I will leave it at that.

Martin Taggart and Select Homes - KC Team Real Estate Get One Bomb Out Of 10 And A Spot On My "WALL OF SHAME" ... More Bombs Are Better!

Title: Select Homes - KC Team Real Estate "Talks The Talk", But Does Not "Walk The Walk"

Translation for Civilians: FUBAR = "Fucked Up Beyond All Repair"
Author: CombatCritic at 10:40:00 PM No comments:

If You Have Food Allergies, STAY AWAY From Mi Ranchito!

If you have food allergies, STAY AWAY!  For the umpteenth and last time, my wife (who is allergic to tomatoes) was brought her food order with tomatoes in it even though we specified "NO TOMATOES ... SHE'S ALLERGIC!"

They also brought me a house margarita "on the rocks" instead of "blended" as I had ordered and my machaca (shredded beef) fried tacos came with ground beef, but by this time I was fed up and ate them anyway.  The blended margarita ($6.50) had little if any alcohol or taste.

We have been to Mi Ranchito on numerous occasions, but stuff like this happens every time we eat here.  I have explained to management several times how dangerous it is to ignore customer identified food allergies, but it obviously does little good.  The manager brought us a coupon for "Buy one lunch entree, get one free!", but we do not go out for lunch, so ... there you go ... it's absolutely useless and worthless as far as we are concerned.

The food is not bad by Lawrence standards, if you get what you order, but the lack of concern for their customer's health is a major concern and will likely only be rectified after someone with a life threatening food allergy receives the food they are allergic to with potentially lethal consequences.

CombatCritic Gives Mi Ranchito 1 Bomb Out Of 10 ... I Cannot Give Them Anything Higher Due To Their Blatant Lack Of Concern For Customer Safety ... More Bombs Are Better!

Title:  If You Have Food Allergies, STAY AWAY From Mi Ranchito!

Translation for Civilians: FUBAR = "Fucked Up Beyond All Repair"