Let me start by saying that I have a very popular travel blog and have received numerous accolades on several of the top travel and restaurant websites/apps. Unlike many reviewers who are either afraid to tell the truth or have a personal relationship with the business, I reserve 5-stars (10 Bombs on my blog) for only the most flawless restaurants, accommodations, businesses, attractions and destinations, those where you absolutely and without a doubt get the most “bang-for-the-buck”. I try to remain as objective in all of my reviews as possible, providing the pros and cons as I see them and providing a rating based on the overall “value” as compared to similar entities in similar locations. Otherwise, if I hate a place, they get 1-2 Bombs (1-star); if so-so with numerous”issues", they get 3-4 Bombs (2-stars); if average (the vast majority of businesses fall into this category if you look at the distribution of my ratings), they get 5-6 Bombs (3-stars); if above average, they get 7-8 Bombs (4-stars); and if they are one of the very rare “best of the best” values in my experience, they get 9-10 Bombs (5-stars – I always round up from bombs to stars because I use a 10 point Likert-type scale in order to be more discernible). Now, on to my review … 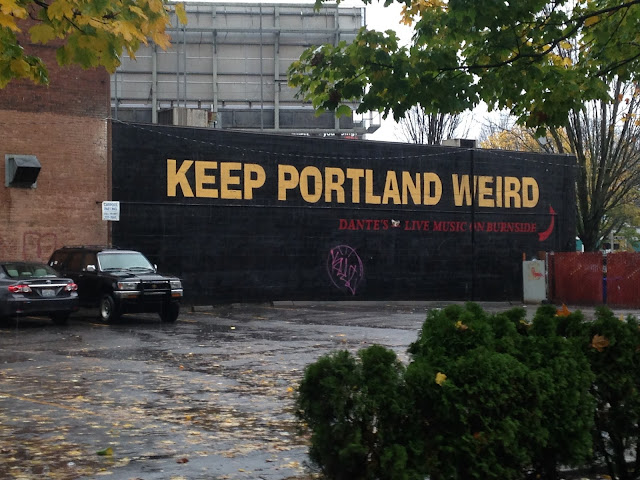 The size of the apartment, privacy, photos and amenities were all spot-on and the apartment was extremely clean, organized and well stocked. Heather even left us a very thoughtful welcome note, a bottle of Oregon wine, and a few local cans of beer in the fridge upon arrival.
The Airbnb description notes, in two places, that the area has "quiet time after 10pm” and that the “hosts live upstairs”, but well after 10pm on our first two nights there was quite a bit of sound emanating from people walking and talking in the rooms upstairs. Heather left on an extended holiday trip a couple days after arrival, so things were extremely quiet and peaceful thereafter. 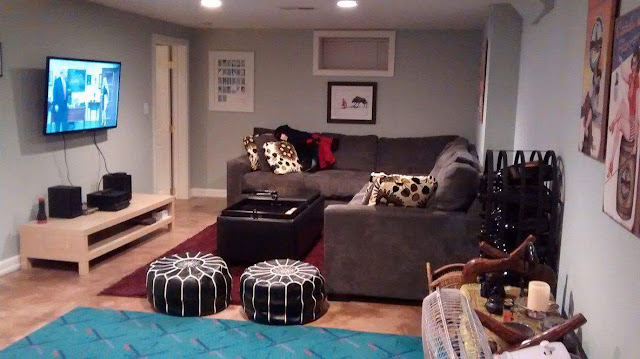 Otherwise, we were not mislead in the least and the apartment was for the most part “as advertised” except as noted above and in the “Location” section below. The apartment was quite large and modern with one big room where there is a sitting/TV area and kitchenette (small fridge, microwave, toaster, kettle, and utensils) with a large table, a decent size bedroom with a comfy queen size bed, and a huge bathroom with shower and all of the amenities you might need while using the “loo”. 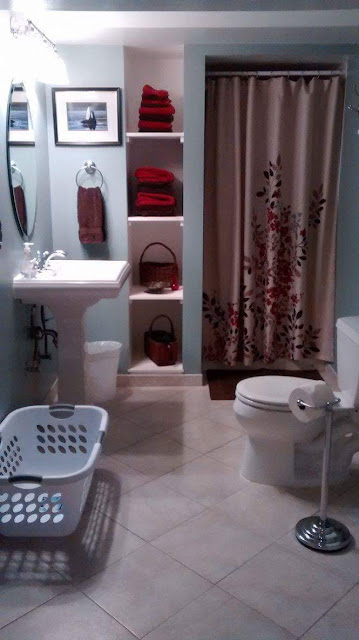 There was little communication after making our reservation on 9/3/2016 and 11/17/2016, four days before our scheduled stay from 11/21/2017 to 11/27/2-16. I finally sent an Airbnb message to Heather four days before check-in, asking about arrival details and telling her what time we would arrive. Heather quickly replied with a detailed message outlining most of the things we needed to know when we got there.

We had no idea how to enter the apartment as listed in the description or messaging, not knowing if we were in the right place because the side door had no exterior light and we had no idea that you actually had to touch the lock before the key pad would light-up. However, I called Heather and she quickly came outside to show us how to get in and give us a quick orientation.

Observation: An exterior light near the entry door and a reference regarding how to operate the electronic keypad, informing guests that you need to touch it to activate the backlight would have been very helpful. We had to use the LED lights on our cell phones while hauling four bags in the drizzle to see where we were going and, even then, we were still unsure if it was the correct door.

I also tried to call Heather the first night to find out how to access the TV channels, but she failed to answer even though I could hear (quite well I might add as noted in "Accuracy") her and her companion moving around upstairs until quite late. She called me back the next morning, apologizing and giving me the required information as well as telling me which phone number would be best used to contact her in the future.
Observations: 1) Clearer instructions or an orientation describing how to use the Apple TV (we had never used Apple TV before) and exactly which channels (there are over 30 options available) are accessible by guests would be helpful; 2) Even though it was noted that "Cable TV” was excluded (looking again at the description after we returned), it would be nice if cable was included in order for guests to be able to access local channels (news, sporting events, etc) during their stay; and 3) Information regarding which phone number to use (work or cell and which was which) for contact purposes would have been very helpful in advance, particularly because of our difficulty finding out how to enter the apartment.
Heather left for the duration of our stay a couple days after we arrived and she gave us clear instructions about how to contact her boyfriend (who was staying in the area) in the event of an emergency. That was fine with us because the noise from upstairs (people walking around and talking) was quite distracting. She did check in with us by phone a few days before departure to make sure things were going well, but we had no interaction with her during our stay other than by phone/text and the five minutes she physically spent with us upon arrival. There was no place to wash the limited number of plates, cups, silverware and glasses other than the bathroom sink and we ran out of coffee shortly after she left, but they were minor inconveniences as there was a Fred Meyer (Kroger’s Oregon version of Walmart) less than a mile west on Glisan.

Observation: We stumbled upon the Fred Meyer by chance while driving back from dinner, so it would be nice if Heather listed such details (nearby markets, pharmacies, hospitals, etc.) in the listing description or, otherwise comprehensive, orientation booklet. 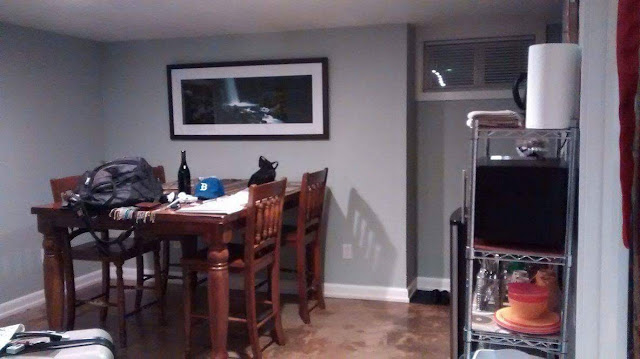 The apartment was extremely clean and comfortable upon arrival with almost all of the amenities you might need during a short stay.

However, we had no idea how to enter the apartment as listed in the description or messaging, not knowing if we were in the right place because the side door had no exterior light and we had no idea that you actually had to touch the lock before the key pad would light-up. When I called Heather, she quickly came outside to show us how to get in and give us a quick orientation.

Observation: An exterior light near the entry door and a reference regarding how to operate the electronic keypad, informing guests that you need to touch it to activate the backlight would have been very helpful. We had to use the LED lights on our cell phones while hauling four bags in the drizzle to see where we were going and, even then, we were still unsure if it was the correct door.

The apartment is centrally located as advertised and it is extremely easy to reach most areas of Portland, which is made-up of a “downtown” and several unique and charming neighborhoods, within a 10-30 minutes car ride depending on traffic. 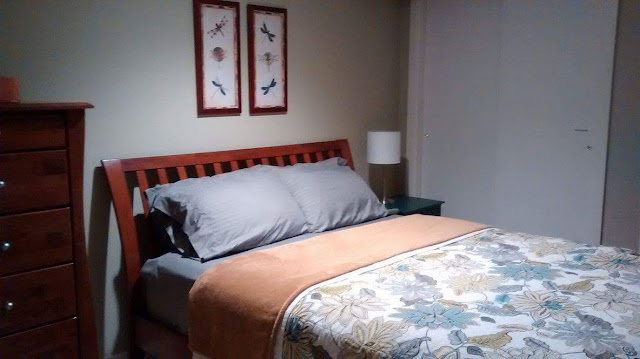 The neighborhood sounds wonderful in the description, but is not what I would consider an “upscale” area and the restaurants and bars within walking distance (over 1/4 of a mile) looked a bit seedy. The closest main streets (NE 81st and NE Glisan) did not look like appealing or extremely safe places to walk at night, so we ate at the many wonderful restaurants around Portland.

For the price, I would say that the locations is very central if you have a vehicle, but expect a fair amount of walking and a somewhat complex transit system if without transportation.

At $90.17 per night, including taxes and fees (we did not receive the 15% discount because our stay was one night short of the 7 day requirement), the apartment is a very good value for the Portland area where things are a bit pricier than in the Midwest and many other places we have visited (41 countries so far). A quick search located several well known chain hotels/motels in the area ranging from $56 to $87 per night, so considering the size, cleanliness, and amenities included in the apartment, we were very pleased with the accommodations although a price in the $80 range would seem more appropriate.