I deleted my original review after consulting with Yelp and the Washington State Attorney General about the slanderous public reply the owner of 2 Rivers Bar And Grill published on Yelp, calling me a "transient" (vagrant) and "creepy" (pervert) in order to try to cover up for their crappy, overpriced, frozen food and highly unprofessional behavior. Rather than apologize for my horrid experience, I was attacked with lies by the restaurant's owner. Let me briefly explain.

I had a horrendous experience here on Father's Day. When I first entered for dinner immediately after a round of golf at the local country club, it was not clear where to go based on the odd layout, so I stood in front of the bar while the bartender, who turned out to be the owner, Derik, stared at me for a few uncomfortable moments, then said "Can I help you?" Of course you can help me you jerk, do people come in to your restaurant to sit down and eat or go shopping? I replied with the obvious, "Yes, I would like to sit down and eat some food please" if it were not obvious enough for him. He also insulted me in front of fellow patrons, hollering out across the bar, "Should I take it outside so you can get a better picture?", as I took photos of my substandard hamburger, drink and the surrounding dining room as I always do when eating somewhere for the first time.

He later claimed in his blasphemous public reply to my review on Yelp that he mistook me for a transient who came in the week before, making excuses for my poor treatment when I first entered, even though I was wearing golf attire appropriate for a day on the links at the country club. Would a transient be wearing golf shorts, a new Under Armor golf shirt, Nike Air sneakers, and $200 Oakley sunglasses? He also claimed that I was secretly taking photos of the waitress, his wife apparently, who had her huge, fake boobs popping out of her tight, very low-cut blouse while I was simply taking a few photos during my experience to publish with my review. This guy and his wife are not just sick, they are compulsive liars.

I had contacted Derik last November, right after they opened, to see if they wanted to be included in my annual Veteran's Day list of local restaurants offering free or discounted meals to veterans and to be published on my popular food and travel blog. Free advertising, basically, as my blog gets over 100,000 visitors a year. Being a retired Air Force officer and disabled combat veteran, I try to do as much as I can for fellow vets because I am one and have worked extensively with active duty and Iraq/Afghanistan veterans as a licensed psychotherapist. Derik refused to acknowledge my offer even though he "claims" to be a veteran himself.

So, when he attacked me publicly and defamed my character, even though he knew I was a veteran and food/travel writer, the gloves came off. You can read about their frozen food, terrible service, and unprofessional behavior in many other Yelp reviews, so I will not detail my experience any further here because it is now about more than that. Can you say defamation of character? This place will be closed soon enough because they are obviously struggling and with frozen food, even worse customer service, and unprofessional attacks against those who offer them constructive criticism, I predict they will not make it through another Pacific NW winter. 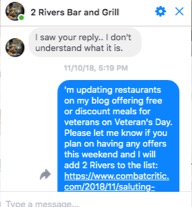 I support local businesses 100%, as I did with 2 Rivers Bar and Grill by offering them free advertising on my blog and keeping an open mind during my first visit (despite all of the negative comments about them on Yelp and other social media platforms - see below), so the last thing I want is for someone to fail. However, when I see someone like Derik, with ZERO experience in the highly competitive restaurant business and who attacks customers whom say anything negative, the writing is, unfortunately, on the wall for this sorry businessman. 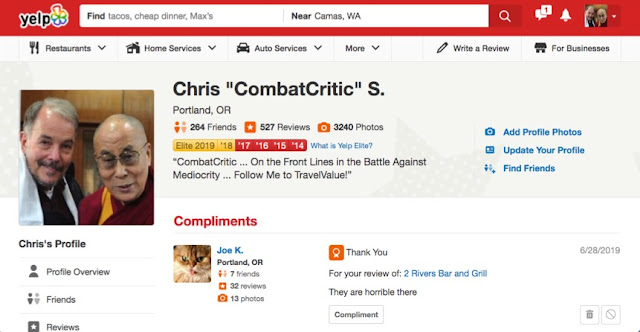 Businesses that offer quality products, outstanding customer service, fair prices, and always act in a professional manner and with integrity have a much higher probability of succeeding in the extremely competitive hospitality industry. 2 Rivers Bar and Grill gets an "F" in all those categories to go along with their current "D+" rating by the Better Business Bureau (BBB). Nuff said. 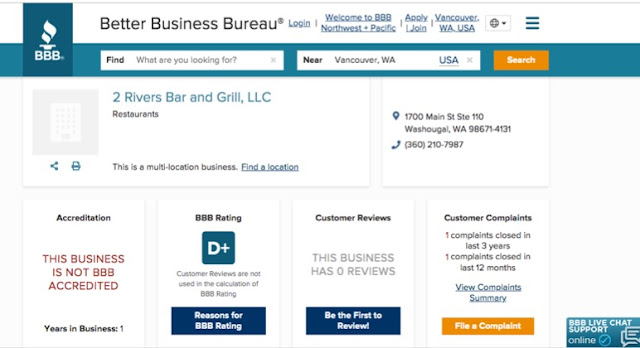 In his reply full of lies, fake news, Derik lashed out with defamatory remarks about me, a highly decorated, disabled, combat veteran and retired U.S. Air Force lieutenant colonel, but he neither addressed nor denied my review comments about his highly unprofessional behavior and extremely low-quality frozen foods, so my assessment must have been spot-on. What kind of lies will he make up when I publish this review I wonder? We will have to wait and see how low this turd of a human being will stoop in his treatment of a fellow veteran.
UPDATE: WHAT GOES AROUND, COMES AROUND
Dirtbag Derik, now a mayoral candidate in Washougal, was arrested for fourth-degree assault domestic violence in mid-September and has suspended his short-lived campaign in addition to losing his wife and business:

WASHOUGAL, Wash. — Camas police have arrested a candidate for mayor of Washougal on a domestic violence charge.
Police say on Wednesday night, Washougal police were dispatched to Derik Ford's house for a reported assault.
When they found out he was the suspect, they called in Camas police to avoid a conflict of interest.
Police say Ford's wife told them he had assaulted her and she had visible injuries.
When they caught up with Derik Ford and interviewed him, they say he denied any physical confrontation.
As of early Thursday night, court records indicated Ford was still in jail.
He faces one count of fourth-degree assault domestic violence.
KATU reached out to his campaign for comment.

WASHOUGAL, Wash. — Washougal mayoral candidate Derik Ford is suspending his campaign after he was arrested earlier this week, accused of domestic violence.

In an email to KATU on Friday night he said he was suspending his run for mayor. His email came hours after he appeared in court on a charge of fourth-degree assault domestic violence. The Columbian reported that he pleaded not guilty.

Police say on Wednesday night, Washougal police were dispatched to Ford's house for a reported assault.

When they found out he was the suspect, they called in Camas police to avoid a conflict of interest.

Police say Ford's wife told them he had assaulted her and she had visible injuries.

When they caught up with Derik Ford and interviewed him, they say he denied any physical confrontation.

Derik has left the building ...

Ok 2 Rivers friends. Thank you for the past few years of support. I, Derik will no longer be part of the operations. ...

CombatCritic Justifiably Gives 2 Rivers Bar And Grill An All-Time Low Rating ... 0 Bombs Out Of 10 And A Spot On My "WALL OF SHAME" ... More Bombs Are Better!

... And Don't Forget To Subscribe To TravelValue TV on YouTube and our sister channel, CombatCounselor Chronicles, with Over 1,250 Subscribers and 1,000,000 Video Views ... HOOAH!
Title: Washougal, WA: Post Script - The 2 Rivers Bar And Grill Attack And Debacle