I guess Peggy did not appreciate my previous 4-star (8 out of 10 bombs) Yelp review this past Easter - that review was selected, by the way, as Yelp Portland's Review of the Day, aka ROTD, on 6/23/19 - after having sent her the link via Messenger where we had been talking based on her interest in my assistance as a new restaurant owner. However, I never even got a thank you, FU, or anything else for that matter. Having managed large military organizations in my 20-year career and several successful businesses since, I foolishly thought that my 10+ years of experience could help a local business owner get on her feet as quickly as possible. Because I am a firm believer in supporting local businesses, I had offered my assistance last March and Peggy initially seemed very receptive, but when I returned with my wife, son and his girlfriend for breakfast last weekend to see what had changed, I was quite discouraged by what I saw.

The first thing I noticed was the chalkboard behind the cash register advertising Key Lime Pie for $25 (whole pie) or $6 for a slice as well as Cheesecake going for $45 per pie and $8 a slice. I had assumed that customers might get 1/6 of a pie for the quoted prices, but right beside the register is their dessert display case with rather small slices of key lime pie and cheesecake, likely 1/8 of a pie in size. Do the math. Apparently, she decided to blow off my suggestions as well as my concerns about her $8 biscuits and gravy in my first review. 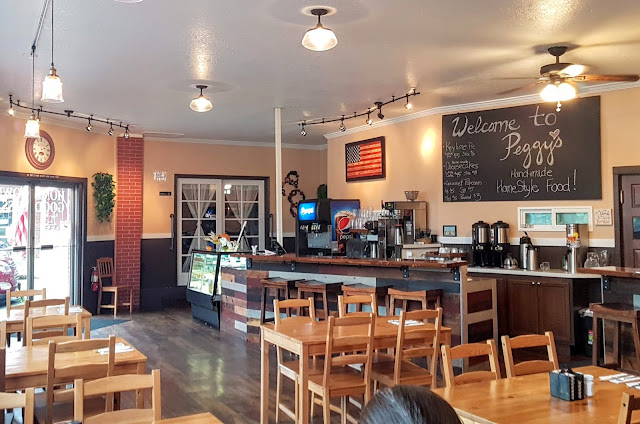 The place is bright and clean, and we were seated right away. The menu is very much the same as last time and her prices on most items are spot-on, even lower than some other local eateries. My son ordered the classic breakfast - 2 eggs, hash browns, choice of meat, and toast for $9;  his girlfriend, who is vegan, ordered a "vegan" Breakfast Burrito ($10) with "NO MEAT, NO EGGS, AND NO CHEESE, only hash browns and veggies"; my wife had her usual, the French Toast ($9) which came with 2 slices of bacon; and, finally, I asked for a Half Order of Biscuits and Gravy ($5), making it "A Meal" for $4 more by adding 2 eggs and 2 slices of bacon, and adding a side of hash browns ($2 more for a total of $11).

My son was quite happy with his classic breakfast, but the bacon was way too dark and crispy, likely because they were about to close and decided that they had to use the rest of the food that had been sitting around for God knows how many hours. The eggs seemed to be cooked as ordered - over medium. 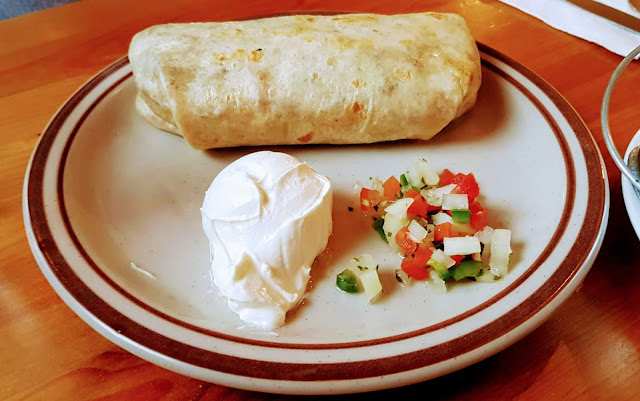 His girlfriend's $10 VEGAN breakfast burrito was tiny for the price and it came with a big GLOB OF SOUR CREAM just a fraction of an inch from the burrito. She thought about saying something, but decided to bite the bullet. When people identify a special diet or food allergy to a server when ordering, a restaurant MUST  ensure that the food is prepared as ordered with ZERO cross-contamination because that is what the customer wants and a simple mistake could result in death. Oops! 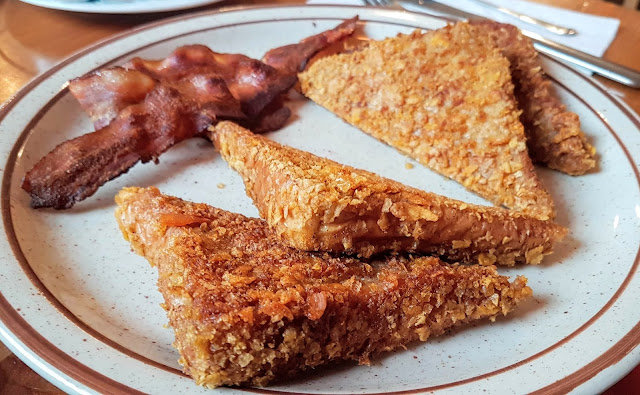 My wife's french toast was identical to our last visit and she liked it very much, but this time her bacon was also too burnt to eat, so she tossed the slices on my plate. Her coffee was bland and weak, a total disappointment after the Hawaiian blend they served on Easter. 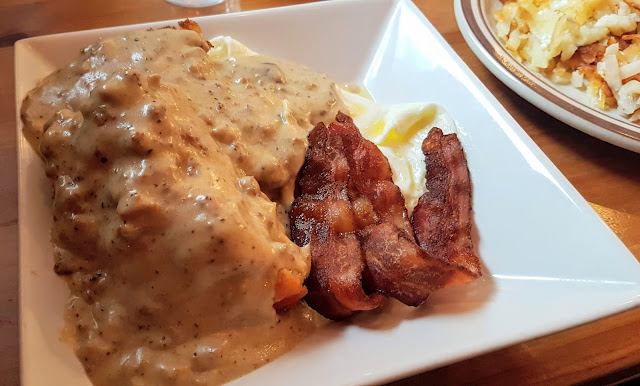 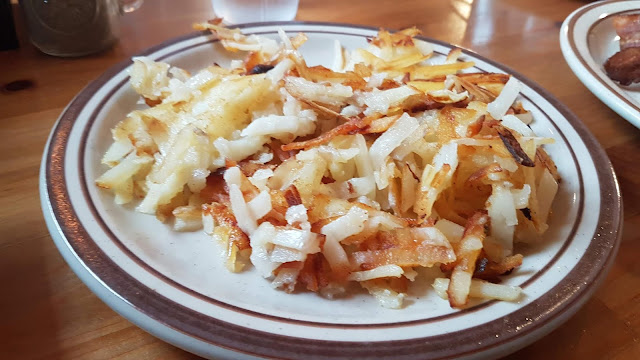 When my biscuit (singular) and gravy, bacon, and eggs (over-medium) arrived in a bowl, I was a bit surprised and could not see the eggs until I realized that they were under the biscuit and gravy! Fortunately, for me and them, I like to toss my biscuit, gravy, bacon, eggs, and hash browns into a pile, cut them in to bite size chunks, and enjoy the enmeshment of flavors ... YUM! Alas, my bacon was the same as the rest, but I also do not mind crunchy on the continuum of bacon choices. My sole issue was that my over-medium eggs were served over-easy, a faux pas that a predominantly breakfast restaurant should not be making. Again, I am more flexible than many and it was not a biggy as far as I was concerned. As we say in the US Air Force: "Flexibility if the key to Air Power" ... HOOAH! 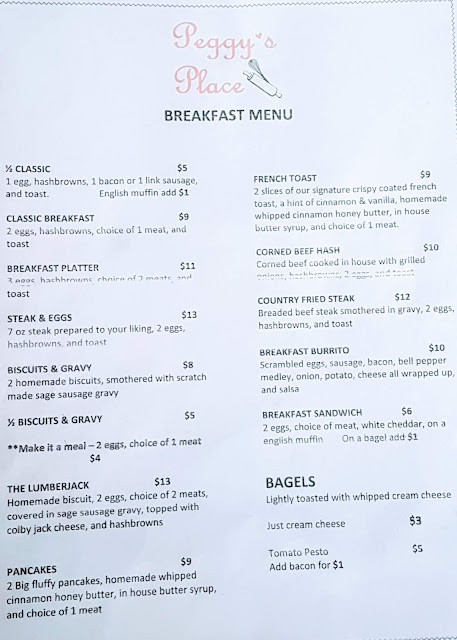 There is still no Peggy's Place website, no menu posted online (other than the one I posted last Easter and it was removed from Yelp for some unknown reason), no advertising, and zero social media presence, all things I recommended earlier this year. They have not even claimed their Yelp page and most likely have not read their negative (and positive) reviews.


If business owners neither listen to their customers nor understand advertising in this day and age, the likelihood is, ultimately, failure. Most new restaurants close their doors within the first two years and I hope that does not happen here, so I seriously hope Peggy's Place is prospering despite my serious concerns.


CombatCritic Gives Peggy's Place A Very Generous 4 Bombs Out Of 10 - A 4 Bomb Deduction From Last Easter - More Bombs Are Better!