Asking for quality and value in a tourist area restaurant is probably asking for too much and Adriano's Bistro is not the exception. Looking more like a nightclub than a restaurant from the outside, the interior is somewhat dated with wood paneling, hard wood floors, and basic tables and chairs sans tablecloth. 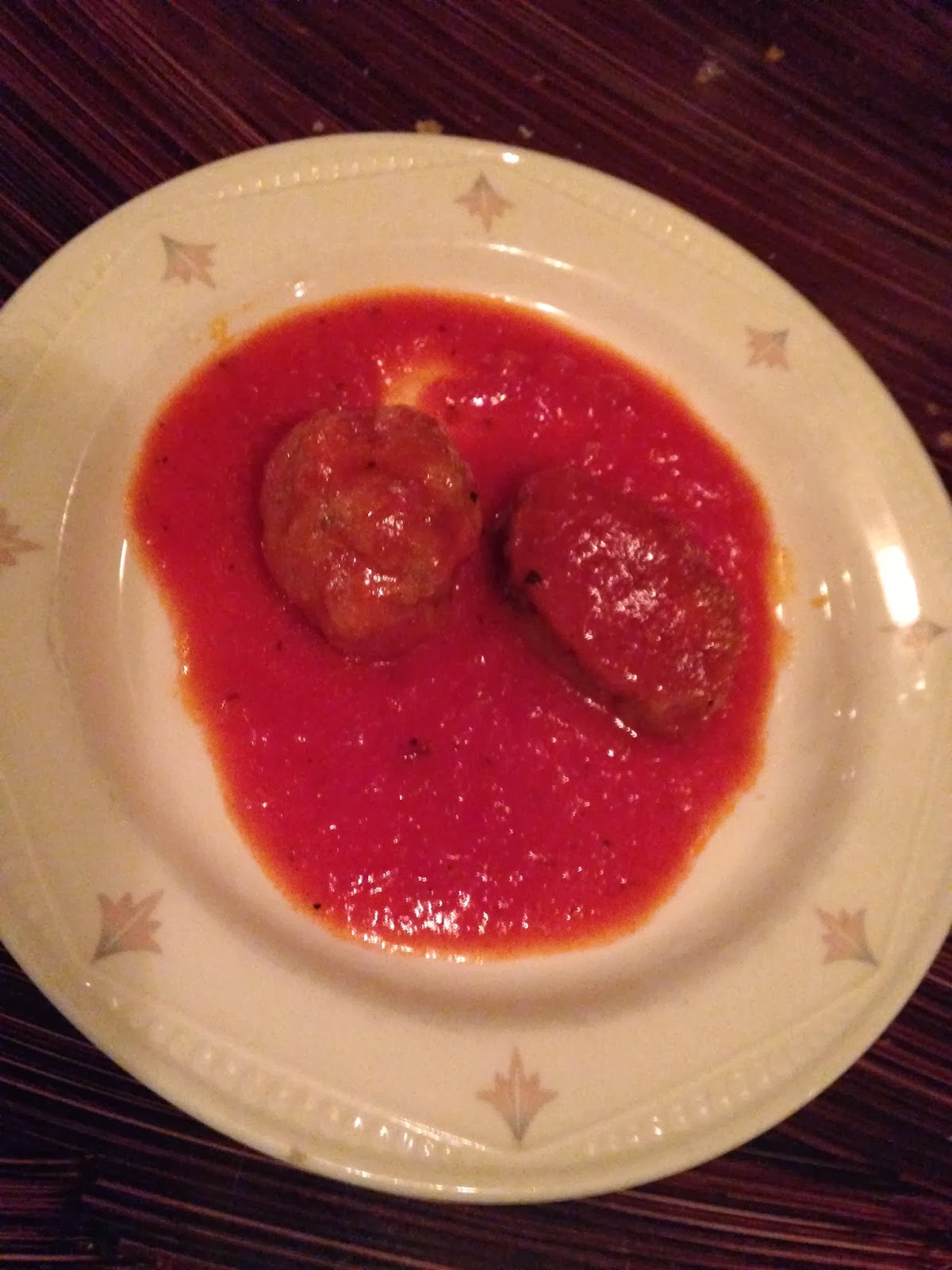 We were seated quickly by a friend of my youngest son Nick, a Snowmaking Supervisor at Keystone Resort, by the name of Kaylee whom also turned out to be our server. Entrees run from $13.95 for pizza to $25 and up for specialties AND COME WITH APPETIZER, SOUP, AND SALAD INCLUDED. That is where the concept varies from other places, in a good way and bad.

The good news is that in a town full of hungry skiers and young resort workers, a hearty meal at a fair price would work quite well, but on a Thursday night in Dillon, you could almost shoot a cannon through Adriano's without hitting a soul. They idea was good, but the execution needs some work ...

The porchetta (pronounced por-ket-a - $19.95), a traditional Italian dish of rolled, stuffed pork slow-roasted over a wood spit or grill and served with roasted potatoes, but my dish did not resemble any porchetta I have ever seen. First, our appetizer arrived, half of a cocktail size meatball and a small piece of Italian sausage smothered in a red sauce and dwarfed by the bread plate they came on. I tried to make the meatball and sausage last for more than two bites, but failed miserably. The taste was "OK", but could have been out of the freezer and can from Sam's Club for all I know.

Next came the soup, a cup of cream of vegetable that was thick, savory, and piping hot, probably one of the highlights of the night. The soft loaves of fresh, warm bread kept coming and were a nice accompaniment to the hot soup on a cold winter night. The small, side-salad was good, but minimal with a few fresh greens and shaved carrots topped with a light balsamic vinaigrette.

Back to the entrees. As I said, my porchetta did not resemble the traditional variety, but was an interesting and creative approach with sliced pork (and not much at that), onions, and ground sausage in both red and bechamel sauces, supposedly on top of baked ziti (pasta). I found the dish a bit too salty and could not find the ziti which the chef apparently forget to add.

My oldest son had the Fettuccine Alfredo with chicken ($21.95), a basic, simple dish of pasta, cream, and cheeses that is difficult to mess up. The pastas we did see did not look fresh or handmade, but straight out of the bag and I would not be surprised if the sauce came from a can or jar. I am not saying it was bad, only that it was unremarkable for the price.

Probably the best value of the night was my youngest son's Margherita Pizza (named after Queen Margarita of Italy - $13.95), a 12 inch, wood-fired, hand-tossed pizza reminiscent of Roman pizza, thin and crunchy (unlike traditional Neopolitan pizza which is soft and chewy). The sauce and cheese stopped well short of the edge, leaving a thicker-than-needed crust. The mozzarella could have been fresher, but the pizza was well put together and tasty ... BRAVO!

Toward the end of the evening a large man with a Bronco hat arrived with a friend with a Dodger cap and, based on the attention they received, they were obviously affiliated with the recent Super Bowl losing Denver Broncos. The chef, manager/owner, servers, and other staff came out of the back to fawn over the celebrities, but did not say a word to the other guests, totaling about 7-8 by then, including us. The only one we spoke to all night was Kaylee, but she did a fine job and made up for her supervisor's lack of hospitality.

With a $22 bottle of wine and three people, the bill came to just under $100 (without tip), a bit much based on the quality and substance of the meal and probably $20 to $25 more than a similar meal would have cost in Denver or Colorado Springs.

CombatCritic Gives Adriano's Bistro 7 Out of 10 Bombs ... BOMBS ARE GOOD!