Greeted by the aroma of garlic, tomatoes and herbs after 10+ hours on the road, this small restaurant in a quiet part of town and across the street from a cemetery was quite inviting to the senses as I entered. The pretty, young hostess was sweet and professional, greeting me warmly and like a fellow human being and seating me when I walked through the door, even clearing a table in the corner so I did not have to sit next to the door on a chilly and blustery late fall evening. Unfortunately, my server was not so sweet and accommodating. 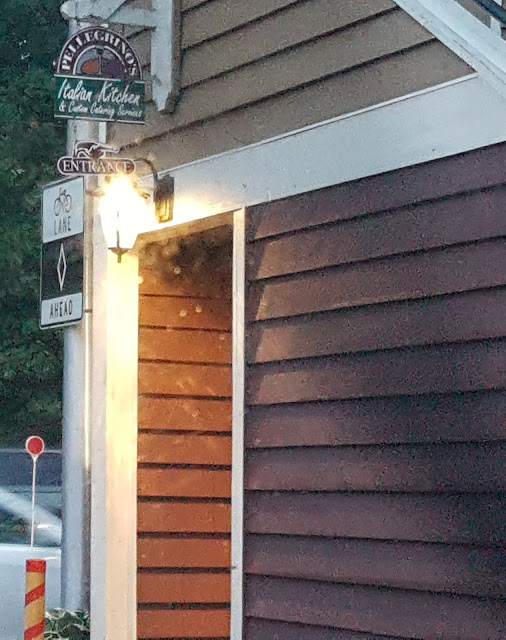 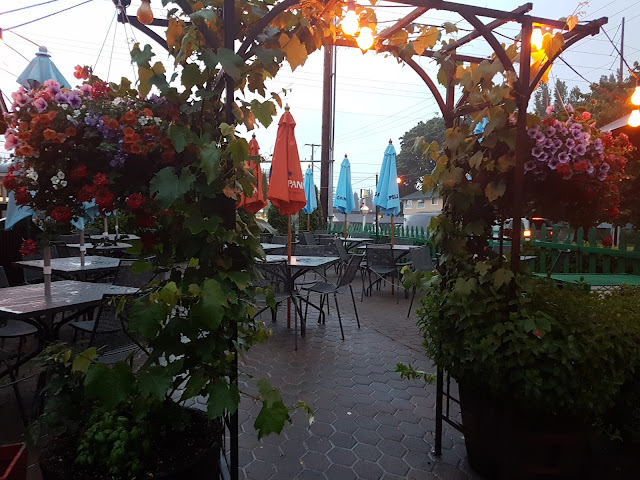 She (shall remain nameless - I only name employees when bestowing kudos) did not introduce herself, barely said a word, and looked like she would rather be anywhere but there and/or serving me. I ordered an IPA ($4.25), but she failed to tell me about the daily dinner special(s) or the Thursday 25% Off Appetizers special. Less calories for me and smaller tip for her as a percentage of the total bill. 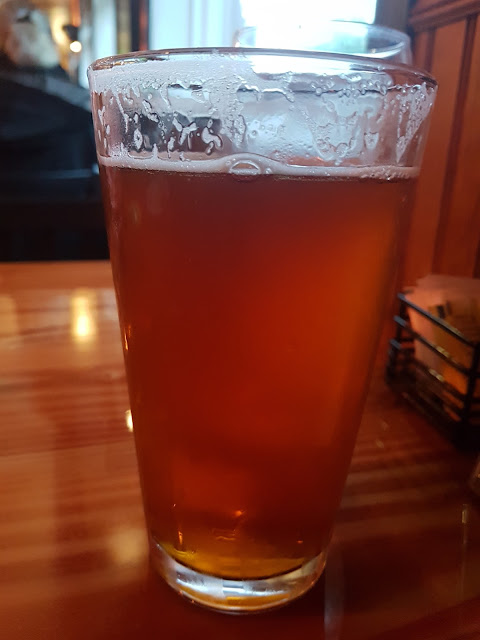 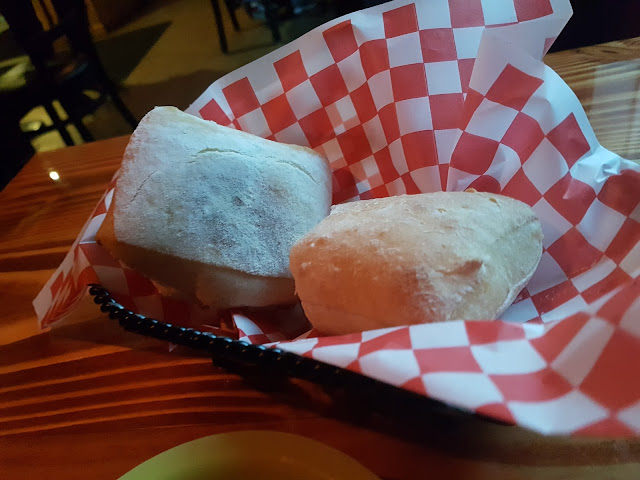 For my entree, I got the Veal Parmigiana ($17.99), asking for meat sauce (Bolognese) instead of marinara on my spaghetti. Looking at me like I had a dick growing out of my forehead at first, she then stated: "I think we can do that, but it will be an upcharge ($2-$2.50)" to which I agreed. She brought out two bread rolls and a small bowl of EVO and balsamic vinegar. The rolls were hot, looked homemade, and were quite delicious. Soup or salad were not included with my dinner. 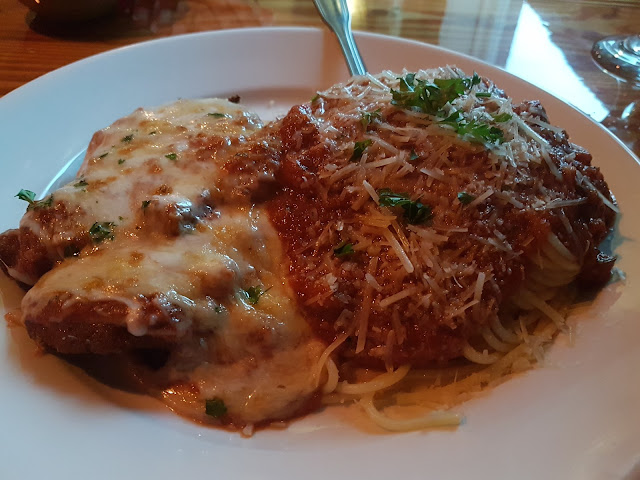 When she brought my veal, it looked quite inviting, but the pasta sauce looked like marinara, having little if any visible "meat". I tried to get her attention for at least five minutes while she farted around with a new customer and doing things in the back. When she finally came over, I mentioned the problem with the supposed "meat sauce", so she leaned over and looked at the pasta, gave me the dickhead look again, and walked away toward the kitchen. She never did return with the correct sauce, extra sauce, or even an explanation, so I ate what was there before it got cold.

The veal was very good, tender and plentiful, and the sauce was very well done with a modestly sweet, yet not overpowering flavor. There was plenty of sauce and cheese on the veal, but the pasta was rather dry with not enough of whatever sauce I ended up getting on it, so I asked for some grated parmesan. 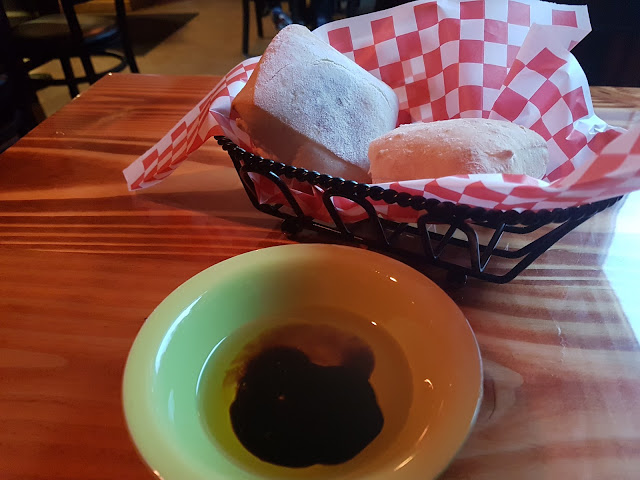 When the bill arrived, sure enough, there was the $2 upcharge for the "meat sauce" and still no explanation. If a customer complains about something, it should either be rectified immediately or removed from the bill, so I deducted the $2 from what would have been a 20%+ tip, my minimum for good service, which this was not. She probably should have received less, but she could have been having a bad day and I did not want to penalize her any more than I had to in order to get my point across.

You may think I was harsh, but being a Skinnerian, behaviorist, and former server, I know that if you reward bad behavior, the behavior will never improve and will likely remain the same if not get worse. So there you have it. If she is like most people, I doubt she learns from the experience (even after reading my review - I left my card), likely blaming me for being a cheapskate and poor tipper rather than accepting responsibility for her own failings. 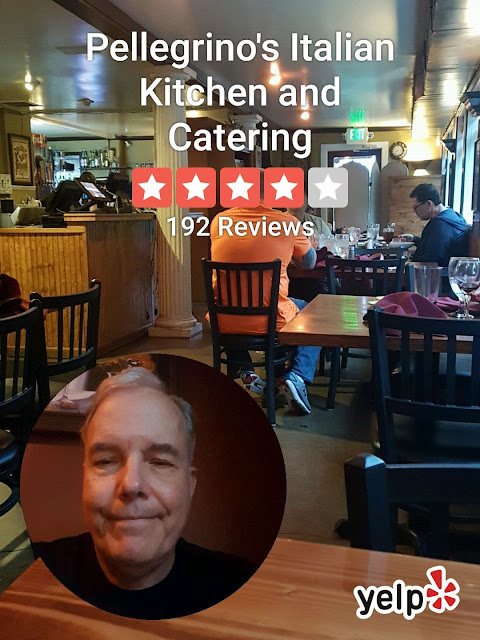 This is the kind of place I would love to have in my neighborhood if the service were better (a possible fluke in this case). Unfortunately, you can serve the best food in the most beautiful setting, but if the service sucks, the experience sucks. Too bad the kind, young hostess was not my server. So there you go, I know some may think me a "dickhead", but at least I tell it the way it is ... in my opinion.

CombatCritic Gives Pellegrino's Italian Kitchen 5 Bombs Out Of 10 With A Two Bomb Deduction For Service ... More Bombs Are Better!