Washougal, WA: Don't Run With Bagpipes, You Could Get Kilt ... And Become A Kilted Spirit


With all of the cold, modern decor and TVs, it looks more like a sports bar or restaurant than an Irish pub. The service was excellent, but that could have been because we were practically the only people in the place at 6pm on a Sunday.

They have a nice selection of draught beers at fair prices, all running $5 or less for a US pint (regular price). I had the Irish Death Dark Ale, a thick, delicious dark beer reminiscent of German bocks or dunkels ... YUMM! My buddy had one of the rotating IPAs, but I cannot tell you anything about it because he has OCD and would not let me taste it.


Their menu selections are much more limited. They have a couple of sandwiches, but they only come with their homemade crisps (potato chips) which were a bit too much on the burnt side, even for me. I would have preferred some homemade steak fries (chips) with my Reuben Sandwich ($13). The reuben was very tasty and loaded with lean corned beef and sauerkraut, but $13 is a tad high for a sandwich and potato chips - $10 to $11 would likely be more appropriate. You can also get a bowl of soup for $12 or Irish Stew in a bread bowl ($14), Bangers (sausages) and Mash ($13), or Shepherd's Pie ($14 - it is actually "cottage" pie because it is made with beef - shepherd's pie is traditionally made with lamb or mutton in the UK, so I would think an Irish pub should know the difference). You can also get a hamburger, but they only offer a 1/4 pound (4 ounce) patty instead of the 6 to 8 ounce patties most decent brew pubs offer. Finally, my friend, who is vegetarian, had a choice between a $9 pretzel or the $8 onion rings, so if you are vegan or vegetarian, you may want to go somewhere else. He went with the onion rings, a normal size order of so-so rings that would cost $4, half the price, pretty much anywhere else. 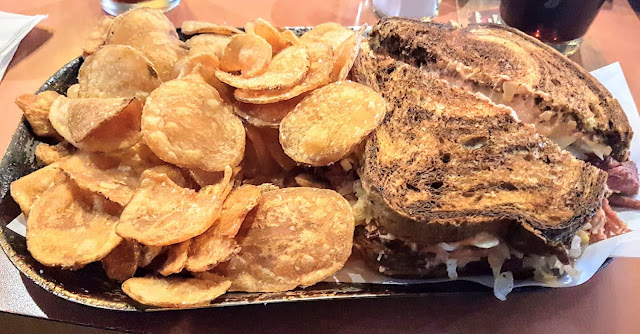 They apparently have live music on Friday and Saturday nights, so that is a plus, being the only bar in or near Washougal offering that option. I was a bit disappointed because they are not that much different than the other mediocre brew pubs/bistros in the Washougal area with similar, boring offerings and excessive pricing.  If their food menu were as reasonably priced as their beer menu, they would get a much higher rating from me. The place could also use a little charm or ambiance and some more good Irish ales, like Caffrey's, if they want to be more like an authentic Irish pub. They also do not bother offering a website to their customers, which tells me that they lack some of the basic business acumen required to be successful in an extremely competitive industry.

Title: Washougal, WA: Don't Run With Bagpipes, You Could Get Kilt ... And Become A Kilted Spirit