I tried to find something I did not like about Cameo Cafe, but I was woefully unable. In the large parking lot adjacent to Club Green Meadows, Cameo Cafe's building is obviously dated, reminiscent of a 1970s diner, and with somewhat unkempt landscaping lining the front. The interior is also dated, but serviceable. Ambiance is not a strength, until you enter the rear garden, adjacent to and overlooking one of the holes on Club Green Meadows' golf course, it is full of beautiful flowers and tables with large umbrellas ... rELaXeD! 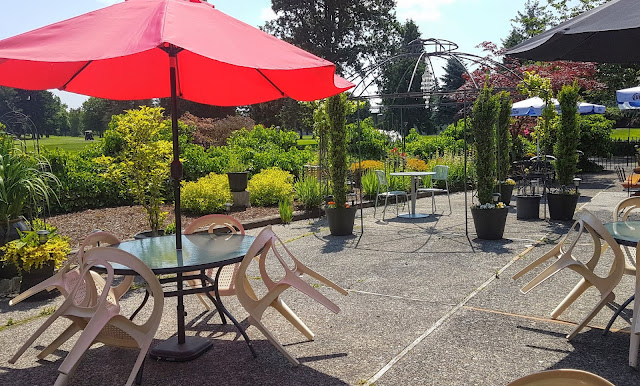 We met a friend for lunch on the patio on a perfectly beautiful spring day. Not in the mood for a cocktail from their adjacent bar, we had coffee and ice water instead. My wife ordered the French Toast ($8), I the Bacon Cheeseburger ($11.50), and our friend the Chicken Bento ($11). 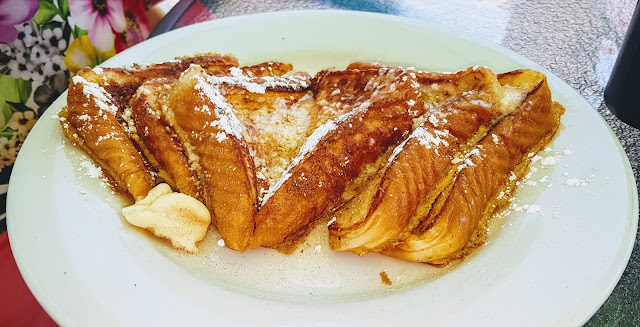 The french toast's three large, thick slices of texas toast were battered and fried, then topped with maple syrup and sprinkled with powdered sugar. My wife absolutely loved it and at just $8, it was not a bad value. 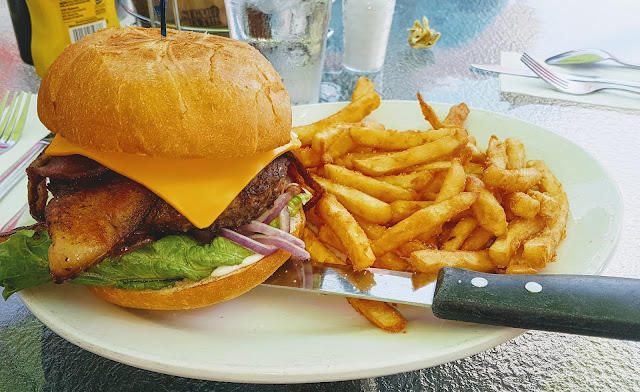 My burger was ENORMOUS, a half-pound of ground beef on a toasted brioche bun along with bacon, cheese, grilled onions, lettuce and tomato. It was one of the best burgers I have had in a long time and a TREMENDOUS value at just $11.50, including the hot, crispy fries. The french fries had a seasoned coating which I have not seen before, but they were tasty and fried to perfection as previously stated - hot and crispy. Our friend had the chicken bento, but I did not mooch a taste although he seemed as if he enjoyed it very much ... HOOAH! The service was very friendly and efficient. They opened the patio for us, cleaning off a table just because we asked if we could sit outside as it was such a nice day. 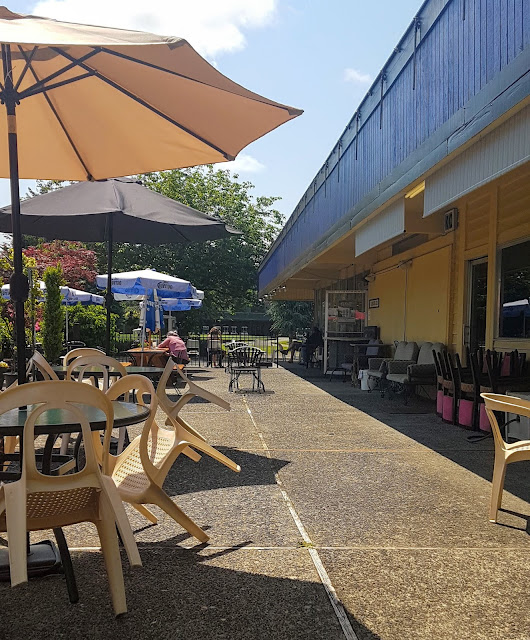 I was a bit hesitant to try Cameo Cafe because of the odd menu, a menagerie of eclectic breakfast, lunch and dinner items, including egg dishes, biscuits and gravy, sandwiches, COLOSSAL soup, fish & chips, and stir fries, among others. I am sure glad we decided to go because the perfect spring day was only that much better, accompanied by a scrumptious, filling lunch in a beautiful setting with a good friend. What more could I have asked for?