Bend, Oregon: Yelp's Top-Rated Restaurant In The U.S. (2019), Bangers & Brews Will Not Disappoint

What can I say? We happened upon this little sausage house in Bend, Oregon which also happened to be #1 on Yelp’s Top 100 Places to Eat in the U.S. 2019. You cannot find many places that have an average of 5 out of 5 stars on Yelp with over 744 reviews, so that should tell you all you need to know. 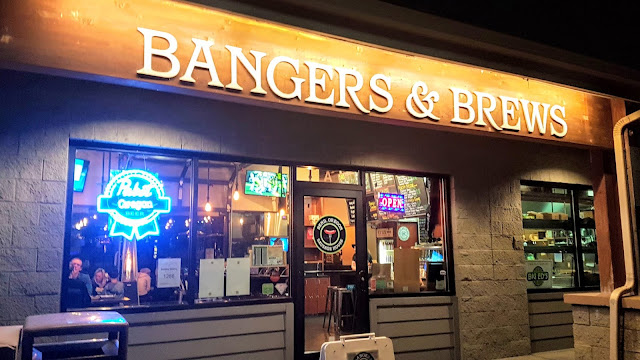 In a modern strip mall, the inside is tiny and the small kitchen takes up more  space than the dining area. Fortunately, we were able to bring our dog Kemper along with us because they have a decent size patio in the back with five or six picnic tables and about as many propane heaters where they allow pets to accompany patrons. From what we were told, they close the patio in the winter, so you may want to order online or over the phone and pick up your meal if you hope to sit and relax while chowing-down. 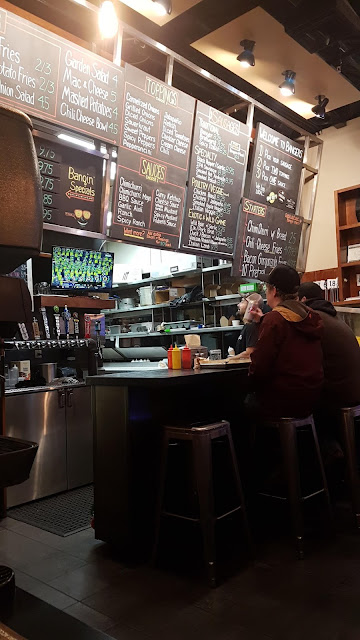 They have a large number and variety of handmade sausages, including two vegan/vegetarian varieties. Sausages include traditional bangers (UK), bratwurst (Germany), Italian (Italy ... duh!), Polish, and andouille sausages as well as a few made from chicken and exotic wild game, including wild boar, elk, reindeer, and venison. Each sausage comes with a choice of two toppings (caramelized or grilled onions, cheddar cheese, bacon, etc.) and one sauce (chili, chimichurri, curry ketchup, mustard, etc.).
The owner, a very nice and helpful man of Argentinian descent, greeted us warmly and explained the menu in detail at our table, bringing us a complimentary order of their homemade chimichurri sauce and chunks of bread for dipping. The sauce was delicious and can be purchased in an 8 ounce ($5) or 16 ounce ($9.50) jar.
We ordered a medium Chili Cheese Fries ($7) and the Sweet Potato Fries ($2), both of which were very tasty, but for $7 there could have been more fries and chili on the Chili Cheese Fries in my opinion, the only shortfall in an otherwise flawless meal.
My wife had the Veggie Apple Sausage (apples, sage, potatoes, vegetables, eggplant, onions, garlic, and hickory smoke - $8.25) on a bun with caramelized onions, cheddar cheese, and cheese sauce.
I ordered the IPA Sausage (pork, IPA, garlic, black pepper, and spices - $8.95) also on a bun with grilled onions, cheddar, and cheese sauce. As promised, it was too messy to eat with my hands, so they brought me a knife and fork. It was piping hot and delicious ... BRAVO!

The four of us ate quite well, including three draught beers, for less than $60, a definite TravelValue in this reporter's opinion. Having traveled extensively throughout the UK, Germany, and Italy during my 20-year military career, I can tell you that their sausages rival any I have had overseas, their customer service is top notch, and their prices very reasonable ... HOOAH!

CombatCritic Gives Bangers and Brews 9 Bombs Out Of 10 ... More Bombs Are Better!