Portland, OR: The Sky Is The Limit, Or So It Seems, At Zeus Cafe

We stopped by for an early dinner after a day of showing our out-of-state friends the best Portland has to offer. Having arrived at 5:01PM, our server checked her watch and let us know that we were one minute late for happy hour ... BOOAH! 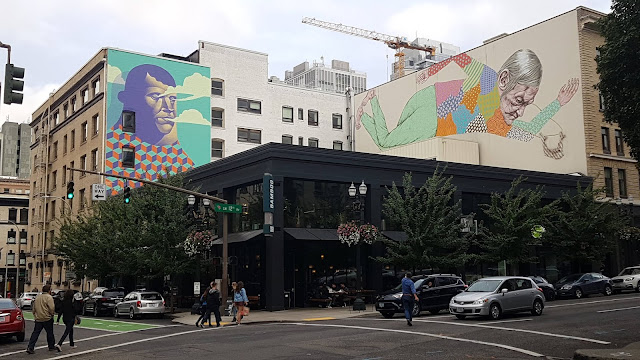 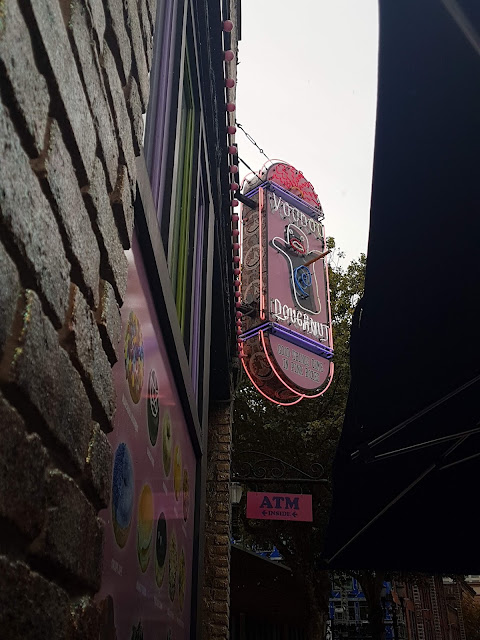 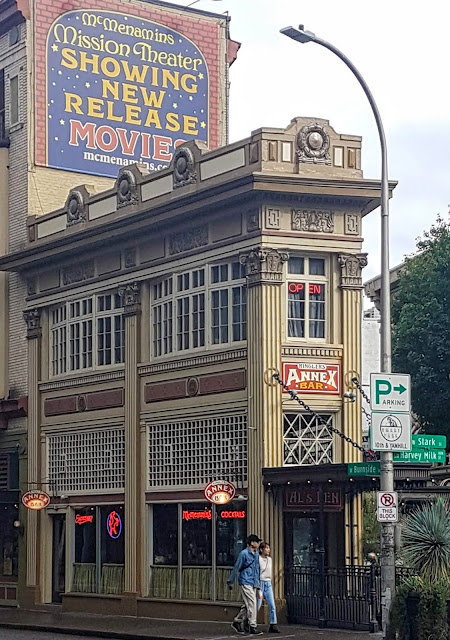 The building takes up almost an entire, albeit small, city block and houses McMenamins Crystal Hotel in addition to Zeus Café which is located on the ground floor. The building looks like it was built in the early 20th Century and the restaurant's interior, appropriately enough, has a strong Art Deco feel, warm and cozy. 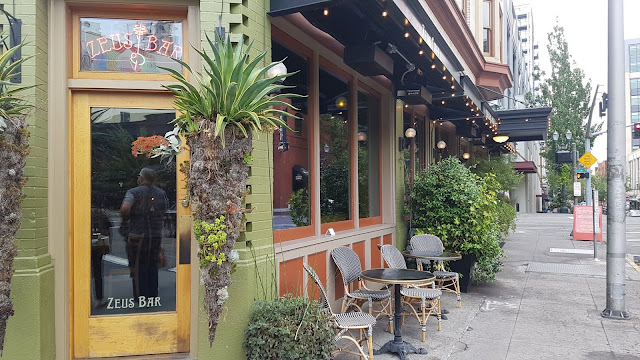 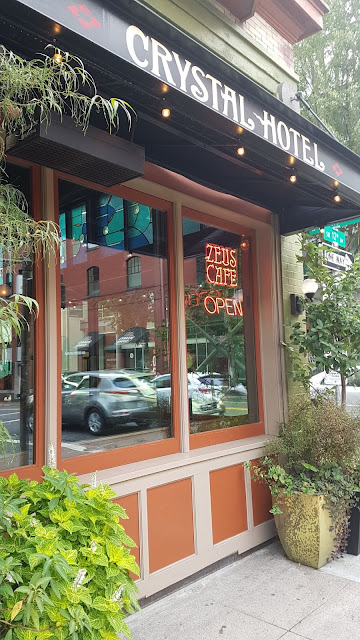 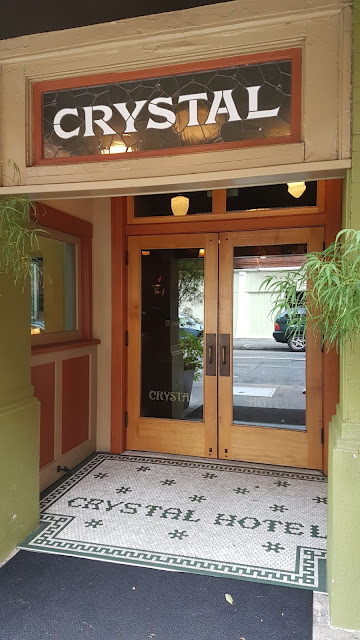 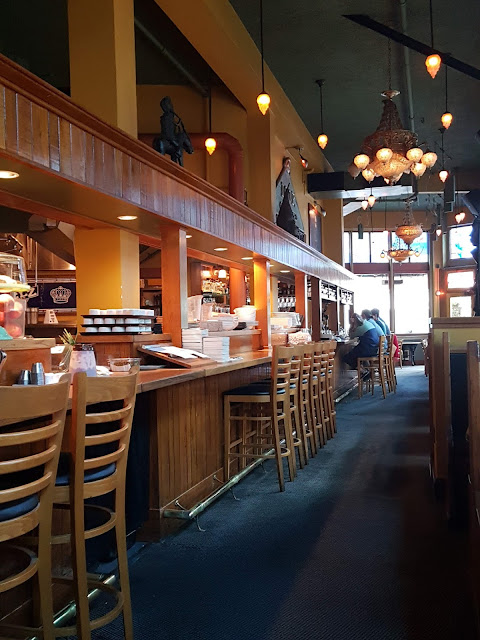 It took quite a while to be greeted by our server once seated even though we were one of three or four parties inside the large dining room. Otherwise, the service was adequate, nothing special, and not overly friendly, but not horrible. 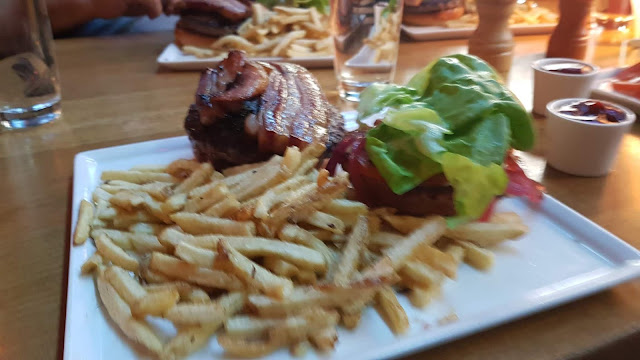 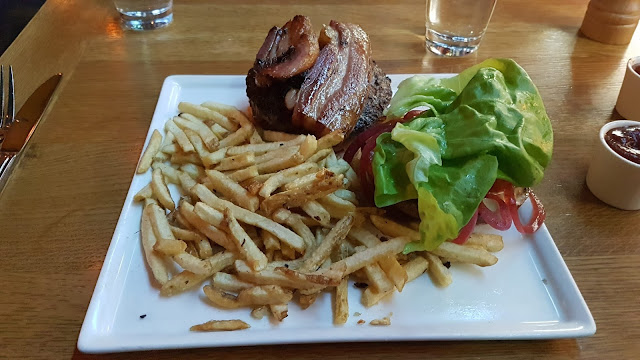 Oddly enough, we all ended up ordering the Crystal Burger, a reported "grass fed" beef patty, Tillamook white cheddar cheese, pickled red onion, and their No. 007 secret sauce on a potato bun ($14), with three of us adding bacon ($2.50). The burgers were large, juicy, and very tasty, having been accompanied by a large side of hot, crispy french fries. Unfortunately, the "bacon" looked more like pork belly and was way too thick and chewy to be on a burger (see photos). The bacon should have been one-third as thick as it was in order to be more easily consumed on a hamburger. I ended up chewing on the bacon much longer than I did the rest of the layers, so the bacon became the focus, distracting from what was a pretty good hamburger. 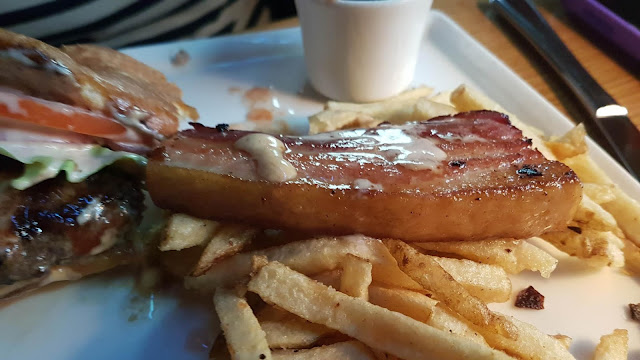 BOTTOM LINE: Good food, fair prices, so-so service, and a pleasant environment in the heart of Portland's Pearl District makes Zeus Cafe a decent choice if you find yourself in the neighborhood, whether taking in a show at The Armory, perusing the shelves at Powell's, or picking up some doughnuts at Voodoo Doughnuts.
CombatCritic Gives Zeus Café 6 Bombs Out Of 10 ... More Bombs Are Better!

Title: Portland, OR: The Sky Is The Limit, Or So It Seems, At Zeus Cafe