I am an Italian-American, was raised by first generation immigrants from the hills between Napoli (Naples) and Bari on the Adriatic Sea, lived in Italy for three years on assignment with the U.S. Air Force, and married an Italian (Sicilian to be precise), so we travel there often to see family and enjoy the wonderful cuisine.

Traditional Italian food (in the old country) only resembles what we call "Italian" here and you have not lived until you have eaten a traditional Italian meal...in Italy. Dinner in Italy normally does not start until 9PM and rarely ends before midnight. Starting with the antipasto, you may have assorted fresh meats and cheeses, prosciutto e melone (cured Italian ham from Parma and melone which is Italian cantaloupe - a traditional antipasto during the warm summer months), or, my favorite, insalata caprese (fresh buffalo mozzarella with bright red tomato slices drizzled with extra virgin olive oil and topped with fresh basil leaves). Fresh homemade bread always accompanies your meal, but you may be charged a "coperto" (cover) of one or two euros for the bread and place setting. Primo (or the first dish) is next and usually consists of soup or pasta, an infinite variety of freshly made pastas mixed with an equally infinite number of sauce combinations. All the while, you sip bottled water (with or without gas...bubbles) and some of the most delicious wines in the world, usually locally made, if not on the premises. Next comes the secondo (or main dish), usually meat or fish, simply prepared and accompanied by contorni (vegetables, potatoes, and salad...yes, salad comes with the main dish, not before your meal). Italians would never think of eating pasta and meat (or fish) on the same plate, so the traditions you see in the U.S. (e.g. Olive Garden...excuse me while a vomit a little in my mouth) DEFINITELY did not originate in Italy. Finally, a digestivo, a liquor such as grappa, amaretto, or, my favorite, limoncello, is served before cafe (what you call espresso (cappuccino is never drunk after morning and is considered a woman's drink) and dolce (dessert), usually something simple like fruit and cheese or biscotti (cookies).

My wife and I have been going to Cascone's for three years and have never had a bad meal. Some were not as good as others were, but never bad. My Sicilian spouse has grown accustomed to the American version and, even though nontraditional (in her eyes anyway), Cascone's is one of her favorites. Strong praise indeed from an Italian citizen.


We inevitably arrive on Sunday evening and the soup selection (all entrees come with soup or salad and a loaf of fresh baked bread) is very limited, rather predictable, and mostly boring..chicken of one sort or another with noodles or rice.

The salad with the house dressing (an olive oil and vinaigrette) is always good, but inconsistent. Sometimes you get olives, artichoke heart, and croutons, sometimes not. I order the blue cheese crumbles on the side and get a twist of fresh cracked pepper. Very good salad and the great bread makes up for the lack of consistency in ingredients (croutons for example). ... UPDATE ... THE NEW MENU ) AS OF APRIL 2013) IS NOW ALA CARTE (AGAIN ... WE HAVE BEN THROUGH THIS BEFORE) AND SOUP OR SALAD ARE NOW EXTRA WITH A HOUSE SALAD GOING FOR AN ADDITIONAL $3.50 WITH AN ENTREE.  INSTEAD OF GETTING THE WARM LOAF OF SESAME SEED TOPPED OF WARM, CRUSTY BREAD IS NOW A COUPLE OF PIECES IN A BASKET ... BOOOOOO!

The antipasto selection is limited and non-traditional, including the "Italian Nachos" a huge concoction that looks filling, but not appetizing. With the size of the entrees and the soup/salad, you will not need an antipasto anyway. If you do, get the steamed artichoke (when it is in-season) and share it with your guest.

I love veal and their veal parmigiana is superb. Pounded thin, lightly breaded, and pan fried, you get two large escallops on a bed of spaghetti (I order the mastacioli instead, a type of large penne). I do not like that the meat covers the pasta and inevitably have to dig the pasta out to scrape enough sauce together to cover the mastacioli, sometimes having to ask for extra marinara to cover the white bits. The servers are skimpy on the hand grated parmigianno-reggiano cheese, so I usually have them fill up my bread plate and scatter the cheese as I see fit.

EVEN THOUGH THE MENU HAS CHANGED TO ALA CARTE AGAIN, AND PRICES HAVE GONE UP, PORTIONS ARE SMALLER.  MY MASTACIOLI LAST NIGHT WAS NOT DRAINED WELL AND THE SAUCE WAS WATERY.  CASCONE'S MARINARA SAUCE IS VERY GOOD, BUT WATER, UNFORTUNATELY, DOES NOT ADD TO THE FLAVOR ... ANOTHER BOOOOOOO!

I have had the veal marsala and it is not like any marsala dish I have ever tried. They use green (bell) peppers and onions in addition to the more traditional mushrooms, a combination that does not quite work with a delicate marsala sauce. I would not bother with this dish if I were you.

The chicken spedieni is very good and bountiful, but everything comes with pasta and marinara sauce, so if you want alfredo or olive oil and garlic, which would be more appropriate, be prepared to pay extra.

The pasta dishes are good and my wife usually orders the tortelonni Savina Maria, large shells stuffed with veal and cheese in a white sauce with mushrooms, peas, and pieces of prosciutto (cannot tell if it is cotto or crudo). It is very good and enough for one very hungry person of two light eaters (be prepared to be charged if you share, they charge for everything not priced on the menu). She also likes the Pasta Asiago, bowtie pasta in a crème sauce with broccoli and mushrooms (and chicken if you want to pay extra). The Pasta Asiago comes with tomatoes, but my wife is intolerant to tomatoes (can you believe it, an Italian woman that does not eat tomatoes, drink wine, or cook!).  There are a couple pizza choices (two to three depending  on the menu) and are decent, being the single serving (one person) size and much smaller than their Naepolitano (from Naples, Italy) cousins...VERY DISTANT COUSINS! 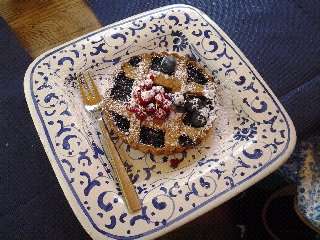 I have never had room for dessert, but the choices are traditional and look good so go for it if you have room.

The wine list (and menu) change as often my brother's underwear, so do not become too attached to any particular maker or vintage. The house wines are pretty good and come in various varieties and at $6 per glass, are a relative bargain ...

We returned for dinner on April 26th, 2013 and the menu had changed once again! THE WINE LIST IS VERY DIFFERENT ... WINE BY THE GLASS ARE NOW $8 TO $11 AND UP!  BOTTLES MAY HAVE RISEN, BUT ARE NOW A MUCH BETTER VALUE.  MANY "UPSCALE" RESTAURANTS CAN GET AWAY WITH $8 TO $11 GLASSES OF WINE, BUT CASCONE'S IS NOT THAT KIND OF RESTAURANT AND THESE PRICES ARE GOING TO HURT WINE SALES BECAUSE CASCONE'S HAS A LARGE SENIOR CITIZEN CUSTOMER BASE AND IN TODAY'S ECONOMY, FOLKS ARE NOT GOING TO PAY THE EQUIVALENT OF $60 FOR A $25 TO $30 BOTTLE OF WINE.


As I said, we have been going to Cascone's practically every Sunday for five years, so you would think the wait staff would know us by name by now. They do not. The receptionist is quite friendly and knows us by face, but do not expect to be called by name by any of the staff, no matter how long you have been going there. Service is friendly enough and things get done on time (mostly), but they do not chit chat and seem to care less who you are. After all, I am there for food and companionship with my table mates, not to make friends with the wait staff.

OUR SERVER LAST NIGHT WAS WONDERFUL AND VERY FRIENDLY AND ACCOMMODATING, EVEN THOUGH SHE NEVER TOLD US HER NAME ... THANK YOU FOR YOUR PATIENCE AND EXCELLENT SERVICE ... WHATEVER YOUR NAME IS!

CombatCritic NOW gives Cascone's (North Oak) ONLY 6 out of 1o BOMBS ... BOMBS in this case are good!

CombatCritic's BOMB ratings are based on "VALUE" ... quality of the food, service, ambience compared to the prices, so the drastic price changes in the case of Cascone's dropped their score one BOMB ... SORRY FREINDS!