If You Want to Spend Lots of Money, Take Your Car to Das Autohaus!

As is usually the case, I should have listened to my gut instinct before trusting Dave, the owner of Das Autohaus and the Scuba Shack, co-located businesses literally around the corner from our home in Lawrence, Kansas.  When I stopped by to inquire about snorkeling gear for an upcoming trip to the Caribbean and discuss hiring him as our new mechanic (having recently moved to the area), the price for a mask, snorkel, and fins that go for less than $50 (with free shipping) on Amazon.com were quoted at $99 ... HINT #1 that things to come from Dave would not be cheap!

Being unemployed, we do not have a lot of money and our previous mechanic in Kansas City was always honest, fair, and did excellent work. I knew I could trust him and he never took advantage of us, unlike many mechanics, including, in my opinion, Dave and Das Autohaus.

I took our 2000 Volkswagen Beetle to Dave for a simple check of the battery (which was losing its charge on very cold mornings) this morning, expecting a fair and reasonable estimate.  He told me that it would take about an hour to run some diagnostics. I asked him how much an oil change would be while I was there and he told me, "$60".  I told him that my last mechanic only charged me $25 (including oil, filter, checking fluids, and inflating tires) and that I thought his price was too high (HINT #2 of a rip-off ... I should have walked away right then, but I believe in supporting local small businesses), so I told him not to change the oil.

Three hours later, Dave finally called and told me that the problem was in-fact the battery, which I assumed was the case, and considering the fact that batteries for my vehicle run around $100 (including FREE testing and installation) at any reputable auto parts store, I figured it should run me $160 more or less ($100 for the battery and an plus or minus an hour, to be generous, for labor - diagnostics and installation). I asked him how much it was going to cost and he said, "that comes to a little over $280".

I thought maybe I had misheard the price, so I asked him, "did you say $280?". He confirmed the ridiculous price and I said, "I can buy a battery for $100 with free installation at an auto parts store, so why do you want to charge me $280? How much is the battery?".  He replied, "$140", to which I responded, "so you want to charge me $140 in labor to replace a battery I can get installed for free anywhere else?" He told me, "that's what it costs.  Do you know how long it takes to install a battery?"  I told him that I do in-fact know how long it takes because I installed the VW battery 4 years ago myself, taking only about 15 minutes. His "I could care less" and aggressive tone of voice ticked me off, so I told him I would be right over to collect my car.

When I arrived, he insulted me further by saying that the car had not been well maintained and, in an attempt to up-sell someone who was not going to fall for his BS in any event, that I needed to replace the timing belt.  I told him that the timing belt had been replaced less than 70,000 miles ago and that the VW had been well maintained, changing the oil every 5,000 miles even though recommendations are to change diesel oil every 10,000 miles and making all RECOMMENDED and NECESSARY repairs (from our honest mechanic). 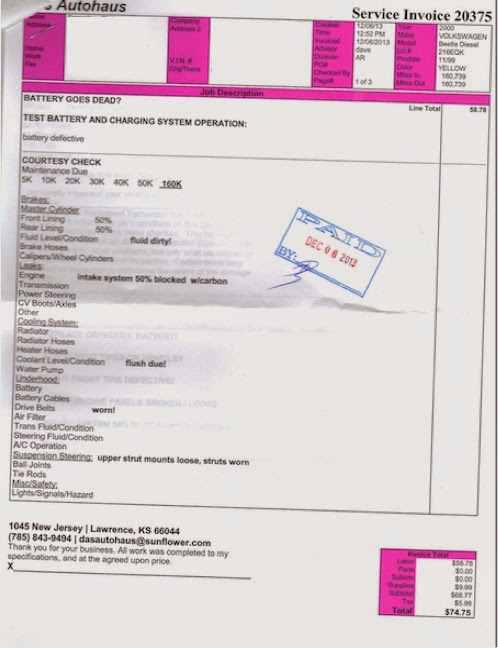 As you can see from the invoice, he not only overcharged me for the labor involved with the estimate, HE CHARGED ME $9.99 FOR SUPPLIES?  What supplies could he have possibly used to test my charging system?

Having spent my Air Force career as a transportation officer and responsible for hundreds of auto mechanics (and the Best Transportation Squadron in the United States Air Force), I know how repair costs are calculated, so I asked Dave how much his hourly rate was. He said, "I work by the job, not by the hour", so I knew he was not on the up-and-up. In comparison, here is a quote from AutoMD.com for the exact repair on my vehicle and as you can see, it is MUCH closer to my estimate than his:

I took my car to Walmart (invoice below) a few days later. They tested my charging system FOR FREE, CHARGED ME ONLY $109.97 FOR THE BATTERY, and INSTALLED IT IN ABOUT 20 MINUTES FOR FREE ... for a total of only $124 and change! Adding in the $75 Dave charged me for doing practically nothing and the grand total came to $200, SO I STILL PAID $80 LESS THAN DAVE WAS GOING TO CHARGE ME even though I should have paid over $150 less if I had been dealing with an honest person. 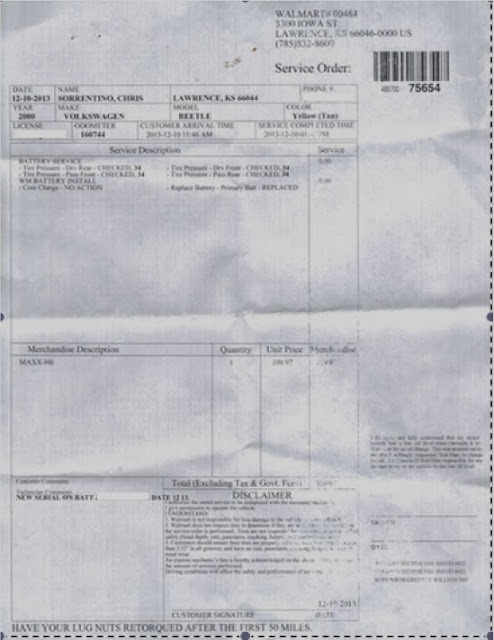 Mechanics are notorious for taking advantage of uneducated customers as we have all seen on shows like 20/20 and 60 Minutes, but there are good, honest people out there as our last mechanic proved over the last five years. I assumed, and you know what happens when you "ASSUME" ... YOU MAKE AN "ASS" OF "U" AND "ME", that Dave would be fair and honest, knowing very well that this was the first time I had been there and possibly trying to "do the right thing" by a new customer. In my opinion, Dave obviously has no idea what the "right thing" is or what "integrity" entails, so if you have more money than you know what to do with and do not care how much a service costs, by all means go to Das Autohaus! I did not realize how good I had it with our last mechanic, but maybe it is worth the 40 minute drive not to find out how many crook mechanics there are in Lawrence, Kansas!

CombatCritic Gives Das Autohaus 1 Out of 10 Bombs ... Bombs Are Good!

UPDATE: Since this debacle, several people (friends and strangers alike) have come forward with stories of their own about Dave and Das Autohaus. It seems as though he has an unsavory reputation in Lawrence, a reputation I wish I had been aware of prior to trusting him with my car. So I am sharing my story and opinion with you in the hope that I can spare some of my neighbors from a similar experience. Take heed and pass the word along so that others will not be victimized by this unscrupulous business owner.

This review is based solely on my opinion and what I believe to be true based on my direct experience with the service(s) in question. Readers should take these facts into consideration when deciding to utilize a service (or not) and that my opinion may or may not reflect the true nature and/or character of the individuals and/or institutions being reviewed.
Author: CombatCritic at 3:15:00 PM