Nonna Cucina Rustica Serves Food My Grandmother (Nonna) Would Be Proud Of! 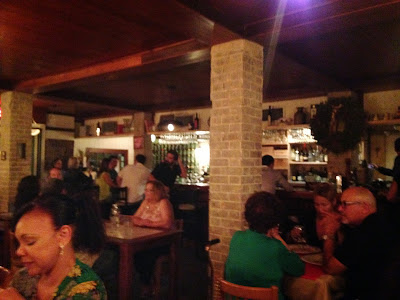 San Juan: Nonna Cucina Rustica Italiana is very nice, somewhat small, slightly upscale classic Italian restaurant near downtown and not far from Miramar where we were staying. We found her on Yelp* and the reviews were very positive. We had difficulty finding a restaurant open on Christmas Eve when we arrived in San Juan, so I figured that Christmas day would be even worse. To our surprise, Nonna was open (as were several restaurants we saw - everything else was closed as they should be) and had a table available ... "we'll be right there!"

Waze, our eMap, was a bit off, so we called the restaurant and the manager guided us in (a couple blocks ahead of where Waze took us), sticking her head out the door until she spotted us pulling up. They have Valet Service, but we decided to go through the next signal and found plenty of street parking in the next block.

It is nearly impossible to find a traditional Italian kitchen in the US and we were expecting as much in Puerto Rico ... WE WERE VERY PLEASANTLY SURPRISED!

Carmen, our server, was extremely pleasant even though, still being on "non-island time" and expecting things to move rapidly like they do on the continent, we were hungry and a little impatient to start. I ordered a Spanish Alicante red, a simple yet robust dark red wine ($27), to accompany our meal.

For antipasti, we had the veal polpette (meatballs) and homemade mozzarella, and both were excellent. The polpette (3 for $9 - polpettone, by the way, is Italian meatloaf) came atop a bed of mashed potatoes (polenta would have been a more traditional and excellent choice) and covered with a light tomato sauce. We had to ask for bread and it took a while to arrive, a very small basket of what looked like foccacia sliced into small pieces, and the only disappointment of the night. Local bread on the table is standard in all Italian restaurants, even in Italy, so when I did not see bread on a single table and had to ask for it, I was a bit surprised. It was decent, but too little to accompany the wonderful appetizers, both of which cried out for bread, good bread!

The homemade mozzarella was also delicious. Atop the four rather small, thin slices ($9) of mozzarella were three large cherry tomatoes, a few pieces of arugula, and a hefty dose of olive oil, balsamic vinegar, and chopped, toasted hazelnuts. A kind of insalata Caprese, you would never see balsamic vinegar on mozzarella in Italy, but it was very tasty if not filling.

The Casoncelli alla Bergamasca ($17), a light yet complex dish of pasta shells (the size of perogi) was stuffed with sausage and quickly sautéed in a mild butter and sage sauce. They were sublime, the only fault being that the obviously homemade pasta shells were a bit too "al dente" and could have been boiled another minute or two. Otherwise, we were quite pleased.

I ordered the lasagna ($18), which came in its own 7" x 7" baking dish with a crispy layer of cheese and béchamel sauce and it was exquisite! More than I needed to eat, it was layered with a hefty portion of minced lamb, lasagna noodles, spinach, and ricotta and mozzarella cheeses. The lamb tasted very much like lamb, so if you are not into lamb, DO NOT order this dish. I like lamb on occasion, not daily, and was very happy with my choice.

For dessert, offered by the very sweet, young pastry chef with a huge smile, we had the tiramisu. Untraditional in every way, I had seen it on other tables throughout the night and thought it was an ice cream sunday, but it was not! All of the usual ingredients were there, cookies, mascarpone cheese, and cocoa (accompanied by a shot of espresso to pour over the top), but a scoop of ice cream was also included along with chocolate syrup. It did not taste like any tiramisu I have ever eaten (and at $12 it was the most expensive tiramisu I have eaten), but it was extravagant.

Not cheap by any stretch, Nonna was a delight and extremely good value ... BUONISSIMO!