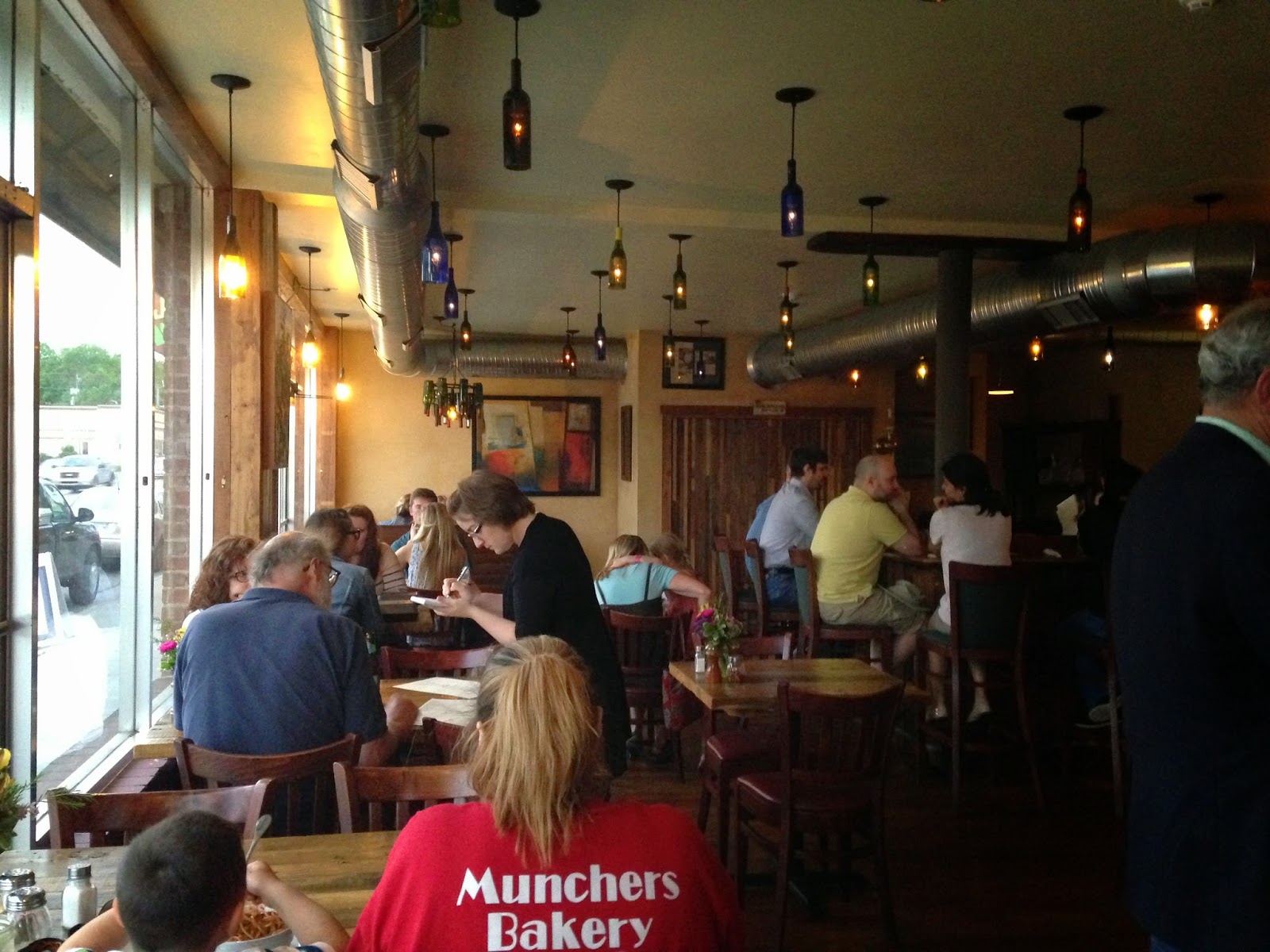 When I was told by a Lawrence Bohemian acquaintance of mine that "the Basil Leaf Cafe has the best Italian food in Lawrence", I was intrigued because we have yet to find a great restaurant of ANY kind since moving here in August. Paisano's (reviewed in August 2013) is "OK", but nothing to write home about, so our quest to add a new Italian restaurant to our arsenal continues.

Enter ... The Basil Leaf Cafe. Yelp reviews are mostly positive with people raving about the food, but slamming the "gas station" decor of the previous location (it really was in a gas station). The new building sits in a row of shops on 9th Street not far from downtown and the University of Kansas campus. The decor is modern with a smattering of tables (about 8) in a room that could easily handle 12 or more. The arrangement of tables, bar, kitchen window and cash register is inefficient, appearing as though there really was not a plan in the first place.

On our first visit, we sat at a table uncomfortably close to the front door and were quickly greeted and given menus. I ordered a glass of the house wine, a "primativo" that was aptly named being primitive and obviously cheap. At $6.00 a glass, I would not be surprised if the mark-up was in the 600% to 700% range. The glass was small and filled a little more than halfway, leaving four, maybe five, ounces ...

I ordered the New England (the white variety) clam chowder, the tortellini cordon bleu, and a side of meatballs. After asking for water three times, my wife finally received hers, but I had to ask yet again to get mine, coming in a mason jar for some odd reason. This restaurant is apparently trying to find an identity with its' eclectic menu, modern decor, and new location, but they obviously have not figured it out yet. The soup finally arrived just seconds before our

Having lived in Italy for three years and traveling there extensively over the years, I found that Italians would NEVER think of eating meat and pasta together. Basil Leaf's menu is not even close to authentic Italian. Meat loaf? Yes, Italians actually eat meat loaf, calling it "polpetone", literally "big meatball" (meatballs are called polpette in Italy). They eat meatballs too, but NEVER WITH SPAGHETTI!  Spaghetti and other pasta dishes are called "primo piatto" or "first plate" and are also referred to as "primi" for short. Meat dishes fall into the "secondo piatto" or "second plate", aka "secondi" and are not brought to the table until the antipasto (appetizer) and primo have been consumed.

Anyway, the New England clam chowder came in the smallest soup cup I had ever seen and was filled a little more than halfway. I asked the server if I could get some bread with my soup, but she said "the bread sticks come with your entree". Translation: "No, you cannot". Fortunately, the entrees arrived just seconds after I got my soup, so it did not take long to consume it and prepare for my oversize entree.

I had heard good things about Basil Leaf's tortellini cordon bleu on Yelp, so I had to try it. The presentation was well done, being served in an oversize bowl (see photo). I love veal and schnitzel (pork cutlet) cordon bleu and this dish actually came close in terms of taste. Nontraditionally covered with a chicken cutlet (something you would never see in a classic Italian restaurant), the dish reminds me of a carbonara with ham and cheese added. It was delicious, but would have been better had it been served fresh from the pan and hot (warm). I finished half of the pasta, the lone bread stick (cut loose folks), and one of the three meatballs, leaving me a hearty dinner for the following night. The meatballs were excellent, having the correct consistency and seasoning and obviously homemade. Kudos to the chef!

My wife ordered the "mac and cheese", another heaping helping of handmade pasta reminiscent of my Aunt Gina's chicatielli from Ariano, Irpino (Italy). The sauce was creamy and rich, but not overwhelmingly so. Being a native Italian born in Sicily, her palate is well honed when it comes to pasta, an Italian staple. She liked the mac and cheese even though there is no such recipe in her homeland.

Basil Leaf Cafe left us unimpressed on our first visit. Maybe it was because of the hype, maybe a bad night, so we decided to return.

On our second visit, seven months later, we skipped the appetizers, soup, and salad as they are overpriced and unnecessary based on the size of the entrees. A Thursday night, we were surprised to see only one free table and were quickly seated although the hostess seemed confused after I asked for a table for two as my wife had not yet entered the building. Before she had the menus, my wife had arrived and we were seated.

Our server was very nice, but a bit pushy when it came time to order as she seemed in a hurry to get things rolling and ensure our tab was of sufficient size. When we were finally ready to order, I decided on the Penne Abruzzi and my wife, not a pioneer by any stretch, went with the Mac and Cheese ... again. 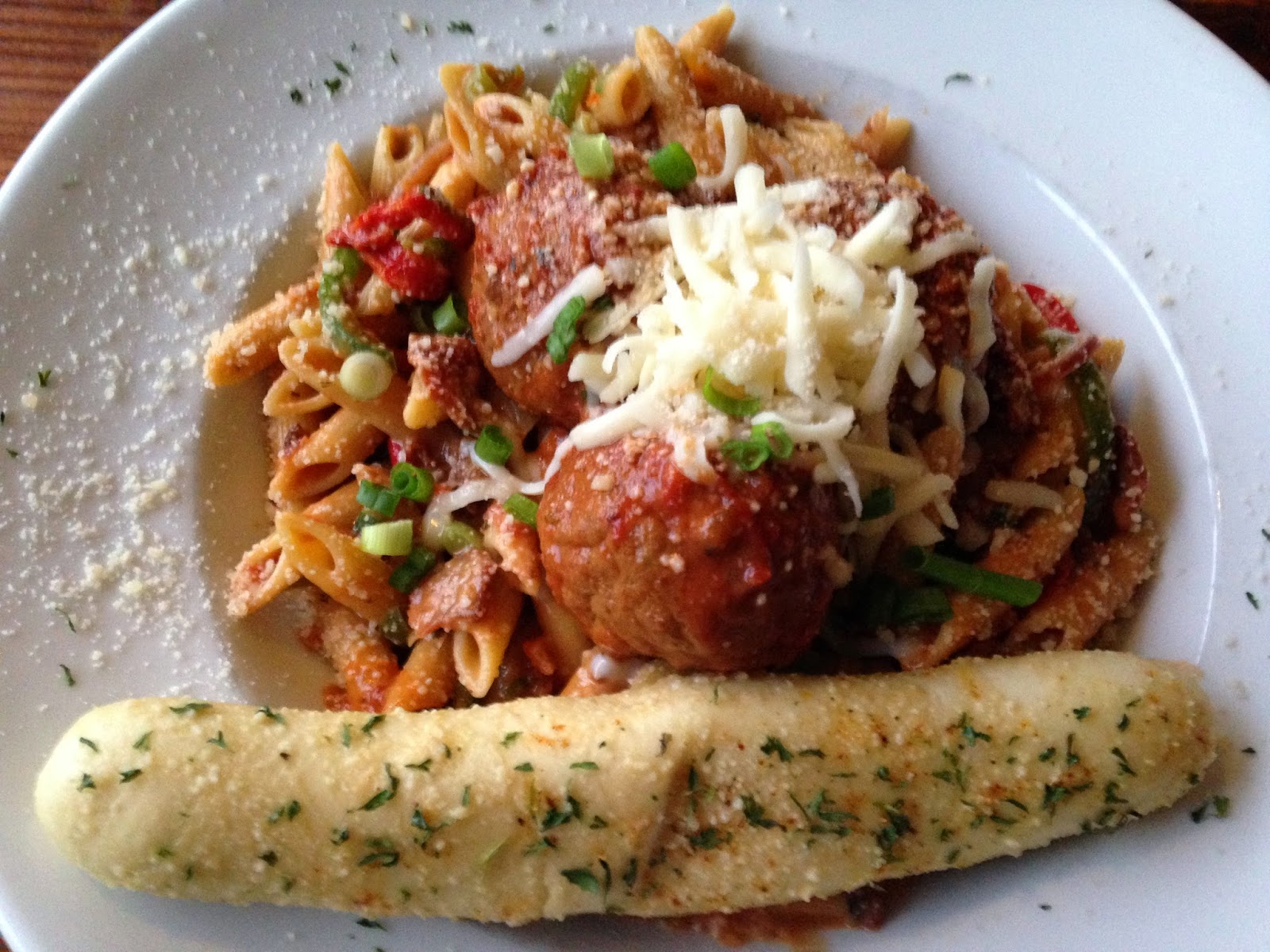 The Penne Abruzzi has penne, obviously, with onion, bell peppers, sun dried tomato, and bacon in a three cheese sauce. I have no idea which three cheeses they use in the sauce, but it was tasty enough although a bit too salty for my taste, possibly a result of the sun dried tomatoes as they are normally sprinkled with salt prior to being dried. There was too much sauce for the amount of pasta, giving it the consistency of a thick soup, appropriate for pasta fagioli, but not a standard pasta dish where a light coating would suffice. The bacon added just enough flavor to the dish and the three large meatballs sitting atop the penne, something you WOULD NEVER SEE in Italy, were decent.

I asked a server if I could have a menu as we left, but was told "we only have them available online". That was fine with me as I am not interested in killing trees, but when I went "online" to check the menu to complete this review, I had great difficulty finding a current menu and never did find a website. How a business can succeed without a website these days is beyond me, but Basil Leaf apparently believes they only need a Facebook page. I never did find a current menu after an exhaustive search (MenuPix had a menu with prices several dollars less than we paid) and the Facebook menu never did load. That is what you get when you trust your "free" business webpage to Mark Zuckerberg!

The pasta dishes, "starters", and salads are overpriced ($9 for a house salad? - up from $8 last October) as was the wine ($7 for 4 ounces of cheap wine - up from $6). The decor still needs some warming up, and the tables could be rearranged to seat more customers or create a much needed waiting area (waiting customers now hover over tables of seated customers). The service was sketchy on our first visit and a bit too intense this time. The menu and food remain underwhelming. I spotted only two or three dishes on the limited menu that I would bother ordering, so our options for return visits are already limited.

There are enough "classic" Italian pasta sauce recipes to fill the menu twice over (carbonara, amatriciana, ragu, bolagnese, boscaiola, marinara, alfredo to name a few) and some classic meat dishes (veal marsala or saltimbocca) would be nice, so embrace something ... anything ... and create an identity of your own in your decor, servers, and menu fit for a town that still does not have an Italian restaurant worthy of our custom.