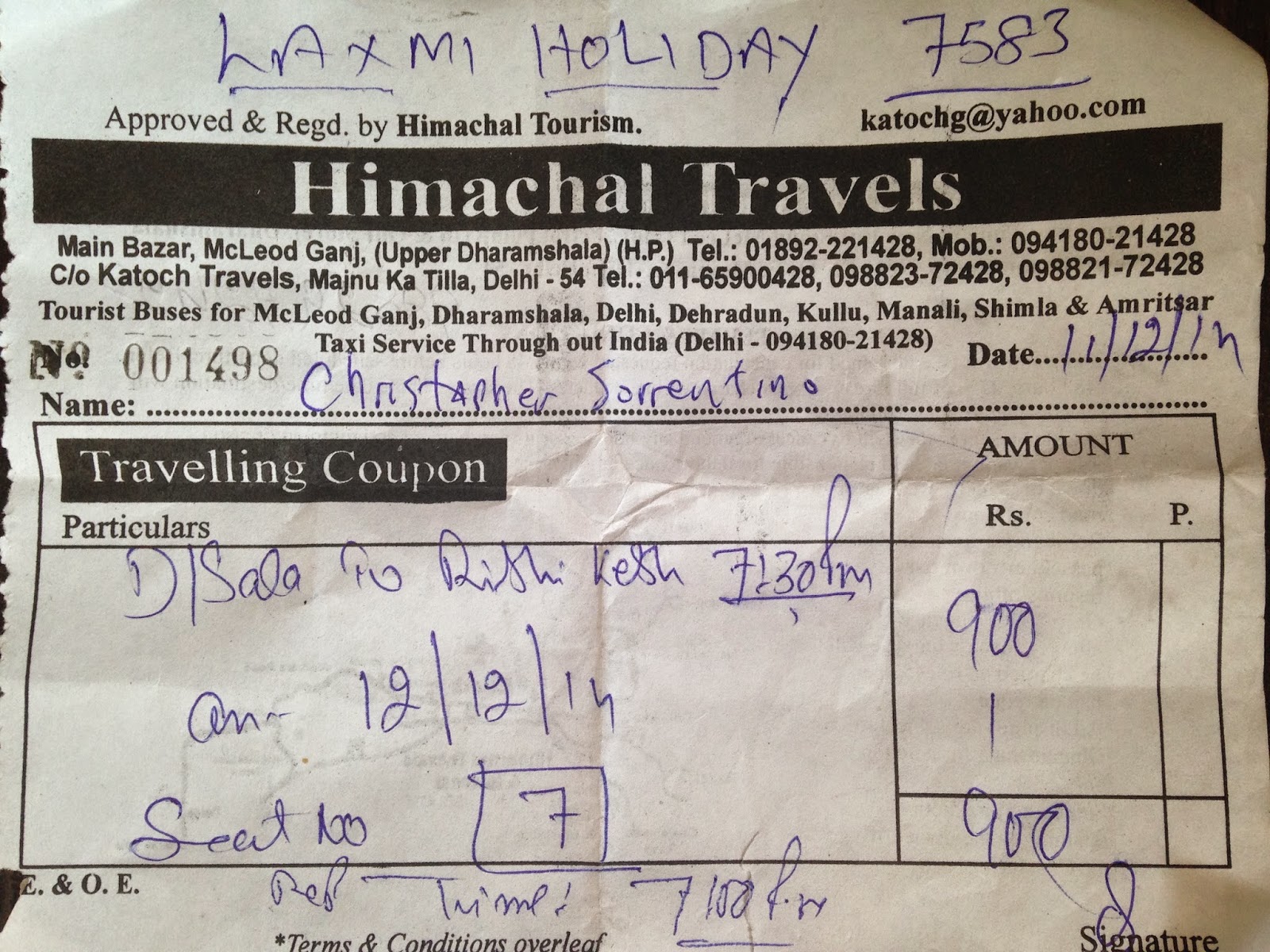 I booked my ticket a day early, originally planning on leaving Saturday night (December 13, 2014), because the bus was fully booked for the 12+ hour trip from McLeodGanj (Dharamsala) to Rishikesh, paying 900 rupees ($14.40) in advance. As you can see from the above receipt (ticket), I was assigned seat number 7 when the owner called and made my reservation 33 hours before scheduled departure.

I said all of my goodbyes during the day and was walked to the bus station by three friends, but when I arrived at the Laxmi Holiday Bus #7583 as instructed, my ticket was taken and a long phone call ensued. Ten to fifteen minutes later, the driver told me "you do not have a seat on this bus", pointing to a seating chart he added "see, someone else has your seat, you cannot go".

I threatened to call the police, then contacted the owner of Himachal Travel where I had bought my ticket. He came down to the station and unsuccessfully tried to get me on the bus as I watched my transportation drive off into the sunset with no backup plan. Because I had already vacated my room and had a hotel reservation (paid in advance) in Rishikesh the following night, it was imperative that I get out of Dodge ASAP.

The owner and ticket issuer told me that there was a bus leaving for Dehradun, about an hour away from Rishikesh, at 8PM (about 50 minutes later) and asked if I wanted to take that bus. He told me that it would be a semi-sleeper with chairs that recline, so I said "OK", understanding that I would be slightly inconvenienced, but comfortable ... WRONG!

When the bus hastily arrived, it was NOT a semi-sleeper, but a "local" bus, the kind you take across town, not across the country and a dingy, dirty one at that. There were no reclining seats, only hard, cramped plastic ones and I weighed my options as I considered the 12+ hour journey and its impact on my disabilities. I decided to take my chances rather than wait another two days for the next available bus, paying 535 rupees ($8.60) for the one-way ticket.

I got ZERO SLEEP that night, departing at 8PM and crammed in next to two young girls on an overloaded bus that made stops every 30 miles on a nearly 300 mile journey, and with NO HEAT ... I was freezing the entire time!

When I finally arrived in Dehradun at 11:30 AM the next day, I was dropped off on a road with no bus station in sight. Fortunately, there was a very nice Tibetan couple on the bus that took me under their wing, helping me to navigate a route with no English speakers (hey, I thought English was the "national language" in India!) and finding a bus to Rishikesh (51 rupees/83 cents). I had to pee for the last hour and a half, but could not risk relieving myself in Dehradun for fear of missing my connection to Rishikesh, so I sucked it up for the one and a half hour trip (40 miles) ... HOOAH!

I finally arrived at my hotel at 1PM, 17 hours after my departure, slightly hypothermic and extremely sleep-deprived, but alive. Oh well, another adventure in the life of CombatCritic!

CombatCritic Gives Himachal Travels 1 Bomb Out Of 10 For Their Failure To Get Me On The Bus I paid For And 16+ Hours Of Torture ... More Bombs Are Better!