Goa, India: You Will Not Find A Better Accommodation Value ... Casa Praia Is THE BOMB!

With a dearth of available options over the New Year 2015 holiday in Goa, a last minute cancellation gave us an opportunity to book a room at Casa Praia (4,000 rupees/$64 per night), a relative bargain at a property with an unprecedented 9.9 rating on Booking.com and 5-star rating on TripAdvisor.  I jumped on it and am I glad I did! 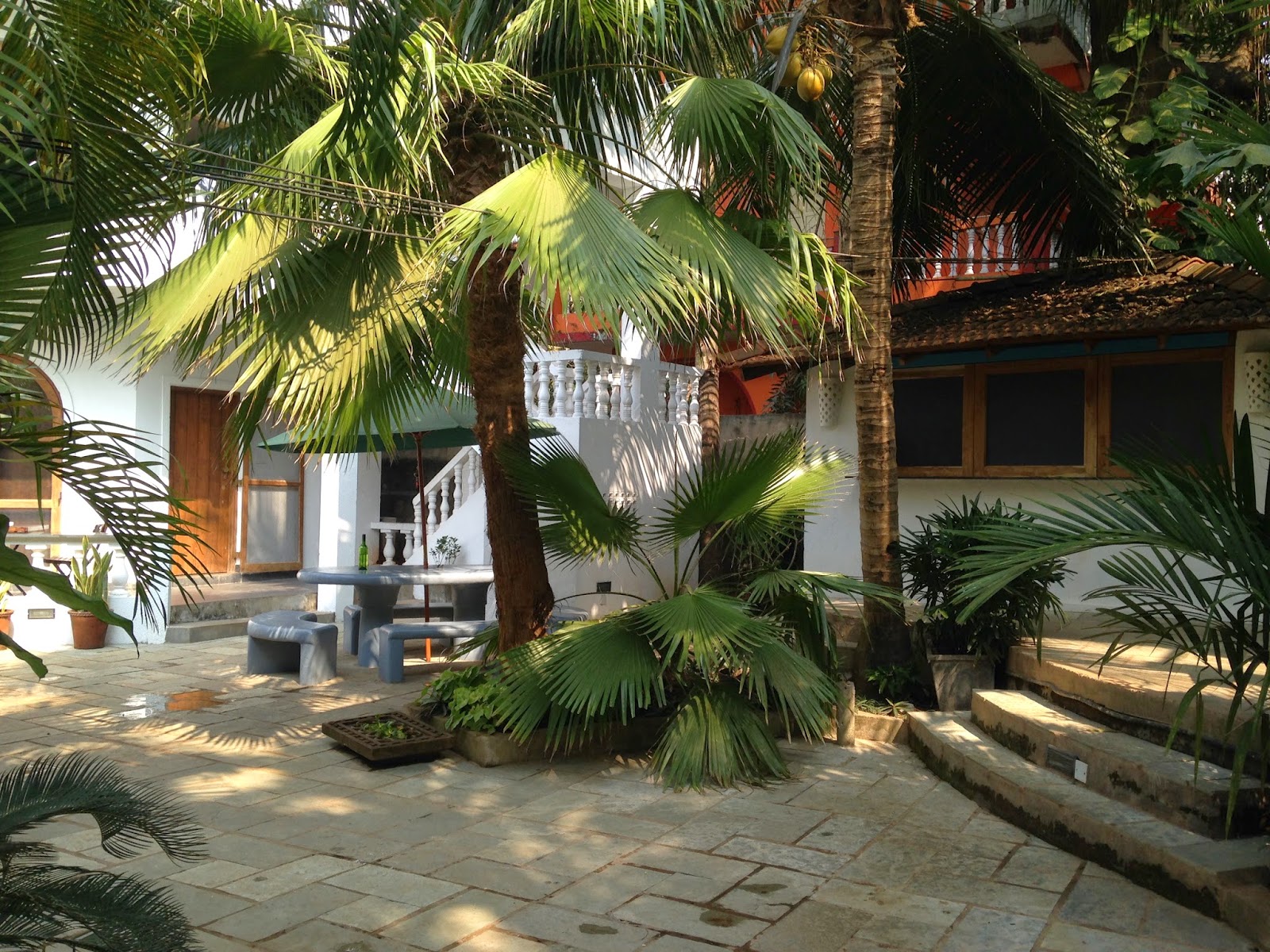 4,000 rupees per night will get you a 3 or 4-star hotel in many places in India, but Goa is unlike anywhere else in India thanks to supply and demand, and hotels and taxis are at least triple the price of anywhere else I have been (Dharamsala, Rishikesh, New Delhi, Jaipur, Pushkar, Cochin, Varkala). But this is Goa, Candolim Beach in particular, a beachside party town packed to the gills with Russians and Brits ready to party, and just two budget-minded Americans that I knew of … my wife and I. 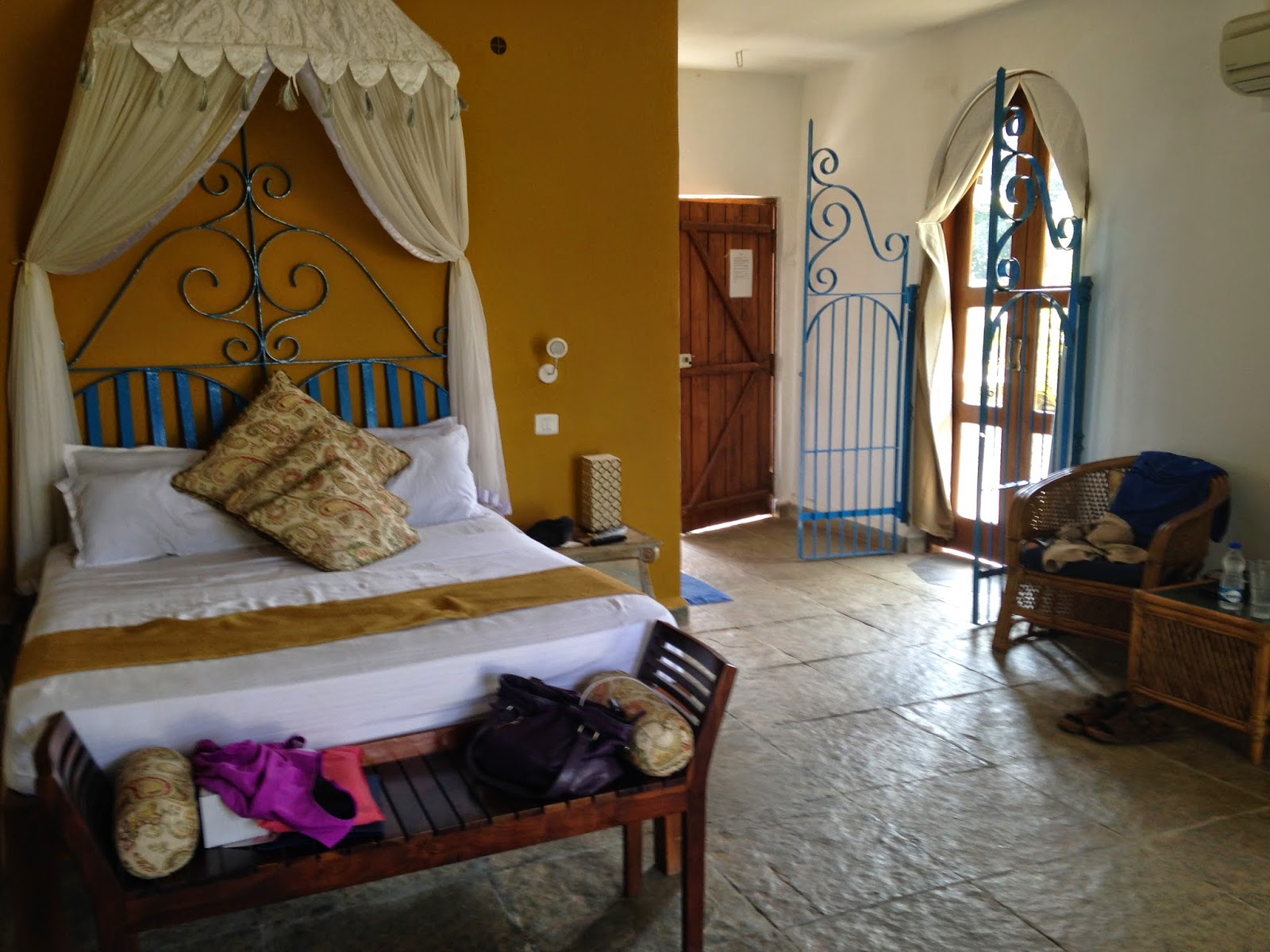 Paul (or “Hardip” as he likes to be called) and Sophia, the owners and hosts of Casa Praia, greeted us by email immmediately after our booking and offered to send a taxi to meet us at the airport at the standard government rate of 1,100 rupees ($17.80), so we took them up on it as their property is an hour’s drive from the airport and the hotel/guesthouse is somewhat secluded and not easy to find. Our driver met us outside the terminal as promised with sign in hand and we proceeded to Casa Praia.

Being early evening on New Year’s Eve, Hardip, Sophia, and some other British guests (Brits) were sitting around the pool enjoying a beverage and chatting, and after showing us to our room we were invited to join in the celebration. We enjoyed a wonderful night of conversation and commaraderie with our new friends and former rivals, the Brits plus one Swede (Sophia). 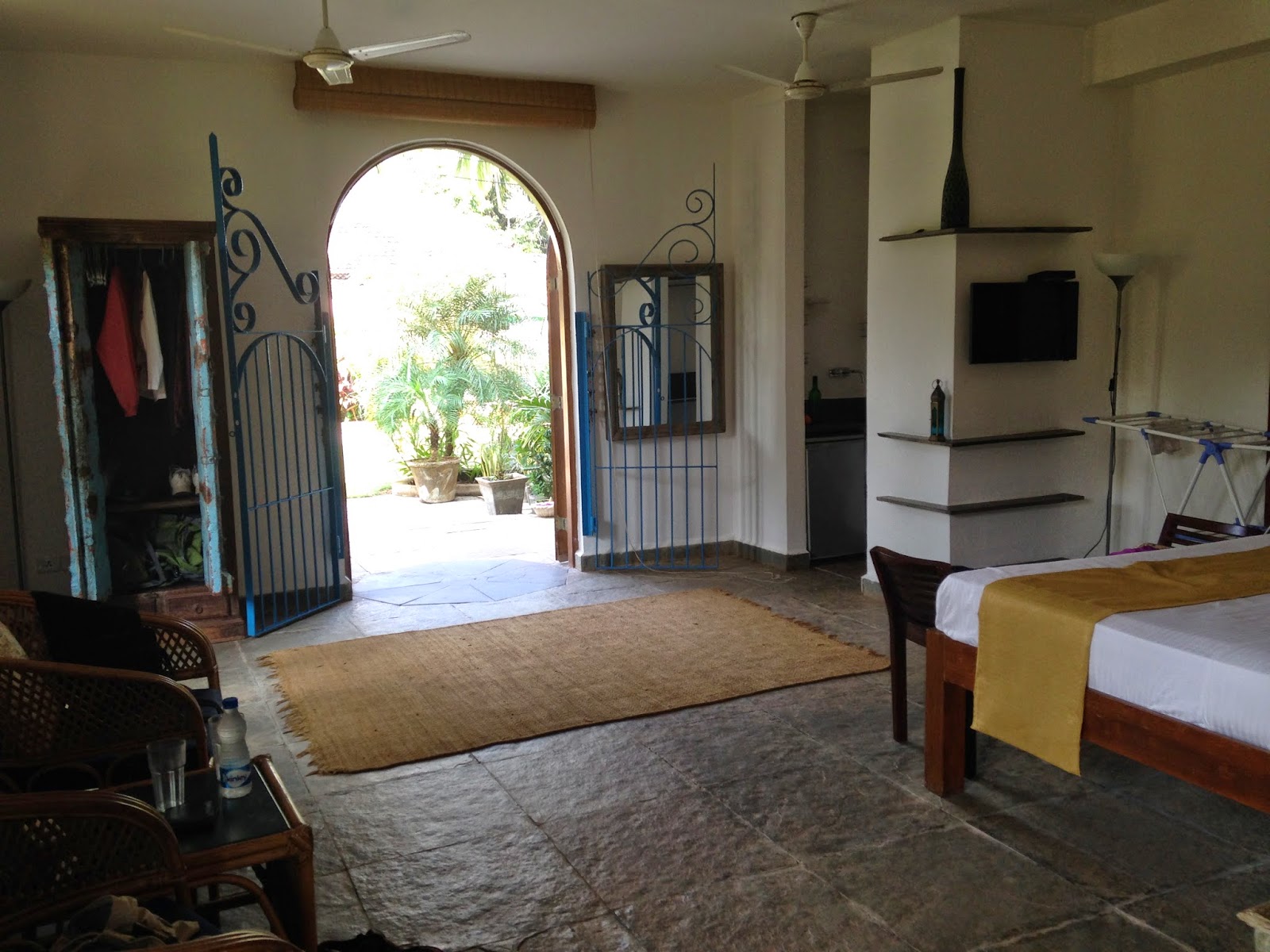 Our room was large, well appointed, and very tastefully decorated with three sets of French doors, one opening onto the garden with the pool not far away. The stone tile floors were immaculate, the queen size bed had fresh sheets, plenty of pillows, and a mosquito net tasefully draped near the headboard and there was plenty of storage space for our clothes and personal belongings. A decent size flat screen TV with cable was provided, along with air conditioner and ceiling fans (2), a small refrigerator, sink, cups, plates, bowls, cutlery, and plenty of filtered water throughout our stay thanks to Raja, a friendly, attentive young Goan that works on the property. The bathroom large, it had all the necessities, including toilet paper (a rarity in Indian hotels), and plenty of hot water thanks to the solar panels on the roof. I have to say that although somewhat expensive by Indian standards, it was the nicest $64 room I have ever stayed in.

Breakfast is included and Sophia and her cook, Jessica, cheerfully greeted us each morning with a choice of yogurt (curd) with granola and fruit (bananas and pomegranite were in season while we were there), oatmeal (porridge to the Brits) with accompaniments, or eggs (any style – I liked the cheese and onion omelete with green chilies), along with fresh squeezed orange juice, coffee or tea, and toast with butter and jam (get some peanut butter for the Americans Hardip – Delphino’s has a nice locally made butter for 250 rupees per jar). Seriuosly, the breakfasts were marvelous, the food fresh and hot, and we never walked away hungry like some places we have stayed. 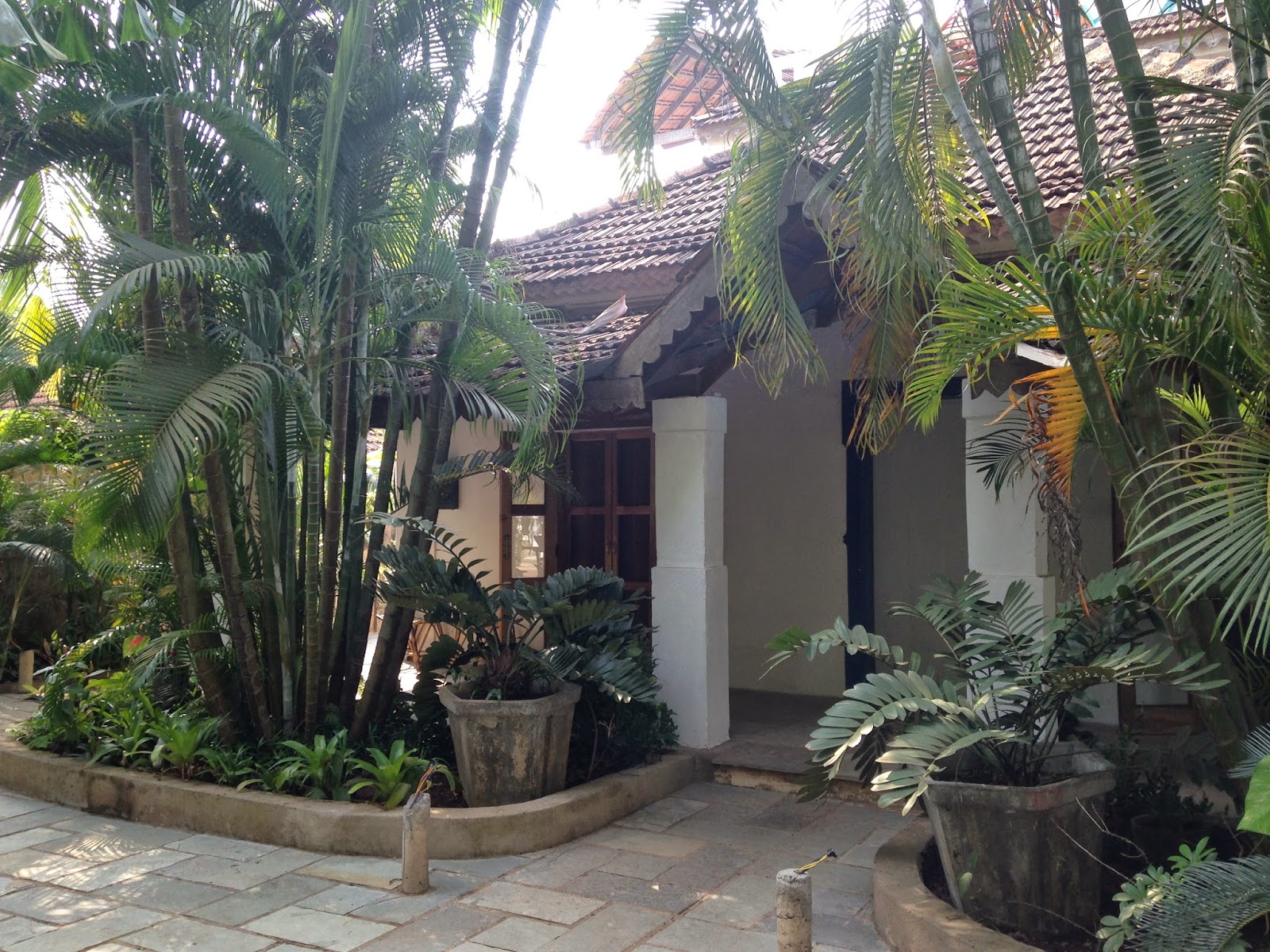 The property has four buildings, two large two-story structures with four guest rooms each, a small kitchen building, and the Hardip residence where Paul, Sophia, and their two beautiful (and very well behaved) children, along with Feni their sweet cat, live. The grounds are lush and well maintained with a medium size pool (relatively new), plenty of stone tile deck space, lounges, tables, umbrellas, and chairs and is surrounded by a six-foot concrete wall with locked gates for added privacy and security.

Casa Praia sits midway between Candolim Beach (250 meters) and the main beach road (150 meters) in Candolim (not sure if the road has another name), so you can exit one gate and walk to the beach for a day of sun, the Arabian sea and lounge chairs, umbrellas, drinks, and food at one of the countless beach “shacks” along the coast (the place we went to had a 400 rupee/$6.40 minimum, but all the comforts were included if you spent that much, a relative bargain) or through the other gate for a stroll into town. 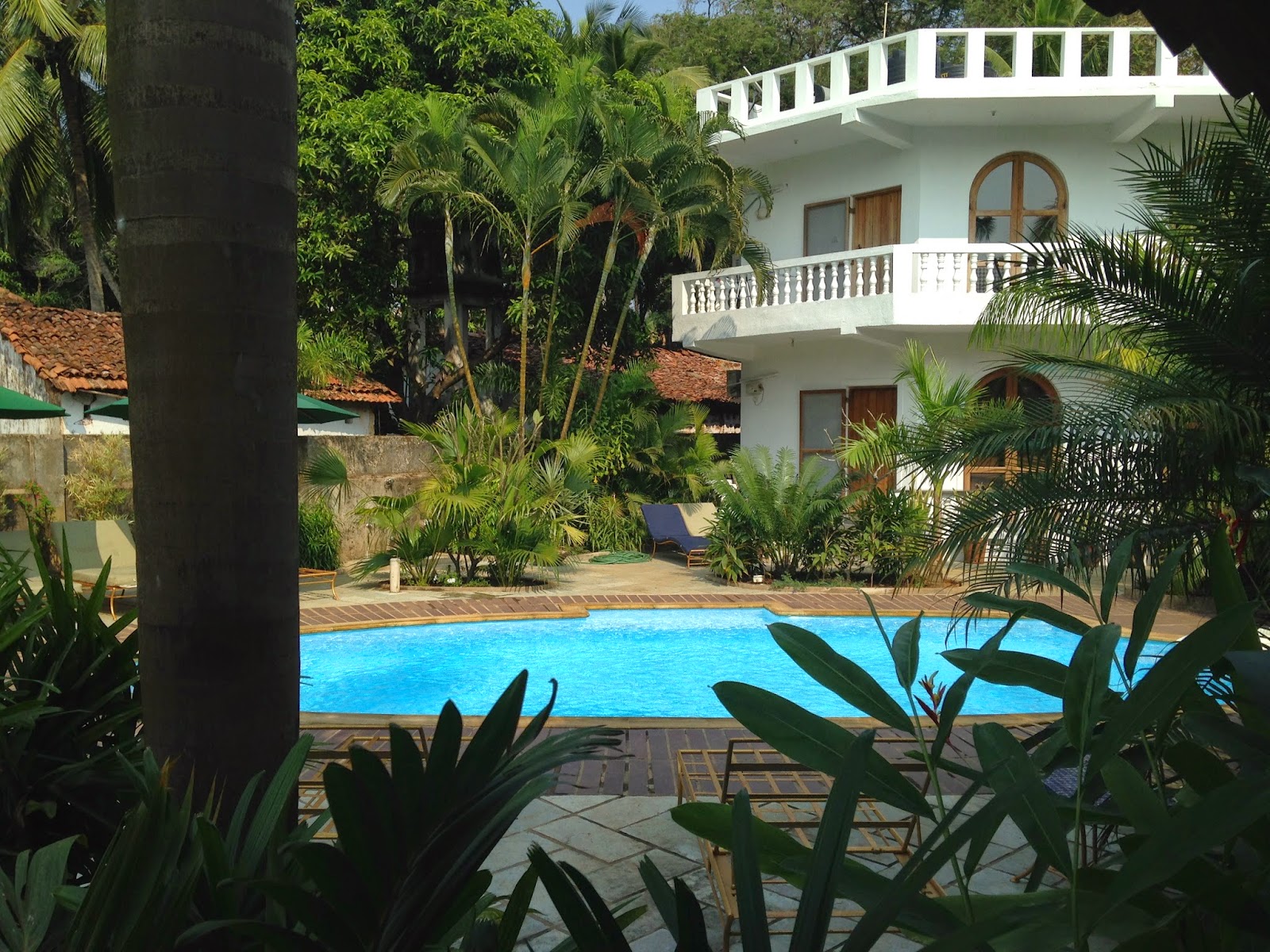 There are an overwhelming number of restaurants, bars, and shopping options within a stones throw of Casa Praia, so you do not have to venture far unless you are so inspired. We ate at Floyd’s our first day and were unimpressed, The Mango Grove our second and were equally unenthused, but on our third and fourth days we found The Bistro, which was a continental delight, and Tuscany Gardens, an Italian restaurant with nice, relatively authentic food. Please click on the links above to read my full reviews.

And if you staying over a Saturday night, you must go the the Saturday Market, a 20-minute ride (350 rupees for a Tuk-Tuk/500 rupees for a taxi) away where you will find an international food court with numerous options and a maze of countless stalls selling everything from Kashmiri scarves and hand painted boxes to local and name-label clothing, jewlery, and everything in between. 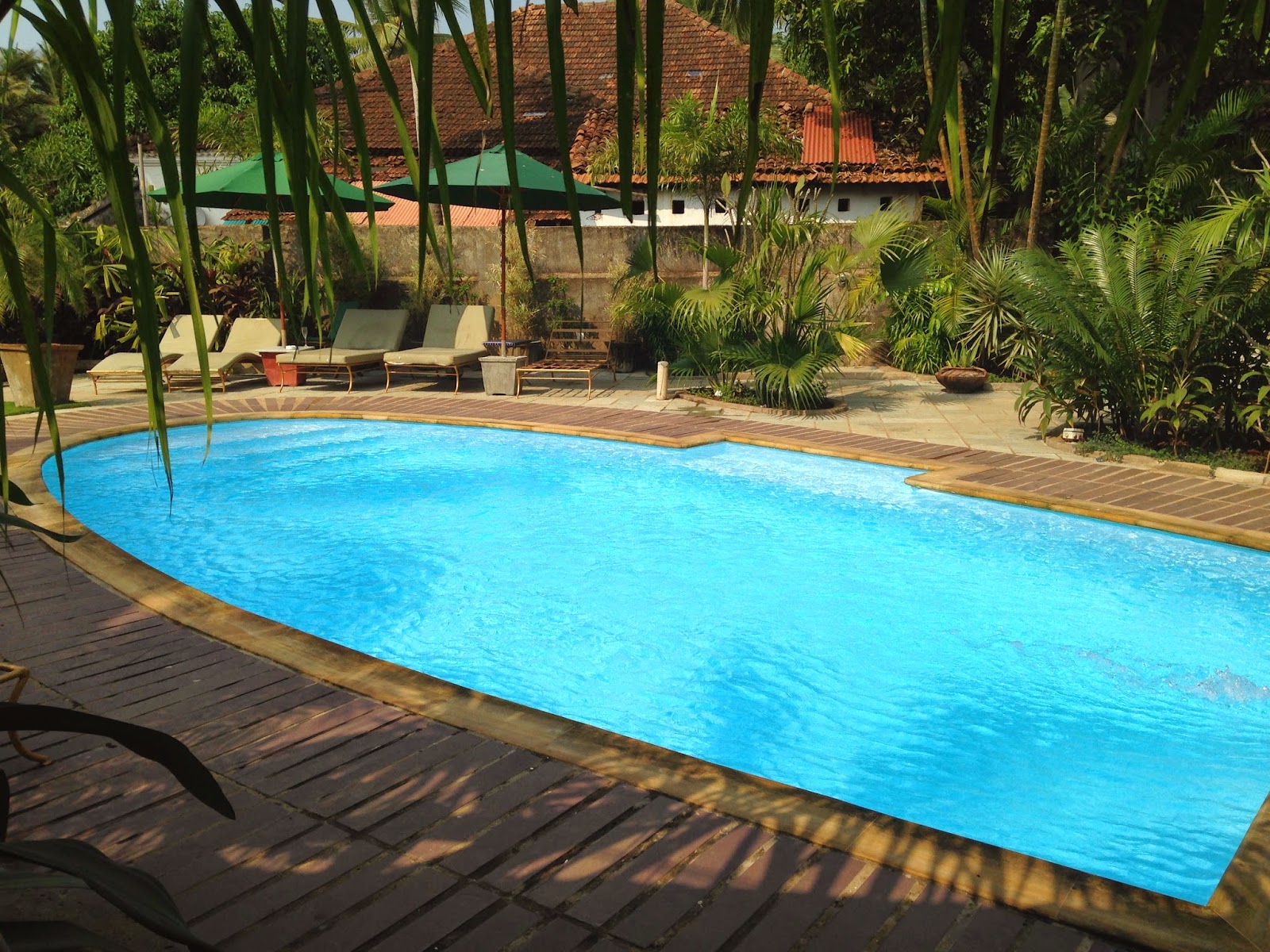 Old Goa is also worth a visit, so hire Garesh, one of the few “Goan” taxi drivers in town, and a very honest and warm person (his English is very good too, another rarity in India where one of the National languages is English BTW) to take you there with a stop by the two local forts on the way back. Old Goa has some nice, old Portuguese (Catholic) churches, one being the Basilica of Bom Jesus where Saint Francis di Xavier (their patron saint whom is encased in a glass casket and brought out for his festival which is only held every ten years – we were there during the festival, but opted not to atttend because of the reported massive crowds and traffic jams), Se’ Cathedral (a large, but unispiring church), Saint Augustine (a Portuguese Catholic church in ruins, but well worth a visit), and Saint Francis Church (adjacent to Se’ Cathedral, smaller, but much more ornate) which has an archeological museum attached (closed on Fridays, the day we were there of course).  Fort Aguada and its lighthouse are also worth a visit, but are not overly impressive, and Reis Magos Fort, a smaller, more attractive option (50 rupees entry, includes van ride to the top) with beautiful views of the river, the Arabian sea, and the cliffs below.  We paid 1,200 rupees/$19 for the six-hour tour (taxi), a bargain by Goa standards, so just ask Hardip to contact Garesh or contact him directly at +91-901-194-8499 if you need a lift anywhere.

On a final note, I was ill during our stay and realizing I had become dehydrated and needing medical attention, Sophia and Hardip jumped to attention and without hesitation rushed me to the local hospital, a large clinic with beds actually, where I was given IV fluids and kept overnight. Hardip returned later that night to drive to five pharmacies to find the potasium I needed (the hospital did not have any), and again the next morning (twice) to pick my wife and I up (she had spent the night in the bed next to me) and deliver us back to the hotel where I spent the next few days recovering. We also needed to extend our stay by three days, and good thing we did because of the unforeseen emergency, so Hardip shifted some bookings (we basically displaced Sophia’s older daughter, who was visiting from Scotland, we found out later … you’re a gem Sophia!) so we could remain the in the same room even though they were “fully booked”. All I can say to Paul and Sophia is “thank you for your unparalleled compassion, extreme kindness, and oustanding hospitality”.

Without a doubt, Casa Praia is “THE BOMB” and deserving of my highest rating, rarely bestowed on a hotel or restaurant …

CombatCritic Gives Casa Praia The Maximum … 10 Bombs Out Of 10 … More Bombs Are Better!

Title: You Will Not Find A Better Accommodation Value In Goa ... Casa Praia Is THE BOMB!

This post is good, whenever I just visit blogs I comes across some shitty articles written for search engines and irritate users but this information is quite good. It is simple, good and straightforward. Annapolis Airport Taxi