Washougal, WA: 2 Rivers Left Me In A Father's Day River Of Tears


I received an extremely odd "welcome", if you can call it that, as I walked through the doors for the first time, having delayed my initial visit after reading their many mediocre reviews and allowing them time to work all the bugs out. As I stood in front of the huge bar, the man serving drinks, whom I will assume was the owner, asked me, "can I help you?", to which I replied with some amazement, "Yes, I would like to sit down and eat some food, please". Why else would somebody walk into a restaurant if it was not to sit down and eat a meal? What do I look like, a bible salesman? What a stupid question. 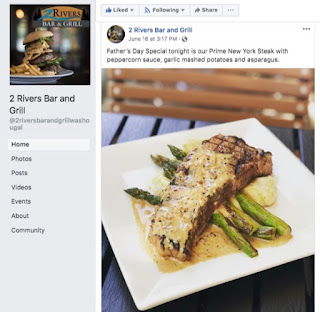 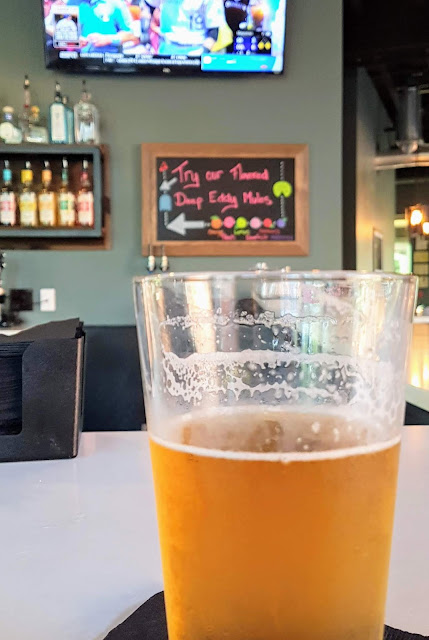 I ordered a pFriem IPA ($6), but was not asked if I wanted water, which I was desperate for after walking 18 holes of golf in the Father's Day sun. The IPA was decent, but $6 is a tad high if they hope to draw a crowd, especially early on a Sunday evening when they had just a smattering of customers. You can get similar IPAs around town for $4 to $5, so why should I spend an extra buck to come here? 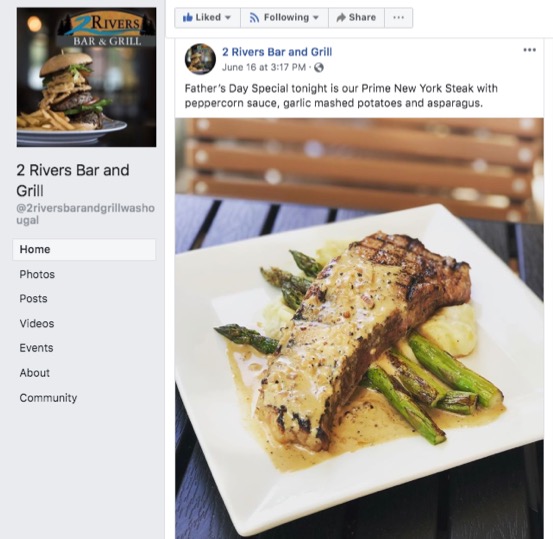 I learned a couple days after my visit that the Father's Day Special was a "Prime New York Steak with peppercorn sauce, garlic mashed potatoes and asparagus", YUM!, but I did not see it advertised anywhere and they did not communicate the special to me, so I ordered a 1/2 pound Cheeseburger ($15) with bacon, grilled onions, and garlic aioli, also coming with a side of french fries. The burger was obviously not handmade in house, probably frozen, and the grilled onions and garlic aioli, if there were any at all, must have been wrapped up in the overly crispy folded-up clump of bacon they stuck on top of the burger (see photo). The "cheddar cheese" was apparently of the processed variety, white, very thin, and perfectly square and the burger was dry, even after putting some mayo on the bun. It was not very flavorful. With nary a garnish on the big white plate, the burger looked more like a slider (see photos) than a 1/2 pound burger. 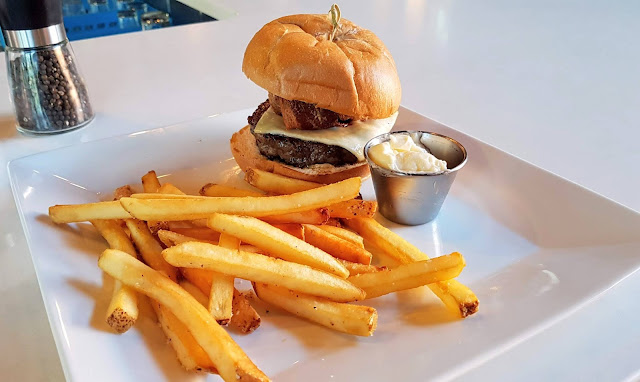 BTW, I was repositioning the plate to take photos for my review when the owner blurted out across the room: "Do you want me to take it outside so you can get a better picture?". The other people at the bar laughed at me, as if it were funny, but I found the comment extremely rude, completely uncalled for, and very unprofessional.

The space is nice, although sparsely decorated, but they should have kept the massive wood-fired pizza oven left by the previous occupants instead of replacing it with an overly large bar which dominates the large room. We needed a good mom and pop Italian restaurant with red and white checkered table clothes and chianti bottles with wax from recently departed candles dripping down the sides, not another modern, gastro/brew pub of which there are far too many in our area. 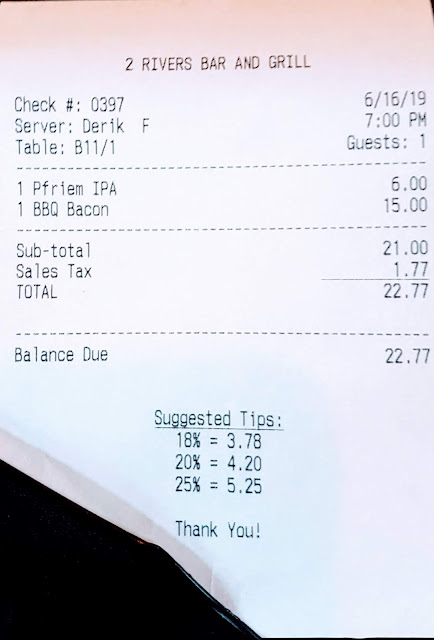 Based on the many other less than stellar reviews posted recently and my questionable Father's Day experience, it seems as though the owners have already given up. How can you expect a new business to thrive if you do not even bother to publish a website for months after opening and serve customers frozen burgers and fries, charging $15 for an inferior burger to the one I can get at the bar across the street for under $10. Here it is eight months after opening and they have still not even bothered to list a website on their Yelp page ... MEH!

I received a very negative and slanderous reply (as well as a similar DM) from "Derik", the alleged owner of 2 Rivers, after writing this review, so I thought it appropriate to update my review and downgrade my rating, which I have done. Derik called me a "vagrant" and "creepy", resorting to making up a story about me rather than take responsibility for their horrible customer service and rude behavior. He is a liar. Here is his public reply to my review:

Comment from Derik F. of 2 Rivers Bar and Grill
Business Owner
6/23/2019  So this review made us finally get on Yelp on respond to people even though we know most people get on Yelp to complain or try to get something for free.

This guy walked in and we thought from his appearance he was  a transient we had to ask to leave weeks before.  He walked in started walking arond and looking very strange. It made many other customers uncomfortable. I asked how can I help you, and he blurted out I want to eat. He was advised he could take a seat anywhere he liked.  He sat at the bar and immediately people seated close by started to shuffle down. I asked if I could stay let him with anything to drink. He asked a couple questions about beer and decided on one.  He was given a menu and he looked it over and started doing weird things under the counter. Another customer pulled me aside and said he thought he was trying to take pictures of the female servers.  I immediately went back over to the bar and he put his phone away. I asked if he needed anything and he had a few questions and decided upon a burger.  He was checked on many times and continued to act strange. My goal at that point was to get him served and out of the location so he didn't continue to make my staff or customers feel uncomfortable.  His food came out and he pulled out his phone under the counter again.  I wanted to make sure he was aware we knew what he was doing, so I stated " we can take the food outside if you want better pics". He quickly put his phone away at that point and are his burger quickly.

When he was done I removed his plate and gave him his check.
He never made any attempt to clarify what he was taking pictures of and why he wanted pictures of the food or servers.

He paid his check and left some business card about being the "Combat Critic".  I remitting guy from stalking our Facebook page and being rude before we even opened.

Anyway, it gave a lot of people at the restaurant a good laugh when I shared that he thought he was some sort of world wide food critic/chef/ consumer crusader.

He is very awkward and not allowed in our location.

As far as food, he's trying to give a bad review because he was caught being a creeper taking pictures.   Be aware of this one.

I am a highly decorated retired Air Force lieutenant colonel and combat disabled veteran. I was wearing golf attire that day, golf shorts, a new, collared Under Armor shirt, and a pair of white Nike Air sneakers. If I looked like a vagrant, Derik must be used to Beverly Hill's vagrants. I take great pride in my military service as I do my integrity and honor. I resent being called a vagrant and have my character defamed by a whining business owner who cannot accept the truth ... 2 Rivers Bar and Grill's management is out of control and guilty of defamation of character. 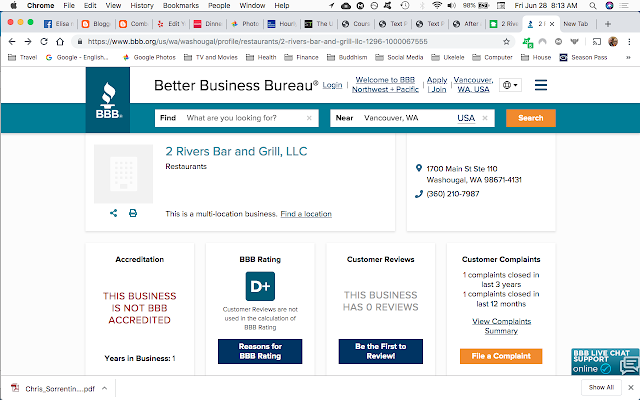 They currently have a D+ Rating by the Better Business Bureau (BBB), which will like drop further after the BBB complaint I recently filed, and will soon have a civil lawsuit on their hands for publicly defaming my character, simply to make excuses for their terrible food and disgusting behavior.

CombatCritic Now Gives 2 Rivers Bar and Grill 1 Bomb Out Of 10 And A Spot On My "WALL OF SHAME" ... Go There, While You Still Can, And Be Insulted By The Owners ... More Bombs Are Better!

Title: Washougal, WA: 2 Rivers Left Me In A Father's Day River Of Tears