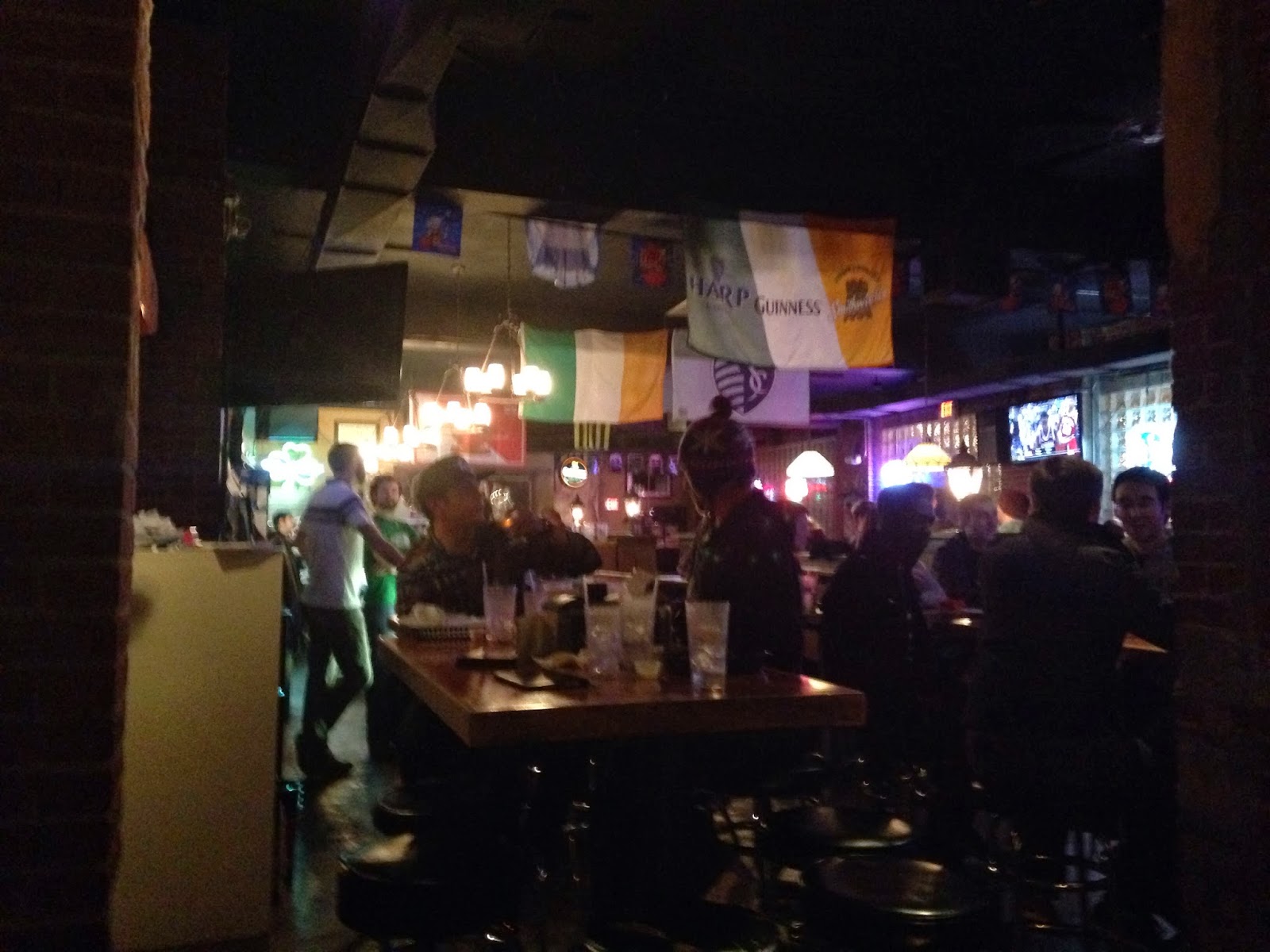 I was a bit reluctant to try Dempsey's after reading recent reviews by my Elite '14 brothers and sisters in Lawrence, Kansas saying that "things have gone downhill" and that the burgers are "greasy", but heck ... don't burgers and grease go hand-in-hand? I am sure glad we gave 'em a shot!


Don't want to gross you out, but in preparation for two scopes being inserted into my body, one in each end so to speak, two days later and the inevitable PREPeration (H), I knew I would not have a decent meal for at least 36 hours, so a big greasy burger and basket of truffle fries sounded pretty darn good!

The place is a local haunt for KU (college basketball powerhouse University of Kansas) students and this particular Tuesday night in Lawrence was no exception. With about half of their burgers being offered at half-price ($4-$5 a pop) to students, I know why they were busy. But a pub with just 5 or 6 draughts available on-tap was a bit unusual.  I ordered an O'Dell (not O'Doules) IPA and at $4.50 for a British-size pint it was a good value with a strong, rich, hoppy flavor as all good IPAs do.

The fries were plentiful and awesome! Lightly salted, the hand cut fries were sprinkled with Parmesan (parmigiana in the old country) cheese, parsley, and accompanied by no less than 6 different sauces (catsup, spicy mustard, old bay and tomato coulis aioli, sweet chili aioli, truffle cream, and roasted garlic aioli ... all made from scratch). We barely made a notch in the basket, taking half home for my wife to eat the next night while I fasted in prep for the next morning's procedure under the influence of "Milk of Amnesia".

As usual, on my first visit to this and many other restaurants, I ordered the simplest burger on the menu, the "House" cheeseburger ($7.50) medium-well with cheddar cheese, a big piece of butter lettuce, two thick slices of tomato, homemade dill pickle, and both grilled white (as I had asked) and raw red onion. I added bacon for an extra buck, well cooked but not too crispy. The bun was nicely toasted, looking like a "pretzel" bun even though that was not the way it was described on the menu. The burger was in-fact greasy, but perfectly so, thick, and cooked just as I had ordered it. The bun was in a bit of disarray by the time I finished, but held together until the last bite, keeping my hands relatively clean although I did go through about 20 of the rather thin napkins supplied on the table.

The Bacon Mushroom Swiss Burger ($9) comes with sauteed shitake and portabello mushrooms, Gruyere and Swiss cheeses, and Applewood bacon on a toasted pretzel bun. Unfortunately, on this particular night at least, the bun was not toasted and, in-fact, was slightly cold to the touch. The burger was delicious nonetheless, an 8 ounce patty cooked to perfection with melted cheese oozing out of the side of the bun.

The service was very good, especially considering the large, energetic crown consuming burgers along with mass quantities of beer. The place is a bit of a dive, plain with lots of rough wood and glass, making the room rather chilly, particularly next to the window on a cold winter night where we needed to keep our coats on during our meal. Who knows, maybe KU research indicates that beer consumption is inversely proportionate to the temperature of the room?

CombatCritic Gives Dempsey's Burger Pub A Solid 7 Bombs Out of 10 ... BOMBS ARE GOOD!