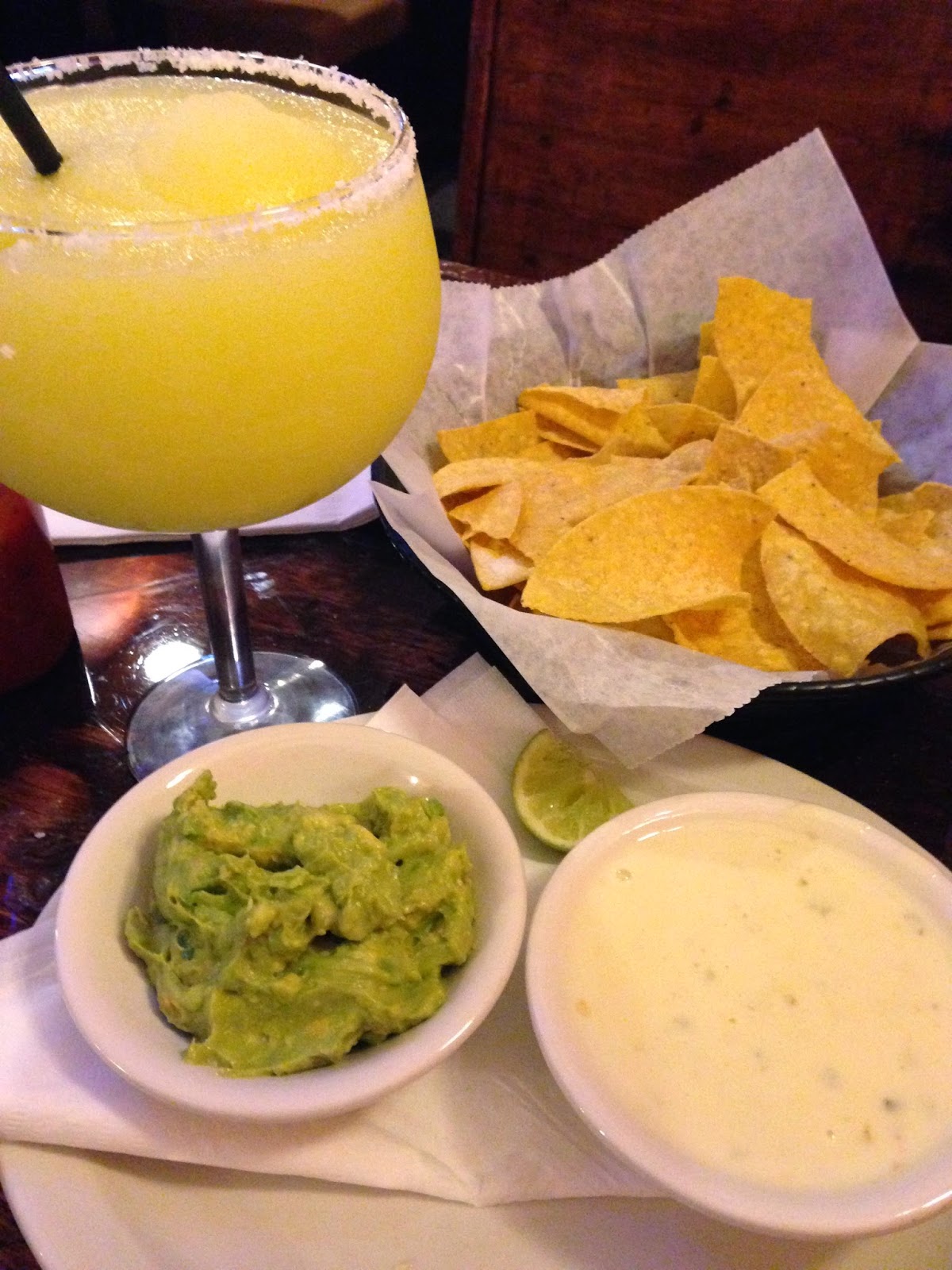 Another closed El Mezcal location in a shopping center on the corner of Wakarusa and Bob Billings Parkway (now called "El Sol"), I had read in El Sol's inaugural review that they were a "Tex-Mex" restaurant. My fellow Elite '14 member had high praise for their food, service, and ambience, so we had to give them a try. Our experience was once again very average in a town not well town for outstanding cuisine and I found not a single Tex-Mex item on the menu. In fact, when I asked the waiter if they were a Tex-Mex restaurant, he stated "definitely not".
As mentioned in recent reviews, I am a Mexican food snob, having grown up in LA where Mexican restaurants outnumber Bentleys and spending three years in San Antonio, Texas during my first Air Force assignment. Not changing my modus operandi,  I stuck with the basics, tacos and enchiladas, during my first visit to see if they can get them right before moving on to more complex dishes.
The restaurant's decor is very colorful with natural wood tables, bright tones, and reminiscent of  a traditional Mexican cantina. The service was very attentive, friendly, and fast. Our server, Rafael, was extremely polite and amenable to answering my many questions. We ordered the guacamole ($3.99) and the white cheese dip (queso blanco - medium - $2.99). The guacamole was small, made with avocado and SMALL PIECES OF TOMATO, but tasty. The queso blanco was warm and well seasoned, adhering to the pre-fab chips, another disappointment and a dead giveaway of a sub-par restaurant in my experience. I had the 27 ounce margarita (on the rocks - $6.99) which was decent, not very strong, and priced $2 more than El Mezcal. My wife had the horchata, a Mexican rice-based drink which was better than El Mezcal's various versions.
My wife ordered the cheese quesadilla, coming with a small dab of guacamole and pico di gallo ($4.99) and a cheese and onion enchilada with queso blanco instead of red sauce (ala carte - $1.99), coming with refried beans. It is difficult to mess-up a quesadilla and El Sol was again no exception. She liked the enchilada, but queso blanco was a bit too spicy for her Itialan tastebuds (the spiciest dish in Italy is penne arribiatta).
I decided to forego the rice and get down to brass tacks, ordering two shredded beef tacos and a cheese and onion enchilada ($8.49) combo plate (all beans). The tacos came in pre-fab corn tortillas and the beef, although skimpy, was well seasoned and topped with a little lettuce, white cheese, and chopped tomato. I saved some of the guacamole for my tacos, borrowed my wife's pico de gallo, and added their salsa, which was not bad. The tacos were not great. The enchilada sauce was a bit too watery and lacked taste, the enchilada cool, not even lukewarm, another disappointment. True Tex-Mex enchiladas are smothered in chili con carne and topped with cheese, but this bore no resemblance to any Tex-Mex I have eaten and was one of the worst enchiladas I have had.
Again, not my favorite Mexican restaurant in Lawrence by any stretch and we will likely not return given the distance from our home and the fact that there are at least four better Mexican eateries in closer proximity.

CombatCritic Gives El Sol 5 Out of 10 Bombs ... BOMBAS ARE BUENAS! 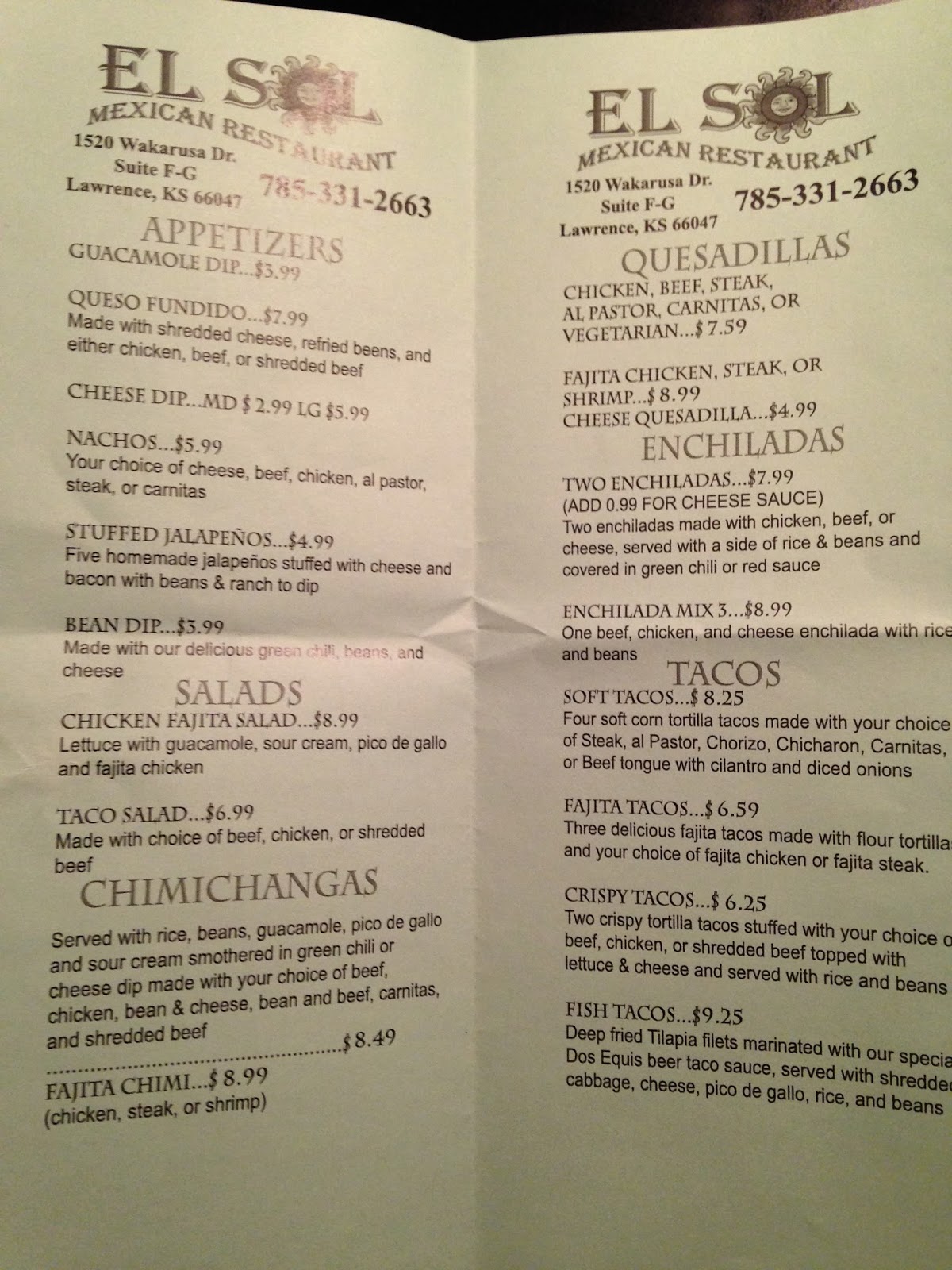 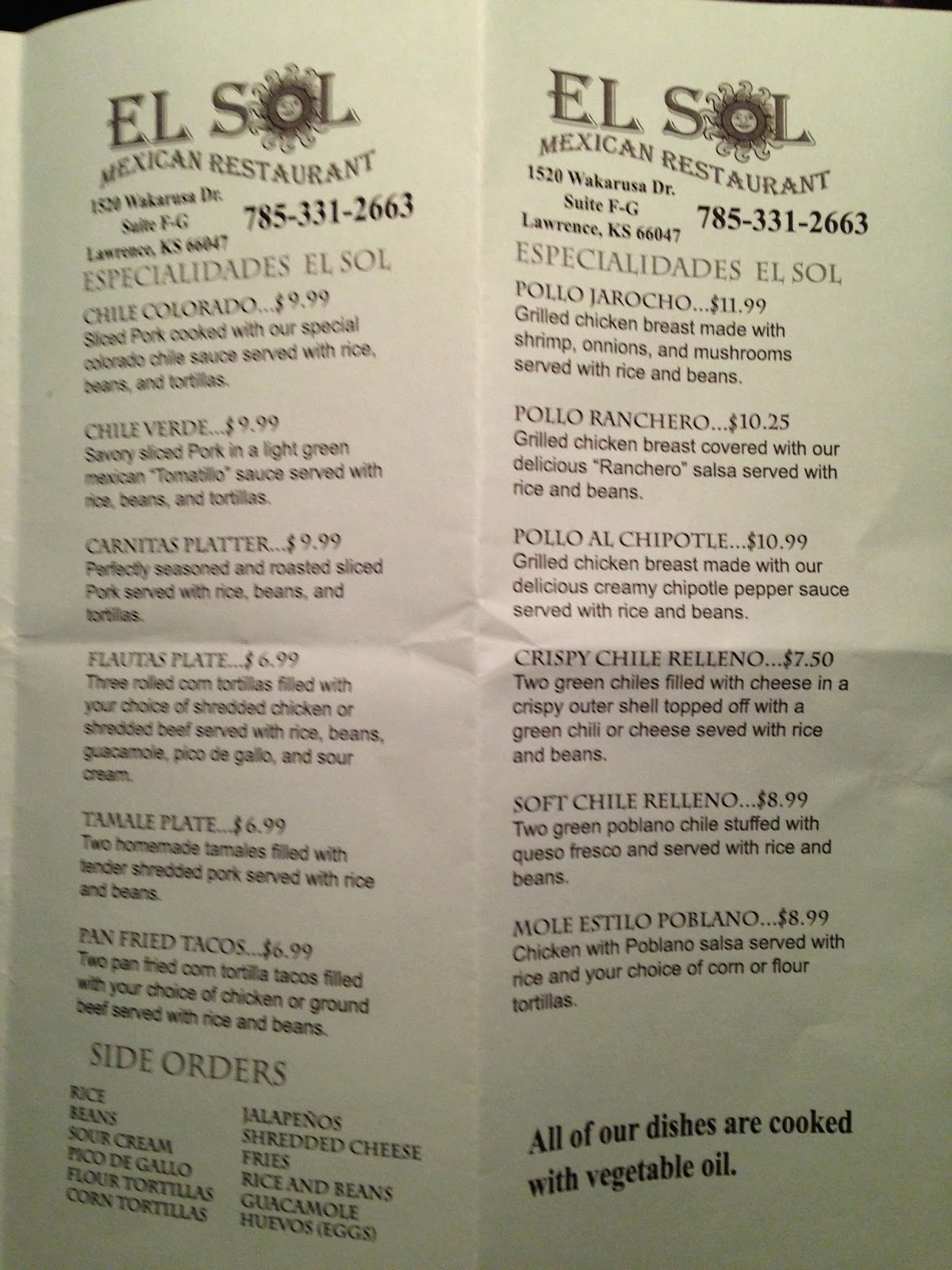 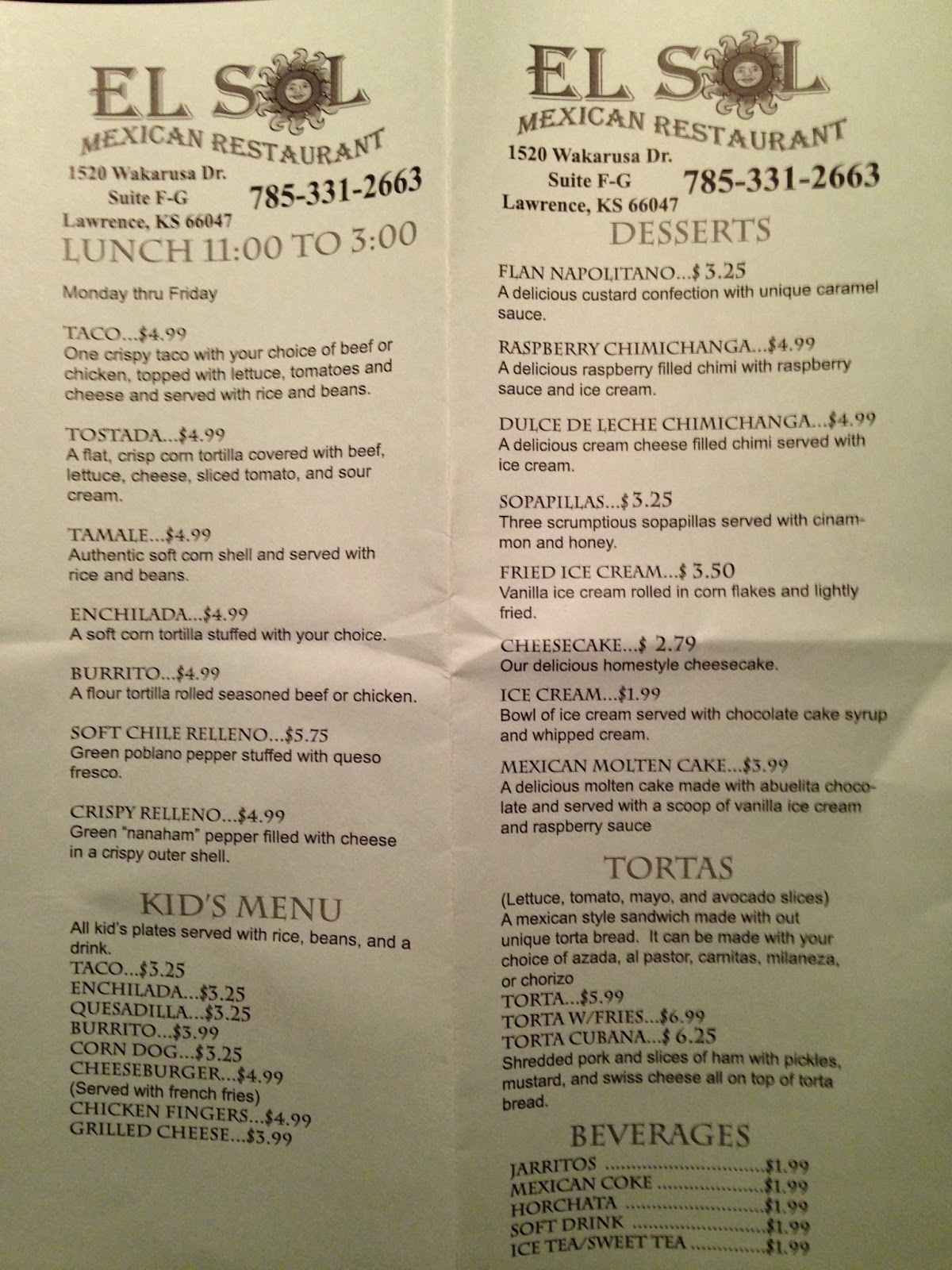 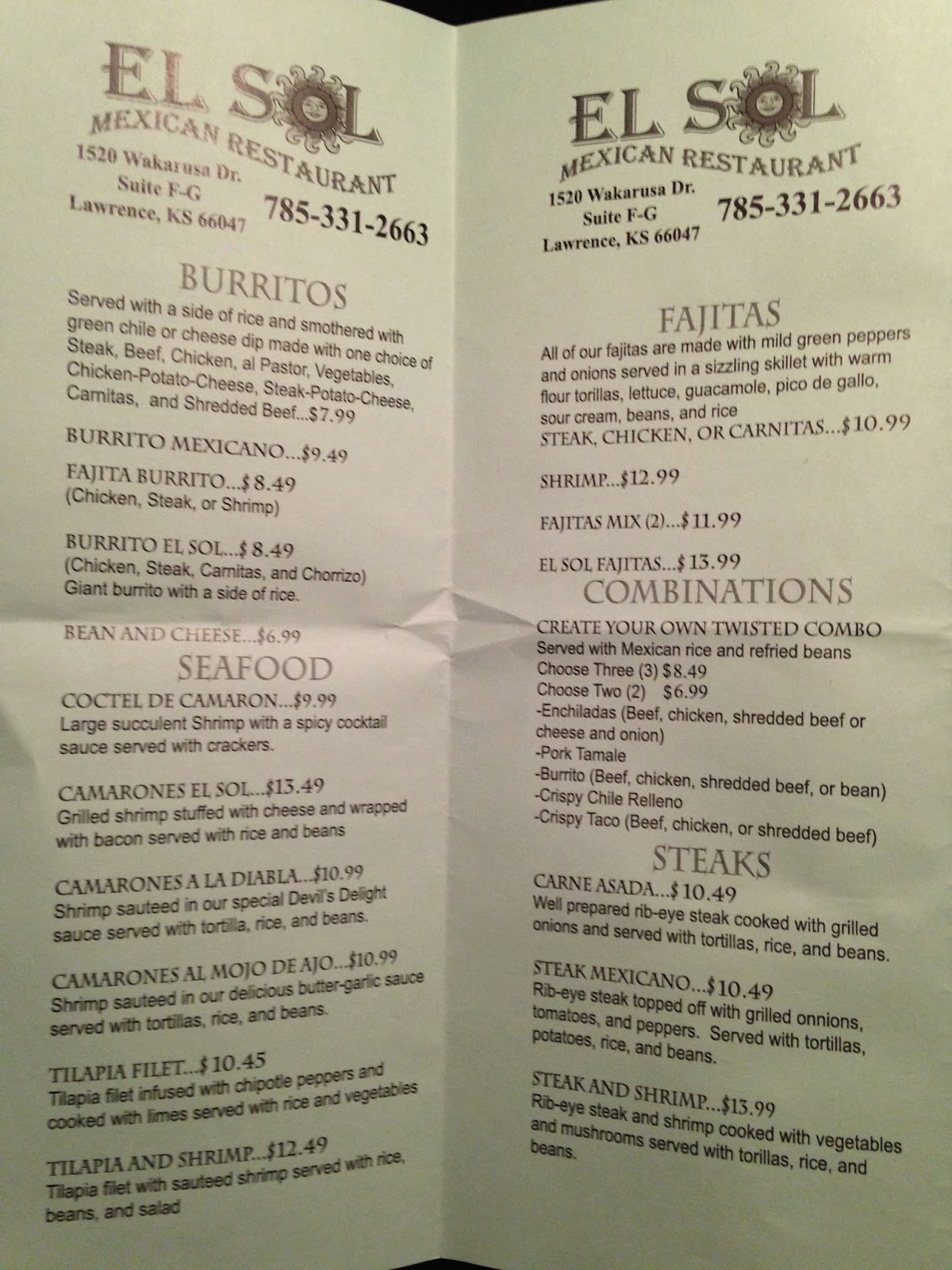