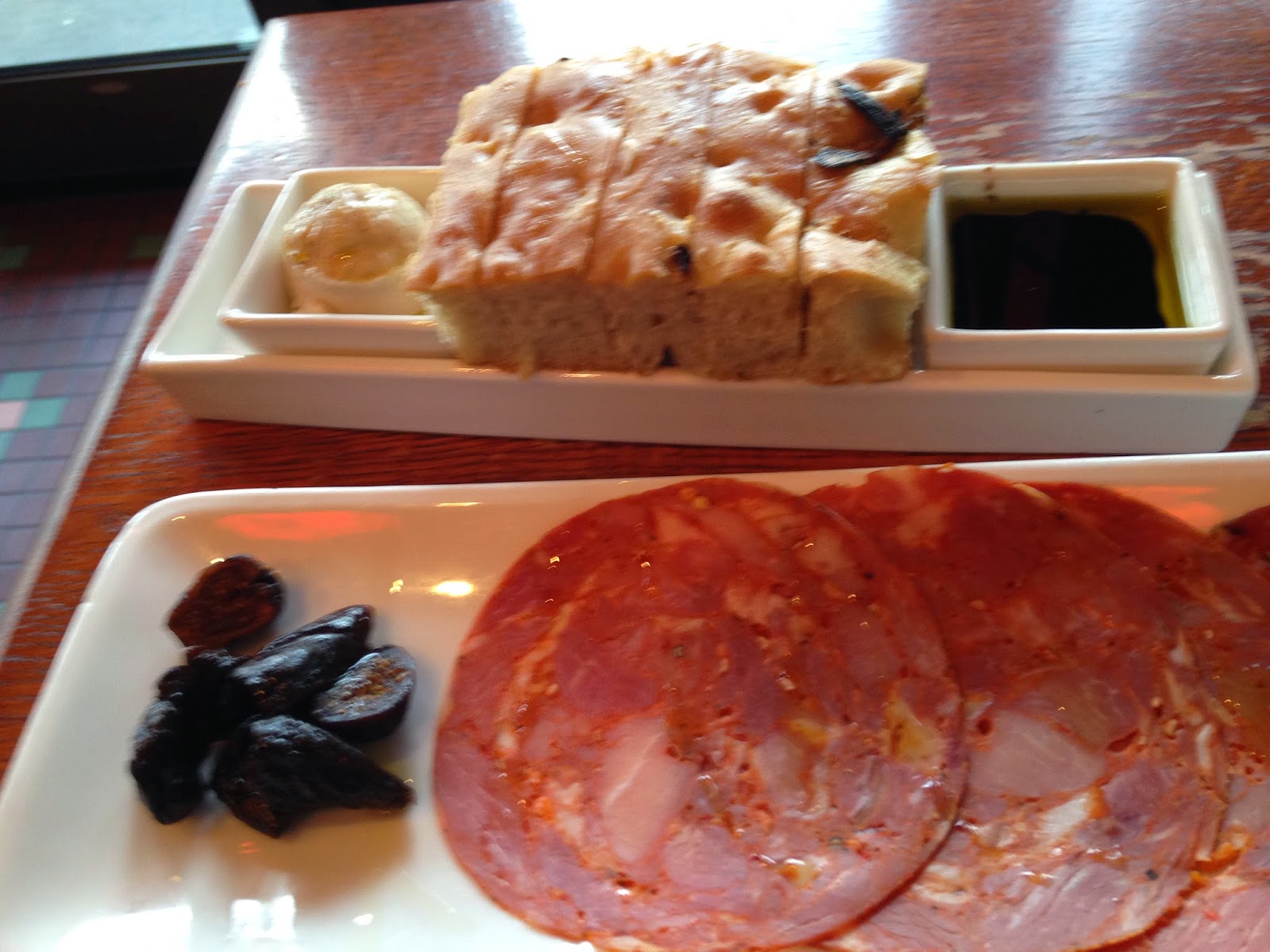 Being of Italian descent with a grandmother from the homeland who was an excellent cook, having lived in Italy for three years and visiting frequently, and married to a Sicilian, let's just say that I know good Italian food when I eat it. I found Genovese to be a fair Americanized reproduction with limited options.

With just "3 1/2 Stars" on Yelp and what I had heard about Genovese around town, we were not in a hurry to give them a try. There has been a long standing Groupon available for Genovese offering one appetizer ($6.50 - $9) and two entrees ($8.50 - $19) for $30 (notice that if you buy the least expensive offerings, you actually lose $6.50 on the deal), so we decided to have Easter dinner there. 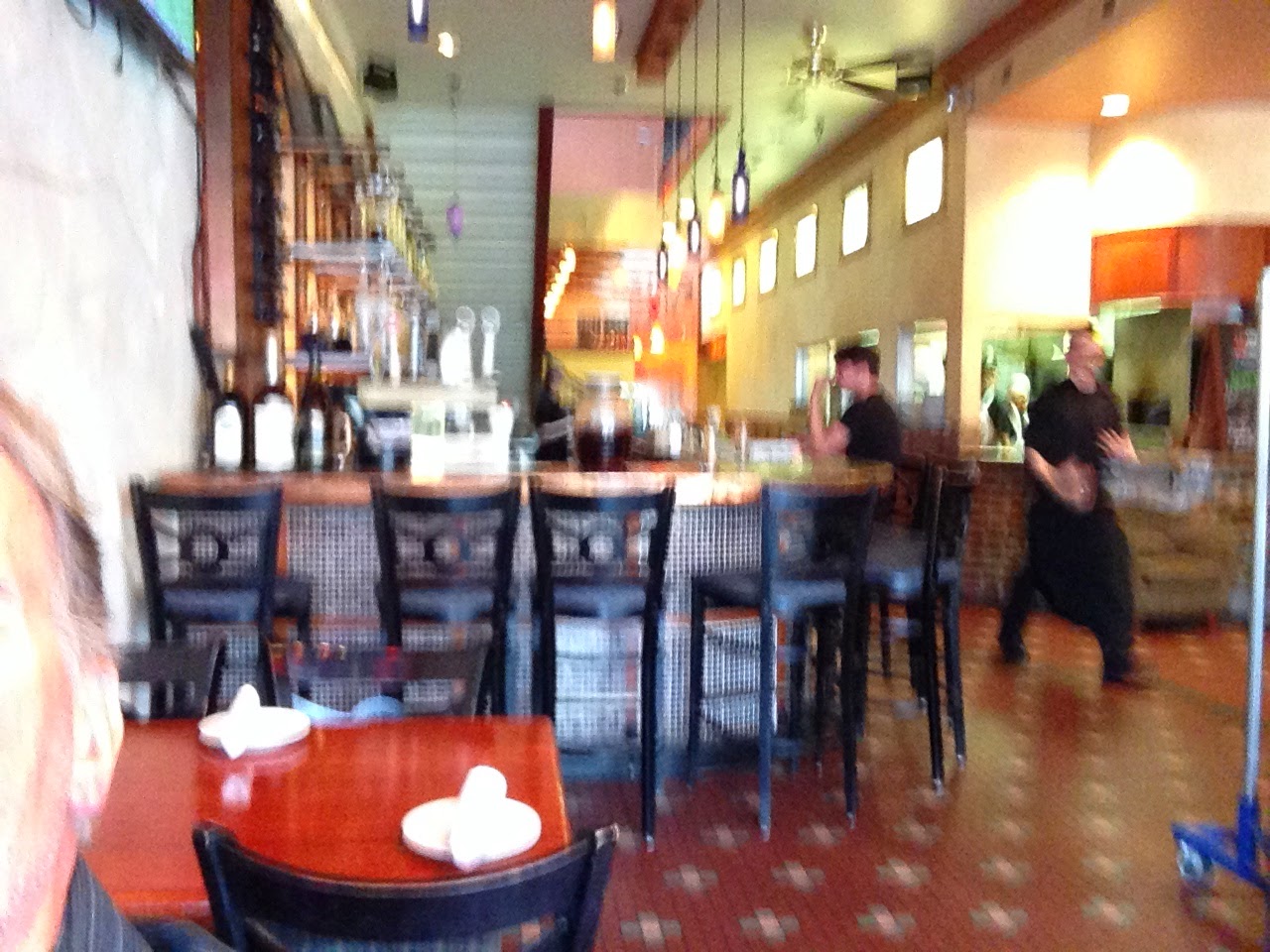 It is not well advertised on Groupon, but the entrees are strictly from the pasta and pizza categories and the extra meat add-on for the pasta (chicken or sausage - $3, salmon or shrimp - $4) is included in the Groupon. If you do not order the most expensive options and the meat add-on, this Groupon is not a great value.

Genovese has a $20 wine list which is a nice option for those on a budget with one bottle from each of the most popular grape varieties, including a Jacob's Creek (Australia) Shiraz (Syrah) which I have had before that was quite nice and a very good value. There is a Merlot, Cabernet Sauvignon, and a Cabernet/Sangiovese blend from Italy among others in the "red" category and an equal number of white options which I did not even peruse.

For our appetizers (antipasti), we decided on the "spinach risotto fritters stuffed with fresh mozzarella cheese topped with fonduta sauce" ($6.50) and an appetizer of the day, a selection of salumi, including capicollo, soppressata, and a cured duck accompanied by dried figs. We had to ask our server to bring bread because our antipasti had arrived and there was no indication that the bread would be forthcoming. 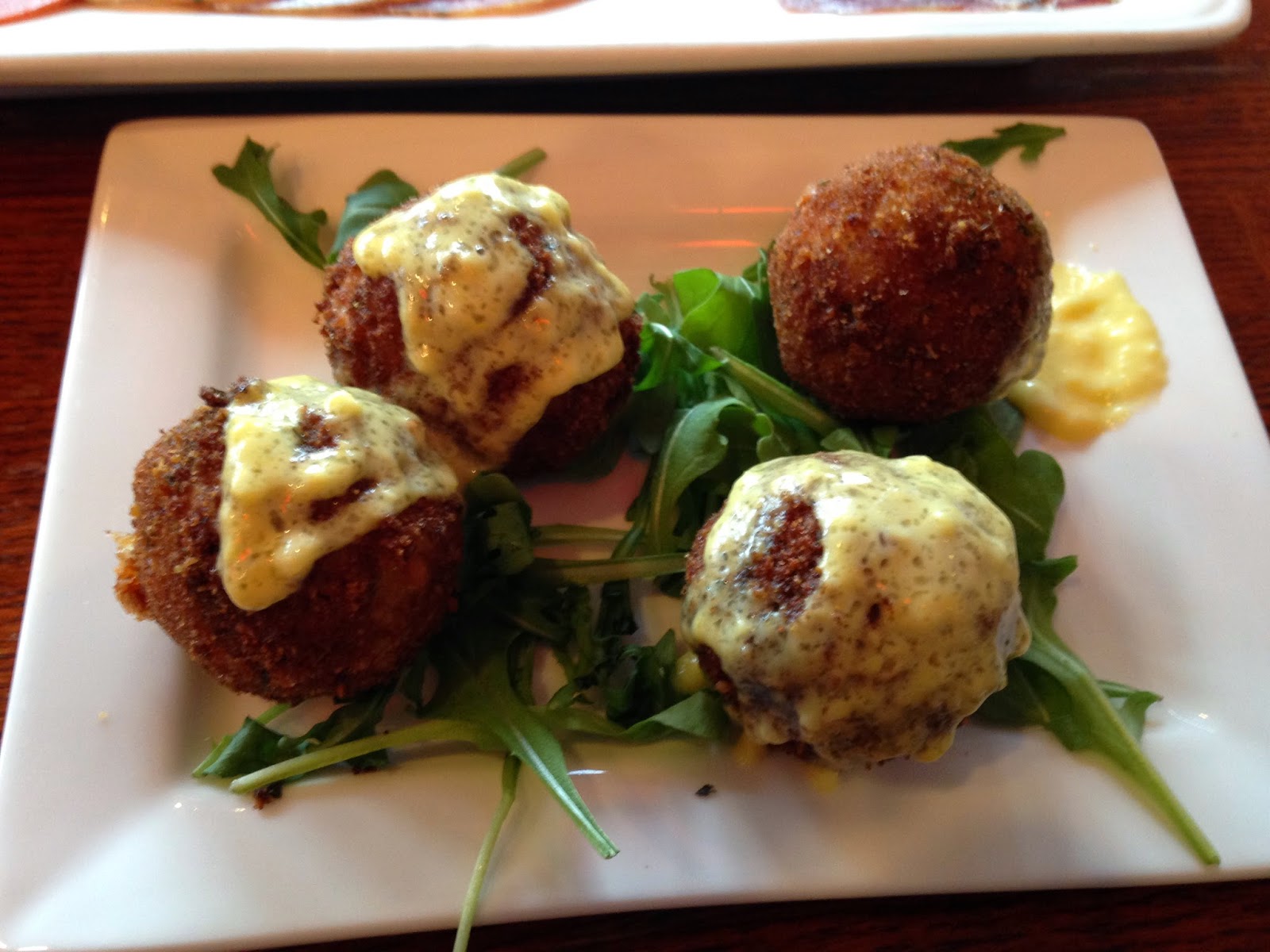 The bread was sliced into six small pieces, resembling a thick, fluffy focaccia and was accompanied by a lava bean puree and olive oil/Balsamic vinegar blend both in small cups. The "risotto fritters" are actually called "arancini de riso" and a specialty of Southern Italy (from Rome to Sicily). A small ball of rice and herbs with a piece of cheese in the center formed into a ball is then coated with flour, dipped in egg and bread crumbs, then deep fried. The cured meats (salumi) were sparse, with just three extremely thin pieces each of the capicollo, soppressata, and duck for two people, and the soppressata still had the exterior casing attached which I only realized after finding it lingering in my mouth. The meats were tasty and of good quality, but at $1 for each slice, neither very filling nor a great value. 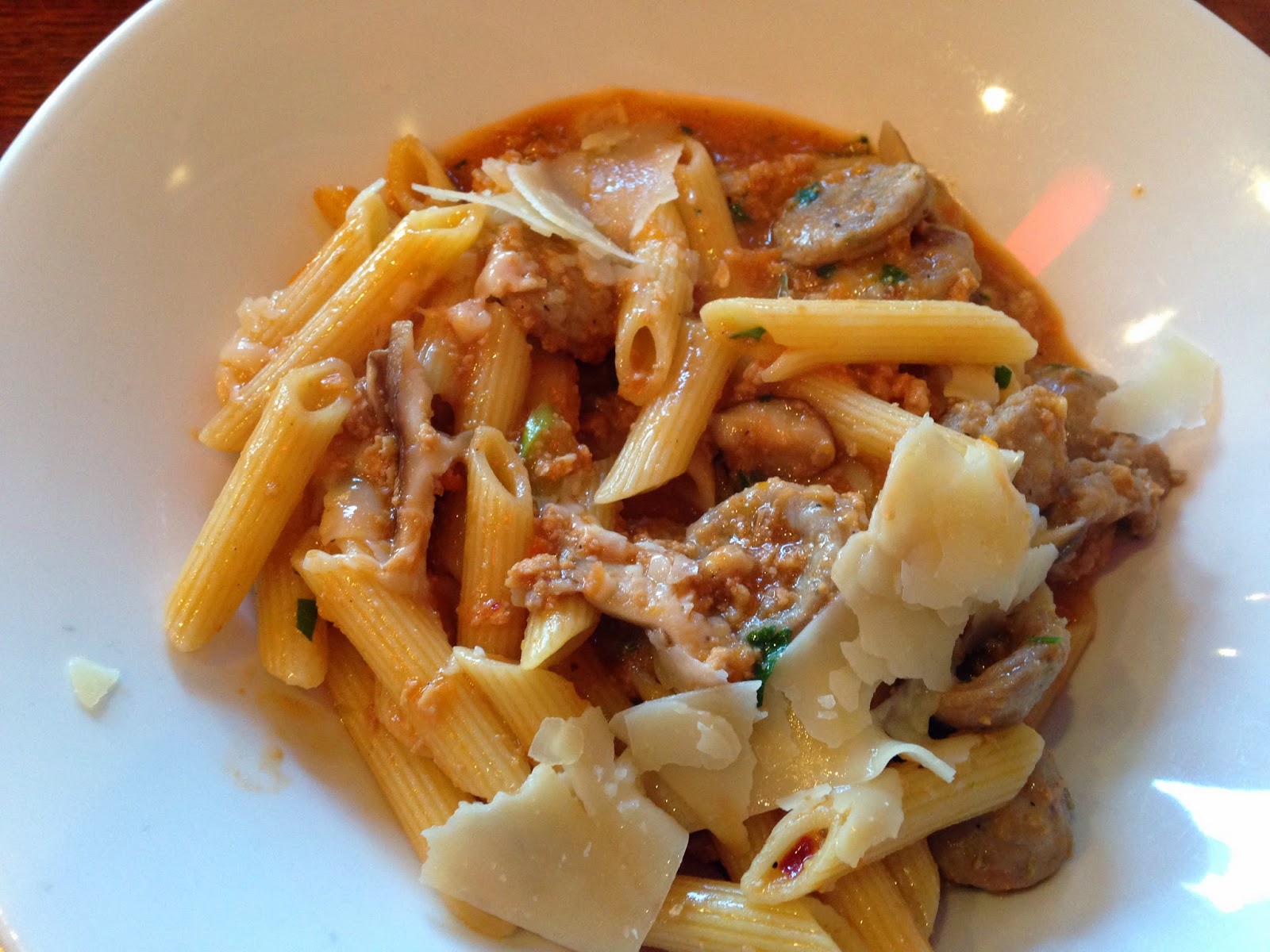 For my entree, I decided on the penne with veal Bolognese, Wakarusa Valley wild mushrooms, and shaved Parmesan with a side of sausage ($16.50 + $3 = $19.50). The penne were store bought, as advertised, cooked "al dente" as they should be, coming in a light ground veal sauce which was a little too soupy. The "shaved Parmesan" tasted like no parmesan (or Parmigiano) I have ever had and was more similar to an Asiago from Sam's Club than the aged cheese I love more than life itself. Unfortunately, the side of sausage was cut into pieces and added to the pasta instead of coming on a separate plate, which I had expected. The pasta was "OK", not overly abundant, and certainly no better than anything I have had at Olive Garden (the few times I was forced to eat there). At $16.50, the dish was at least $3 to $4 more than it should be, but that is to be expected at the high rent establishments on Massachusetts Street in Downtown Lawrence. 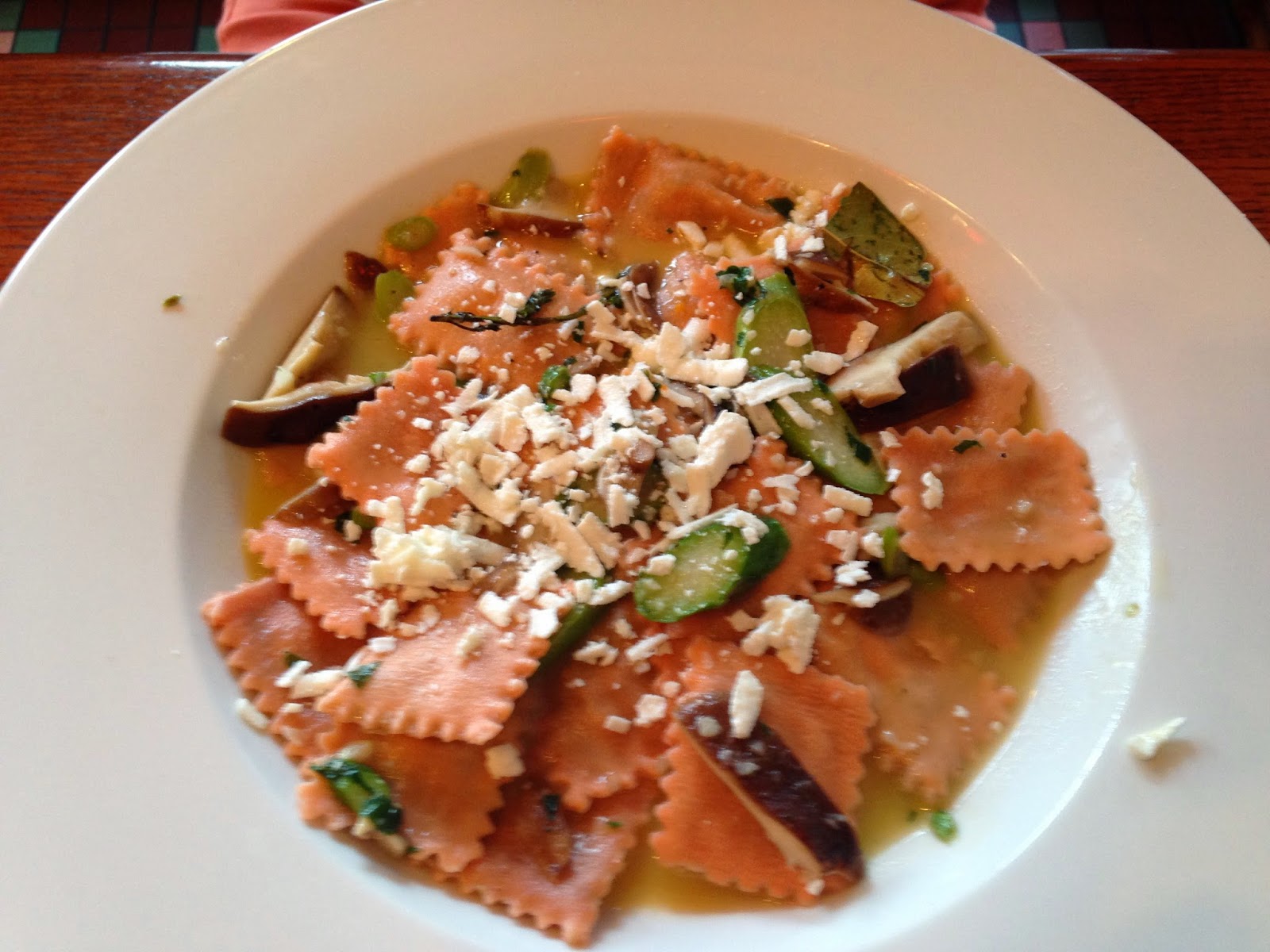 At $16, my wife had the "wild mushroom and asparagus ravioli with Shiitake mushrooms, vegetable brodo (broth), and Ricotta salata" (salted ricotta cheese) along with a side of sausage ($3). She asked for the sausage on the side, but when the pasta arrived, the sausage were already added to the ravioli for some reason, so we had to send it back. Again, not abundant in size, the ravioli were colorful, but bland and a little too dry until doused with some broth.

The decor is odd for an Italian restaurant, more appropriate for a hamburger joint than a ristorante, but comfortable with a small outdoor patio on the sidewalk with just four tables for those who enjoy people watching, noise, and exhaust fumes. The service was attentive, friendly, and professional, the highlight of our meal.

The bill came to close to $80, so by the time tip was added we were looking at a "C-note" for dinner, not an inexpensive venture by any stretch. Thanks to the Groupon, our portion came to nearly $45 (plus the $30 we paid for the Groupon - a grand total of $75), a much more tolerable total but still quite a bit higher than it was worth. For comparison, a similar dinner at Lidia's, one of the best Italian restaurants in Kansas City, with two appetizers, two entrees (meat dishes, not pizza/pasta), a bottle of wine and dessert usually comes to a little over $100 including tip. So without the Groupon, Genovese does not even come close to a meal at Lidia's and is a poor value in my eyes ...

CombatCritic Gives Genovese 5 Bombs Out of 10 ... MORE BOMBS ARE GOOD!