Stairway To Heaven ... NOT!

Javid, the owner of Pink House, was very helpful and friendly, answering questions about my reservation and upcoming visit to Dharamsala. He arranged for a ride from the airport in Gogol for 700 rupees ($11.35) upon arrival, which I thought was a decent price by US standards for a 10-mile taxi ride. Considering that the taxi from my hotel in Delhi (where everything is more expensive than in Dharamsala) to the airport was just 400 rupees ($6.50 for a 13-mile journey), it turned out not to be such a great deal after all. The driver dropped me on the street and pointed to some extremely long, very steep, dangerous looking stairs in varying degrees of disrepair (note to self #1 … is this the only access point?”) and said “look for the sign”.

The hotel is nice enough, not swank and not a dive, with many rooms having balconies and views of the foothills and Himalayas. Javid was updating many of the rooms during my stay, making them more comfortable, but also causing noise problems and clutter while the repairs were being made. The rooms have differing views depending on which direction you are facing and which floor you are on (1st floor rooms have poor views), but all have cable TVs (old CRTs), balconies, large beds, cabinet (no closet or wardrobe), bath with western-style toilet, sink, and a shower with no enclosure (your bathroom is your shower in India), but no heating system in sight (note to self #2 … “it seems awful chilly in here”). There is also Wi-Fi throughout the hotel (note to self #3 … “I hope the Wi-Fi isn’t as slow as it was in Delhi!”), with a router on each floor, so the signal is strong everywhere … WOO-HOO!

The first few days I had breakfast at the “rooftop café”, which is just barely that, a roof with a couple plastic tables and chairs, no roof, no cover, and no heat on cold November mornings. Still recovering from jet lag, I was up early each morning watching the gorgeous sunrises and noticed that the servers first arrived to take orders at varying hours, sometimes 7:30 am, other times well after 8:00 am (note to self #4 … “I wonder what time they start serving breakfast?”). The Tibetan bread, which became my morning staple, with locally made peanut butter (70 rupees/$1.15) was tasty and a pot of milk coffee (warm milk with varying degrees of instant coffee added) set me back another 80 rupees/$1.30, so $2.50 seemed fair enough (note to self #5) for a decent, not great breakfast.


I quickly became exhausted by and very concerned (see note to self #1) about the hundreds of stairs from Pink House up to Jogiwara Road. Being a disabled Veteran with very bad knees and back, the stairs, which are extremely dangerous by day and treacherous by night (very little light), vary widely in height, have loose or missing rocks and bricks (many steps are crumbling), and many are constantly soaked with the water escaping from the numerous pipes crisscrossing the steps (another tripping hazard). I stumbled on several occasions due to varying heights and uneven surfaces, twisting my knee on one occasion and nearly tumbling head over heel down the steep incline on a few others. Having made a commitment to stay long-term (I was visiting for 7 weeks and received a small discount on my room), I decided to stick it out until I felt my health or life was in danger.

Pink House staff are very friendly and helpful most of the time. Rooms can be cleaned if you make the journey to floor number 4 to drop off your key in the morning and inexpensive laundry services are also available ($1.00 to $2.50 for a few shirts, pants, socks, and undies), dropping items off (again on the 4th floor) in the morning and picking them up the same evening.

Being November and at an altitude of over 5,750 feet (1,750 meters), days were very comfortable when in the sun (plentiful this time of year) and a bit chilly in the shade, but nights dipped into the 30s and 40s and the rooms quickly became very cold (see note to self #2). In-fact, I had not seen a heater anywhere in India since my arrival, including restaurants, other businesses, and hotels, which may not have been an issue in Delhi, but made for some mildly uncomfortable experiences in the mountains. After a nearly two weeks of freezing my bum off in the middle of the night when I had to use the toilet (loo) and in the morning, I asked about the possibility of getting a heater in my room, but was told “you have two blankets don’t you?”. I decided to suffer a little rather than make an issue out of it because the steps were making it likely I would not be there much longer anyway.

The Wi-Fi signals were great due to the routers on each floor, but unfortunately the internet was extremely slow (note to self #3). Being an avid blogger, TripAdvisor “Top Contributor”, and wanting to upload reviews and photos, as well as keep in contact with my family and friends via Skype and Facetime, the Wi-Fi was woefully inadequate. Beside the numerous and frequent power outages in McLeod Ganj which resulted in no Wi-Fi (or TV), the Wi-Fi quickly became an issue due to the inordinate amount of time it took to do anything and the frustration caused by Skype and Facetime calls home where I could only hear every fifth word being said. 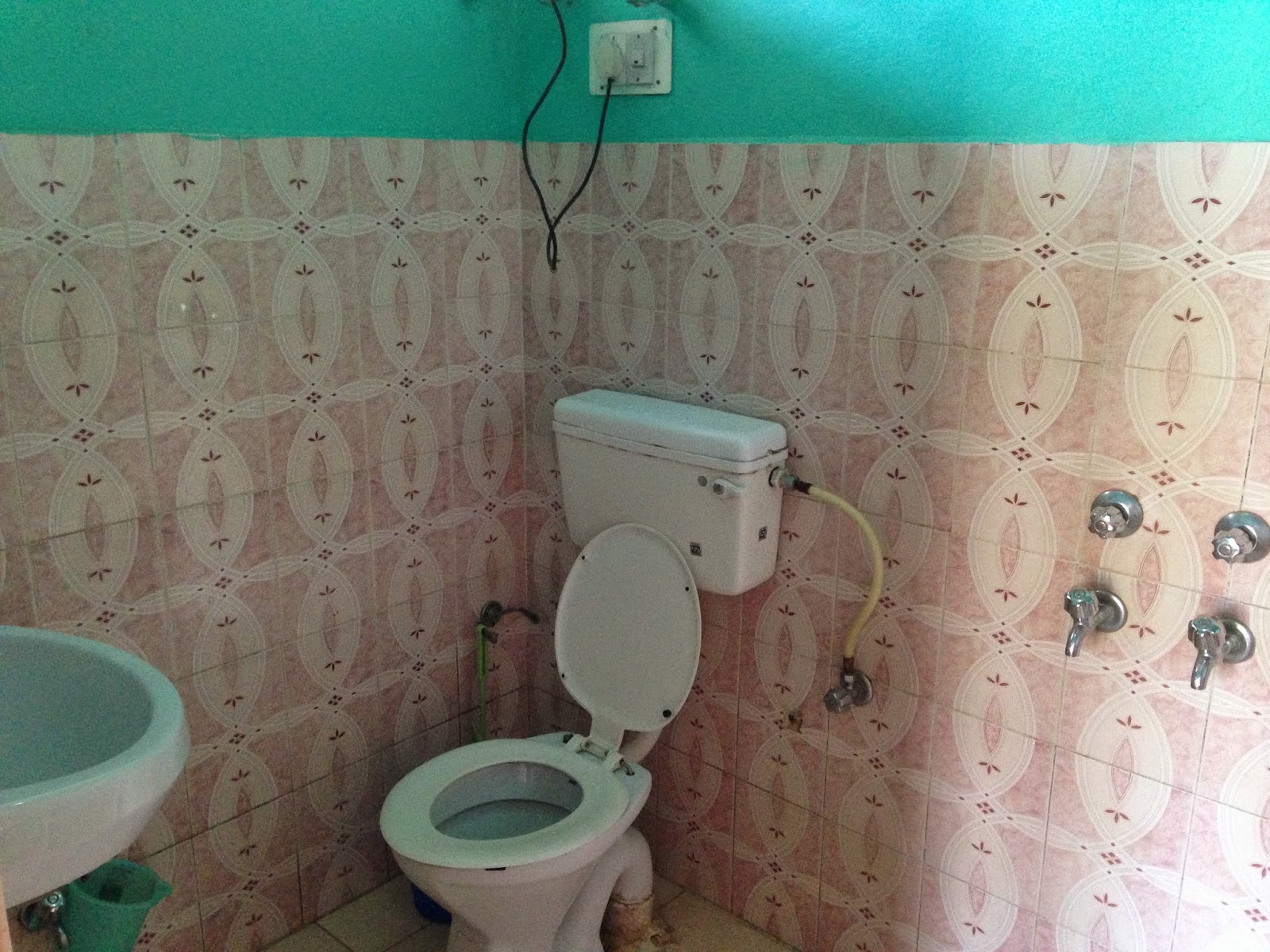 Again, after the first few days, I decided to move indoors to the “relative” warmth of my room for breakfast, not knowing when the servers would arrive on the roof each morning (note to self #4). I asked when breakfast was available each morning and was told 7:30 am, but I found that the staff in general do not seem to awake early because when I called at 7:30 sharp each morning I either spoke to someone who had obviously been awakened by my call (staff sleep in the reception office, which is not on the ground floor, but on the 4th floor next to the rooftop café) or someone else who barely spoke English. Most of the time, my breakfast arrived within 15 minutes and the young men delivering it were friendly and helpful. However, on a few occasions my order did not arrive after 45 minutes to an hour, causing frustration and late arrival to my 9:00 am (not including the nearly 30 minute walk UP THE HUNDREDS OF STEPS and down Jogiwara Road from McLeod Ganj) Buddhist Philosophy class at the Library of Tibetan Works and Archive. I also inquired about an early breakfast during the Dalai Lama’s teachings (November 11-13 2014 – 8am – 12pm daily with arrival NLT 7:30am), but was told “the kitchen opens at 7:30am” … maybe), so I ordered my breakfast the night before and drank cold coffee and ate stale Tibetan bread for three days. After 20 years in the Air Force, I have experienced worse conditions.

I never ate anything at Pink House other than breakfast because I avoided navigating the dreaded steps except for a trip up each morning and one down each night. The menu was extensive and from what I saw the food looked pretty good, but the value is questionable based on my breakfast costs and comparable meals in town. Having paid $2.50 for a small pot of weak coffee, a piece of local bread that can be purchased for 10 rupees (16 cents) in town, and a tablespoon of peanut butter, in comparison to the wonderful $3.00 dinners I regularly ate, the food did not seem like such a great value after all.

After 3 weeks, I had enough of the treacherous stairs, painful knees, and risk to my existence on Earth, the widely varying and undependable breakfast hours (they probably got tired of me waking them up every morning at 7:30), and the very slow Wi-Fi, so I decided to find a place closer to the road, the Tibetan Library, town, and my yoga instructor … mostly the deadly stairs … finding a comparable room and view at less than half of the price (333 rupees per night or $5.35), being centrally located between destinations WITH NO STEPS!

At first glance and in terms of western standards and prices, Pink House appears to be an exceptional value at $10-$20 per night, but comparatively speaking in McLeod Ganj and Dharamsala, that did not necessarily turn out to be the case. The longer I stayed in the area and the more people I spoke to, the more I realized that Pink House was one of the more expensive and isolated places in town. A Buddhist monk friend paid 2,00o rupees per month ($32.00) for his centrally located room, a basic but clean room with shared bath, and another was paying 300 rupees ($4.85) per night for a double room at a monastery just off the main market with a private bath, so $15 per night was quite expensive in this neck of the woods.

Like Jessica1100 (TripAdvisor), my 880 rupee ($14) deposit was not applied to my bill at check-out even though it was meticulously itemized down to the rupee, taking close to 20 minutes even though I told them I would be checking out that morning. I am not saying that it was done intentionally, but considering that they do not accept reservations without a deposit equaling one night's stay, it should be a standard inclusion in the billing process.

If Pink House where in the U.S., Europe, Japan, or Korea (among other more expensive destinations), they would get 8 or 9 Bombs Out Of 10. But in terms of other local (India in general, Dharamsala in particular) establishments, on which I base my “VALUE” determinations, Pink House is very middle of the road. Therefore, if you have great knees, do not mind the cold or paying a bit extra for the convenience of eating in your room, and enjoy beautiful views, fair service, and in-house laundry services, then Pink House is a fair choice. But be warned, there are better values out there, particularly for those visiting for extended periods where significant discounts of 50% to 70% can be had over nightly lodging prices … and make sure your deposit is applied to your bill!