Not bad, not great. I went with my two sons who I had not seen for 6 months and, although it was a Friday night, we were seated rather quickly. Peter, our server, promptly arrived for our drink orders. We had three of their house drafts, me a Here's Your Dam IPA and my boys a McLuhr's Irish Stout and Sweet George's Brown respectively ($5 each). The beers were good, but all a bit too "smoky" for my taste, smokiness must be a Dam Brewery thing - Dam it! 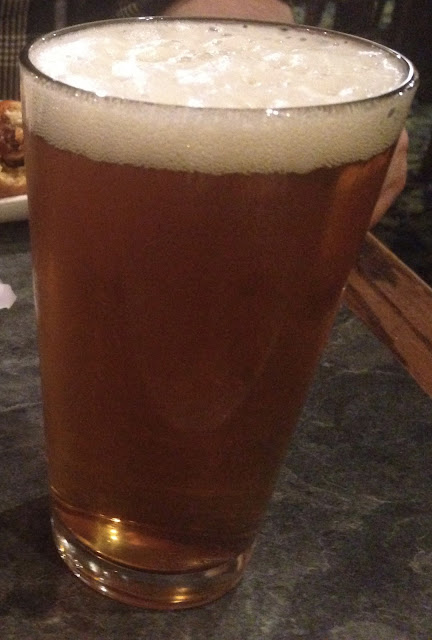 For dinner we went with sandwiches, me a "Rodeo" ($11.95) with a beef patty, cheddar, bacon, caramelized onions and Bar-B-Q sauce on the side with French fries. The burger was very basic, small and uninteresting, likely a frozen patty of 5-6 ounces max. My youngest (soon to be 29) had the Munich Schnitzel Sammy ($10.95), a breaded pork cutlet and smoked gouda on a pretzel bun, accompanied by apple slaw, beer mustard, and fries. I tasted it and it was also nothing special. A "schnitzel cordon bleu" sandwich would have been much better, but my son seemed to like it.  My oldest (30) also ordered a Rodeo but with a bison patty ($4 Extra - $15.95), with cheddar, bacon, caramelized onions and Bar-B-Q sauce, opting to swap Mexican Beer Cheese Soup for the fries. The server asked if he wanted a bowl of soup instead of a cup and my son concurred, only to find out that the price had ballooned from $15.95 to $21.20 when the check arrived. It would have been nice to have been informed of the $5.25 up-charge when placing the order, but so you have it. 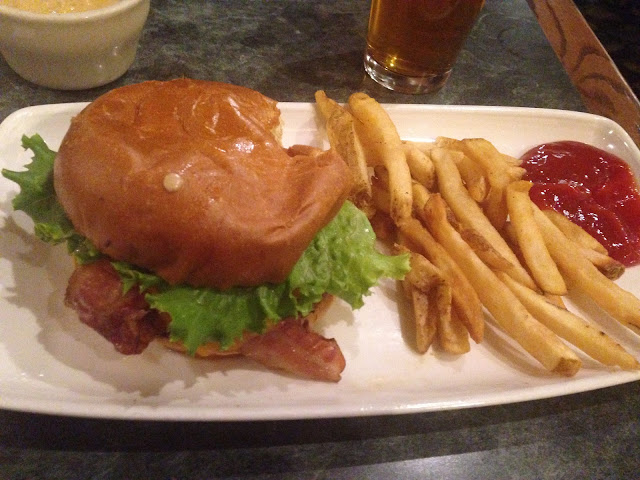 The sandwiches were decent, not great, the burger patties being a tad on the small side (± 5-6 ounces). My burger arrived with what I perceived to be no caramelized onions, so I sent it back. The server brought the dish back a few minutes later telling me that they were under the cheese while my son's had been on top of his Rodeo's cheddar cheese. Odd I thought, until the check arrived and I found out that I had not been charged for what I ordered (a Rodeo), but for a build your own burger ($9.25) with cheddar ($1.35), bacon ($1.35), caramelized onions ($1.00) for a total of $12.95, a dollar more than what I had ordered and what Peter had agreed to when I ordered it. 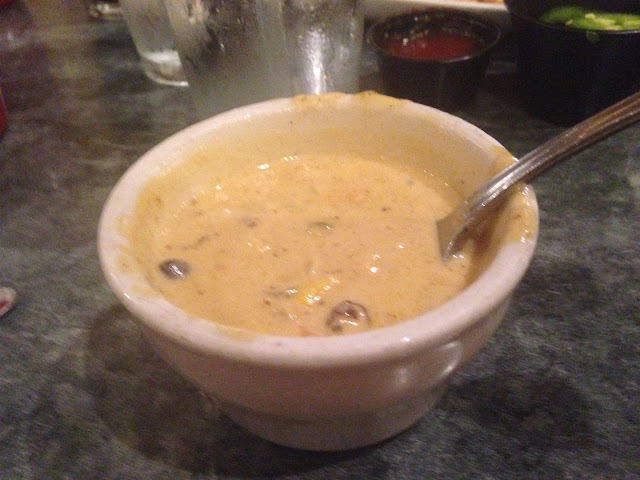 Rather than make a fuss about the unannounced upcharges, I simply deducted the amount we were overcharged from the 20% tip Peter would have received for the decent, not great, service he provided, leaving him with a respectable 16.5%. 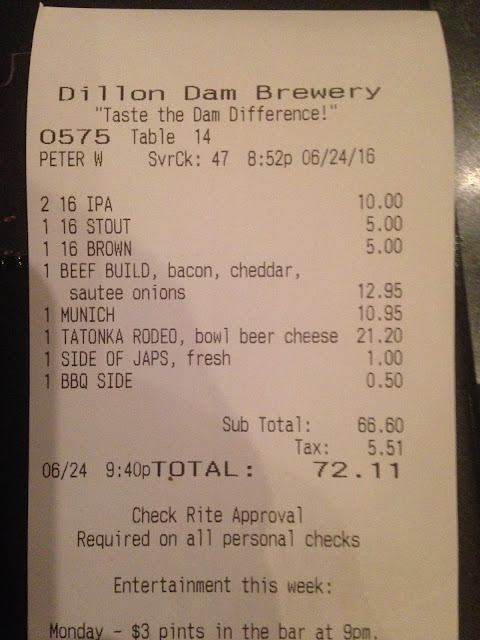 Server Lesson Learned: Give the customer what they order and, if you do not, inform them of any upcharges PRIOR to submitting their order, do not surprise us with unexpected charges when the bill arrives.

CombatCritic Gives Dillon Dam Brewery 6 Bombs Out Of 10 With Deductions For Unannounced Upcharges And Mediocre Food At Above Average Prices ... More Bombs Are Better!