Portland, OR: Do Not Miss This Swiss Delight In The Quaint Northeast Alberta Neighborhood 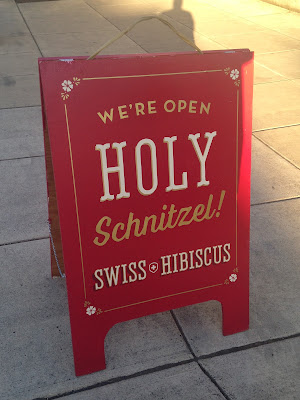 Located in the up-and-coming, trendy Alberta neighborhood of Northeast Portland, I was surprised by Swiss Hibiscus' appearance, expecting an older chalet-style building adorned with flower boxes and Swiss flags, but it is housed in a small modern, multi-purpose building a half block off of the main Alberta Street drag on 14th. The restaurant is small with only six or so tables inside (seating around 25) and another three or four outside (if the Portland weather cooperates), bringing the maximum seating to around 40 diners. A reservation is a must during prime hours and can be made by calling the number above. 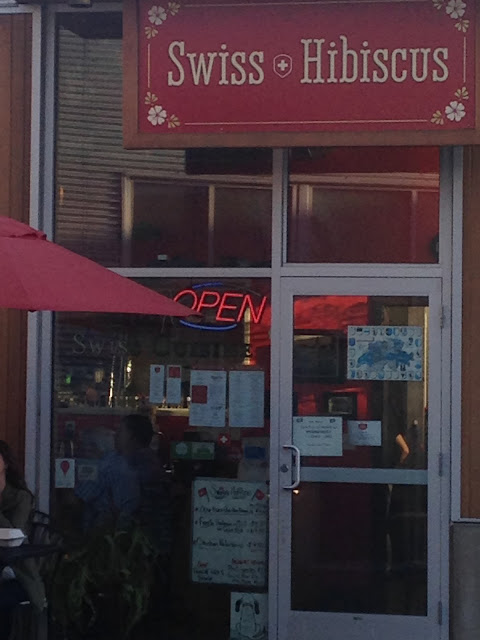 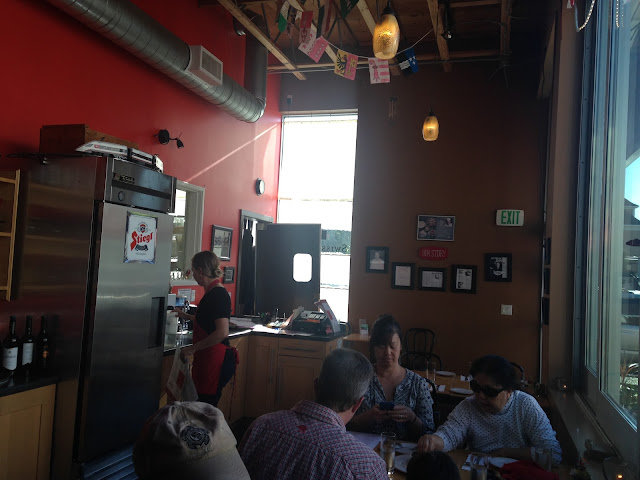 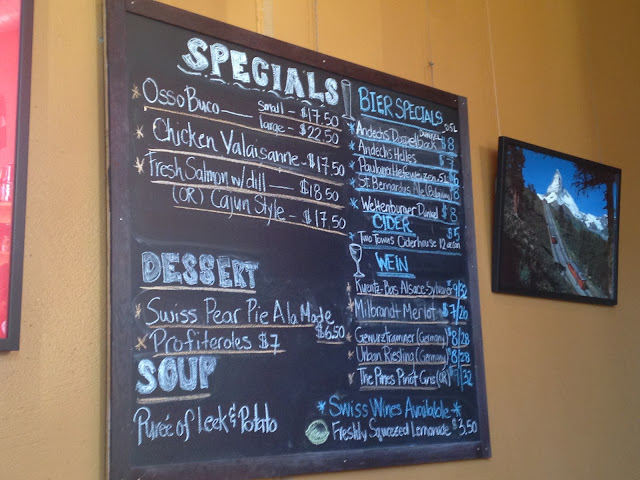 We started with the Swiss Fondue ($24) shared among three of us and there was plenty to go around. A blend of Swiss cheeses, white wine, and kirschwasser (a clear German cherry brandy), heated in a traditional fondue pot and served with plenty of chunky French bread pieces. It was a bit pricey, but delicious and as good as any fondue I have had. 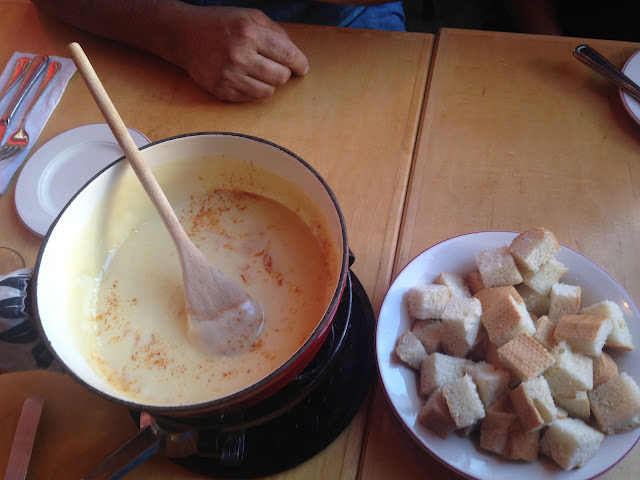 For entrees, my friend's wife had the Emince Zurichoise ($14.50), thin slices of pork sautéed in a mushroom cream sauce reminiscent of Zurich and accompanied by handmade spätzle. Each entree was preceded by a cup of soup de jour (a creamy potato leek) or house salad with their signature dressing and their crusty, piping hot French bread. 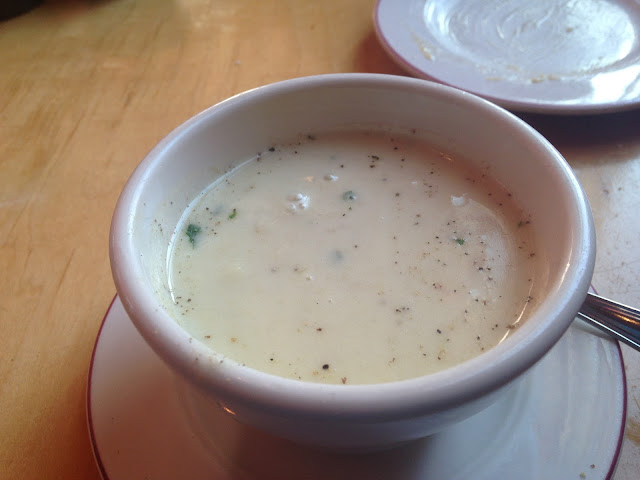 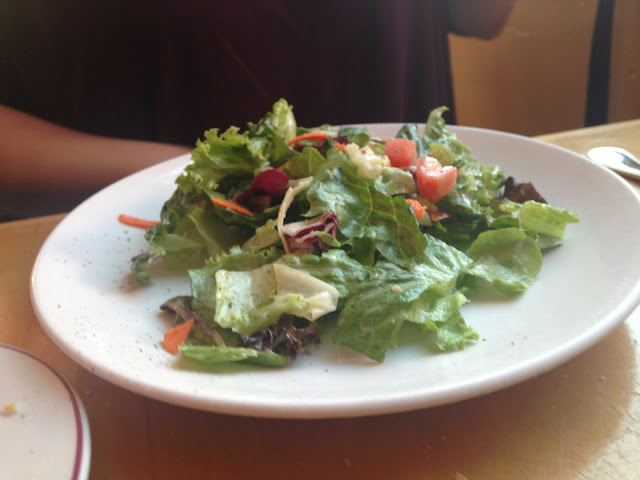 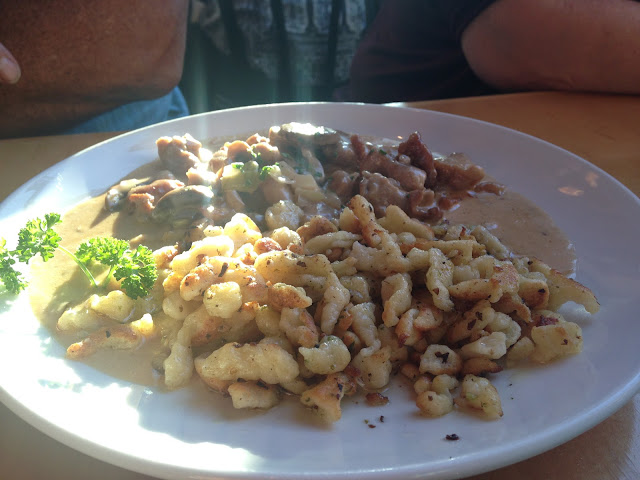 My friend Mike ordered the special of the day, Chicken Valaisanne ($17.50), two chicken breast halves smothered with sauteed tomatoes and onions and melted raclette cheese perched atop a bed of spinach and accompanies by their famous rösti, crispy Swiss hash browns infused with bacon and onions ... YUM! 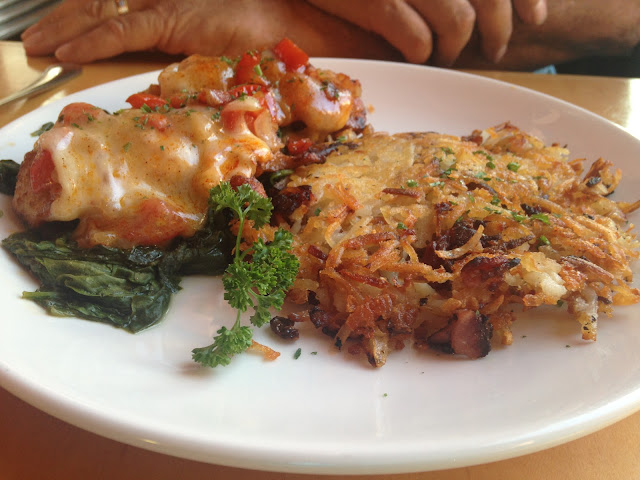 I had the traditional Wienerschnitzel ($14.50), breaded pork cutlets sautéed in and topped with browned butter. I ordered a side of the Zurichoise mushroom cream sauce ($2) for my schnitzel and rösti, a wise choice because it made for a perfect combination similar to the Rahmschnitzel sauce I have enjoyed in Germany on many occasions. The cutlets were smaller and thinner than most I have had, but after the fondue and soup, I was quite glad that they were not of the traditional behemoth variety and was able to finish my plate.


A delightful and fortunate find on Yelp, we enjoyed our meal immensely, the service was friendly and efficient, and the prices very fair for the quality of the menu offerings. The only drawbacks were the smallish size of the restaurant and the somewhat limited menu.

On a recent return trip, so my wife could experience Swiss Hibiscus having been absent on my first visit, we had a similar albeit not quite as "perfect" meal. The service was as outstanding as the first time and Bridgeport IPAs ($4) were an excellent value. 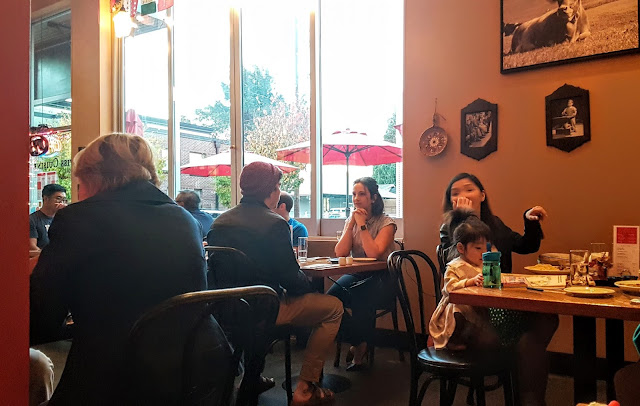 We ordered the fondue ($24) of course, which was as decadent and delicious as the first time, but the Jägerschnitzel with Chanterelles ($19.50) special was a little disappointing. Do not get me wrong, it was tasty and a very good value, coming with their yummy rösti (crispy Swiss hash browns infused with bacon and onions) as well as a wonderful cup of soup and fresh, hot bread rolls, but it untraditionally prepared and the pork was a tad tough. 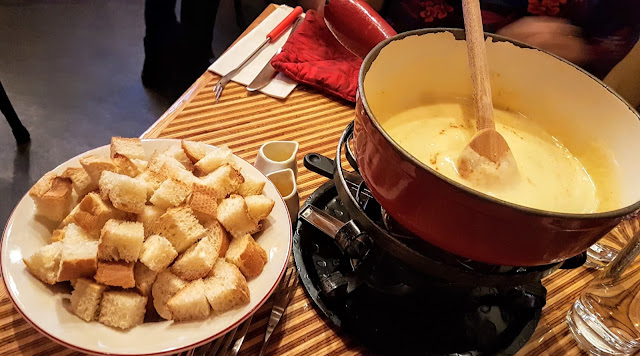 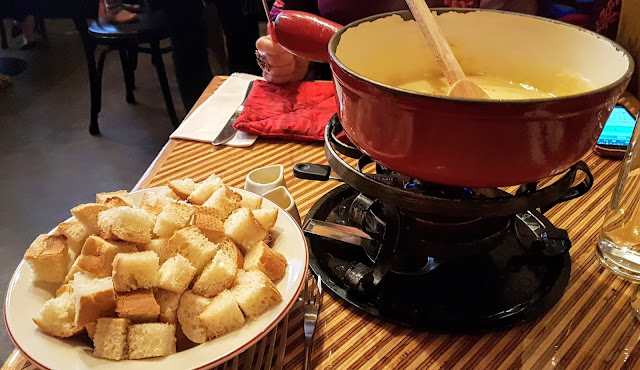 Having stuffed ourselves with bread and hot, gooey cheese, we spilt the schnitzel dinner into two reasonable portions (no split plate charge - the server actually suggested that we split it). 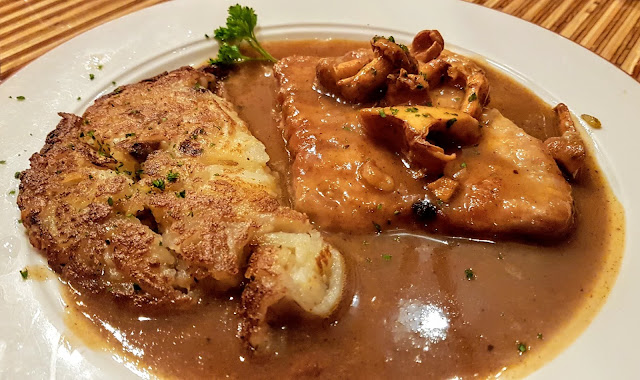 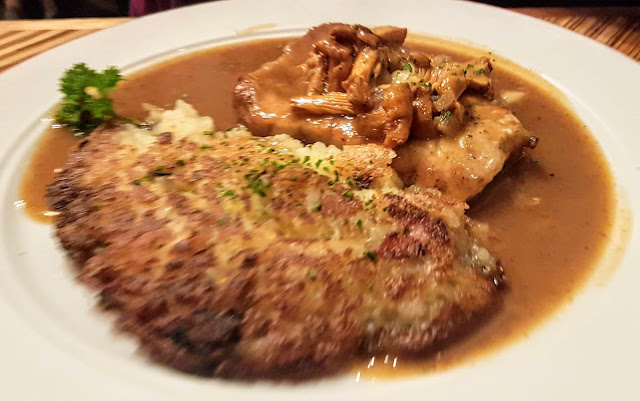 Schnitzel in normally breaded and fried, resulting in a crispy, tender boneless pork cutlet topped by a thick, rich mushroom (hunter's sauce) gravy. This cutlet came without the traditional breading and was chewier than any schnitzel I can remember having eaten ... and that has been many. The sauce itself was decent, but it was not very thick nor was it overly flavorful. 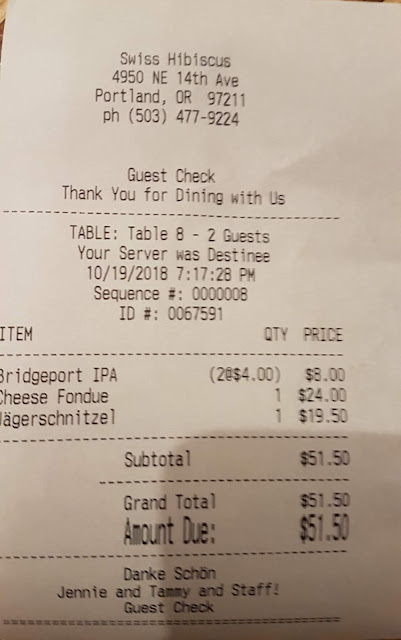 Taking this most recent trip into account, although not quite as good as the first visit, it was still an excellent meal and a very good value at a little over $60 including tip for a dinner for two, including drinks. So my rating remains unchanged ...

Title: Portland, OR: Do Not Miss This Swiss Delight In The Quaint Northeast Alberta Neighborhood