First, let me apologize for the quality of the photos in this post. Garozzo's is so dark there was not enough light to take a photo without a flash or the external light source I normally use and I did not want to disturb our fellow diners so that I could take a decent photo ... sorry!

We have been to Garozzo's several times, but this was the first in about four years and since I started this blog. The food was always good, a bit pricey, but solid Italian food in a nice, but too dark and pretentious atmosphere. I say pretentious because the food screams "mom and pop" Italian restaurant, not upscale, fancy shmancy with servers (mostly waiters) dressed to the nines and with attitudes to match.

This visit was no different. Good food, a room too dark to read the menu, a table too small to hold our food and drinks, and a waiter that was courteous, but all business, and a bit too eager to get rid of us and earn some extra tips. When you drop a C-note for dinner for two, you should not be rushed through your meal. We were.

I will not use the server's name, but we were quickly welcomed, being the first diners at 5:30pm on a Tuesday after attending the closing for the sale of our home and celebrating with a nice dinner out. My wife and I were talking, but the server seemed eager to take our order, interrupting our conversation to ask what we wanted to drink. I asked for water and a bottle of their house cabernet sauvignon ($24).

After bringing our drinks, again interrupting our conversation, I ordered a stuffed artichoke as an appetizer (antipasto) and for entrees my wife requested the Tortelloni Gina and I the Veal Parmigiana. I asked the server if the dinners came with salad and pasta (in my case) as I seemed to remember salad coming with the entrees the last time we were there. I was either wrong or they had changed their policies because the server told me that a salad was "an additional $4". The veal did come with a "small serving of pasta with Maggie's Sugo" I was told.

My wife and I returned to our conversation, but about five minutes later I realized that we had not ordered our salads, my mistake, so I asked my wife to get our server's attention, which she quickly did. I said, "I'm sorry, but we forgot to order salads", to which he replied, "well, I already put you dinner orders in, but I can take care of that with the kitchen". My wife ordered the Insalata Caesar ($4) and I the Insalata Santa Teresa ($4). 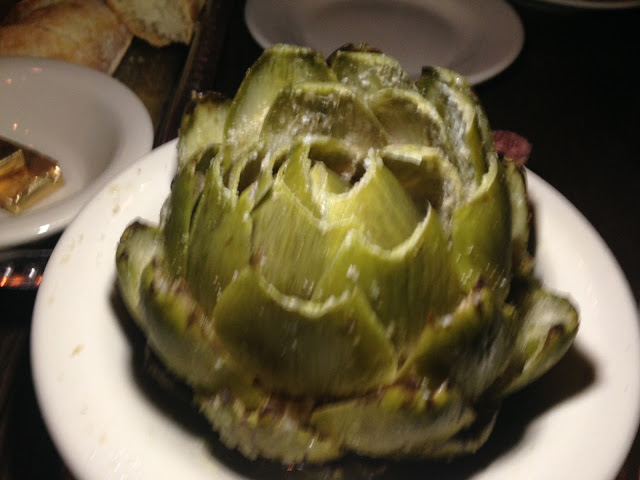 The cabernet was actually quite good, from a California winery they prominently feature on their wine list. The artichoke ($10), stuffed with seasoned breadcrumbs, steamed, and topped with garlic butter, quickly arrived and we dug right in. My grandmother used to make similar stuffed artichokes, except she used olive oil instead of butter and added small chunks of salami, but these were very good with tasty stuffing and large tender leaves. We were not even halfway through eating our artichoke when our server arrived with our salads. As a former waiter myself, there is nothing that pisses me off more than a server who brings the next course when we have not even finished the last, but I bit my tongue because it really did not matter that much because the salads were not going to get cold while sitting on the table, which they did for another 10-15 minutes while we finished our antipasto. The table, by the way, was so small (like all of the tables for two) that the server had difficulty finding space for our premature salads.

My wife then started eating her Caesar salad, waiting for her favorite part, the heart, while I polished off the last few leaves of the artichoke. She finished her salad, which she said was "nothing special", in the interim and I, after the server cleared a few plates, then started eating mine. About halfway through my salad, which was good, with Romaine lettuce, red onion, chunks of goat cheese, Dijon vinaigrette, and topped with sliced roasted red peppers, but unremarkable, the server arrived with my wife's Tortelloni Gina. That was the straw that broke the proverbial camel's back, so I asked our server: "Are we in a hurry?", to which he replied, "oh, I'm sorry, let me take that away". I proceeded to finish my salad. 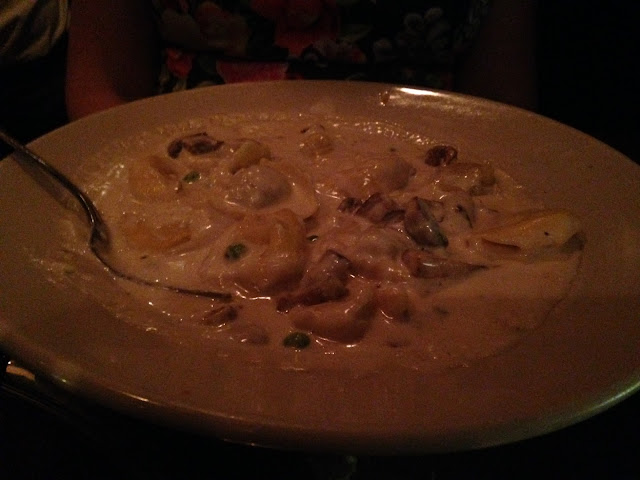 Hovering, waiting for me to finish, when the server saw my salad plate was empty, he quickly swept the plate away and returned a few minutes later with our entrees. My wife's Tortelloni Gina ($19) was filled with chicken and prosciutto, and served in a very traditional creamy Alfredo sauce with mushrooms and peas. It was hot, very large, extremely rich, and my wife, who was born in Italy, enjoyed it very much. Bravo! The server had tried to sway me away from the Veal Parmigiano (veal parmesan to you Olive Garden lovers), recommending the Vitello Spiedini Sophia Marie ($27) instead. Because I have had every other veal dish at Garozzo's, including the veal Sophia Maria and Saltimbocca ($27), which are both excellent by the way, I wanted to try the Vitello Parmigiana ($24), my failsafe in Italian restaurants and a good indicator of the quality of an Italian-American kitchen (you will not find veal parmigiano in Italy unless the restaurant caters to Americans). 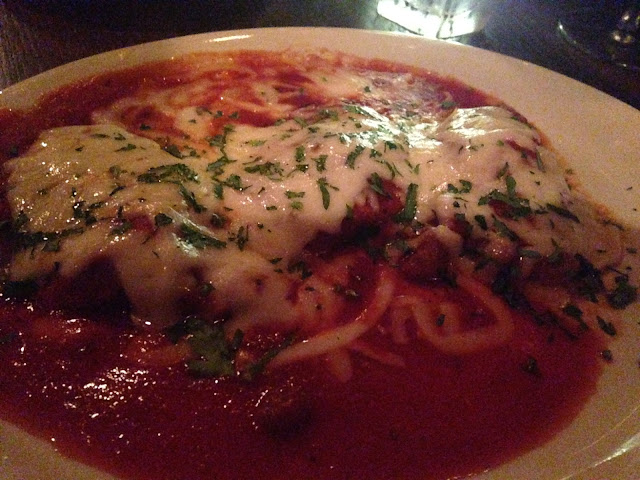 The veal was lukewarm at best, with three very small medallions topped with the house red sauce and fontina cheese, a bit odd as "parmigiana" is usually topped with mozzarella, baked or broiled, and sprinkled with parmigiana (parmesan cheese), hence the name. The sauce was very good in comparison to most stateside Italian restaurants, but the dish would have been much better had it been served hot, warm even, and with a bit more veal. The accompanying pasta was negligible and obviously came out of a bag or box. At $24 for just an entree, $30 including salad, it would have been a poor value, even if it had been served at the appropriate temperature. 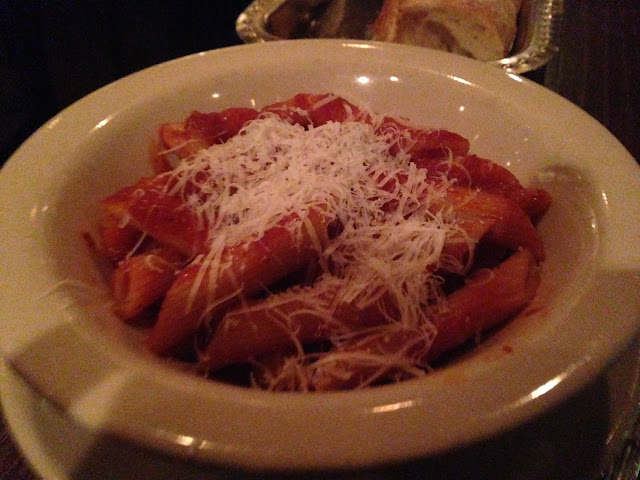 I understand that it was my mistake, asking for salads five minutes after our order was taken, but our server said he would "take care of it", as he should have. There is no excuse for bringing multiple or mixed courses, particularly in an "upscale" restaurant such as Garozzo's. There is also no excuse for serving a $24 veal dish cold, no matter what the circumstances.

I like the place in general, but Garozzo's would be much better if they dropped the pretenses, brought up the lights, bought some bigger tables, and lowered the prices a tad. I also believe that customers should NEVER be rushed, especially when they are paying $50 a head and up for a meal.

Translation for Civilians: Charlie-Mike = "Continue Mission"
Author: CombatCritic at 9:34:00 AM