Amy and Daisuke Matsumoto ran Pizzeria Las Sorrentina out of a trailer in NW Vancouver, but decided it was time to expand across town to the southwest part of town and am I glad they did! 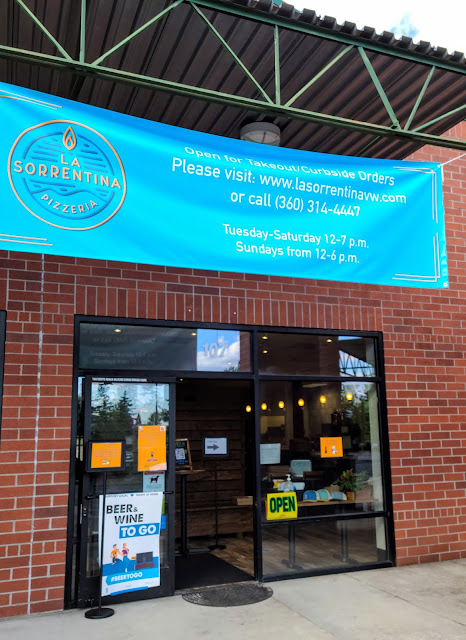 We had a bad experience last year, having driven 20 miles to try their famous pizza Napoletana (Naples, Italy style), but were turned away just 2 minutes after closing. I was unhappy, but Daisuke and I messaged back and forth, got to know each other, and I promised I would give them another try. We were there last Sunday on just their second night of dine-in service.

I never knew many of these businesses existed because their backs are on 164th, so it took some time to find the place, even with Google Maps.  The pizzeria is in a large, new space with a big dining room, huge kitchen, and massive patio out back on 164th (that will be open soon). With COVID-19 social distancing protocols in place, less than half the tables were available and the counter/bar was closed altogether. They are still in the process of decorating and expanding the menu, but the place is attractive and they have a nice selection of appetizers (antipasti), salads (insalate), pizzas (pizze), pastas (tipi di pasta), and desserts (dolci) although I do not recall seeing a drink menu.

We were warmly greeted by a young lady in a mask and seated by the exit to the patio. Menus are a no-no during the crisis, so you have to scan a barcode upon entry in order to view their offerings. I decided on the Pizza Diavola ($16 - in the devils way), my tomato-hating wife ordered the Pizza Quattro Formaggi ($15 - four cheeses), my son got the traditional Pizza Margherita ($12 - named after Queen Margherita of Italy and is red, white, and green in honor of the Italian flag), and his fiancè the Pizza Marinara with veggies ($12 - vegan).

All of the pizzas were Neapolitan size, bigger than most individual 'wood-fired' pizzas you get in the US, and looked just like the hundreds I have eaten in Napoli (Naples - I was stationed there for 3 years, having met my wife, a Sicilian, in 2000). I tried my wife's pizza and it was quite tasty, a fact we both agreed on, and a thumbs-up from someone who grew up in Naples, the birthplace of pizza, is high praise indeed. My son's and his fiancès pizzas were perfectly cooked as well and they both raved about them. Daisuke was trained as a pizzaiuolo (pizza maker) in Naples where the ingredients and baking methods for Neapolitan pizza are strictly regulated. 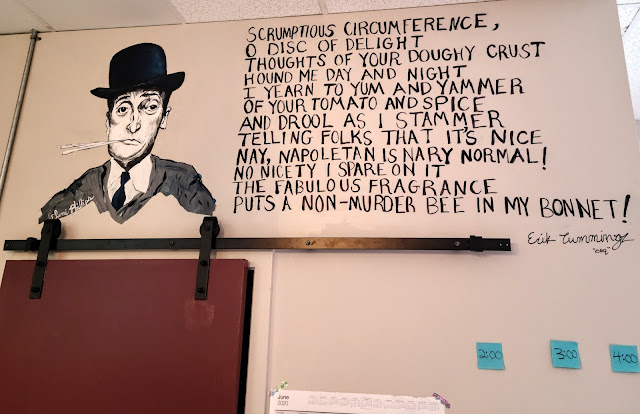 I consider myself a bit of an aficionado when it comes to pizza Napoletana, having been trained as a chef (in my spare time) during my three years living there and attended a Vera Pizza Napoletana (true Neapolitan pizza) course in 2019. Therefore, I am a certified pizzaiuolo in my own right. 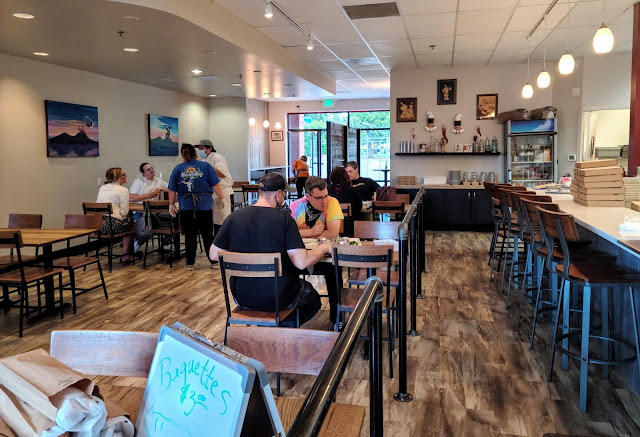 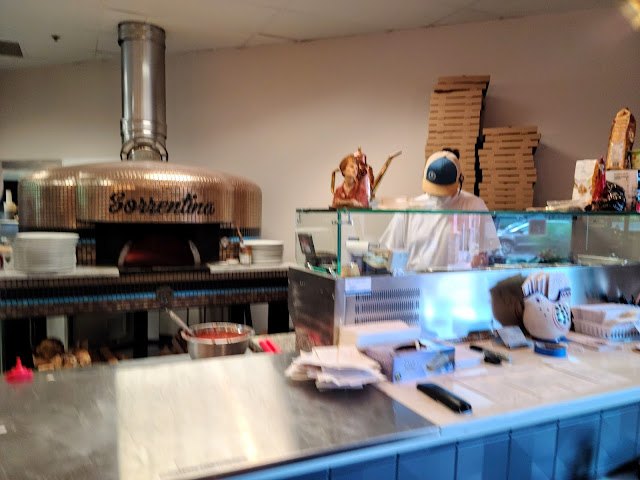 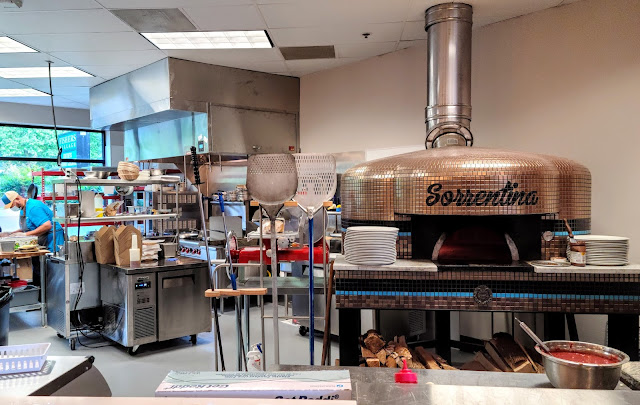 Pizza diavola is one of my favorites, along with pizza con salsiccia e friarielli (sausage and sautéed broccoli rabe, a Neapolitan specialty), so I am used to having it prepared in a certain way because pizzaiuoli (plural) in Naples DO NOT experiment with recipes. You will not get pineapple, chicken, or BBQ sauce on your pizza in Naples, no matter how much you whine.

Diavola (the devil's way) refers to the olio piccante (EVO mixed with hot peppers and left to soak for months) sprinkled liberally over a Margherita pizza topped with sliced salami. Daisuke's diavola comes with 'mama lil’ peppers', which I thought were hot, spicy peppers like those in olio piccante, but they were not. Instead, I got diced red bell peppers in a very slightly spicy agrodolce (sweet and sour) sauce on top of mine, not quite what I was expecting. It was good, but I am not a huge sweet and sour kinda guy and mama lil' peppers overwhelmed the pizza so that I could barely detect the wonderful mozzarella and salami. I had to ask for some olio piccante to spice-up the pizza and was a tad disappointed because it was not what I was expecting. 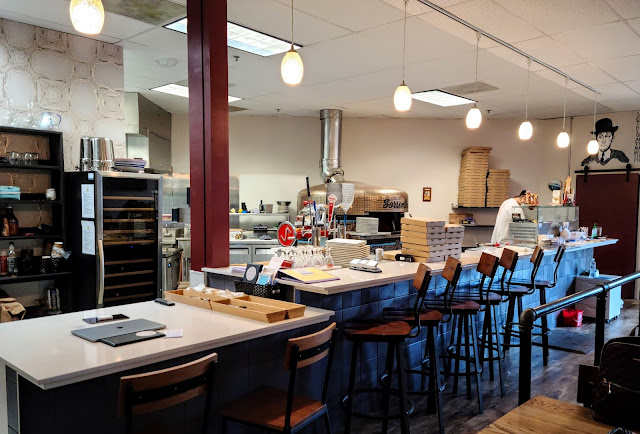 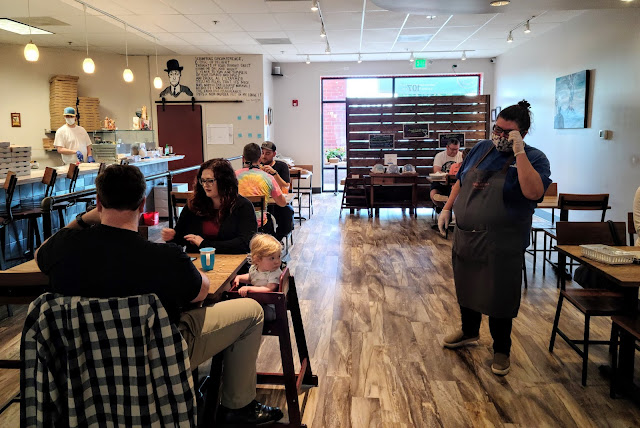 The pizzas are moderately priced by West Coast standards, so I will not ding them there, but, for comparison, a top-notch pizza diavola in Naples goes for around $5.65 and a Margherita is just $4.50 most places, a little less than one-third of La Sorrentina's prices. We did not have any appetizers, drinks (except water), or dessert (even though Daisuke was kind enough to offer) and the total for four came to $51 and change (not including tip), a reasonably priced Father's Day meal in the Portland area.
I am looking forward to returning to try new and different things, and I hope that Daisuke and Amy are hugely successful in their brand new location. The COVID crisis has decimated many restaurants and businesses, an extremely difficult industry in any case, but I believe La Sorrentina will flourish in their new location.
I have just two recommendations: 1) Lose the 'mama lil' peppers' and drizzle olio piccante on your salami pizza to make it a true 'diavola'; and 2) add a Pizza con Salsiccia e Friarielli to the menu.

In bocca al lupo Daisuke (literally, 'in the mouth of the wolf' - an Italian phrase for good luck, to which you should always respond 'crepe', not with a 'thank you' because that would reverse your luck)!