Lawrence, Kansas: One Of The Best (Not Tex-Mex) Mexican Restaurants In Town? Not Much To Brag About!

To be the BEST MEXICAN FOOD IN LAWRENCE the bar must not be set very high as I have yet to have a Mexican meal as good as the worst I have eaten in Texas, where I was a resident for 20 years, and not a single one comes close to resembling Tex-Mex. On that note, let me add my two cents ...

The place was nearly full on a Sunday night, a rarity in Lawrence, particularly among Mexican restaurants, and normally a good sign. We were steered into the bar for some reason, asked if we wanted to sit at a "high-top" even though there were booths available in the bar and tables available in the restaurant. Maybe I look like a lush, but I think it was primarily because there was nobody in the bar and the bartender needed something to do. The lush that I am, I ordered the margarita special ($7.99), described as containing "El Jimador" tequila and not bad although the "20 ounces" were more like 13, coming in the standard "cheater" glass that looks big on the outside ... well, you know what I mean. The house "grande" margarita ($6.25) was a better value, coming in the "20 ounce" glass but like its El Jimador cousin, a bit weak in terms of alcohol content.

The chips and salsa arrived rather quickly, the chips being far too thin and very likely out of a bag along with a red salsa and an odd looking yellowish-green sauce. The salsa was not bad with obvious hints of fresh cilantro. The other, described by one reviewer as a "lemon avocado" sauce, was strange, unlike anything I have ever had in a Mexican restaurant, but again not bad. The chips are so thin that they cannot be dipped in the salsa, which is not very thick to begin with, without breaking apart, leaving the basket more than half full of pieces of chips too small to eat. 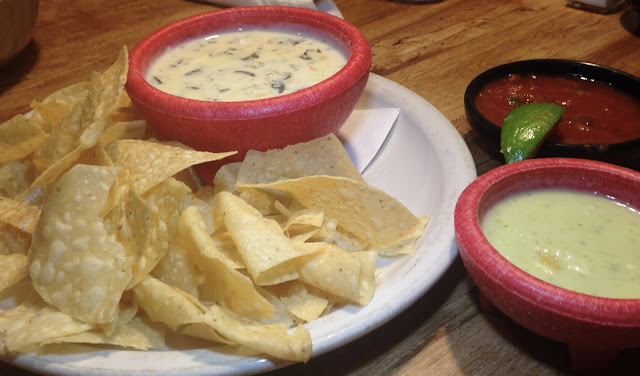 We decided on the Espinaca Cheese Dip ($5.99), a blend of hot cheese, white onions, tomatoes and spinach, and the guacamole ($6.99). The guacamole was described as "fresh and buttery avocados, cilantro, jalapeños, onions, lime juice and special spices" on the menu, but I found no evidence of either cilantro or jalapeño (or butter for that matter). I thought the price was a quite steep compared to other places in town, but the serving was large and the guacamole pretty good, not nearly as good as mine however. You can get a half and side order ($1.99) of guacamole which are not on the menu and I was told that the half order was $3.99, reasonable considering the price of the full order, but when the bill came I was charged $5.25, the equivalent of $10.50 for a full order. When I complained about the higher price, management quickly apologized and charged me the quoted $3.99 price, but insisted that $5.25 was the correct price. He told me hat he would "take it up with the company" (remember, this is a chain) to see about implementing a reasonable price. 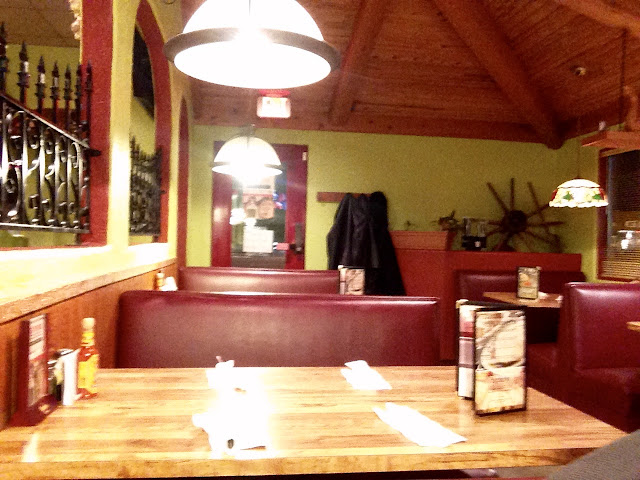 The "espinaca" (spinach) cheese dip had too little spinach, much less name the dish after it, to mention and seemed to be more like your average chili con queso minus the chili, but it was big and decent. Again, my primary complaint being that the chips were too thin to withstand either "dip", falling apart when submerged in either and resulting in a basket full of crumbles with very few whole chips.
Like most Italians my wife dislikes spicy food, especially Mexican (one of my favorites), ordering her standard "cheese quesadilla" ... boring! At $7.99, I have to say that this was one of the most pitiful quesadillas I have ever seen and a terrible value. Charging $8 for a (small) flour tortilla, a couple ounces of cheese, a spoonful of sour cream and even less guacamole, and a thimbleful of pico de gallo (which was noticeably missing from the plate even though it is on the menu) should be a crime, highway robbery, but it's not, so there you go.

As always, on my first visit to a Mexican restaurant, I ordered tacos and enchiladas to see if they could get even the simplest of recipes right, in this case el numero nueve, the #9 combo, with a burrito, taco, and enchilada, "machaca" (shredded beef) all. I have to say that the taco was the best I have had in recent years, having lived in the Midwest since 2008, being large, stuffed with plenty of machaca, deep fried, then topped with lettuce, cheese, and even some diced tomatoes. It would have been nearly perfect if the taco had a couple of thin slices of avocado on it, but we had plenty of guacamole leftover so it was not an issue, although a very good idea. The enchilada and burrito were both equally stuffed with shredded beef, but uninspiring with little to no cheese and smothered seemingly in the same red (enchilada?) sauce. The rice and beans were minimal, sprinkled with kernels of corn oddly enough and two deep-fried masa de maiz (corn meal dough) balls, another novelty ... could it be Tex-Mex ... not! The masa balls are excessively sweet and do not compliment the meals, so I would reduce the sugar or 86 them altogether. Beside the masa balls, everything was "OK", but the taco was the star of the show and likely a staple if we return.

You can order ala carte although you would not know it from looking at the menu. I asked if I could order a cheese and onion enchilada ala carte and was told it would cost $3.19 plus tax, not unreasonable, so I decided to try one. The sauce was decent, but missing the distinct chili zing of a traditional enchilada sauce and the chili con carne you would find in authentic Tex-Mex cuisine. The cheese inside was plentiful, but a bit too runny, making it a little difficult to eat and there was not an onion in sight (or bite for that matter). Overall, it was not the best enchilada I have eaten and not the worst, but it was definitely NOT a cheese and ONION enchilada.

We have returned a few times per month and the food is still OK, but we have had problems with our orders in relation to my wife's tomato allergy. On two occasions, one just a few days ago, we specifically ordered my wife's meal WITHOUT tomato, telling them that she is "allergic" to tomatoes, yet her deep fried tacos arrived with tomatoes inside. Fortunately, she always checks for tomato before digging in as she did in both cases. The server and manager reacted appropriately on both occasions, removing the plate, having a new dish made, and not charging us for the dish because of the mistakes. However, that does not solve the problem of people with food allergies getting food they are allergic to after making a special request. My wife will not die if she eats tomatoes, but she will get sick, however, some people's allergies can be life threatening (nut allergies for example) and this should be an area of great concern for management and owners. One death due to poor attention to detail in the kitchen would not only be a travesty, it could very well be the end of Mi Ranchito in Lawrence.
Overall, service is very good and management is very responsive to customer concerns, all bending over backward to make things right and a breath of fresh air in an industry suffering from apathetic servers and managers. The prices were comparably a bit steep, except for the combinations oddly enough, the service good, and the food decent, maybe even one of the BEST MEXICAN RESTAURANTS IN LAWRENCE, but that is nothing to brag about!

Title: One Of The Best (Not Tex-Mex) Mexican Restaurants in Lawrence ... Not Much To Brag About!