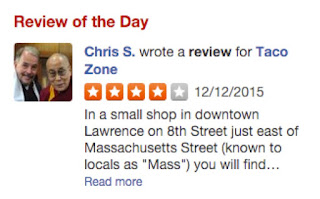 In a small shop in downtown Lawrence on 8th Street just east of Massachusetts Street (known to locals as "Mass") you will find Taco Zone's new location. Having originated in the back of a bar a few blocks up the street on Mass, they have apparently done well enough to rate their own space. Yelp reviews have been very favorable so far, so we decided to give them a try.

Being a self-proclaimed guacamole connoisseur and aficionado (and legend in my own mind), we had to start with the Guacamole and Chips ($5). At first glance, the guacamole was a bit on the small side for the price, maybe half an avocado's worth ($.75 retail) at best considering, like many restaurants, they use tomato as an ingredient and "filler". Having grown up in California with its rich Mexican influence, tomatoes are not routinely used in guacamole and, I believe, they detract from the essence of the almighty avocado. Beside being on the puny side, the guacamole was not bad, the avocados ripe and, unlike many commercial varieties, it was well seasoned. The chips were obviously made in-house, perfectly crisp and a deep golden brown. Tortilla chips need just the right amount of salt and my wife and I normally have to add salt to restaurant tortilla chips, but these were over-salted, detracting from otherwise nearly perfect taste. Close on both counts, but unfortunately no cigar. 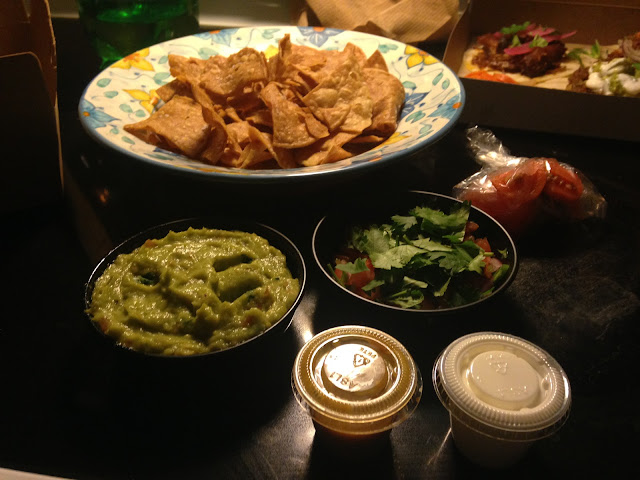 The menu selections are very limited. You can get tacos (3), a burrito, a torta (Mexican-style sandwich), nachos, or their "special", which in this case was a roasted pork and green chili soup, all at $7 a pop. Meals are not accompanied by rice or beans, in-fact they are not even an option. I am not a big rice fan, but a traditional side or two, such as borracho (the word for "drunk" due to beer being a primary ingredient) or charro ("horseman" or "cowboy") beans would be a nice option. 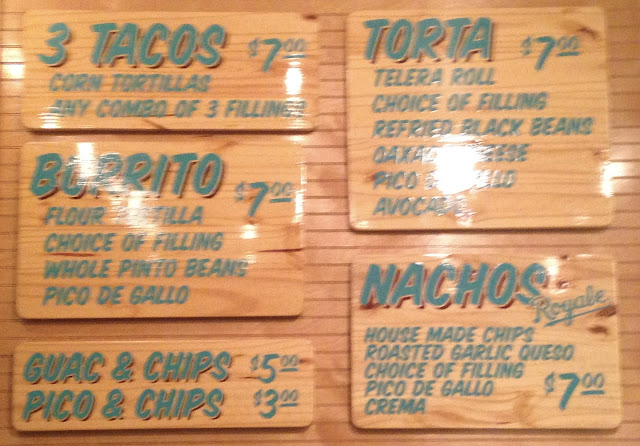 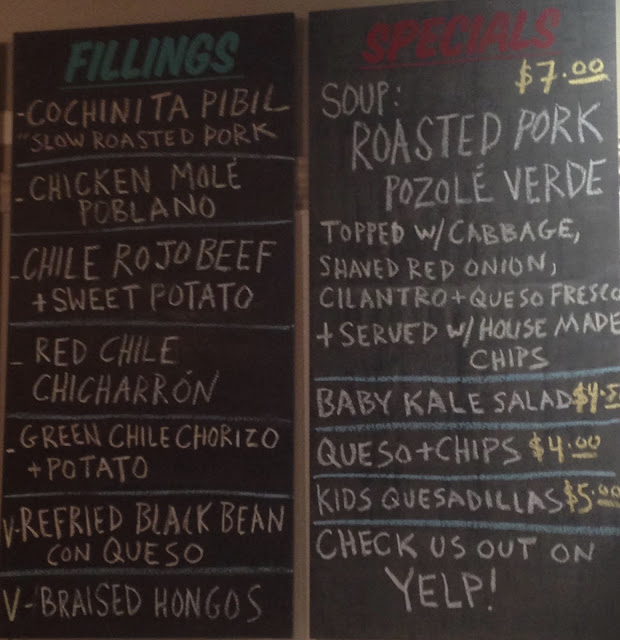 Being our first visit, we tried the tacos and nachos for our entrees at $7 each. You get three tacos in a box with your choice of three of the seven somewhat unusual filling options. I say unusual only because these are, for the most part, uncommon taco combinations (beef and sweet potato, mole and poblano pepper, chorizo and potato) or ingredients (mole, sweet potato, potato, and cheese). I ordered one each taco cochinita pibil (pork, normally pigling, marinated in citrus juice with achiote seed), chile rojo beef and sweet potato, and green chile chorizo and potato. The nachos came with cochinita pibil and roasted garlic queso because my wife does not like pico de gallo (tomato in particular) or crema (cream, sour cream), both of which were included. 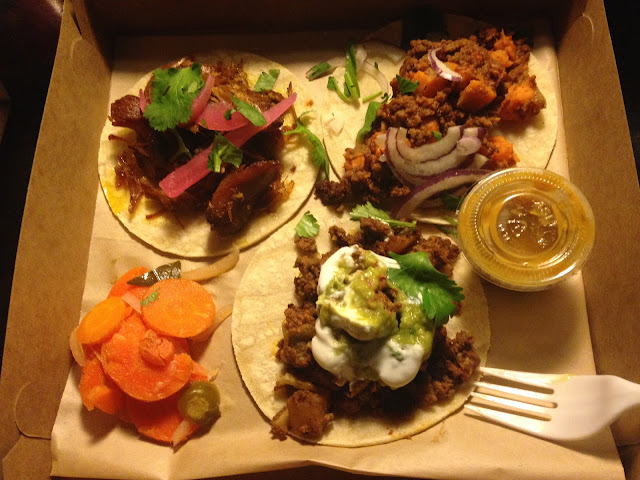 Each taco came with one tortilla instead of the usual two and they were a tad small, coming in at around 3.5 to 4 inches max, so the fillings appeared to be more substantial than they actually were. I am not positive if the corn tortillas are made on the premises or are purchased elsewhere, but they were good and thick enough that they held up well without falling apart, so two would have been overkill in this case. The cochinita pibil was topped with pickled carrot, the beef and sweet potato with sliced red onion, the chorizo with diced green chile and sour cream, and all were topped with too little chopped cilantro. There was a small container of a reddish salsa verde on the side which was obviously not store-bought and was neither too mild nor too hot (spicy). The cochinita pibil was tasty although a bit too dry and the other two were palatable enough, but could have done without the potatoes altogether in my opinion. Like the tomatoes in the guacamole, they seemed to serve more as a filler, saving the house some money rather than enhancing the culinary experience. 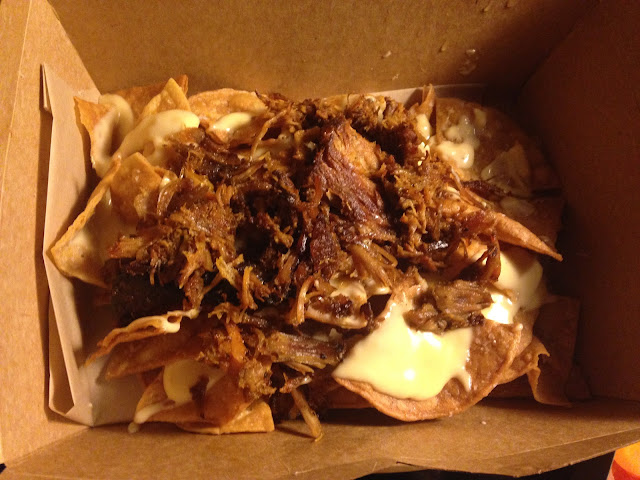 The nachos came in a similar size, but deeper cardboard box with the same good, but over-salted chips, the roasted garlic queso, and cochinita pibil (you also get your choice of the seven fillings - in this case toppings). There were plenty of chips and the cheese sauce, although again nontraditional, was warm, creamy, and delicious. There was also plenty of the too dry pork and another container of the red/green salsa. When I added the pico de gallo and salsa to the nachos, they were quite good although they were not bad without them. The crema was unnecessary in my opinion, detracting from the yummy cheese sauce and adding additional fat while contributing little to the flavor. 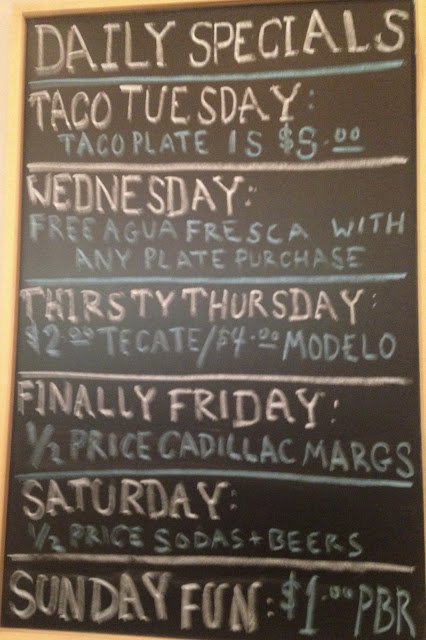 They have specials every day and a decent, varied selection of reasonably priced drinks. The taco plate would be more appropriately priced at $5.50 to $6 and "Taco Tuesday" brings the plate in at a much more reasonable $5. Another bargain is "Finally Friday" with Cadillac margaritas being half-price (on Fridays of course) although I am not positive about either the size of or ingredients in them, so I cannot comment on their full-price or half-price value. You get free "fresh water" on Wednesdays if that is any kind of deal or enticement. The only addition to the drink menu that could contribute to a better, more authentic experience would be horchata, a traditional sweet Mexican drink made from rice and with vanilla, cinnamon and sugar added. A digestivo such as RumChata, a liquor made with cream-based horchata and rum, would be another good after dinner option. 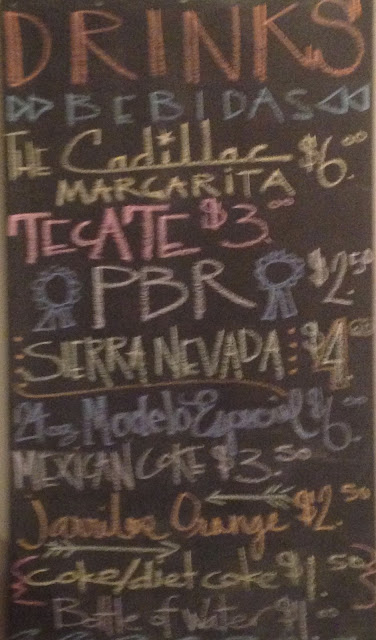 My recommendations for a better value and experience are:

I was quite pleased with our meal overall and service was excellent, but there are too many concerns for me to give them 9 or 10 Bombs (5 Stars on Yelp, TripAdvisor, Zomato, and Tabelog). Therefore, ...