Lawrence, Kansas: Order Mistakes Are Par For The Course At This Papa John's

After reading the reviews for this Papa John's, I should have anticipated problems. No wonder they are averaging less than 2.5 stars out of 5 on yelp.

I ordered the two large one-topping pizza special ($15.95) online for pick-up at 5:30pm sharp, one with extra cheese and one with extra cheese and NO SAUCE. My wife is allergic to tomatoes, so in the "comments" section for that particular pizza, I told them "no tomatoes, olive oil ok, tomato allergy". I added no comments when completing selection of ingredients for the other pizza, only choosing "extra cheese" for the whole pie. I left the "instructions" section for the entire order (last step) blank as well.

When I arrived promptly at 5:30, the person behind the counter, obviously the manager or owner, read my order back to me after asking my name: "two large pizzas, extra cheese, no sauce" he said. "No", I said, "my order was only for one pizza with no sauce, I was very specific when I ordered, the other pizza was a normal pizza with sauce and extra cheese". 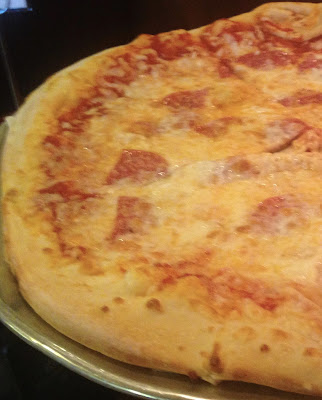 Instead of saying "I'm sorry for our mistake", I was told that it would be another seven minutes to fix the order and prepare a pizza as I had ordered and that I should have a seat. The reason I ordered ahead online for pick-up at a specific time was to avoid waiting, but because of their mistake, I was forced to wait. It took longer than seven minutes as I suspected (the pizza may take seven minutes to bake, but it was another 3-5 minutes before an employee was able to actually assemble the pizza and put it in the oven), closer to 10-12 minutes.

The same guy who took the order brought the pizzas over to me, one with sauce and one without, just as I had originally ordered. Again, no "sorry you had to wait" or any other sign of remorse. As a former owner of a retail food business, I would have offered a customer in my position something to drink, possibly the extra "white" pizza that had mistakenly been made and they could not sell to someone else, or a even a free dessert, but none of that happened.

When I got the pizzas home, my pizza (with sauce) was relatively hot, but my wife's pizza (the one without sauce that had been sitting there 10-12 minutes while my pizza was being remade) was ice cold. I had to fire up the oven, wait 10 minutes for it to reach 375 degrees, then re-bake the pizza for 7-8 minutes until it reached proper temperature. In total, Papa John's mistake cost us an additional 30 minutes of wasted time. Unsat.

The pizzas were "OK", my wife's a bit dry after all the baking and mine with too much sauce. I cannot imagine paying $17, the going rate for a 14" (large) pizza off the menu, for a Papa John's pizza and the two pizzas we received were not much of a bargain at two for $17 and change (including tax). Unfortunately, pizza in Lawrence is either terrible or overpriced, so we do not have many choices when craving a pie and this Papa John's will not be one of those choices from now on.

Title: Order Mistakes Are Par For The Course At This Papa John's

Translation for Civilians: SNAFU = "Situation Normal, All Fucked Up"
Author: CombatCritic at 9:18:00 AM