Not good. How this place averages four stars with 170+ reviews on Yelp is beyond me. 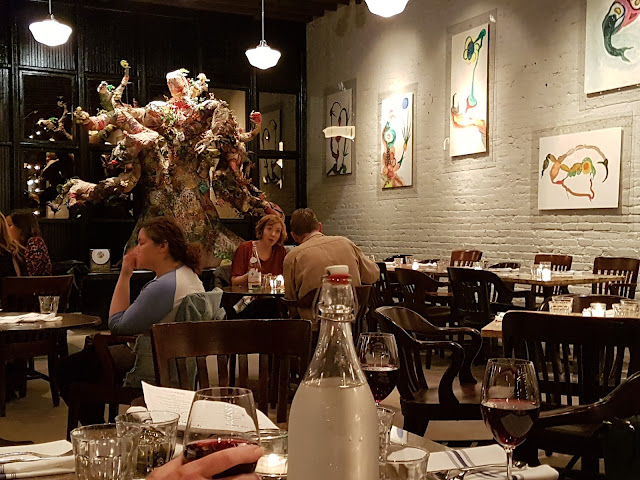 As I always say before a review of a French restaurant, "I love French food", but I did not even like Le Bouillon. 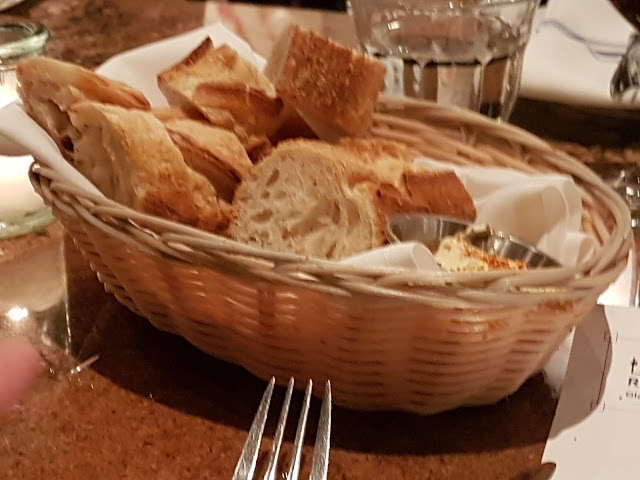 We came with a party of 12 from a conference at UNO as well as 2 last minute add-ons, but staff refused to add an extra table at first, making us squeeze into four small tables pushed together with just two small baskets of bread for 14 very cramped people. They told us that they were "fully booked", but less than half the tables were occupied all evening and a glass walled room with two giant tables sat empty next to the entrance. They finally got a clue and brought an extra table jusr before the first course arrived. 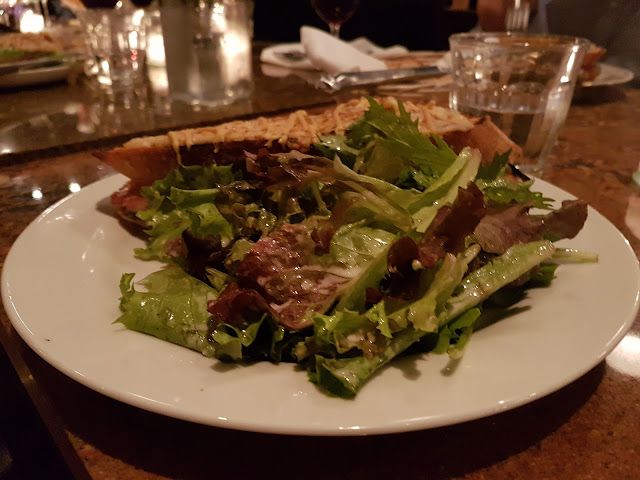 The server asked immediately what we wanted to drink, but there was just one, very extensive (at least 20 pages of small print - hundreds of options), wine/drink list for 14 people on the table. There were only a couple of wine options offered by the glass starting in the $9-$10 range and most bottles were well over $100 a pop with several approaching $1000. Feeling perplexed by the poor start, we stuck with water. 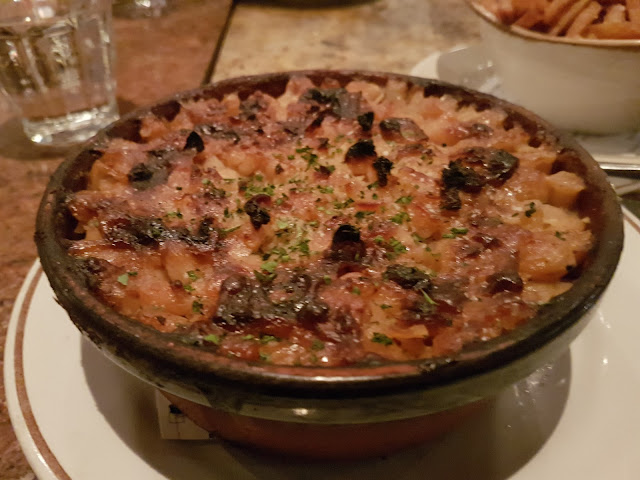 The server then dropped a rather heavy butter knife on my arm as she was setting the table for the first course. Things were spiraling downhill fast. They had no moules (mussels) or escargots (snails), focusing their menu on the Raw Bar instead (no thanks - I do not eat un/undercooked animal flesh), so we passed on appetizers. 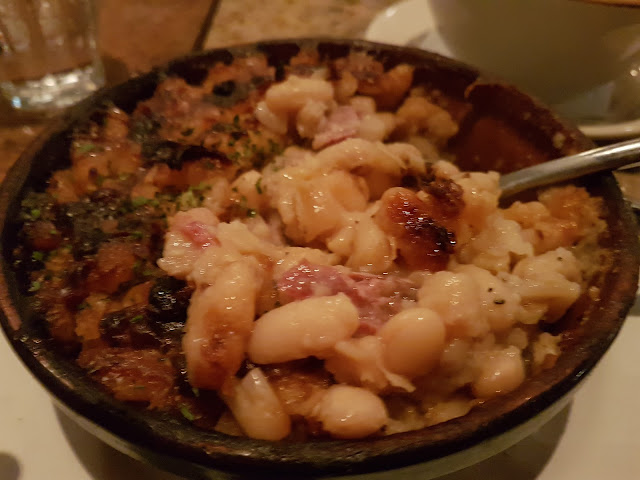 Beside a couple of $9-$13 soups and salads, everything had meat/fish (my wife prefers to eat vegetarian whenever possible), so the only options to her liking were the Le Bouillon Burger ($14) and the Croques Monsieur ($16). The only things that peaked my interest were the Wagyu Hangar Steak ($26) and the Cassoulet ($21), so she went with the croques monsieur and I the cassoulet. Hers came with a bit of salad and mine with nothing, so we both, unfortunately, ordered a side of Frites (fries) with Aioli ($6). 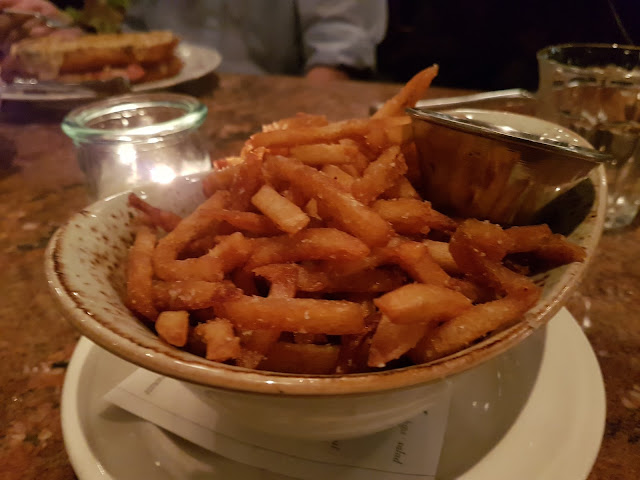 The croques monsieur had two huge, thick slices of egg battered toast, but barely a hint of ham and cheese. It was so salty that my wife could barely finish half. My cassoulet came out with the top burnt, so I mixed it up only to find mostly white beans and a couple of small pieces of ham and bacon. There were no noticeable "garlic sausage" or "duck" as advertized on the menu and it was also very salty, so I gave up after trying to eat half of my $21 white bean casserole. The fries looked very nice, but were very thin and crispy (almost burnt), hard to eat with fork or fingers, and EXTREMELY SALTY. All other attendees had similar complaints of salty food and fries. 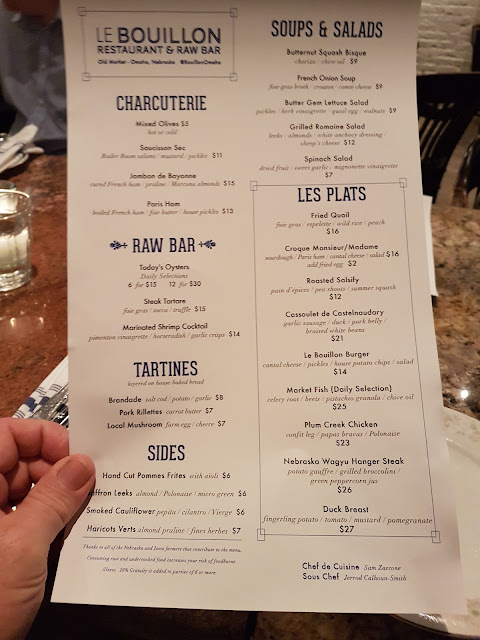 When they cleared the table, nobody wondered why so much food remained on all of our plates, so I mentioned to the server how salty the food was, especially the fries, so they removed them (just the fries) from the checks. At $42+ for water, half of a salty sandwich, and half a bowl of salty bean soup (minus the soup), this was one of the poorest values in recent memory.

CombatCritic Gives Le Bouillon 1 Bomb Out Of 10 And A Spot On My WALL OF SHAME ... BOOAH LE BOUILLON!

Translation for Civilians: FUBAR = "Fucked Up Beyond All Repair"

"CombatCritic", "TravelValue" and "BOOAH" Are Protected Under U.S. Copyright Laws And Are Exclusive Property Of 3rd Wave Media Group, LLC and CombatCritic