As a lifetime Los Angeles Dodger fan, I have not had many opportunities to watch my "Boys in Blue" in the postseason since 1988, that's 37 years! We gave up cable, as many Americans are, because of the illegal monopolization of television as well as the ridiculous contracts and exorbitant fees charged by Time Warner Cable, AT&T, and others.

I can watch most any show on television using an antenna and pointing it toward our local affiliates broadcasting antennas. Sure, we have to watch commercials, but we have saved nearly $1200 since dropping cable. I can also watch the Kansas City Chiefs football team, live, a mere 50 miles away at Arrowhead Stadium, over "the air" for free. However, if I want to watch Major League Baseball (MLB), I have to get cable, even to purchase and stream online at MLB.com. MLB is obviously in bed with the cable companies and could care less about Americans, baseball fans, excluding those of us without cable from watching the postseason.

I have been trying for weeks to find out from MLB how I can subscribe to MLB-Postseason online after having watched the regular season online on my computer, but I was repeatedly told "we don't know if or when PostseasonTV will be available, just check our website from time to time". Really? MLB does not know if they are going to broadcast the postseason online just a few days before the end of the season? How can that be possible other than through complete incompetence or total apathy toward fans?

Finally, on October 5th, 2015, the day before the Wild Card games were set to begin, a link to PostseasonTV magically appeared on MLB.com ... HOORAY! But I celebrated too soon. You have to live outside the US/Canada or subscribe to cable (through one of MLB's limited number of providers) to watch the postseason on MLB.com. You can apparently get part of the feed, not the actual broadcast, for National League games, but not the American League series or the World Series.

I then saw a link to their forum, so I posted the following: 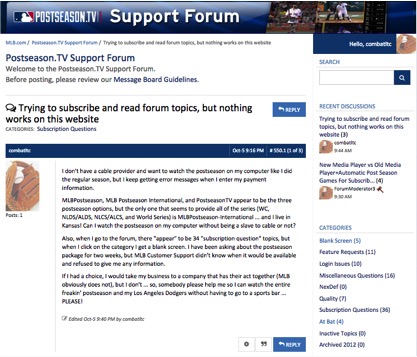 MLB's answer was as useless as the ridiculously unsubstantial responses provided by their "customer service", and I use that term loosely, reps gave me before season's end. Here is the MLB moderator's response and my follow-up reply: 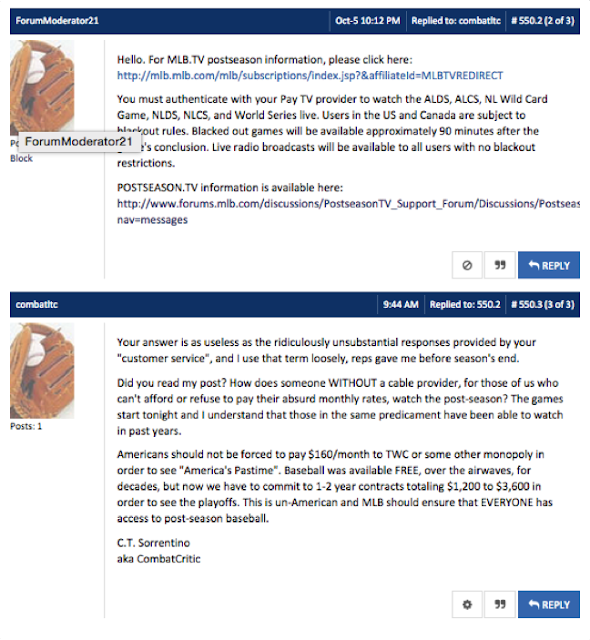 Americans should not be forced to pay to see "America's Pastime". Baseball was available FREE for decades, but now we cannot watch our favorite teams in the playoffs without giving-in to cable's thievery. This is un-American and MLB should ensure that EVERYONE has access to post-season baseball.

I implore Commissioner of Baseball, Robert D. Manfred Jr., to fix this problem ASAP and GIVE ALL AMERICANS UNRESTRICTED ACCESS TO AMERICA'S PASTIME!

CombatCritic Gives MLB.com and Postseason.TV 1 out of 10 Bombs ... More Bombs Are Better!