Lawrence, KS: This Ladybird Kinda "Bugged" Me, But Was Overall "OK"

"Ladybird", by the way, is the British term for what we know as a "ladybug", the cute little red dome shaped things, and member of the beetle family, with black dots that will crawl up your finger and onto your hand, tagging along until they get bored and fly away to find another unsuspecting human being or facsimile thereof. 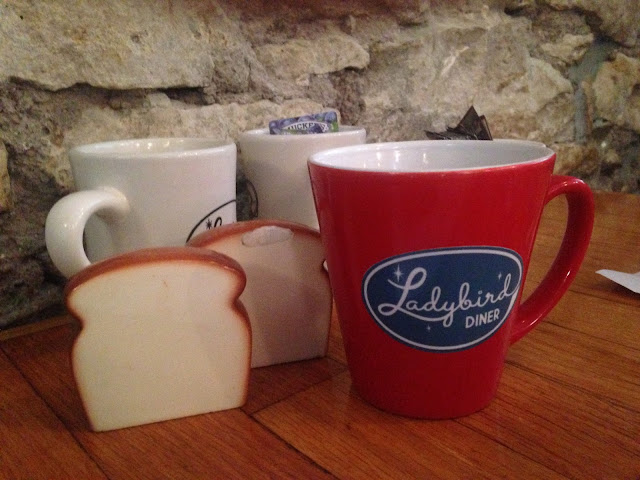 Anyway, Ladybird Diner is a busy place and got great reviews from respected colleagues, but was underwhelming in my eyes. I somehow expected more and have yet to find a great breakfast place (or lunch and dinner for that matter) in LFK. Big sigh. We stopped by about a month ago on a Sunday around 1pm and they were packed with a 15-20 minute wait, so we went up the street and ate. 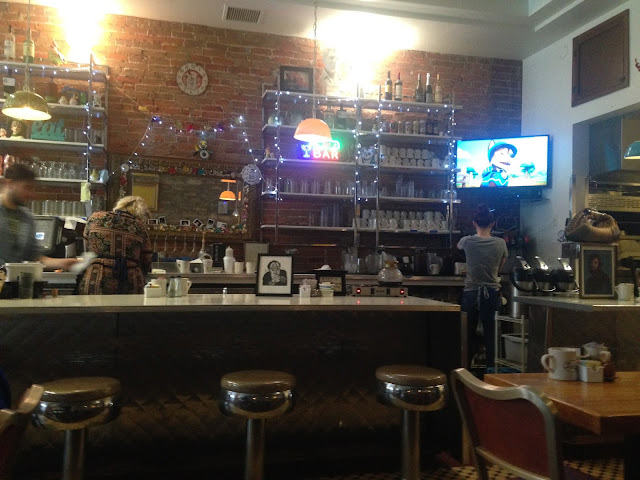 My spouse had a medical procedure and had not eaten for 33 hours, and I fasted along with her for moral support. So by the time we arrived at 9:30 this morning, we were FAMISHED, STARVING, HUNGRY AS A HORSE if you catch my drift. 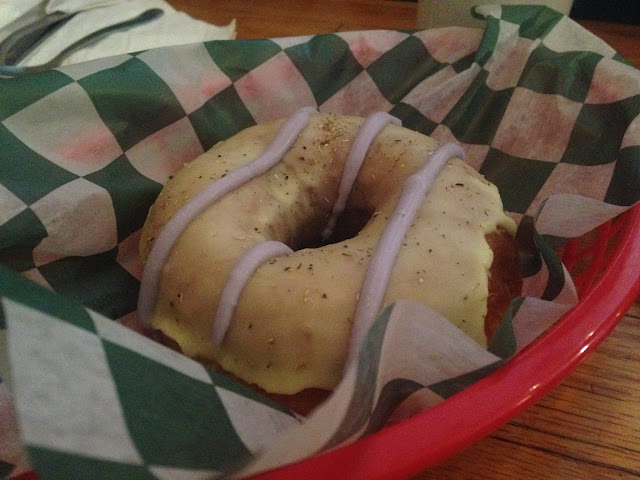 My wife loves their pancakes and hashbrowns, but went for a couple of doughnuts (and one to take home for tomorrow - $2.09/ea) and a side of hashbrowns ($2.49). She was happy as a lark, indulging her sweet tooth and getting a massive sugar and carb rush all for just $6.67. Such a deal! 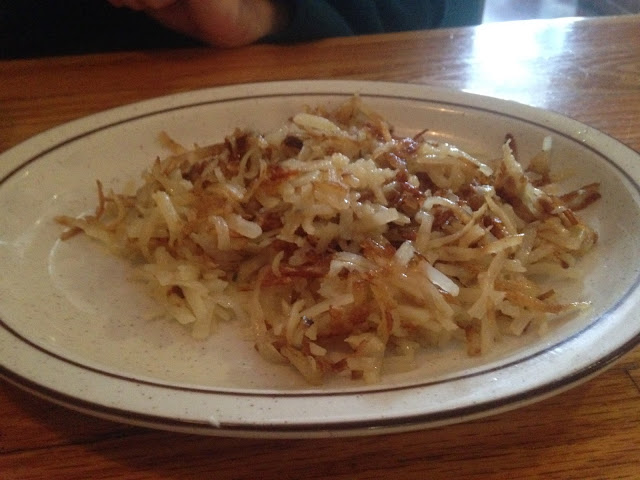 I, on the other hand, went the more traditional route. I rarely eat a big breakfast, opting instead for a cup or two of joe and some wheat bread with natural peanut butter and sliced bananas. However, 4-6 times a year a get a hankerin' for a full-on breakfast with eggs, bacon, hashbrowns, and biscuits and gravy (B&G), so that was what I did. I ordered the Diner Breakfast ($9.99) and a half order of B&G ($5.49). The Diner was decent, nothing special, coming with wheat toast, and the eggs were cooked over-medium as I had asked. The three slices of bacon were lukewarm and petrified, obviously pre-cooked and sitting in a warming tray or nuked because they were difficult to cut with a knife and very chewy if you know what I mean. The hashbrowns were somewhat sparse, but crispy and savory just the way I like them. 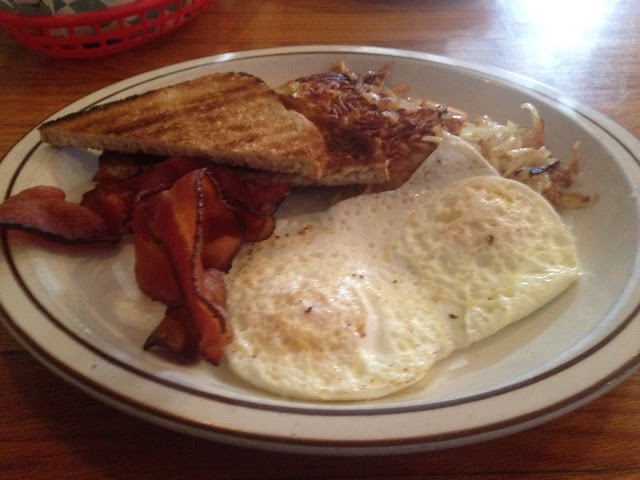 The biscuits and gravy were another story altogether. A buttermilk biscuit and a ladle of country gravy cost no more than a $1 max to produce, so I have difficulty understanding a 549% markup. Ladybird is not the only culprit, all the breakfast places on Mass Street do it as do many others around the nation. $2.99, even $3.49, would be a fair price for a single biscuit and gravy for a $2 to $2.50 profit on less than a buck's worth of flour and fat. Enough about price. 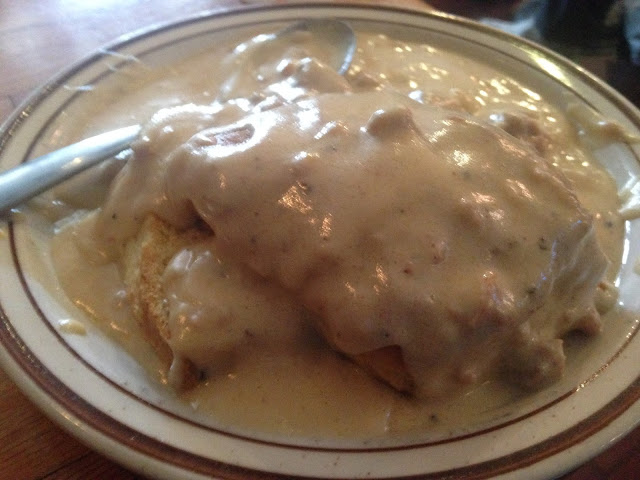 The order of B&G looked appetizing enough, but there was an odd taste to the gravy I could not quite put my finger on. Did they add honey mustard to the gravy? It sure tasted like it, so I asked to cook as I came back from the loo and was told that it was not honey mustard, but nutmeg. I was wrong, but the taste of the gravy was even wronger (look that up in your Funk and Wagnalls). Why can't I get some good ol' fashioned overpriced biscuits and gravy on Mass Street? This place adds nutmeg, another tops it with watery green chili sauce ... give me a damn biscuit and some freakin' normal salty and peppery country gravy for cryin' out loud! 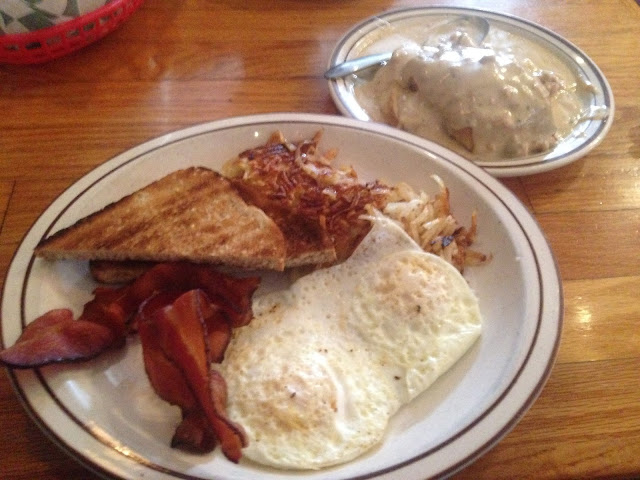 Sorry, the country gravy has me talkin' like a country boy, so let me digress y'all. The service was "OK", not bad, but not very good. Maybe they were shorthanded because I only saw two servers running around to the 15 or so tables, but I sat and waited for a coffee refill for a good 10 minutes while our server ran back and forth avoiding eye contact the entire time. I know servers somehow expect that they deserve a 20% tip nowadays (there I go again, dammit!) no matter how well they perform, but I put myself through college waiting tables and am a bit picky when it comes to service. This young lady got a 15% tip, generous in my eyes, but I am sure she cursed me as we walked out the door. 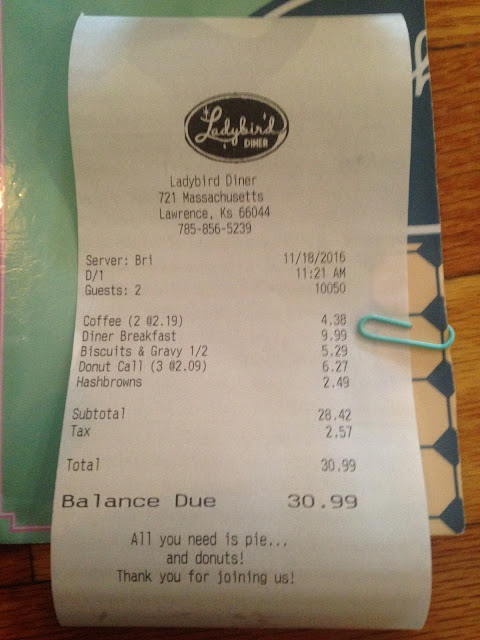 Sidenote: I rarely give less than 15% because I know these folks work mostly for tips to pay their bills and routinely give 20%+ for very good, friendly service. This service was neither, but not bad enough to warrant 10% or less as sometimes has to be the case. If I do tip less than 15%, I normally inform them of their shortfalls or leave a note if they are very busy in order to, hopefully make it a learning experience. In this case, I left my card and she can read the review (or not). If she does read this review, I hope she smiles more in the future, makes eye contact and ensures coffee mugs are full, and maybe makes a little idle chit chat so customers feel like we are appreciated, human, sentient beings.

CombatCritic Gives Ladybird Diner 6 Bombs Out Of 10 With Deductions For Exotic and Overpriced B&G, Cold and Chewy Bacon, And So-So Service... More Bombs Are Better! 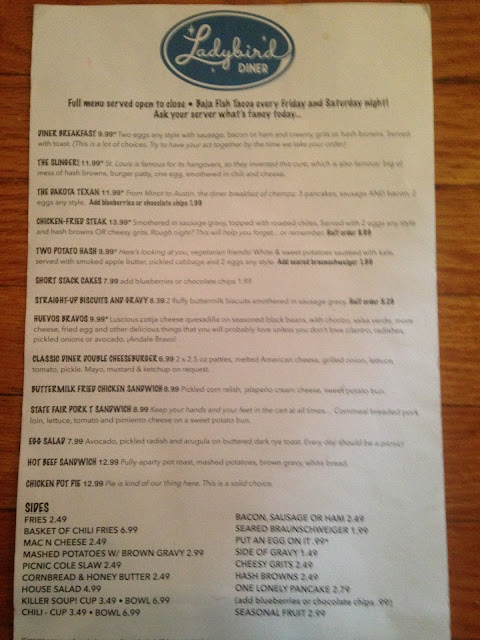 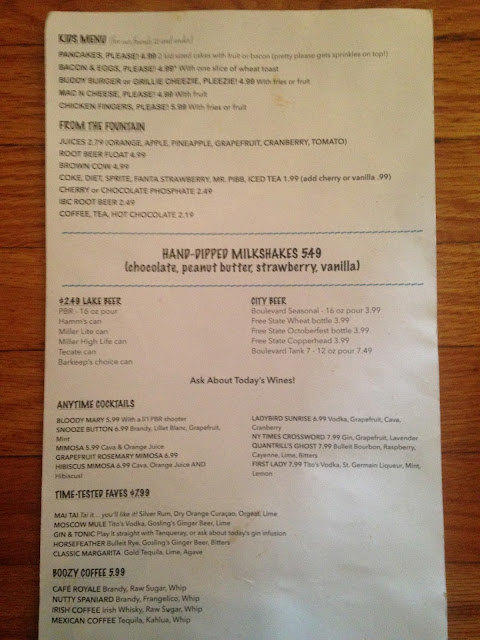 Title: Lawrence, KS: This Ladybird Kinda "Bugged" Me, But Was Overall "OK"