It was a cold winter's night with nary an open restaurant to be found on Befana Eve in snowy Matera (January 6th, Befana, is the morning where kids in Italy awake to presents brought by the legendary witch). We stumbled upon Osteria Malatesta (Malatesta is an old Italian (Rimini) family name and literally means "bad head" or "crazy") while walking down a back street toward the Sassi di Matera (old town - UNESCO site) where there seemed to be more action and open shops. 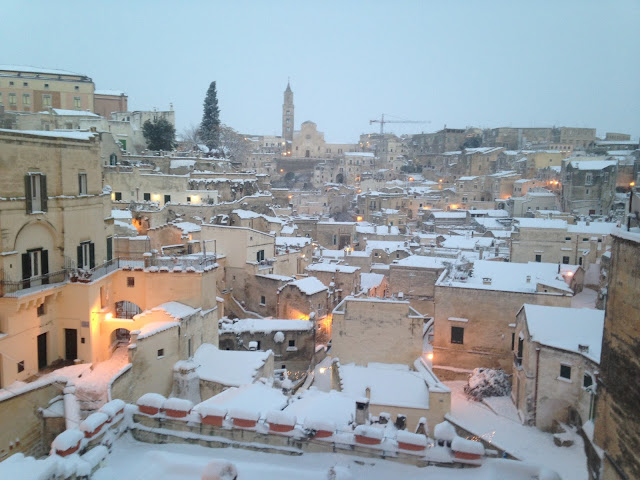 The place was full except for an open table and the two servers were running around taking orders and delivering food when we arrived. We were just happy to be in a warm room and out of the uncharacteristically bitter cold in Southern Italy. The server told us that the table was reserved, but there were seats available at the "tavola degli amici" (table of the friends), a table for eight where a young couple from Puglia was already sitting, one a forest ranger and his wife a Carabinieri (state police). They invited us to join them, not like they had a choice, and were quite welcoming and friendly.

For our antipasto, we decided to share the formaggi (cheese), olive (green olives), e salame (and salami) accompanied by fresh bread. For €8, the plate was a bit sparse with three small triangles of local cheese, about 9-10 green olives, and four slices of salami. I think €4 to €5 would have been a more reasonable price. A litre of local red house (della casa) wine was much more reasonably priced at €4.50 and was quite good.

For our entrees, we decided to go light and order only pasta (no meat course). My wife went with the local cavatelli in a pesto, gorgonzola, and almond sauce (€8). The portion was of decent size and the sauce rich and flavorful. THe combination of pesto and gorgonzola was unique, but they pulled it off quite well. 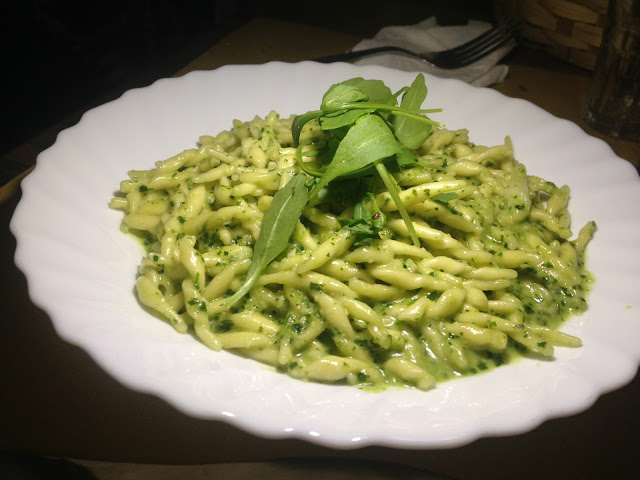 I wanted to try a local dish and the server recommended the Orecchiette Cruschi e Mollica Fritta (€8). Cruschi are sun dried sweet Italian peppers with the seeds removed, cut or crushed into tiny pieces, then pan fried in olive oil until crispy. The olive oil and peppers are then added to the cooked cavatelli, sprinkled with fried breadcrumbs. It was quite different than any pasta dish I have had and tasty enough, but there are many more sauces I prefer to this one. 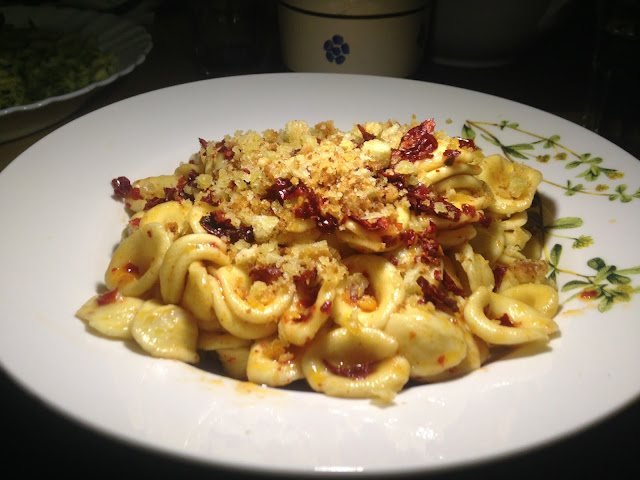 The tavern was old with large arched stone ceiling, a bit plain but inviting nonetheless. The tables and chairs were old and wooden with candles burning on all except ours. The service was efficient, but as cold as the air outside, barely talking to us until we left and I told them that I was a food critic. They became all smiles then and treated us like old friends ... too late.