Matera, Italy: Is It Italian? Is It American? It's Pub "14th" And Yummy Burgers!


It was a cold night, snow falling and wind howling when we found ourselves in an alley across from San Francesco di Paola church in Matera's town center not far from their famous Sassi and UNESCO World Heritage Site. It was the most snow (2+ feet) Matera had since 1956, 60 years ago and most restaurants in town were closed for the holiday (Befana) weekend. To find 14th, enter the alley and follow the signs toward Pizzeria Da Mario, but instead of turning right, turn left and 14th will be the last place on the right ... burgers, sandwiches, cheap beer, friendly service and more. You will not find it otherwise.

A large cavernous place, they have wooden booths, tables and chairs downstairs near the bar and more tables up in the loft that has been erected in the center of the room. They serve mostly hamburgers and sandwiches and a decent selection of tap and bottled beers as well as wine and spirits. 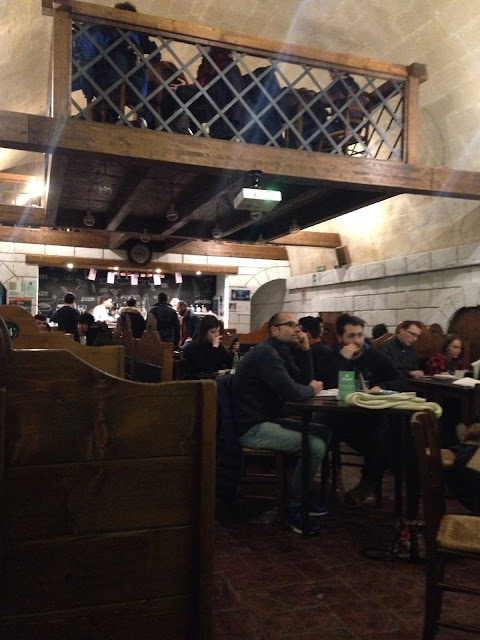 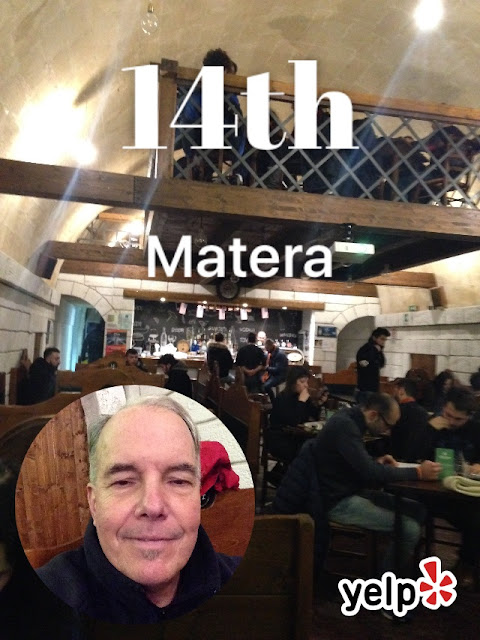 I ordered a 1/2 litre Edinger Hefeweizen (€5) and a Classic Burger (€8) with a thick 1/3 pound beef patty, cheese, caramelized onion, bacon, lettuce. tomato and BBQ sauce (I sub'ed mayo for the BBQ sauce) on a big homemade sesame seed bun and accompanied by handcut fries. The beer was cold with a frothy head and the burger, amazingly enough, excellent even though the bacon was more like ham due to the fact that American-style bacon is relatively unknown and unavailable in Italy. 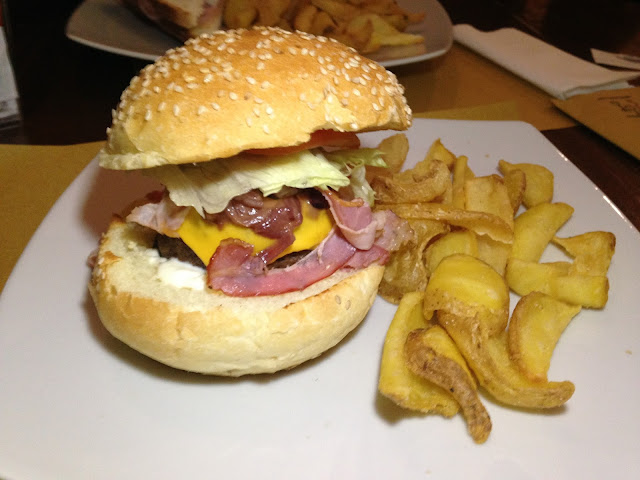 My wife had a ham, cheese, and mushroom "Club" panino (€7 - "panini", commonly used as singular in the US, is actually plural in Italy, meaning two or more), also accompanied by fries. The sandwich was massive with three thin slices of white toast layered with mushrooms and cheese on one and ham and cheese on the other, then toasted in a sandwich press. The sandwich and fries were good, but both could have been warmer. probably having sat waiting for the two busy servers that were obviously not expecting such a large crowd on a Sunday night after a holiday. 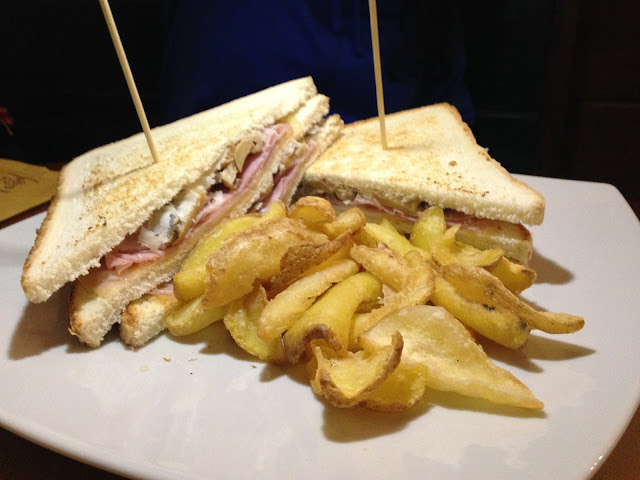 The servers were friendly, but, overwhelmed by the unexpectedly large crowd, service was rather slow. We waited over 30 minutes for our orders while the couple that entered just before us (and told us about the existence of the pub) received their food less than 10 minutes after ordering.

CombatCritic Gives 14th 7 Bombs Out Of 10 With Deductions For Slow Service Untraditional Bacon, And A Lukewarm Sandwich ... More Bombs Are Better!

Title: Matera, Italy: Is It Italian? Is It American? It's Pub "14th" And Yummy Burgers!