Salerno, Italy: "The Duke" Of Italian Cuisine And Value In Beautiful Salerno


I was very impressed by Salerno and its Mercatini di Natale and that is not an easy thing to do, but I may have been even more impressed by our dinner at Il Duca ("The Duke"). 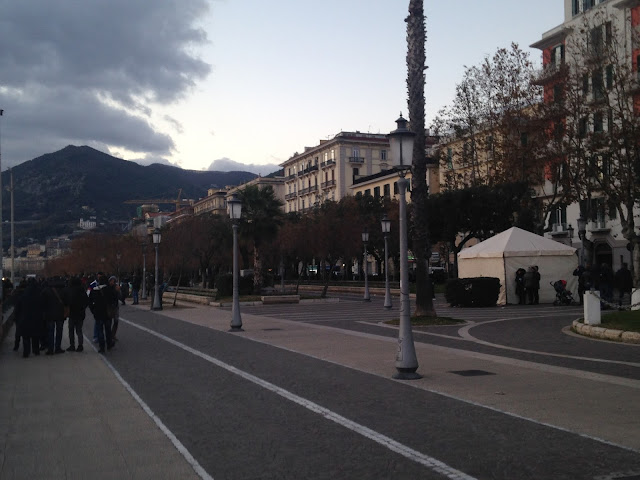 I lived a 40-minute drive from Salerno for three years and have through it on many occasion, but I recently visited the city for the first time. We took the train from Napoli Centrale to meet one of my wife's friends and visit Salerno's renowned Mercatini di Natale (Christmas Market) ... and, boy, am I glad we did! 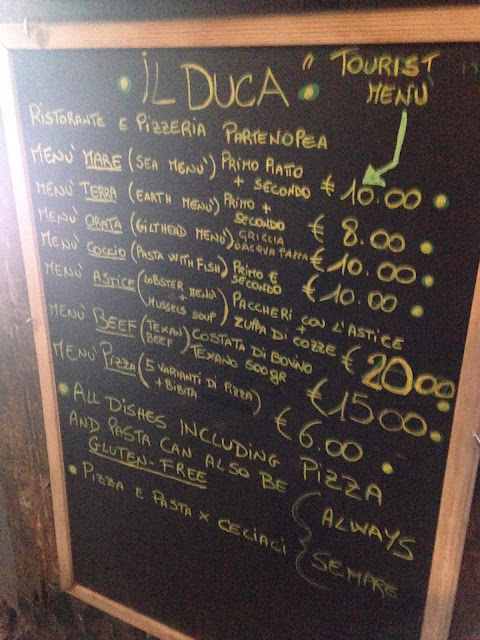 Salerno is a city of 130,000 people on the sea with fabulous views of the Amalfi Coast. The lungomare, a path along the sea next to the main road in town, is gorgeous and the buildings lining the street opposite the sea old and majestic. During the holidays , lungomare is the residence of numerous vendors displaying their wares, including ceramics, local delicacies and liqueurs, sweets of every variety, puppet shows, clothing, candles, and many other enticing things ... aka Mercatini Di Salerno. 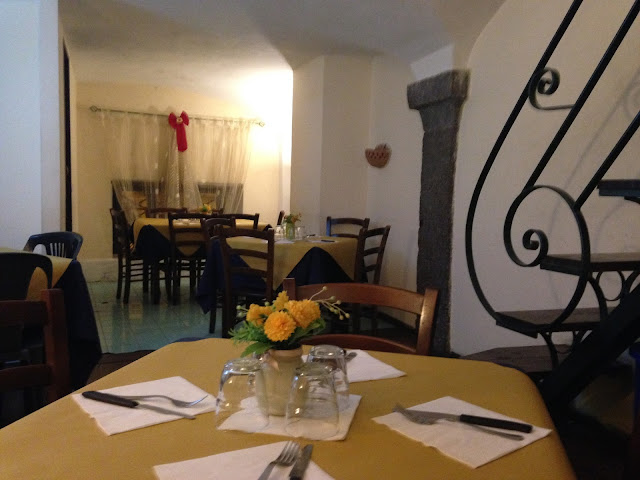 Across the main street lining the lungomare is the oldest part of town (centro storico) with its narrow, winding streets, alleys, and piazzas lined with marvelous centuries old buildings on all sides. We stopped for dinner at Il Duca, a small restaurant and pizzeria that had an enticing tourist menu posted outside, enjoying a delightful and inexpensive dinner of pizzas, pasta, meat, bread and local wine. 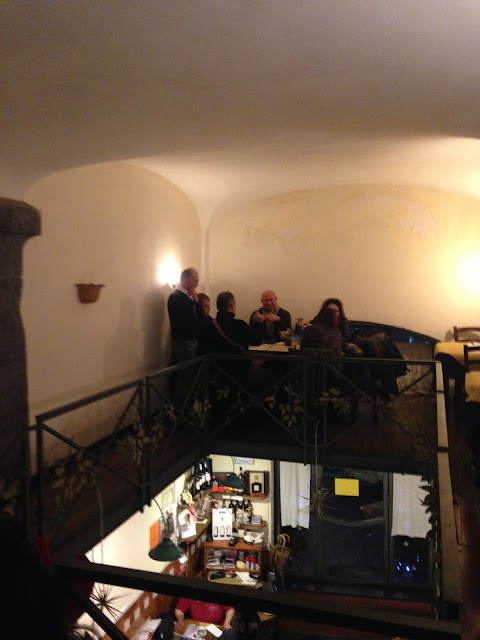 The restaurant was cute and inviting from the outside, being in a historic building with small tables with tablecloths and a pizza oven blazing in the back. We had a good feeling about the place when seeing the menu posted outside: €8 for pasta (primo), a meat dish (secondo), fries or salad (contorno), and mineral water and just €6 for pizza and a drink? That is unheard of these days in Italy, so we had to inquire and entered. 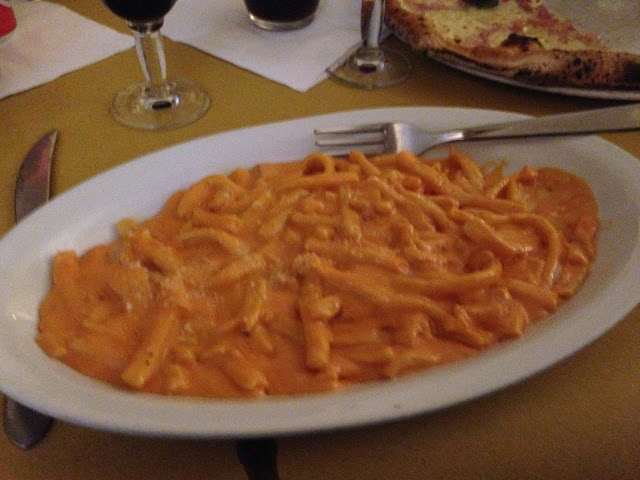 They had five choices of pizza, including Margherita, Salame, and a couple others, normally at a price of at least €6 to €7 without a drink anywhere else. When I asked, I found that the Menu Turistica di Terra (tourist menu without fish - meat instead - €8) consisted of a local pasta in a cheese and tomato sauce with bacon ... sounded good to me ... and the meat dish had steak, cream, rucola and parmigiano ... SOLD! 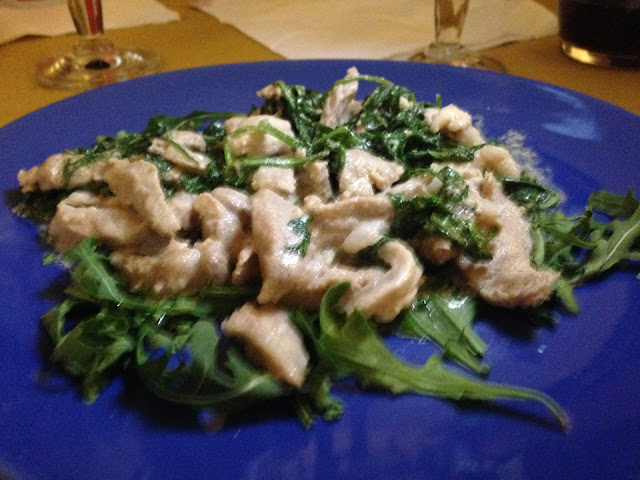 We ordered a litre of local red wine (€8) for the three of us, a bottle of mineral water (€2), two pizzas off the tourist menu, one Margherita and one with ham (no tomato sauce) for my tomato-hating wife, and the Menu Turistica di Terra for me. 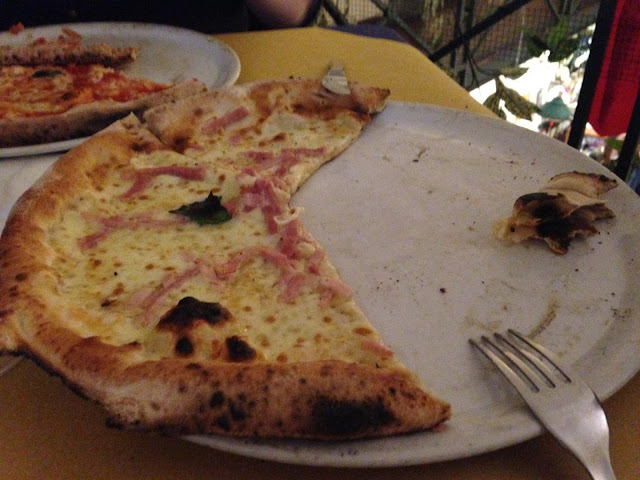 The wine was good, as is the case most everywhere in Italy, being a deep red, slightly chilled and robust. The pizzas quickly followed. Normally, I would not be happy with entrees arriving so far apart, but I know from experience that Neapolitan-style pizza takes less than two minutes to make - 30 seconds to manufacture and 90 seconds to bake. So when the pizzas quickly arrived, I had to wait at least 10 more minutes for my first course. I will just say that I was not disappointed by the wait. 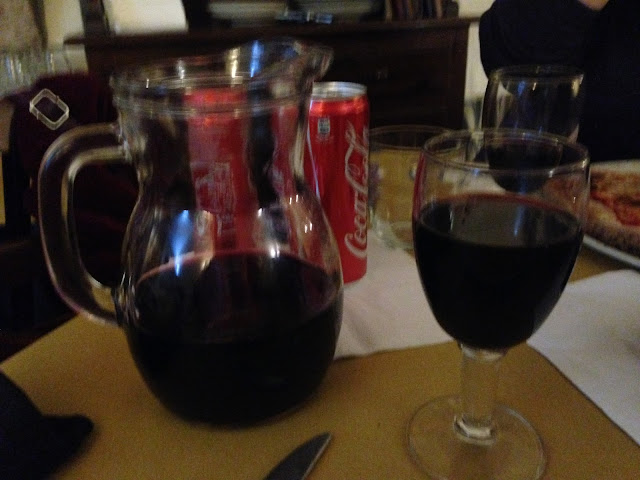 The oval dish was packed with a local pasta, reminding me of cicatielli, a pasta made in the region of my grandparents near Ariano, Irpino, about 60 miles inland. The sauce was to die for ... a yellow cheese sauce made with bacon, tasted like the creamiest, most decadent macaroni and cheese I have ever had ... it was scrump-diddly-umptious. If that were not enough, the meat dish shortly followed, a decent sized portion of sliced beef in a creamy sauce infused with fresh ruccola that was absolutely delicious. 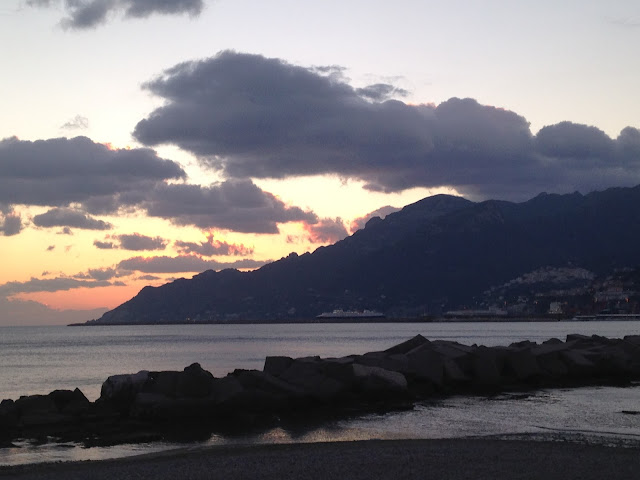 Unfortunately, it was time to catch our train back to Naples, so we left, continuing toward the station on streets filled with Christmas lights and throngs of people shopping or out for a Friday night stroll in the chilly late December air. The buildings became newer and newer as we walked southbound along Corso Vittorio Emanuele toward the station, but the charm of the town remained even as we reentered the 21st Century.

We will be back to Salerno and even contemplated making a home there, either permanently or temporarily, as we ease into retirement. At the very least, I will ritorno a salerno (return to Salerno) with my wife in the not too distant future to enjoy this lovely, historic seaside town as well as Il Duca. 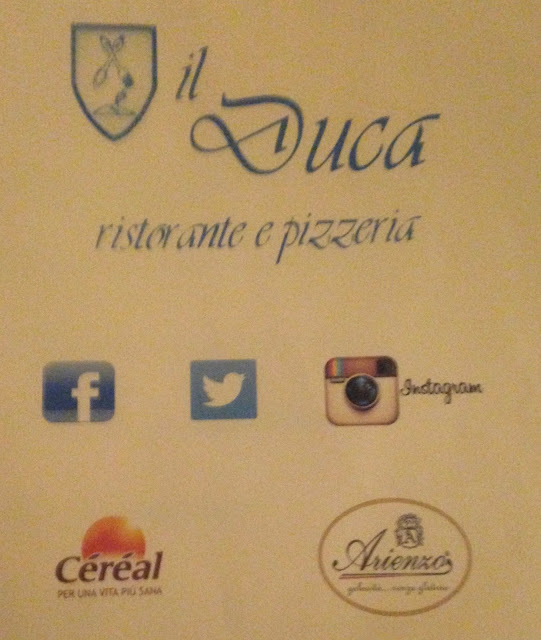 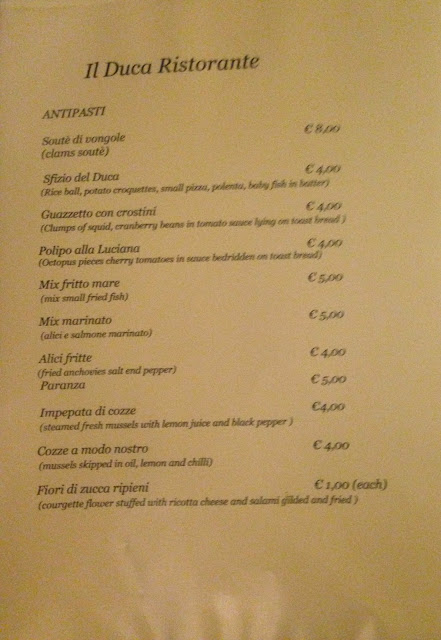 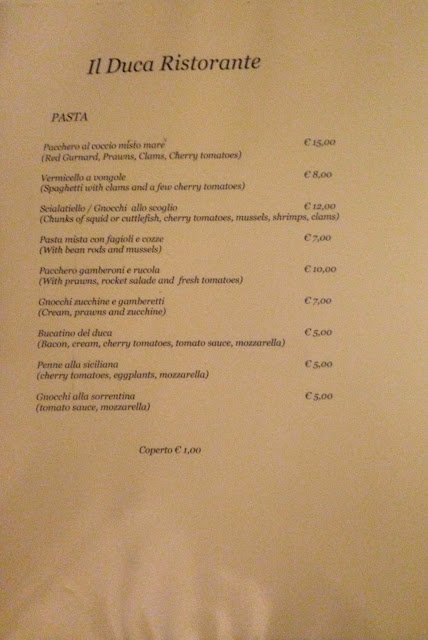 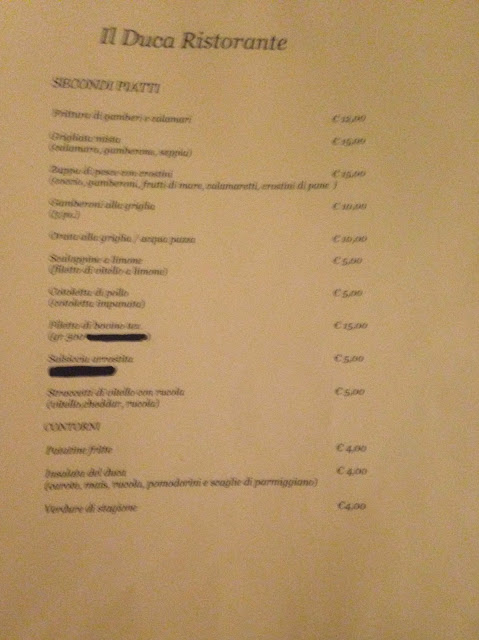 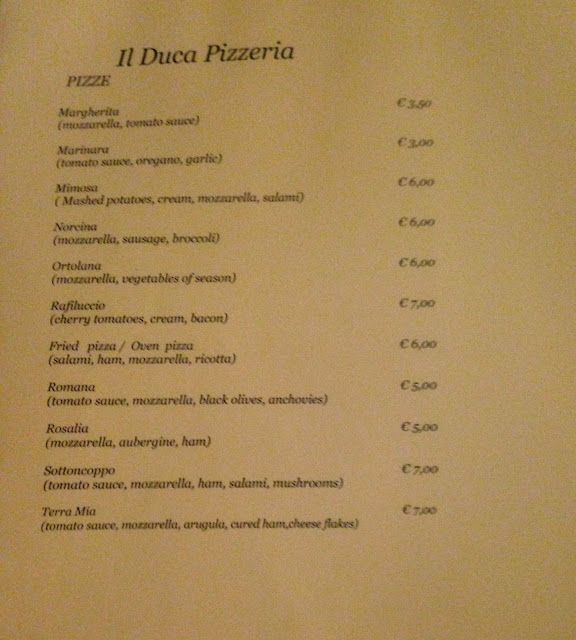 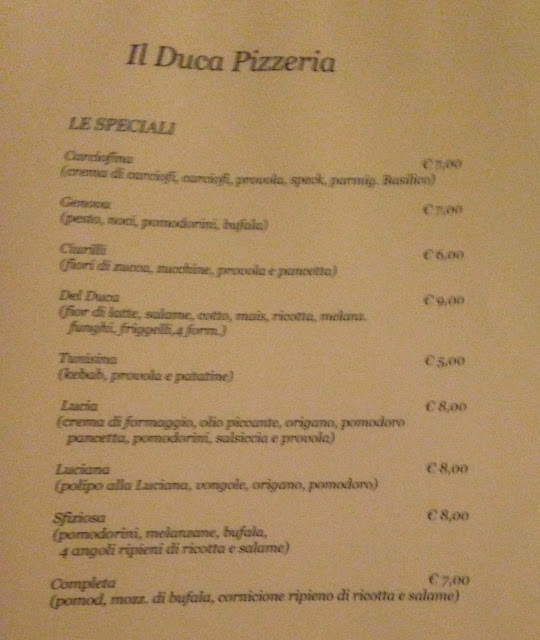 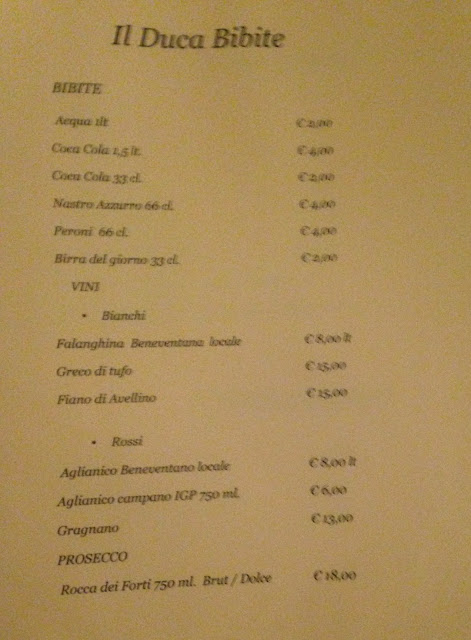 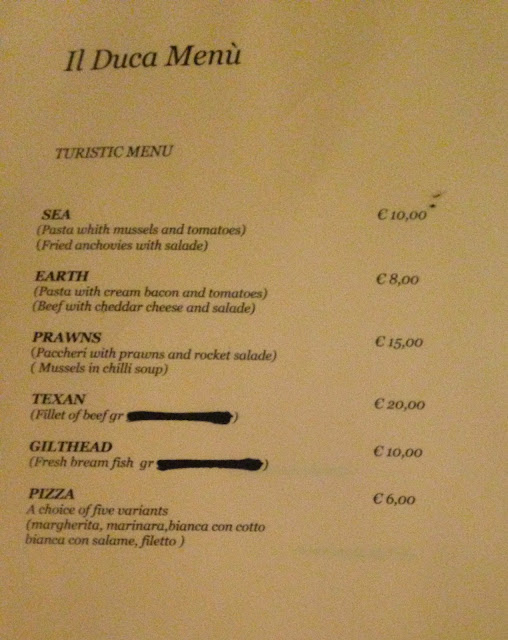 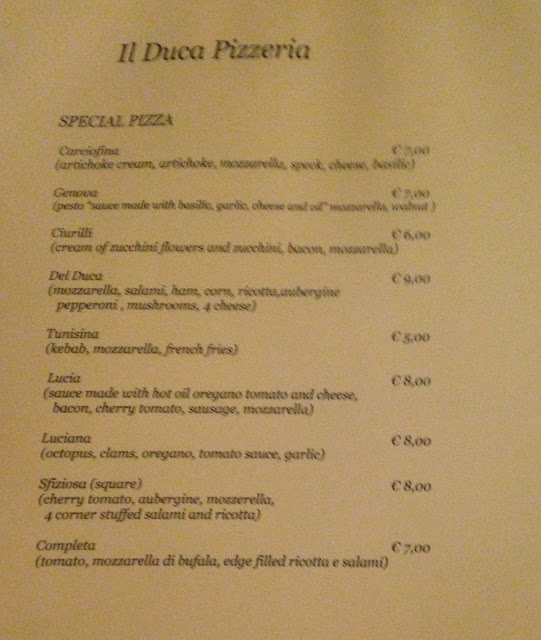 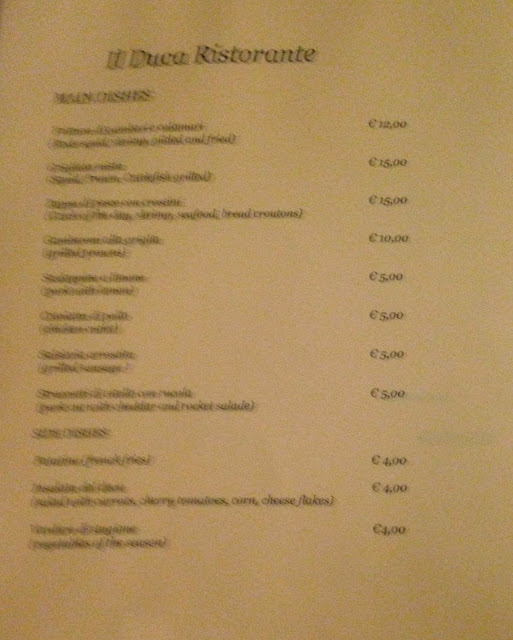 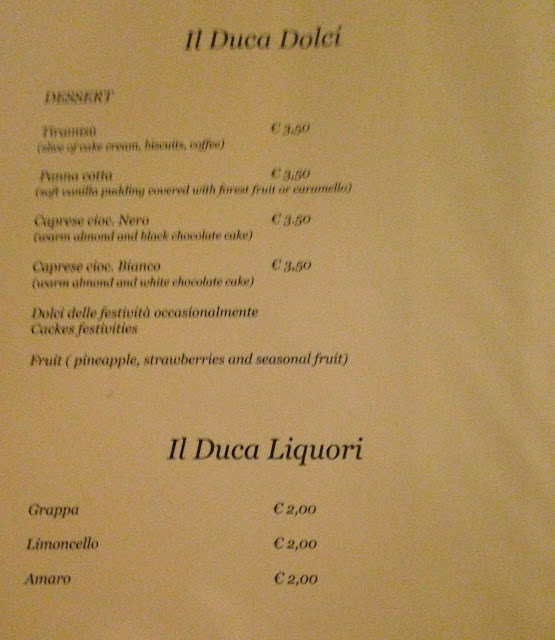 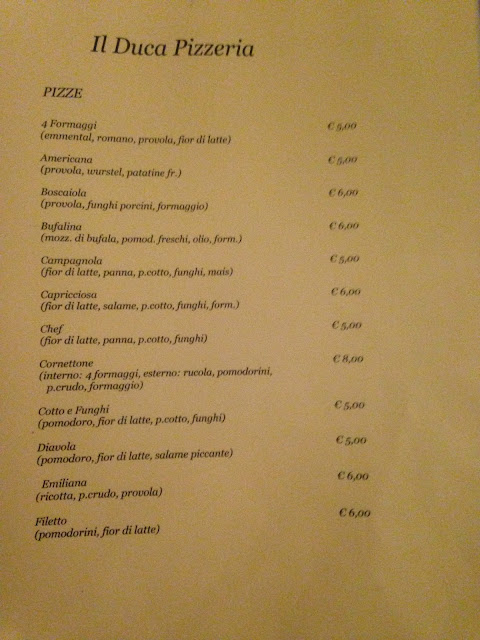 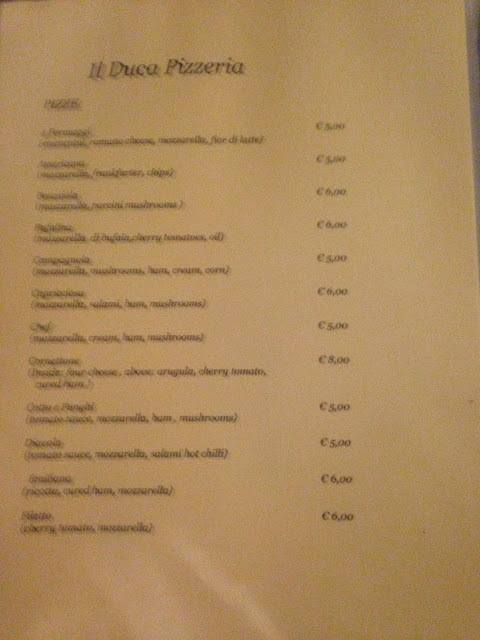 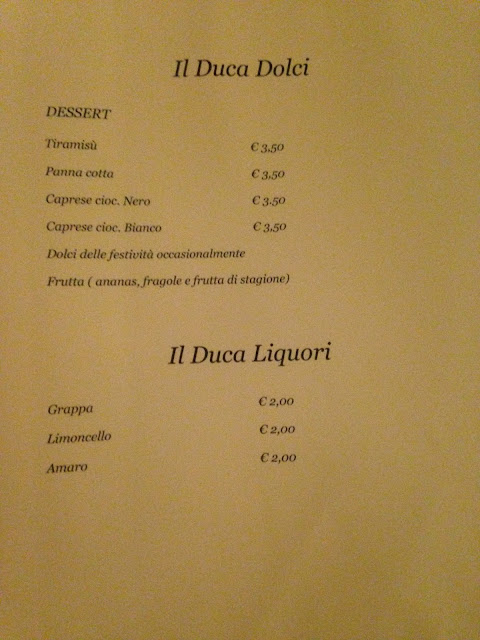 Title: Salerno, Italy: "The Duke" Of Italian Cuisine And Value In Beautiful Salerno