Ho-Hum. When I saw just 3.5 stars, I had some concerns. But with nary a decent, home-style Italian restaurant in a town infamous for its culinary delights, I decided to give Caro Amico a shot.

Having lived and traveled extensively in Italy and being married to an Italian, I am used to great, authentic Italian food and Neapolitan pizza at extremely reasonable prices. This has not been the case in Portland in the year we have lived here. With pasta dishes at $20+, individual "Neapolitan" pizzas, and I use that term loosely, in the same price range, and veal entrees (no soup/salad, bread, or both) at $25 and up (when you can find veal), I have found Italian food in Portland and surrounds expensive and subpar. Caro Amico was no exception.

We were herded into the dark bar at 5:20PM even though there were several tables in the restaurant available. The bartender seemed a bit grouchy, not understanding my wife's inquiry about sauce options for her pizza (she's allergic to tomatoes) and stating "whatever" rather than taking the time to understand or explain. 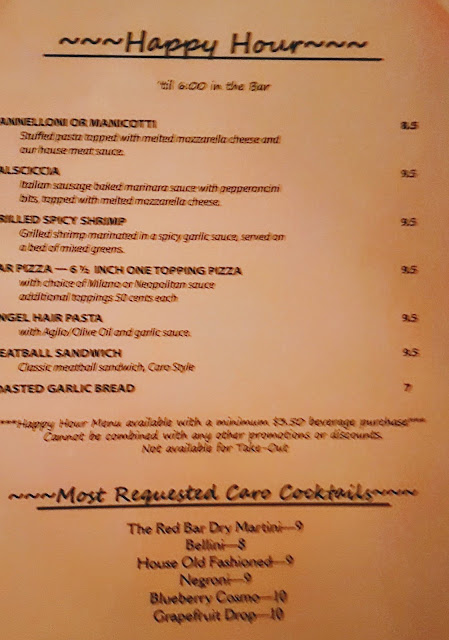 Their "Happy Hour" menu is a joke, with drink prices basically the same as regular prices as far as I could tell and half orders of menu dishes at half-price. Where is the value in that? Being our first visit, we decided to order of the regular menu. 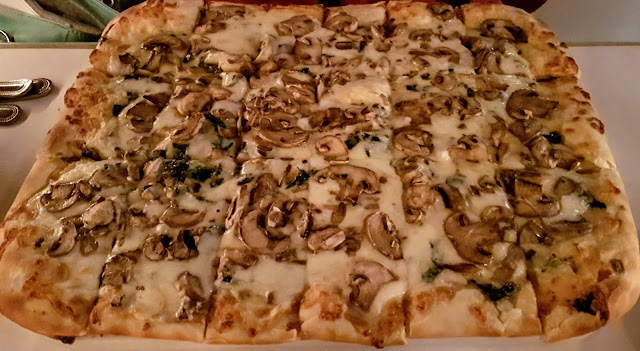 Instead of getting an 6.5 inch "small" one-topping pizza/snack for $11.50, my wife ordered a large pizza "Milano Style", which turned out to be "olive oil and sweet basil" (aka "pesto"), with mushrooms ($18.50) so we could take home the leftovers, a much better value. Having lived in Naples, Italy most of her life, she is a bit of a pizza snob, claiming that the size was "OK" and the sauce, cheese and mushrooms somewhat flavorful, but the crust rather chewy and "blah". 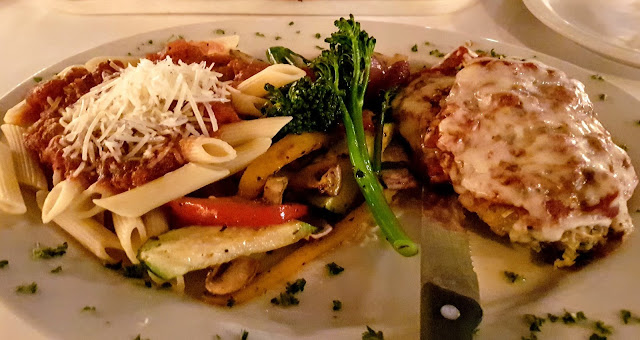 I went with my "American" favorite, Veal Parmigiana (which you would never find in Italy - there is no such thing as meat with tomato sauce and cheese on top), my go-to dish and a telltale sign of a restaurant's quality and value. At $24.75, the "veal" was not bad, but a bit too thick (could have been pounded more) and a little tough. The sauteed veggies were rather flavorless, a mixture on broccolini, zucchini, onions and peppers and mixed in with the pasta (penne) that did not have enough sauce on it. The sauce was fair, not bad, but nothing special. Either the penne or veggies had not been drained well enough because there was a pool of water under the pasta, an unforgivable faux pas and pet peeve of mine. 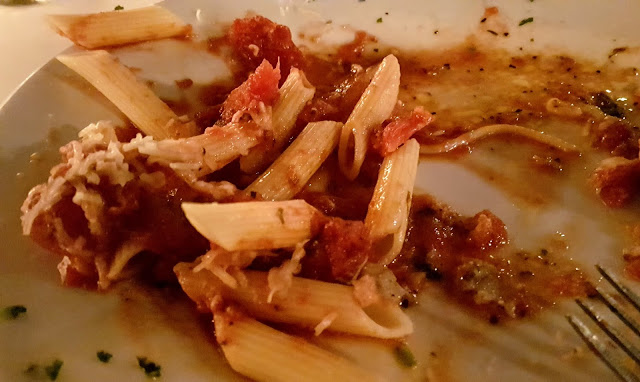 If you are paying $25 for an à la carte entrée, they could at least drain the pasta and put enough sauce on it so you do not have to eat plain, watery penne ... barf! They also do not serve bread with your meal, something expected at the vast majority Italian restaurants stateside and at ALL restaurants in Italy. There was not even bread on the menu, except for the $7 garlic bread that costs exactly the same on both the regular and happy hour menus. 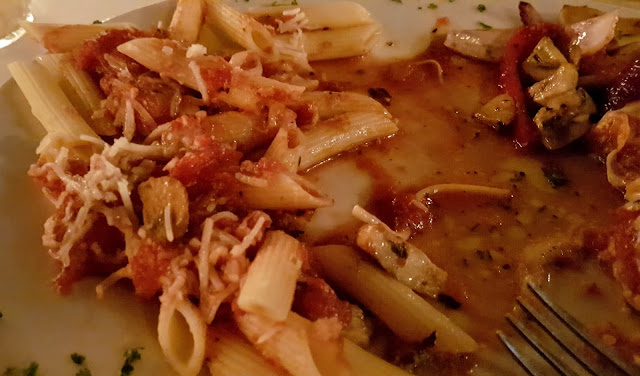 The numerous "5-star" reviews indicate that they have obviously never been to Italy, having likely eaten only in Portland's dearth of decent Italian restaurants, so Caro Amico's 3.5 -star Yelp average seems a bit high to me. I give them deductions for a lukewarm reception, shoving us into the dark and dingy bar with a grumpy bartender, lack of bread with our meal, a lousy happy hour menu, watery pasta, and not so cheap à la carte menu. Based on this, our first visit, we will not be returning anytime soon ... not impressed in the least.