I have been wanting to try Merchants since they opened over three years ago, but every time I checked their menu online, it just did not inspire me. Local hipsters and metrosexuals gave them high marks, raving about their food and beer options, but these are the same people that gives 5-stars (10 Bombs in my book, a rating reserved for only the very Best in Value) to some of the many mediocre restaurants in Lawrence. As a matter of fact, links on Merchants' website list them among "The Best Restaurants In Lawrence, Kansas" (KCUR Radio) and "Lawrence is a great day trip for foodies" (Kansas City Star), along with several less than stellar Lawrence restaurants, according to Kansas City media outlets. 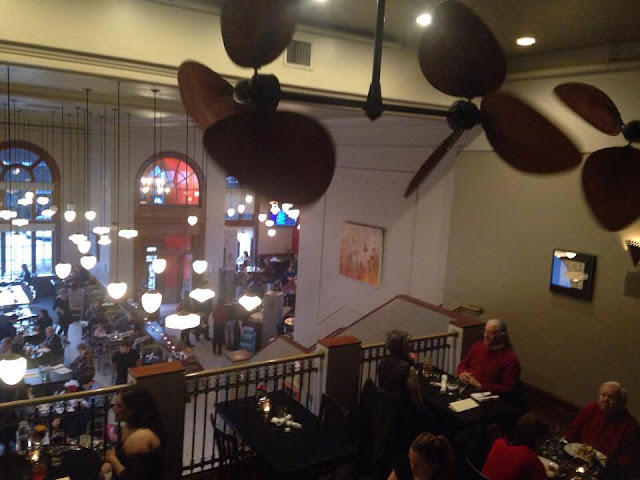 We arrived at around 5:30 for our Valentine's Day reservation, having been called the day before to confirm our reservation and asked if I was "disabled", a rather odd question. I said no, even though I am an 80% disabled veteran, because it's basically none of their business, and was told "good", we'll put you upstairs then". Rather than make an issue of it, I painfully made my way up the stairs to not the first balcony, but to the very top floor, two stories above the "prime" dining room. I survived, but felt like a second (or is it third because of the floor we were on?) class citizen. 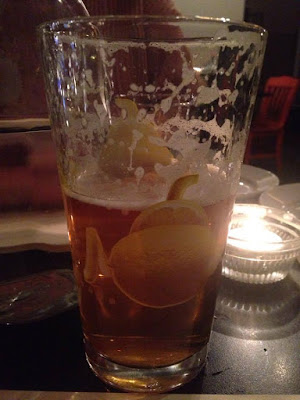 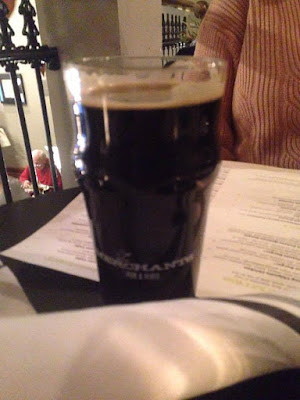 Merchants advertises "Happy Hour", but fails to mention anywhere on their website or menu what time Happy Hour actually is. It turns out, after asking our server, that it is from 5pm to 6pm, so I ordered an IPA ($3.50 vice $7) and a porter ($3.25 vice $6.50) before the clock struck six. Both were quite good and a great value at half of their regular price. 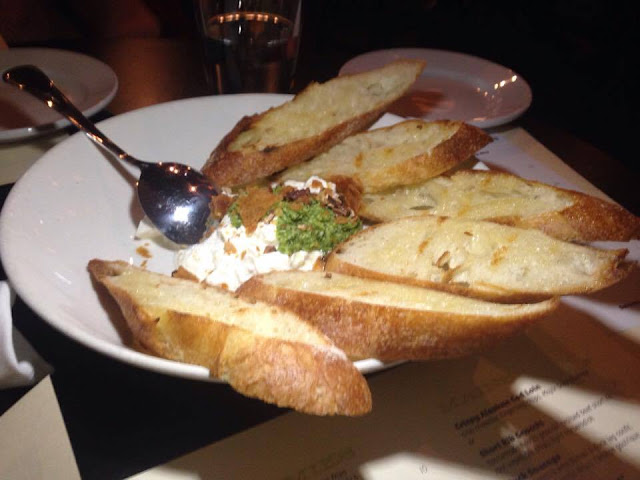 For our appetizer, we were trying to decide between the Local Mushroom Arancini ($9 - arancini are indigenous to my wife's hometown of Naples, Italy) or the Burrata ($10) with broccoli pesto candied garlic, smoked pecan, and slices of grilled Wheatfields baguette. Even though my wife is from Southern Italy and I lived there for three years, neither of us had remembered hearing of "burrata", the menu says nothing about it being made from mozzarella cheese, and our server failed to mention the fact as well. Because the arancini came with a tomato-based sauce (my wife is one of few Italians that hates tomatoes), we decided on the burrata. It was actually quite good, but there was too much of the creamy spread for the six very small slices of baguette. At $10, it was a fair value, but would have been better had it come with a couple more slices of baguette to spread the sweet and savory concoction on. The menu should also mention the fact that burrata is a type of mozzarella cheese because even a Southern Italian had not realized that mozzarella was the main ingredient. 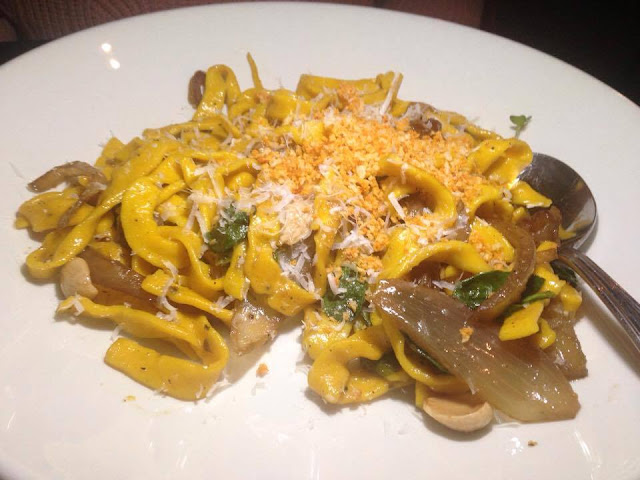 For entrees, my wife had the Housemade Fettucine ($16), a rather skimpy and dry plate of reddish pasta, apparently in a white wine butter garlic sauce with spinach, almond, onion confit, dates, and breadcrumbs. Beside being quite a small portion for the price, it was very dry and tasted mostly of onion. Not a very good dish and my wife, who is not a big eater, was still hungry when she finished it. 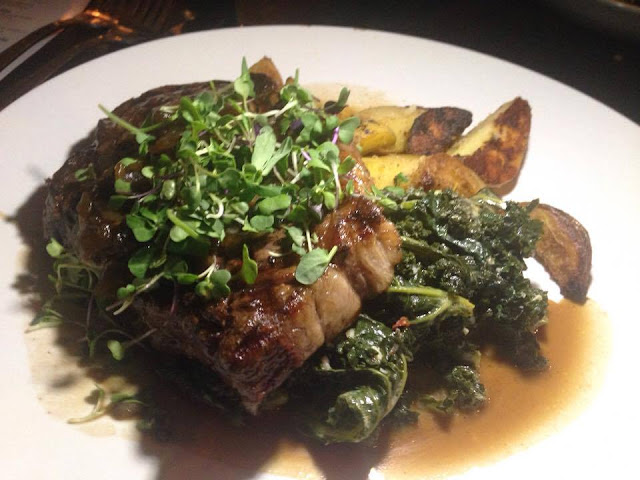 I had the Grilled Ribeye ($32), the most expensive thing on the menu, a 12 ounce steak in a peppercorn, red wine-shallot butter and Worcestershire onion jam sauce (incorrectly spelled "worchestershire" by the way, uncapitalized - Worcestershire is a county in England - and with an "h' where there should not be one). I ordered it medium/medium-well, telling our server that I do not like bloody meat and that a "little pink in the middle" would be great. The steak came out more medium rare than medium well, but even though the server offered to have it cooked some more (meaning "thrown in the microwave"), I declined and ate the "bloody" thing. Even though it was much rarer than I prefer, it was actually quite tender and the sauce extraordinary, making up for unappetizing color of the meat. It came with horseradish roasted potatoes, which were decent, and creamed greens (kale perhaps), which were extremely good. 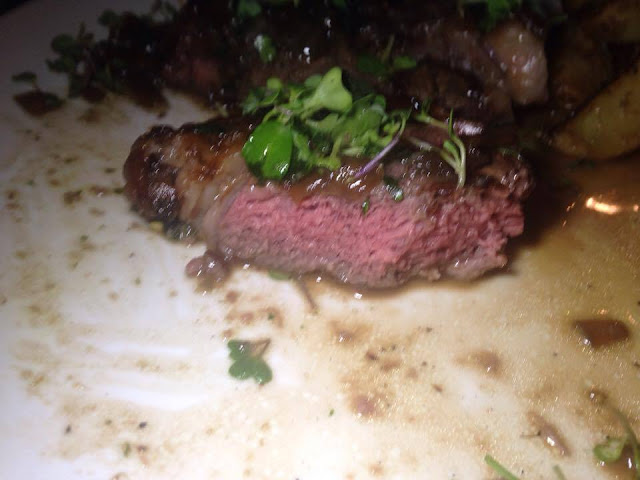 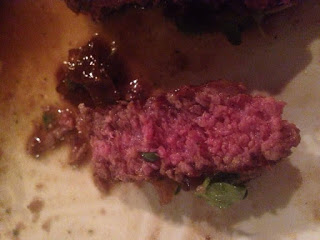 Because my wife was still hungry, and she has a massive sweet tooth, she could not resist the Persian Love Cake ($7), a cardamom sponge cake with "spiced pistachios, rosewater and saffron scented cream, and candied rose petal dust". It sounded quite bizzare on the menu, but was actually quite exotic and tasty, a nice finish to a decent meal. 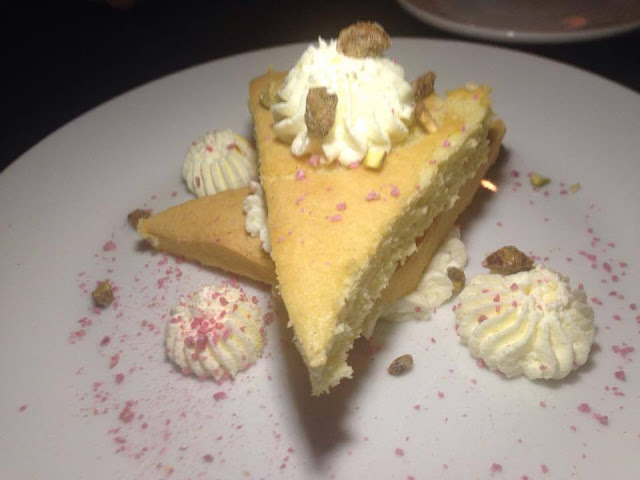 First of all, our server, Devin, was very good, quite attentive, and the highlight of the meal. The atmosphere is also warm and inviting, even if we were in the nosebleed section. However, I got the impression that the chef in particular or the establishment in general are trying a bit too hard to be trendy and "gourmet", pulling it off on some occasions (the steak sauce and the dessert) and not on others (the pasta and undercooked steak). The prices are not exorbitant, but when you drop a C-note for dinner, it should be closer to flawless than we experienced at Merchants (e.g. my raw steak).


CombatCritic Gives Merchants Pub And Plate 6 Bombs Out Of 10 With Deductions For The Measly Portion Of Pasta (1 Bomb), Bloody Meat (2 Bombs), And "Nosebleed Section" Table (1 Bomb) ... More Bombs Are Better! 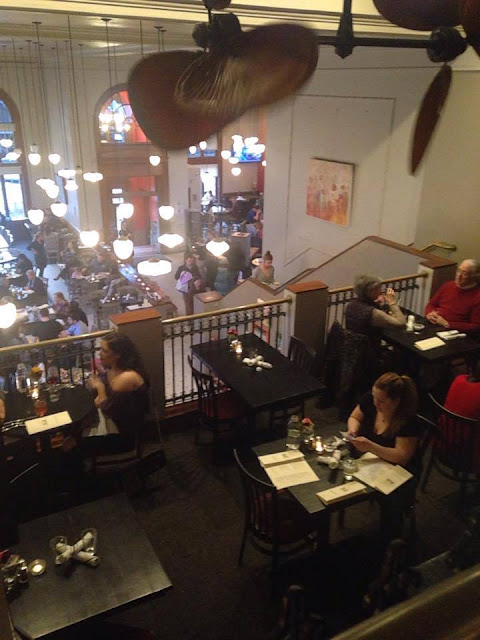