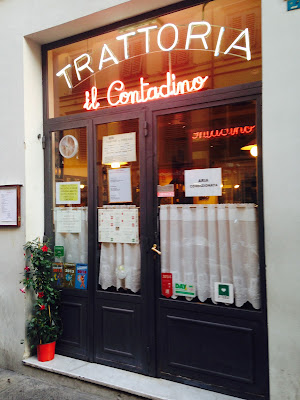 Trattoria Da Giorgo, just down the street, is closed on Sunday and was not an option after our return to the train station from a day trip in Siena, so we decided to try Il Contadino. They have decent food and lots of it with cheap prices compared to the rest of the overpriced tourist traps in Florence. Unlike many restaurants in Italy, they are open seven days a week from noon (12:00) until 10:30pm (22:30), so you can get a meal anytime you like. Arriving around 7:00pm on a Sunday night after a long day in the Tuscan sun, we were quickly seated and shortly thereafter our waiter arrived. 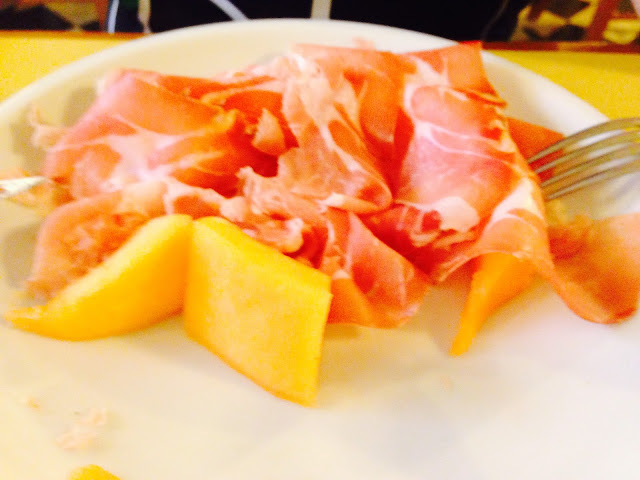 That was the most efficient service we received the rest of the night because as he and his female counterpart hovered around our table in the nearly empty restaurant, making for a rather uncomfortable experience, they chatted with each other and their friends at the next table. However, when we needed something, we had to try to catch their eye rather than counting on them to notice when they were needed instead of socializing with each other.

Tagiatelle alla Boscailola, a long, thin pasta in a tomato-based sauce with ground beef, mushrooms, and black olives was my choice as a primo. The tagliatelle were good with rich, earthy tones from the mushrooms and unlike more than a few Tuscan restaurants we have been to recently, perfectly cooked “al dente”. My wife decided to forgo the meat dish, so she ordered the prosciutto e melone (cured ham and and honeydew melon) for her primo. Being difficult to improve on sliced ham and melon, her first course was as good a most places and a fair size portion.

For secondi I had the scaloppine ai funghi (pork cutlets in a white wine and mushroom sauce). The meat was very dry and had obviously been sitting around much of the day waiting for a customer to arrive. The sauce was good and there was plenty of it, but a few more mushrooms would have been nice. My wife had the risotto with zucchini and gorgonzola, creamy with a bit of zing from the aged cheese, it could have cooked a minute or two longer to reach the desired consistency of a classic risotto. Our contorni were patate fritte (French fries), crispy but not very hot, and patate arrosto (roasted potatoes) which, like the pork, had also been sitting in a chafing dish for far too long. 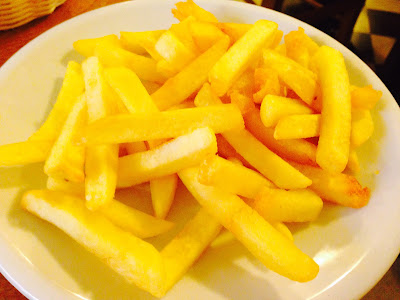 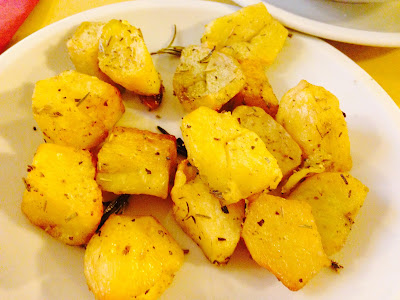 We had to remind the waiter two times to bring our wine, a local red, which was decent, lightly chilled and fruity. Instead of bringing a half-liter for the two of us, he brought a single one-quarter liter carafe five to ten minutes after our primi had arrived and another carafe, having to ask him once again, after our second courses had arrived. With so few people in the restaurant, there is really no excuse for such inattentive service.

The restaurant is clean and bright even though it is in a rather seedy part of town, but we were somewhat disappointed by the food and very disappointed by the service. When I gave the waiter my card, telling him that I would post a review on my blog, TripAdvisor, and Yelp, he said "So what? I can post a review on TripAdvisor, so what makes you different from me?" I told him that I am Yelp 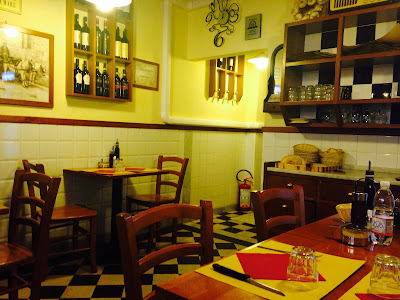 "Elite", a TripAdvisor "Top Contributor", and have a blog averaging 40,000 views a year. Enough said.

You will have a better meal in Italy for €30 or less, several places come to mind, but in Florence, with its dearth of reasonably priced restaurants, you will not find many inexpensive options. Although our experience was somewhat disappointing, the food was not bad overall and the prices fair. So if Trattoria da Giorgio just down the street is closed or too full, Trattoria il Contadino would be a decent second choice. 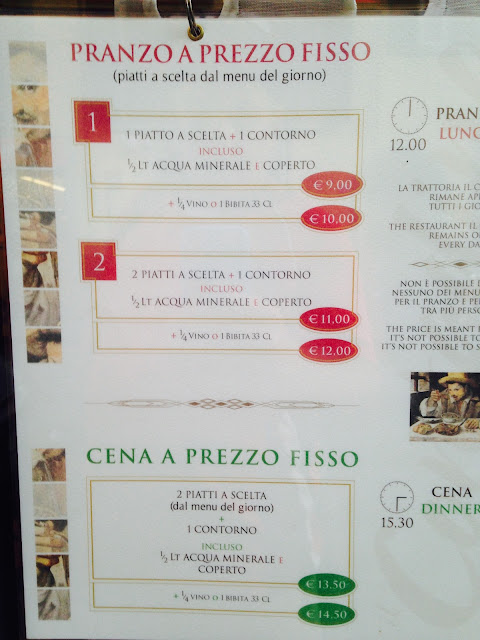 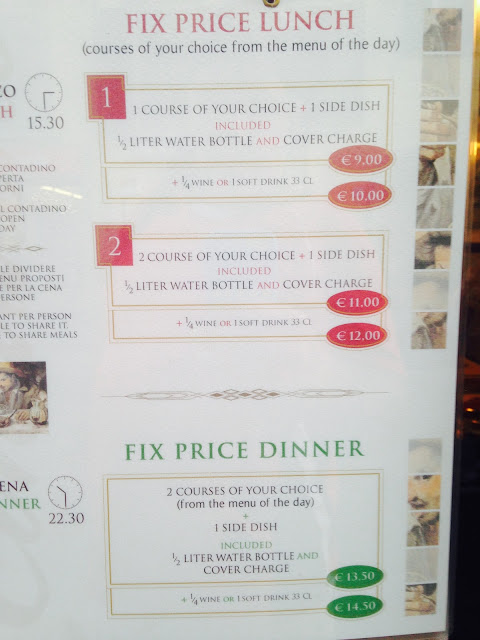 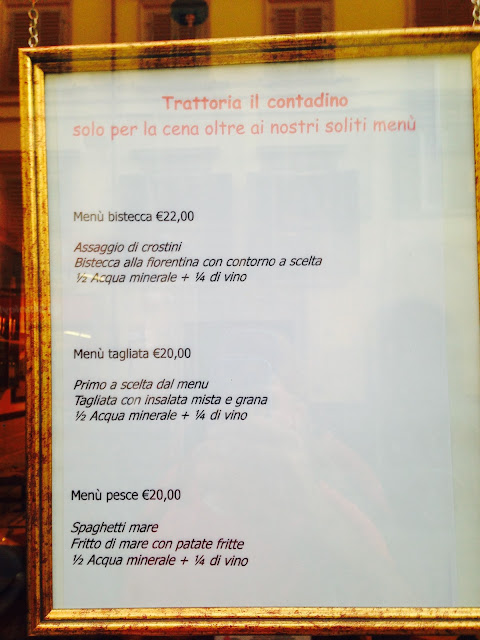 Menu of the Day (Italian) 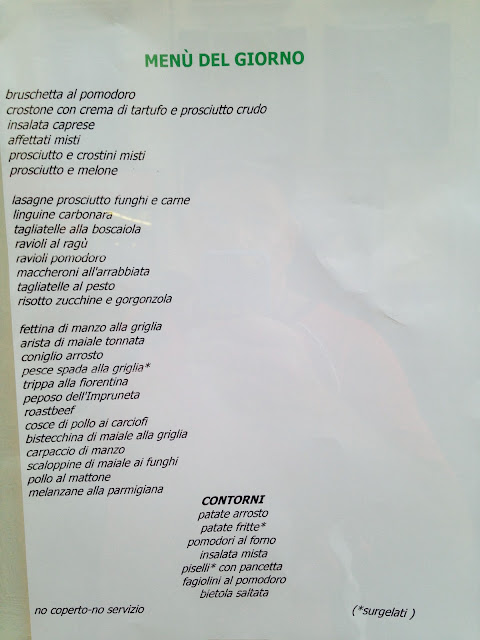 Menu of the Day (English) 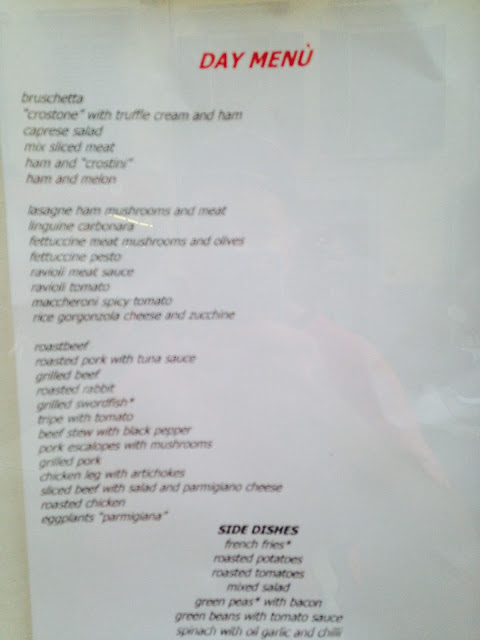