Wichita, KS: By Georges, This Wichita Bistro Is La Bombe!

When we arrived, the young hostess ignored us for a few minutes until she finished bussing a table. She finally asked if we had a reservation and I told her that I had been emailing back and forth with the owner who had confirmed our 6:30 reservation even though we were a bit early. There was no reservation listed, but she said "no problem" and asked if we wanted a high-top. I told her we did not, so she proceeded to take us to a table for four. 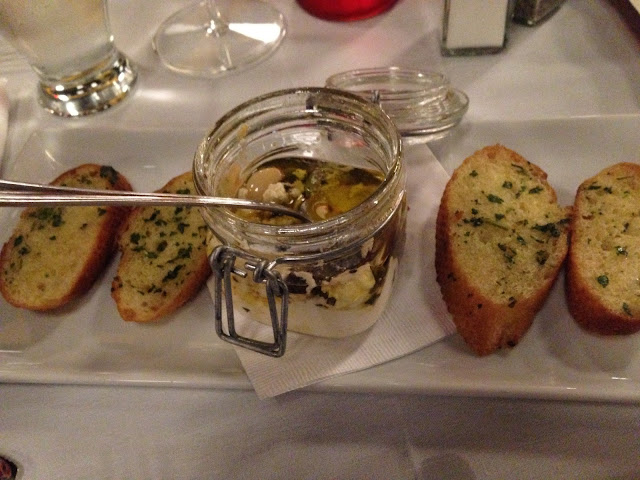 The place is not huge, having 20 or so tables and high-tops, but was full on a Wednesday night and just a couple weeks after opening, so they must be doing something right.

We ordered a bottle of "The Dark" ($29), a deep, red wine, but our server could not tell me the varieties of grapes included. She guessed "Cabernet Sauvignon?" and "Pinot Noir?", but it would have been nice to know if it was 100% Cabernet or a Cabernet/Syrah blend. I prefer Syrahs first, then Cabernets, so blends are fine, but this one ended up being a very good choice. The color was a deep red and the flavor robust with fruity and peppery overtones. The wine menu is limited and glasses start at $8, bottles at $27, so it would be nice to have a "value option" at $6 per glass or under $24 per bottle for those on a budget.

The food was wonderful and very reasonably priced. We shared the Parisien Cheese Dip ($9), a blend of warm ricotta cheese, olive oil, spices, olives, and halved cherry tomatoes served with six small slices of toasted baguette. The dip was very tasty, but the bread quickly disappeared, so I asked the server if we could possibly get some more, un-toasted. I then noticed there were no bread baskets on any of the tables, quite odd for a French restaurant where bread is normally the first thing they bring out. We waited patiently for our bread and after ten minutes or so our server returned, looked at our dip, and asked if we wanted some more bread. I told her that we never received the bread we originally asked for, so she went in the back and returned five minutes later with two small pieces. 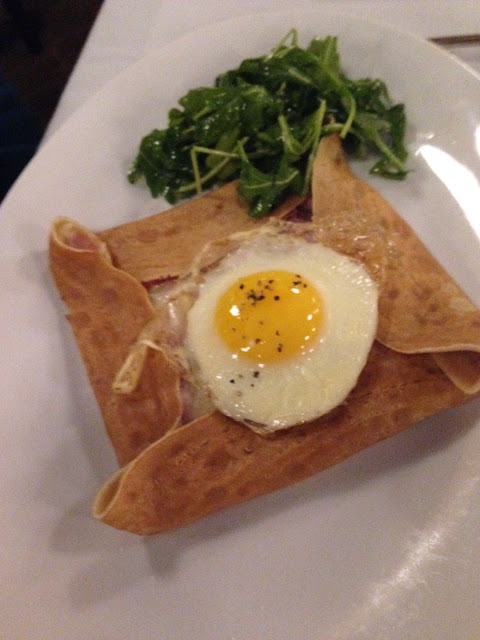 My wife had the Crêpe Diane ($9), a crispy, square shaped crêpe with smoked ham and Gruyére cheese inside and topped with an over-medium egg on top, accompanied by a bit of salad on the plate. It was savory and delicious as well as being a very good value.

I ordered the Steak Frites, about six ounces of grilled sirloin topped with L'Entrocôte de Paris sauce and accompanied by frites (French fries). The steak was perfectly cooked and tender, the sauce tasty, but not overbearing, and the fries hand-cut, crispy, and hot. 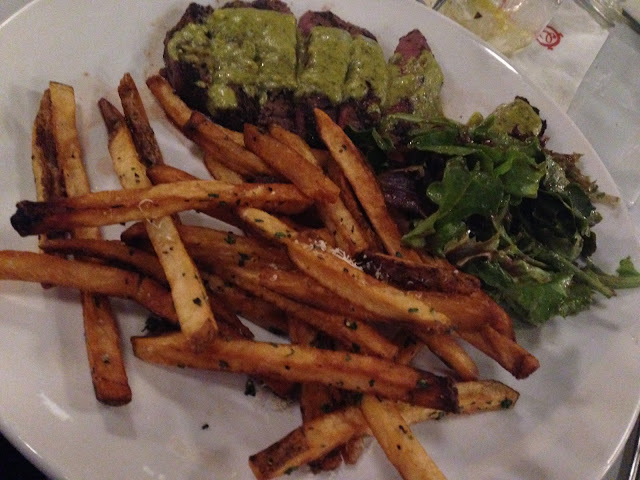 Georges, the owner, stopped by twice during our meal to introduce himself and ask about our meal. He is a very nice and obviously talented man in his 30s whose two lovely young children arrived during one of his stops. I told him that our meal was very good and the prices fair, but that the bread situation was a bit of a concern. French cuisine is known for its sauces and those sauces, escargots in particular, require bread to mop up the leftover sauce. He told me that he does not want to serve bread unless he bakes it himself, an admirable intention, but there has to be a bakery in Wichita where he can get decent baquettes until he acquires the capability. I know the local Dillon's supermarkets have decent baguettes and even they would do over no bread at all. I am sure he will figure it out because he seems intent on creating a positive customer experience. 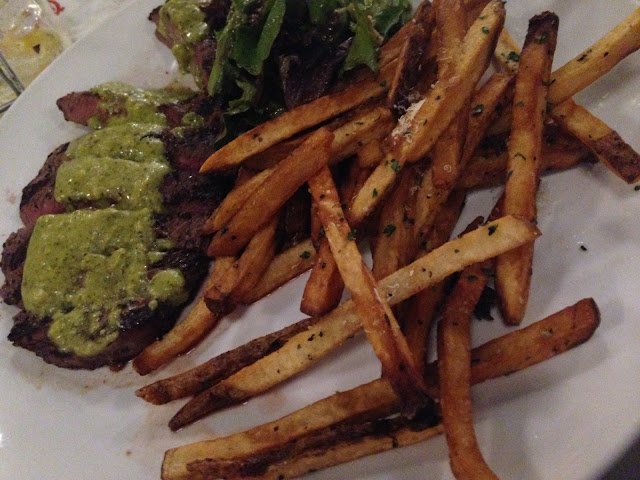 My wife and I were discussing sharing a Crème Brûlée and just a few minutes after Georges' final visit ... voilà ... a complimentary Crème Brûlée ($6) arrived! It was not necessary as we were very pleased with our meal and the service, but a nice touch nonetheless. It was delicious - thank you Georges!

At $65 ($78 including tip) for a shared appetizer, two entrees, and a bottle of wine, Georges French Bistro is an excellent value. The food was outstanding, the environment comfortable, and the service quite good. A bit more attention to detail by the staff (reservation problem, inability to explain grape content in the wine, extra bread for dip), a good basket of bread on each table, and a larger wine list with a couple value options will make this a FIVE STAR (10 Bomb) restaurant very soon. Next time we are in Wichita, Georges will be our first choice for dinner.

Title: By Georges, This Wichita Bistro Is La Bombe!