Located just south of Omaha's Old Market area, Jackson Street Tavern was selected for us by the coordinator of a conference we attended, otherwise we likely would not have chosen it ourselves. 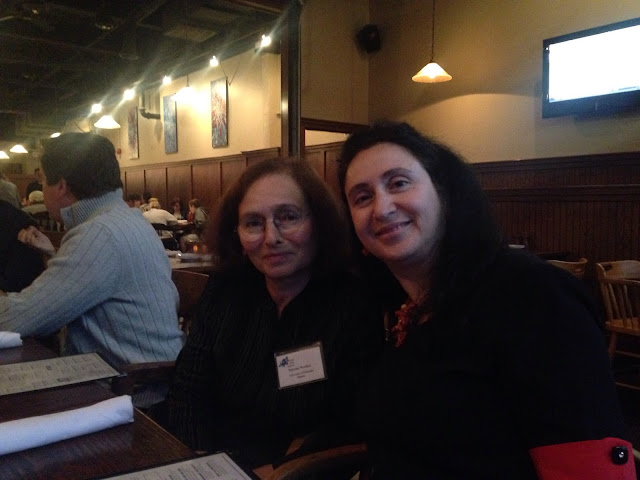 No IPA on tap and no Wi-Fi? Unheard of, but that was the case. Off to a bad start, particularly because the Dodgers were playing in the first game of the NLDS against the Nationals and I wanted to see the rest of the game.

The draft beers they had were $7 or listed "Market Price", slang for "too expensive to list on our menu", so I went with a local bottle of Zipline IPA for $4.50, the least expensive beer on the menu.  I also tried Zipline's Porter and both were cold and good.
Also cold were the fries that came with my "French Dip" ($16). The sandwich was about the size of half a Subway footlong with about as much meat (the real thing, not the ones they show you in their commercials). The sandwich was OK, but for $16 a few more ounces of beef and warm fries would have been nice.
My wife had the "Local Wagyu Burger", coming with caramelized onion, cheddar cheese, bacon, tomato, lettuce, and "aioli" on a brioche bun as well as more cold fries. The burger was decent, but not worth $15. A similar burger at Dempsey's or The Burger Stand at The Casbah back in Lawrence would top out at $10 for example.
Read Chris S.'s review of Dempsey's Burger Pub on Yelp
Long and narrow, the space has brick walls (in an old building) and tall ceilings, making the obnoxiously loud patrons even louder and impossible to carry on a conversation with the person next to you. The short blonde hostess who failed to even greet us on arrival was impersonal and unfriendly, showing us to our table with barely a word. Our server was semi-friendly and fairly efficient, the highlight of the night and that is not saying much. Our server did manage to have the nearest TV changed to FS1 so I could watch the end of the Dodgers vs Nationals game, which the Dodgers won 4-3 by the way ... one down and ten to go to the 2016 World Championship ... HOOAH!
CombatCritic And Chloe Give Jackson Street Tavern A Measly 3 Bombs Out Of 10 ... More Bombs Are Better!

Translation for Civilians: SNAFU ="Situation Normal, All Fucked Up"
Author: CombatCritic at 9:36:00 AM