Lawrence, KS: A "World" Away From a Great Cafe


I have to agree with my fellow Elite and friend Scott T in his less than stellar impression of Global Cafe. We also sat for nearly 10 minutes while the two servers walked to and fro, ignoring us to clean tables rather than greet us and give us menus.

Once the server arrived, turns out she is one of the owners, we got a lukewarm greeting, menus, and an inquiry about what we wanted to drink. I said: "I'll have a coffee please", but she said, "let me get you a drink menu". I just ordered a coffee! Once the drink menu arrived, the $2.50 price tag for a cup of drip coffee seemed excessive, so I opted for ice water. 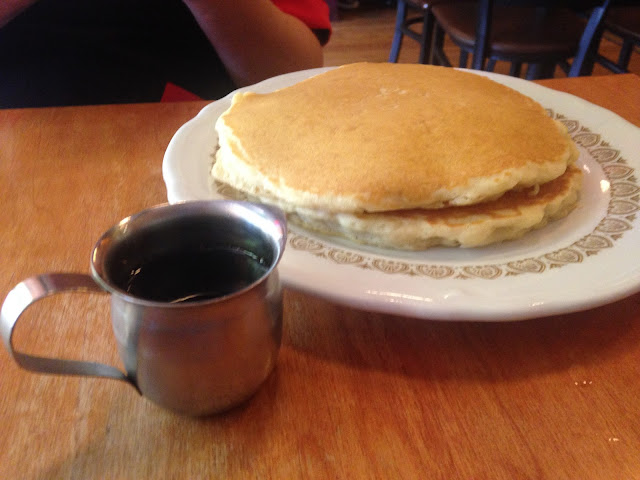 My wife ordered a short stack of pancakes, two large pancakes for $3.75 and an extra $1.50 for a tiny pitcher of "real maple syrup". I guess you get Aunt Jemima syrup and a high fructose corn syrup buzz if you opt out of the "real" thing. Anyway, the pancakes were pancakes, nothing special. 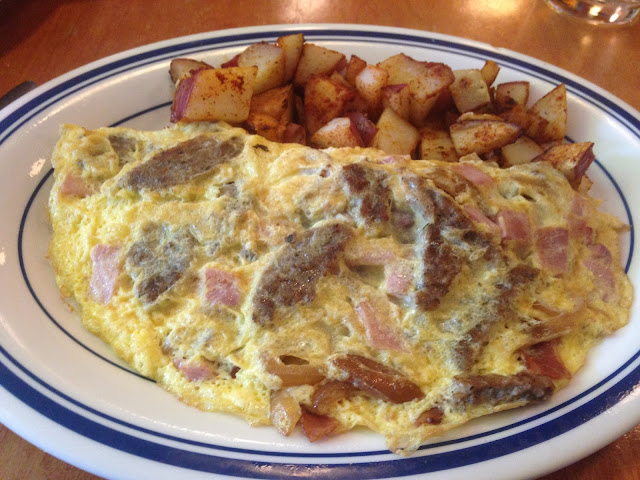 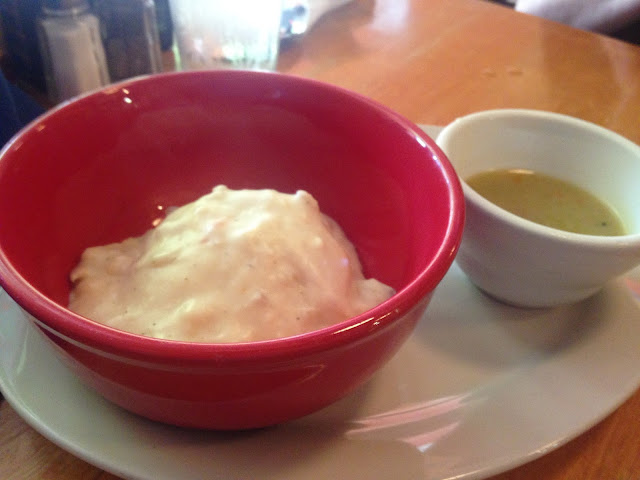 I had the Carnivore Omelet ($8.75) and a half order of biscuits and gravy, which were not on the menu, but advertised on a sign out front (with no price). The carnivore omelet came with ham, bacon, sausage, caramelized onions and sharp cheddar cheese, but very little of each and what was there was cooked into the omelet rather than folded on the inside. It came with "two sides" (toast, breakfast potatoes, cottage cheese, or sliced tomato), but the only enticing side was the potatoes, so I asked for a double order. I would hate to see a single side order of potatoes because the "double" side was extremely sparse and void of much taste. The biscuit and gravy came with green chili, an odd topping for biscuits and gravy (apparently a "New Mexico specialty"), so I asked for it on the side. The biscuit was small, the gravy thick, but rather tasteless (no sausage or bacon in sight), and the green chili thin (not thick as true green chili should be) and watery, but very spicy. 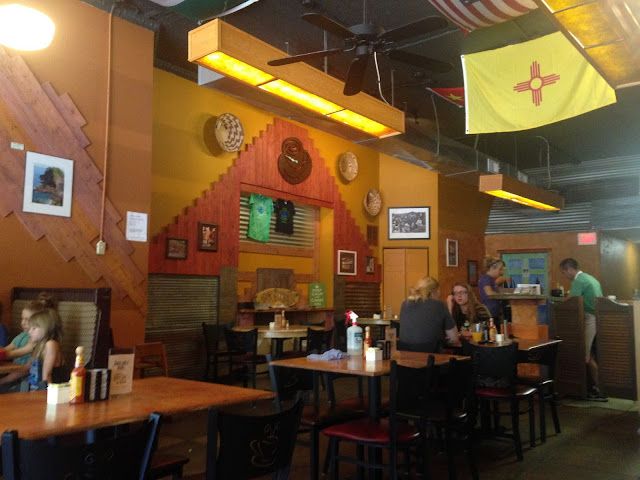 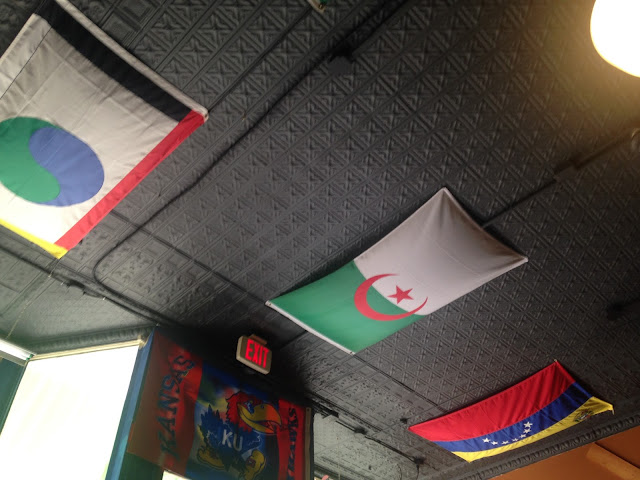 I have had much better breakfasts in town, so I doubt we will be returning here anytime soon. The interior is nothing special, the ceiling covered in flags of the world (hence the name I guess), and the service not very attentive, but semi-friendly. Therefore, ... 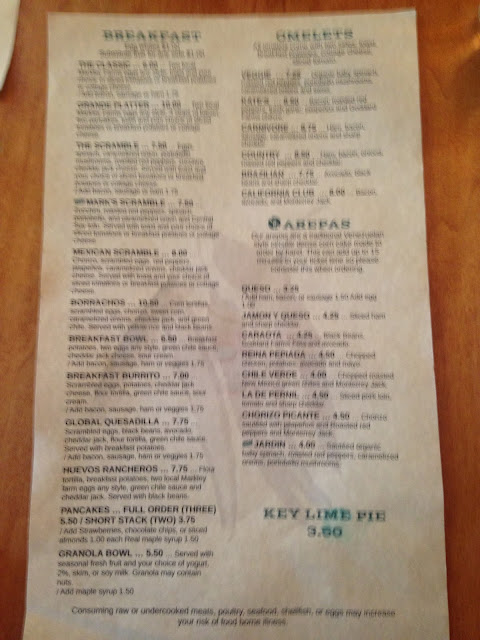 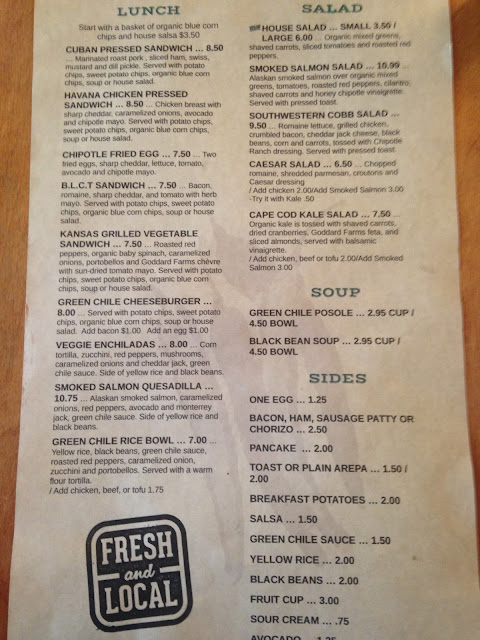 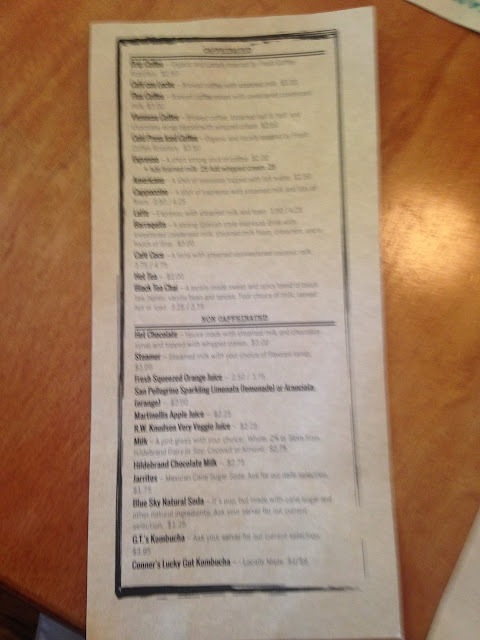 Title: Lawrence, KS: A "World" Away From a Great Cafe