Lyon, France: One Mother Of A Meal ... Thanks Jean!

It was a misty December night in Place Bellecour, the top of the brilliantly lit blue Ferris wheel that dominates the square barely visible beneath the low-lying cloud cover. I was thinking about our meal just a few nights before just around the corner on Rue Marroniers and how good it was, but little did I know that the dinner waiting just ahead was going to be even better. It is no wonder that Lyon is the culinary capital of France, if not the World. 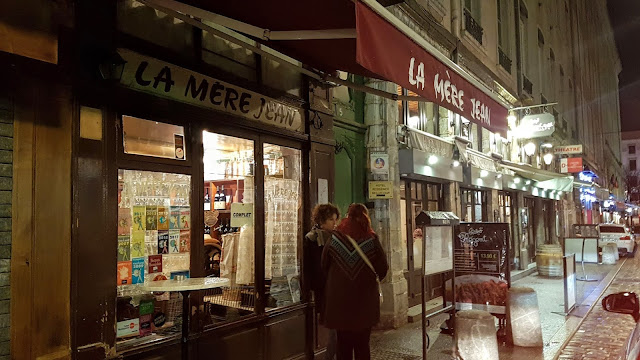 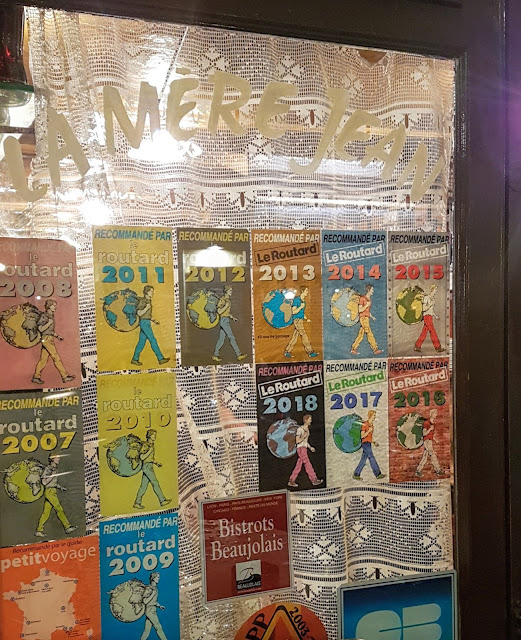 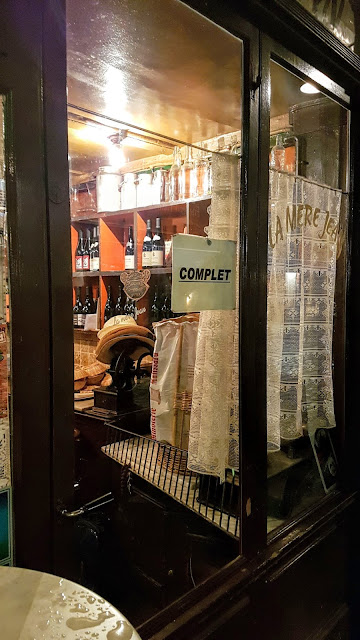 We visited Le Mère Jean, which translates to "The Mother Jean", on our first night in Lyon, a damp, chilly Saturday night, but she was fully booked - "Complet" - so we reserved a table for the following Monday at 7pm. The proprietor, Jean perhaps, recommended Les Comptoirs de Marroniers just down the cobblestone covered road, having learned to cook there as we were told. They were kind enough to make room for us based on her thoughtful recommendation and the subsequent meal was outrageous, a Lyonnaise four-course meal that blew my socks off for just €36, but that my friends is another story altogether. 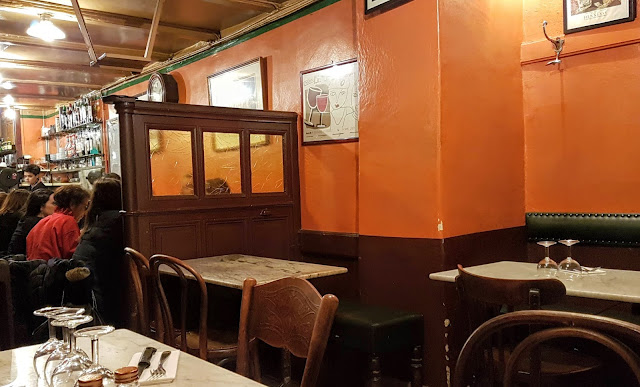 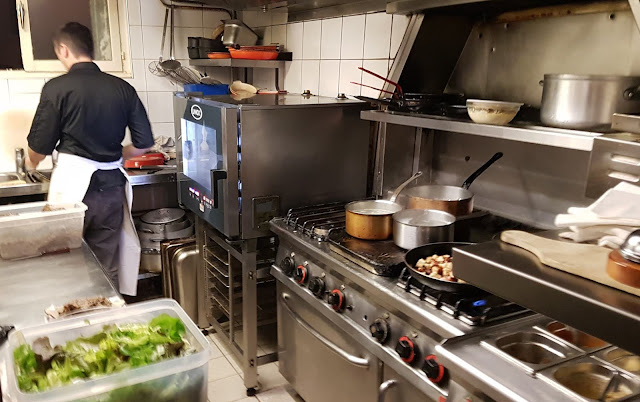 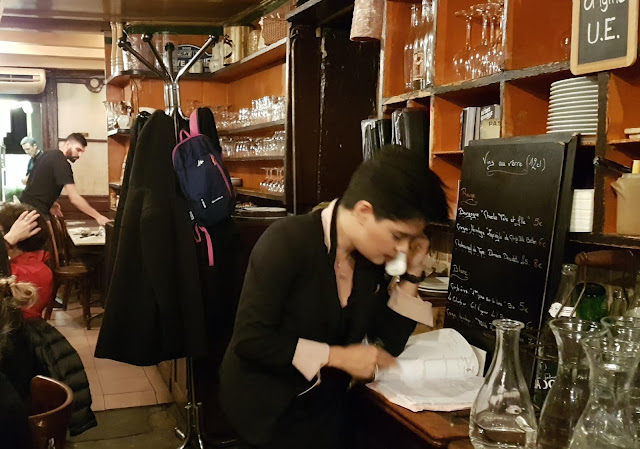 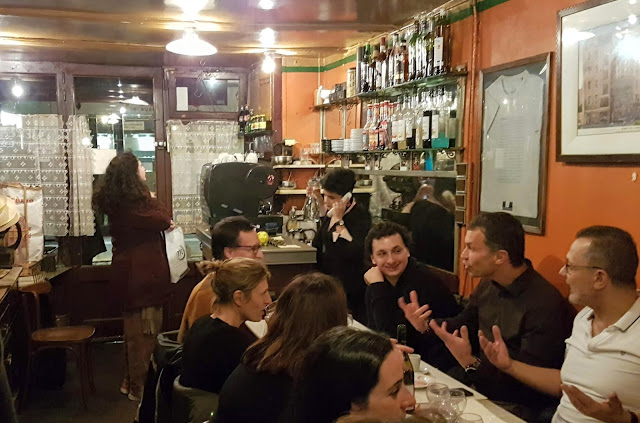 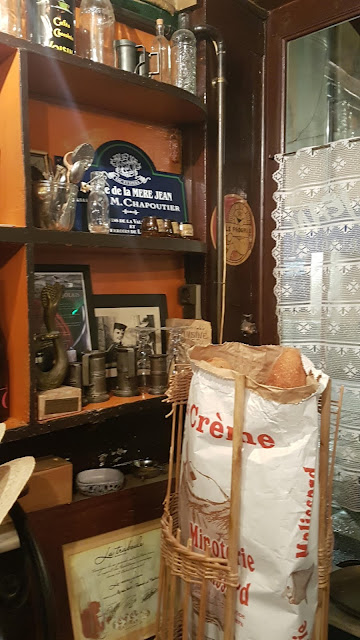 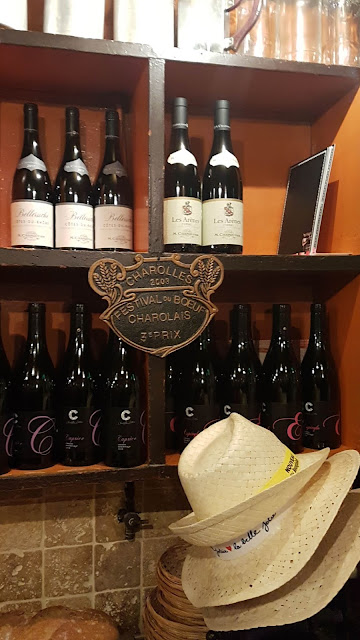 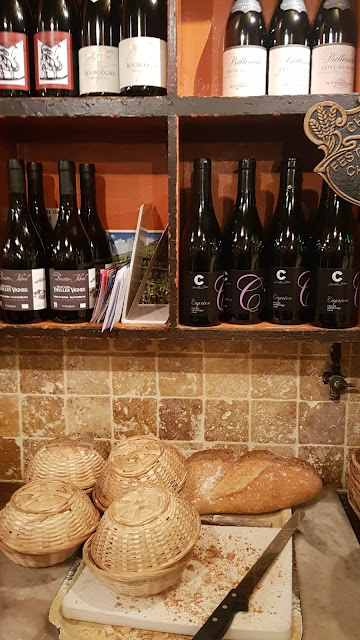 Le Mere Jean is a small place in an old building, long and narrow, seating only 20-25 diners in a rustic dining room with a tiny kitchen at the back. That small kitchen produced a lot of chow, very good chow, generating a fair amount of heat in the process. A tad warmer than we would have desired, particularly because we were dressed for winter, we quickly acclimated in order to focus on the task at hand. A three-course dinner was waiting for my wife (from the €16 menu) and I (the €19.50 menu) with a 50cl bottle of Cote du Rhone setting us back a mere (no pun intended) €12, a pittance comparatively speaking. 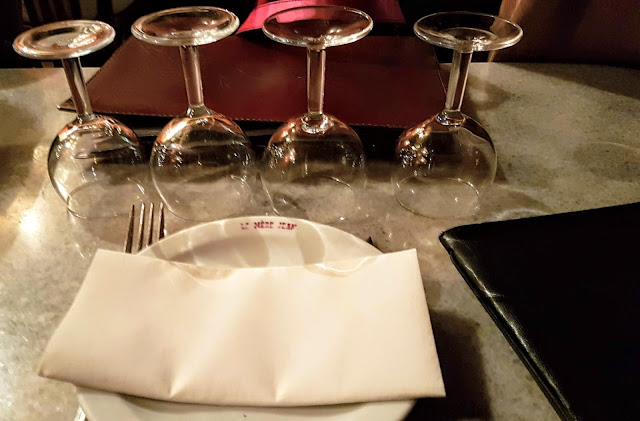 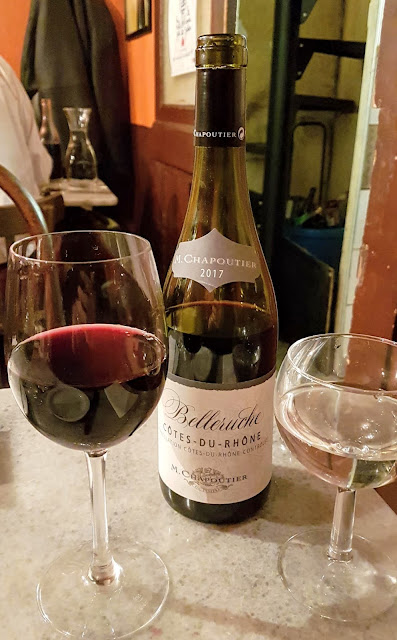 Our first course, or “entrée” as it referred to here, was the Salade Lyonnaise, a huge bowl of fresh, seasonal greens topped with chunks of hot, salty bacon, homemade croutons galore, and two perfectly cooked poached eggs sitting on top. There was more than enough for the two of us and was absolutely wonderful, a recipe I shall incorporate into my own repertoire when we finally get back home. 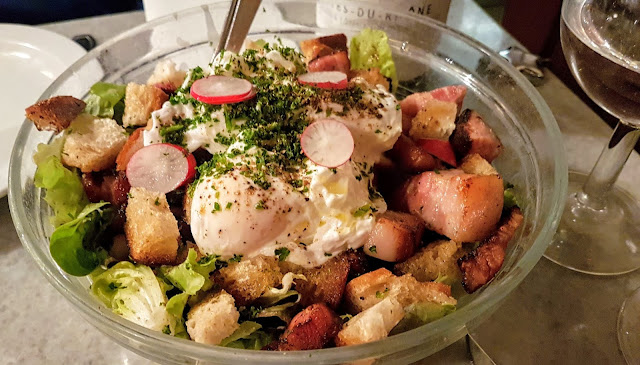 For our second course, or “plat”, my wife decided on the Chicken Fricasee, large chunks of de-boned chicken breast in a cream sauce that was both rich and flavorful. The Onglet de Bœuf Poêlè Sauce St Marcellin, a steak in a savory cheese sauce, was my choice, accompanied by potatoes Lyonnaise which are very similar to what many have come to know as potatoes au gratin. The steak was of a reasonable portion, about eight to ten ounces (500g), tender, and perfectly cooked to medium on the inside with just the right amount of char out. The cheese sauce that enveloped it was made from the local St Marcellin cheese, a savory, gooey concoction only the French could devise … MERCI BEAUCOUP! 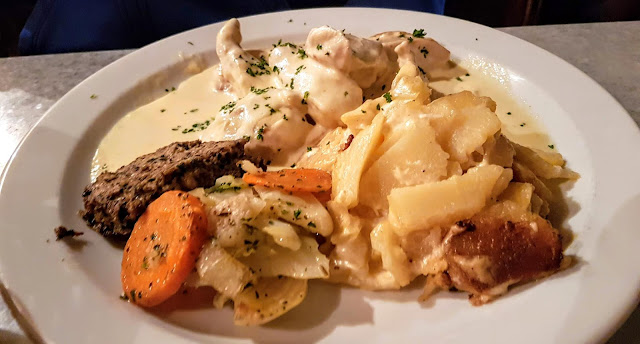 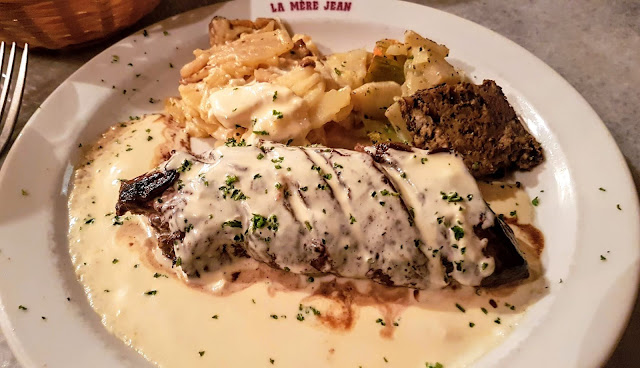 For our third and final course, dessert, my wife had the local favorite, a praline tart. Lyon is famous for their pralines, a pink candy-coated almond I have only seen here. They make a variety of desserts with them, including a praline brioche and, in this case, a crispy, baked pastry filled with a praline cream that resembled a small strawberry pie ... YUM! I had a warm chocolate cake surrounded by a sweet cream that was rich and delicious. 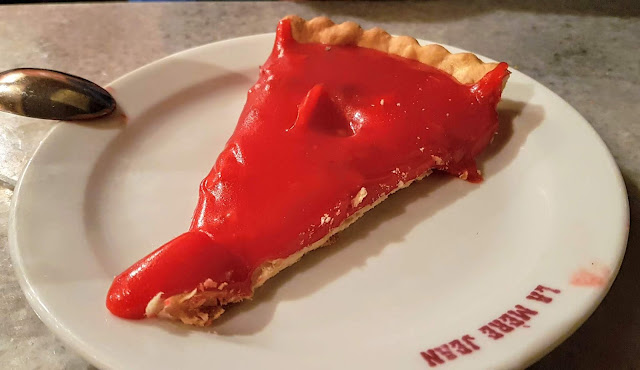 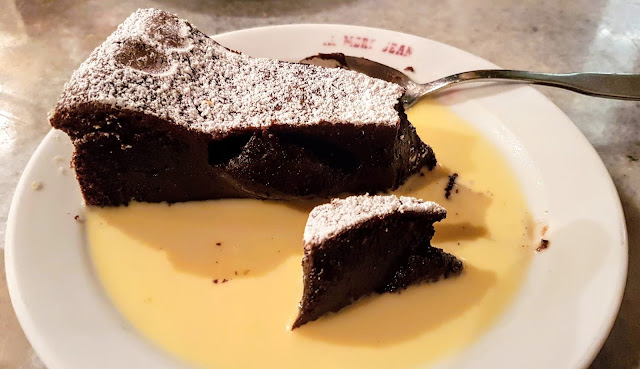 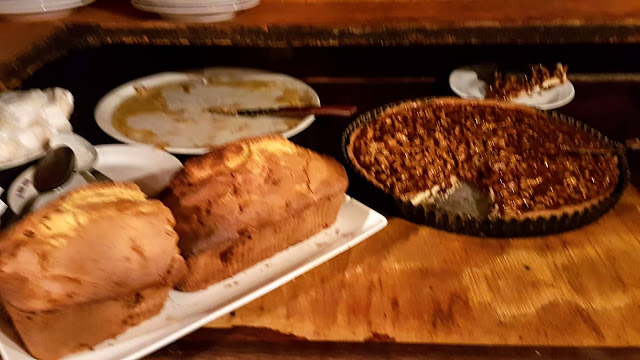 An incredible dinner for two, both three-course meals, and a bottle of wine set us back just $65, the best $65 I have spent in a long, long time. I am sure that I will fondly reminisce about my many superb meals while visiting Lyon, but this was one that I will not soon forget … HOOAH!

CombatCritic Gives Mère de Jean 10 Bombs Out Of 10 And A Spot On My WALL OF FAME … More Bombs Are Better!

When in France ... Follow Me To TravelValue on my new page: 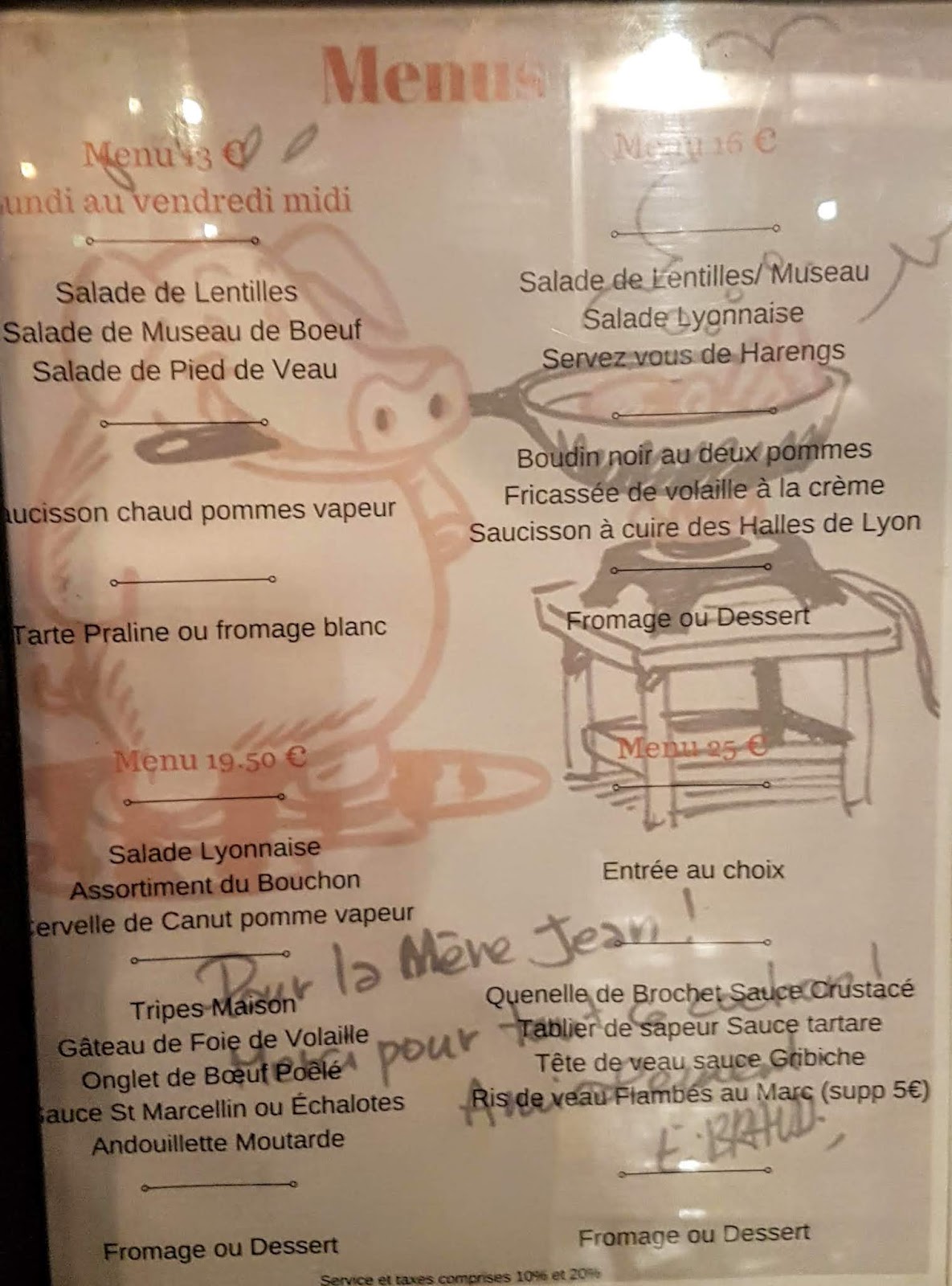 Title: Lyon, France: One Mother Of A Meal ... Thanks Jean!