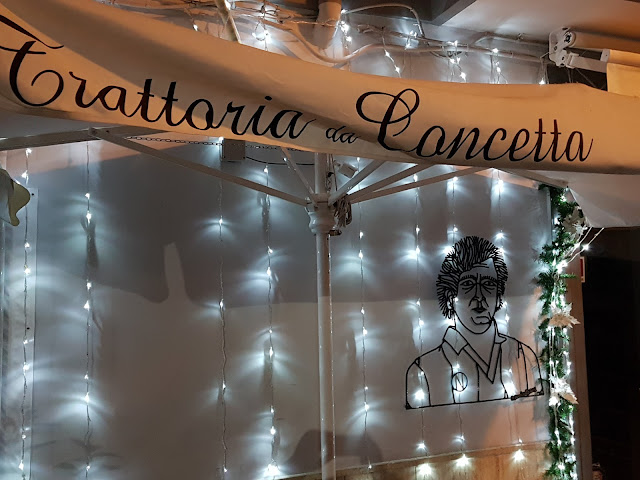 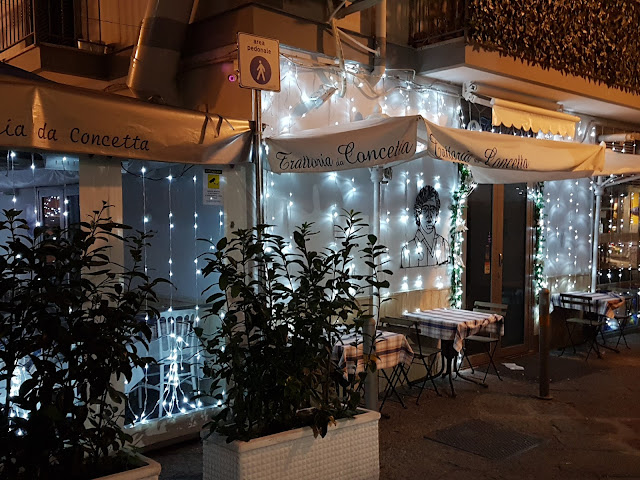 They open relatively early for dinner by Italian standards, around 7:00PM or 7:15PM, depending on where you look. I had been sick for three days, not eating much and was suddenly famished. I had seen "Da Concetta" the previous evening on my way to the farmacia to get some drugs, but it was early and they were closed. Returning the next evening, the lights were on and bright, almost too bright, and there were guests sitting in the exterior, clear plastic walled tent. I entered. 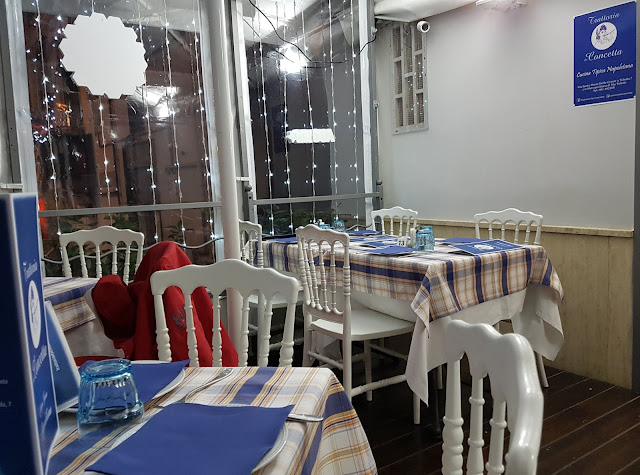 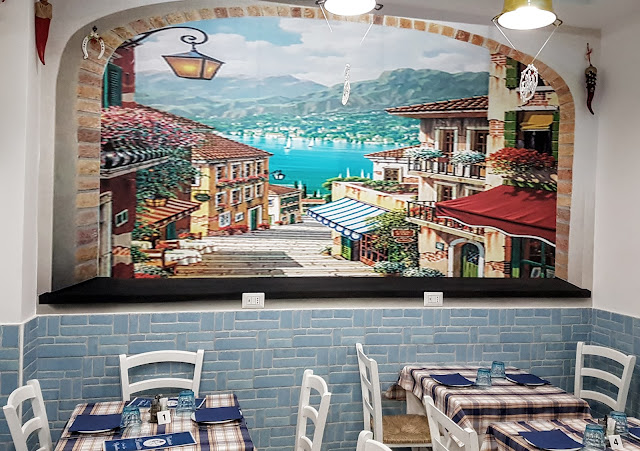 I had made a reservation on a competitor's website - who shall remain nameless, but has a much bigger presence in Europe than Yelp (e.g. this trattoria was not even listed on Yelp, but had 160+ reviews on this "other" travel website). In making my reservation through that website's new reservation service, I also received a 20% discount ... HOOAH! 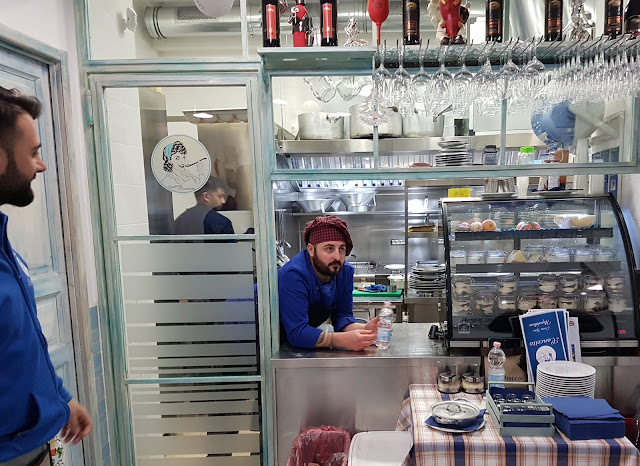 When I entered, they knew who I was, possibly from my profile photo, stating in Italian: "You have a reservation ... yes". I showed them the reservation and was seated. The trattoria is very clean, bright, and trendy by Italian trattoria standards with the "cameriere" ("waiters" - it is a direct translation because most "servers" in Italy are traditionally male, so don't get your knickers in a twist) wearing black pants and "Dodger Blue" (HOOAH) uniform shirts with the trattoria's name and logo on them. My "server" brought a rolled-up paper bag and placed it on the table ... odd. 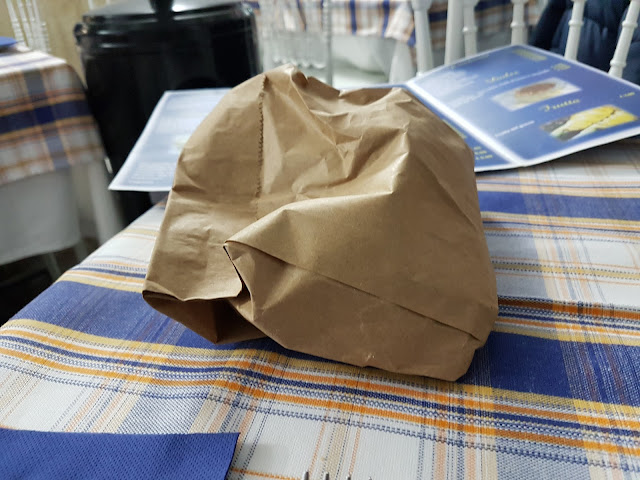 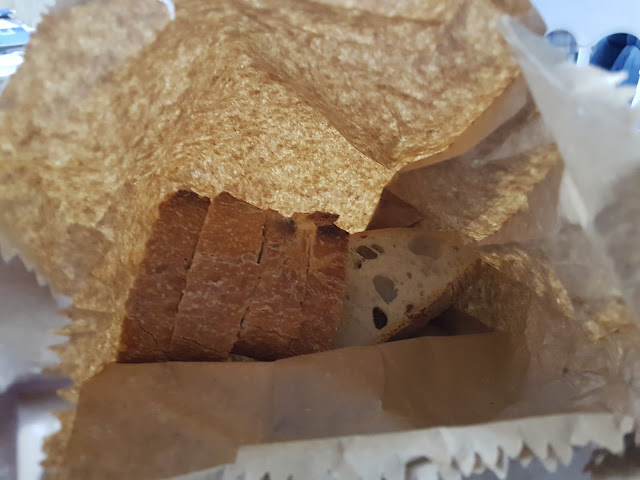 I started by ordering a bottle of aqua minerale frizzante (sparkling mineral water - €1.50) and mezzo litro di vino rosso della casa (1/2 liter of house red wine - €2.50). They were brought post haste and in an uncouth manner taught to me by my grandfather and despised (along with "scarpetta" - more on that later) by my wife, I dipped some of the bread (yes, that was what was in the paper bag, not poop as first entered my mind) in the deep red wine and savored every bite ... YUM! 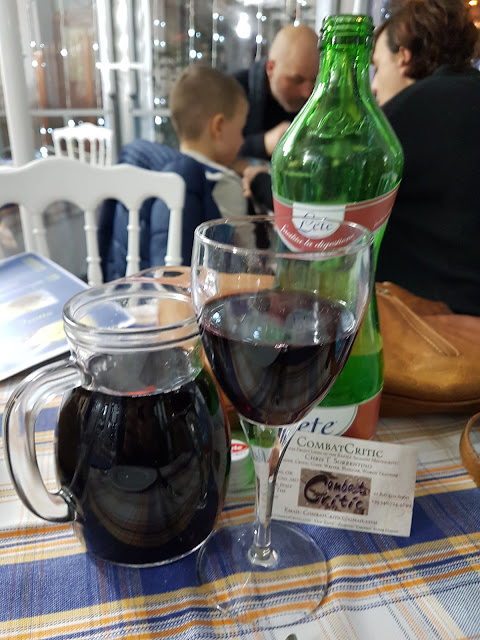 The paper bag contained bread of course because every restaurant in Italy serves bread with the meal (except for places that are strictly "pizzerias" and, therefore, not "restaurants" by definition). They were out of Spaghetti Carbonara (€6), so I went with the server's suggestion, Vermicelli alla Nerano (€7), vermicelli pasta tossed in a sauce of sliced zucchini sauteed in olive oil and topped with Parmigiano Reggiano and basil. Unlike some recent experiences, this pasta was a bit bland, so I asked for some extra grated cheese which helped immensely. I wolfed it down. 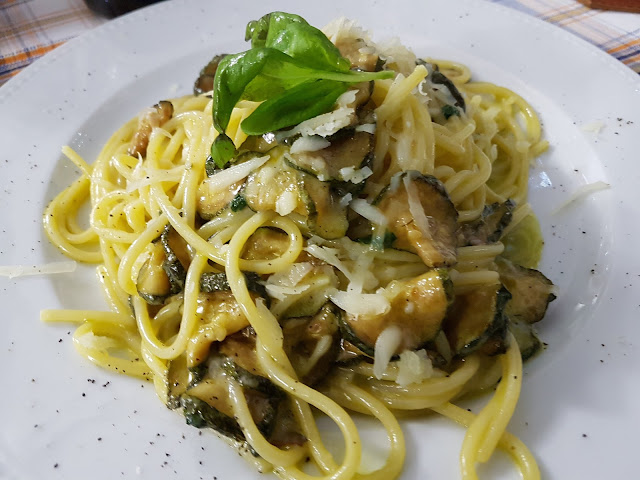 I decided on a traditional Neapolitan dish and one of my favorites, Salsiccia di Maiale alla Brace (€6 - grilled pork sausage) and a side order of Friarielli (€3 - broccoli rabe, "rapini" in Italian, sauteed in olive oil and garlic ... BUONO!). The sausage was good, a tad too pink pork-wise for my liking, but I took the chance and somehow survived. Taking a little friarielli, which you will find primarily in the Naples area, along with a bit of sausage, I mopped-up the excess olive oil with my bread from the plate ("fare la scarpetta" - literally "making the little shoe") and shoved it all in my pie-hole. Quando facio la scarpetta (when I make the little shoe), it is always frowned upon by my wife, put particularly in public where any self-respecting Italian would NEVER fare la scarpetta. Being American, the grandson of a shoemaker, and NOT a self-respecting Italian, I make the scarpetta anywhere I damn well please, in public or not, because it is the highlight of almost any meal. 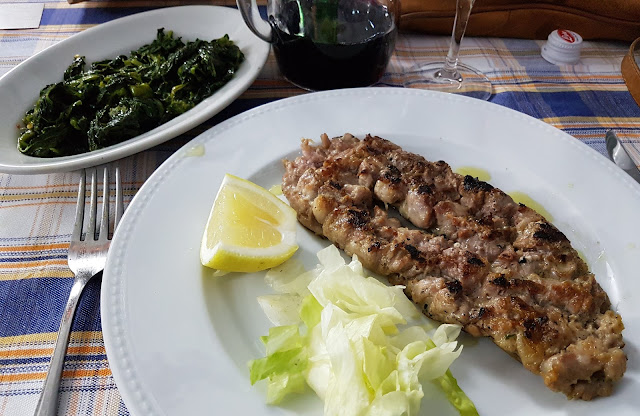 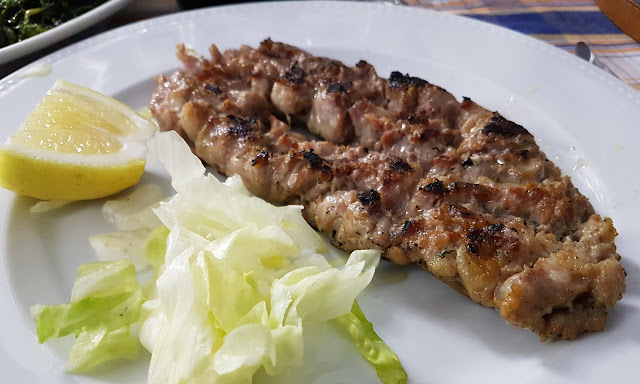 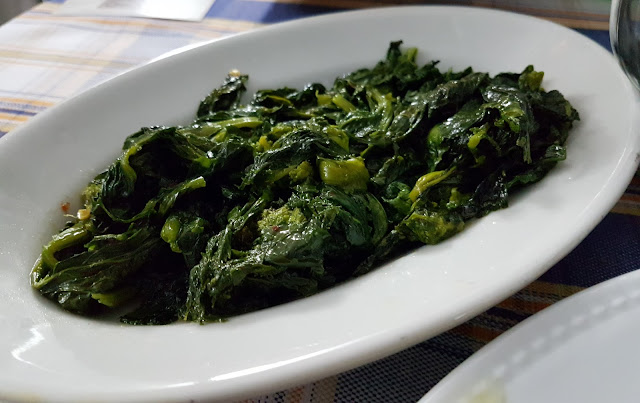 With the 20% discount from the nameless travel website's reservation system (hint, hint Yelp), the bill came to €17.20, a bargain for two courses, a 1/2 liter of wine and water, and "coperto" ("cover charge"which includes bread, silverware, napkins, etc.). There was no "servizio" (tip, but literally "service") included, so I left a generous tip * by Italian standards, using the undiscounted amount (€21.50) as my basis. 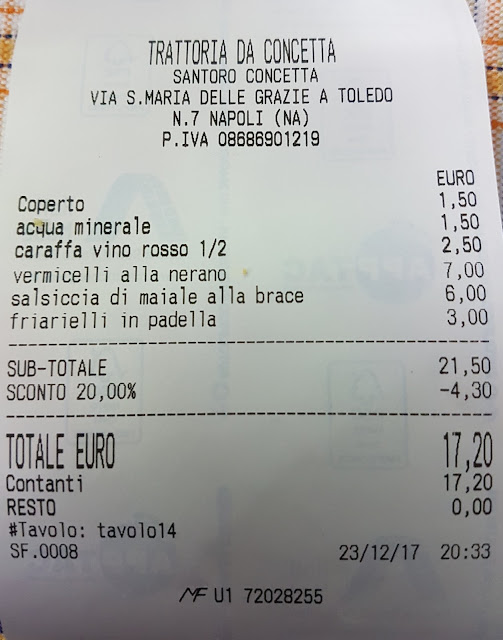 My meal was very good, the environment clean, although a bit too bright for my eyes, and the service excellent. My only concerns and the reasons for my deduction of "Bombs" are as follows:

1. How could you be out of carbonara?
2. The pasta was a bit bland, needing added parmigiano
3. The sausage was too pink and we all know what undercooked pork and chicken can do to you ... Gordon Ramsey would have had a shit fit!
4. They did not seem overly impressed when I gave them my card and explained who I was ... Don't they know how popular my blog is ... WTFO? 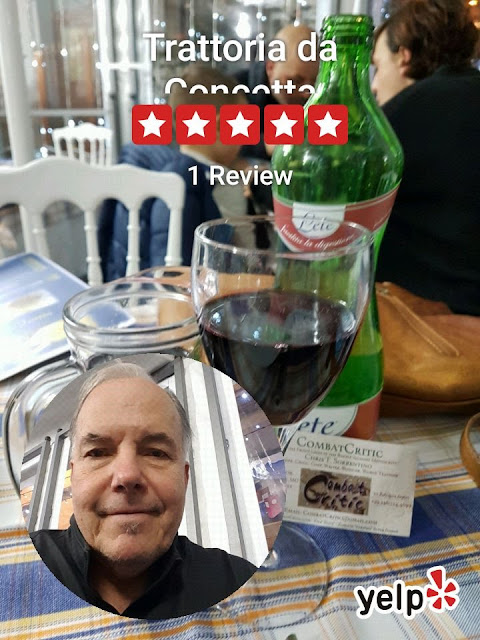 * Many Italians do not believe in tipping because cameriere (waiters) in Italy are part of a proud and respected profession - food is extremely important here - and are paid fairly well (much better than in the USA), but some will leave a Euro or two no matter what the amount of the bill might be. Additionally, Italian etiquette suggests that if you are served by the owner of the establishment, you should not leave a tip because it is considered a bit of an insult. 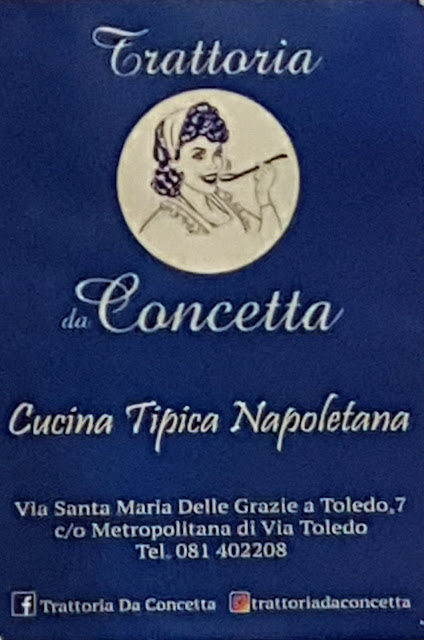 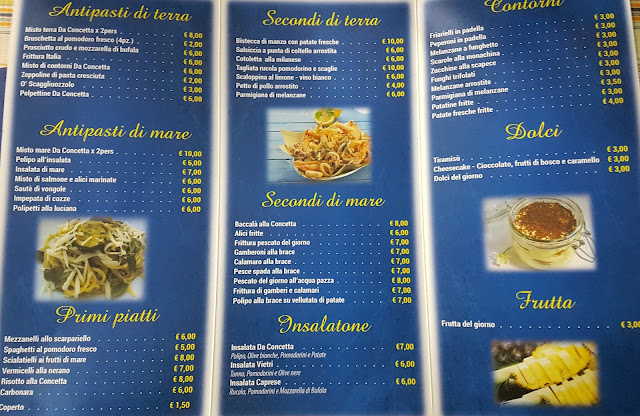