Rabat, Malta: No "Rabbit" At This Rabat Cafe, Just Decent Food And Bread That Cost Us Two "Bucks"

Visiting Rabat for the third time (on our way back from the Tarxien and Ħaġar Qim Temples), it was Immaculate Conception Day in Malta and the second day of Rabat's four day Christmas Festival (6-10 December 2017). The streets were packed with vendor stalls selling Christmas foods and wares and people milling, very slowly, about. 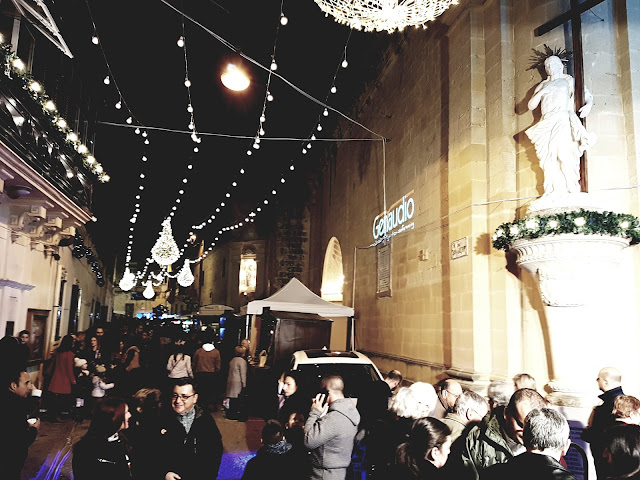 We saw a sign on the main street pointing down a side alley toward Toffee and Co, claiming reasonable prices and €2 mulled wine, so we took the detour. 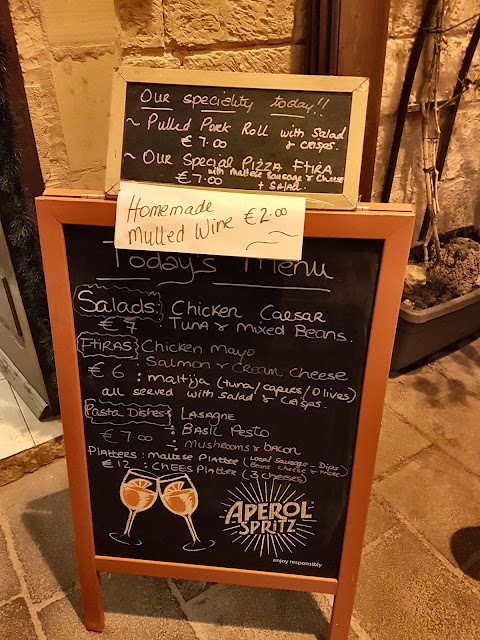 The entire menu was posted on a chalkboard out in front of this small bar with a few tables outside, one in the entry and six more up the narrow wrought iron spiral staircase to the second floor. Toffee and Co is a cute little place in a historic building, but lacked charm with simple mix & match tables and chairs and a couple modern prints adorning the walls. We decided to have a look around for a more substantial menu, but quickly returned after becoming overwhelmed by the throngs of wall-to-wall people in the streets. 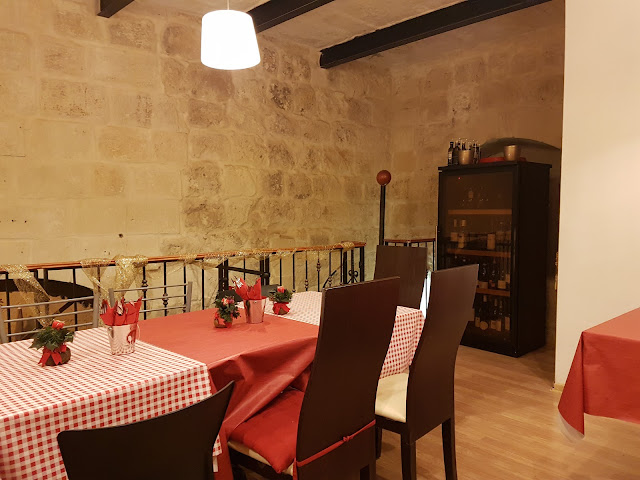 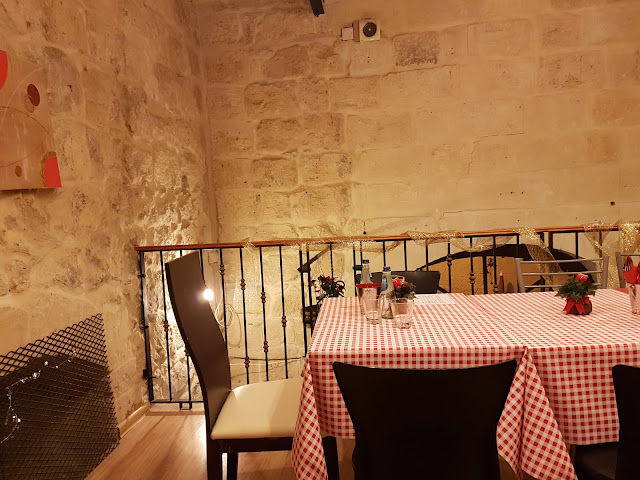 Virginia, our German-born server, could not have been nicer or more inviting, but the service was quite slow due to the large demands on her time from passers-by wanting inexpensive drinks and the limited staff on-hand. Normally, I would dock them a Bomb (Star) or two, but Virginia was one of the highlights of the visit and had no control over the throngs requiring her presence downstairs. 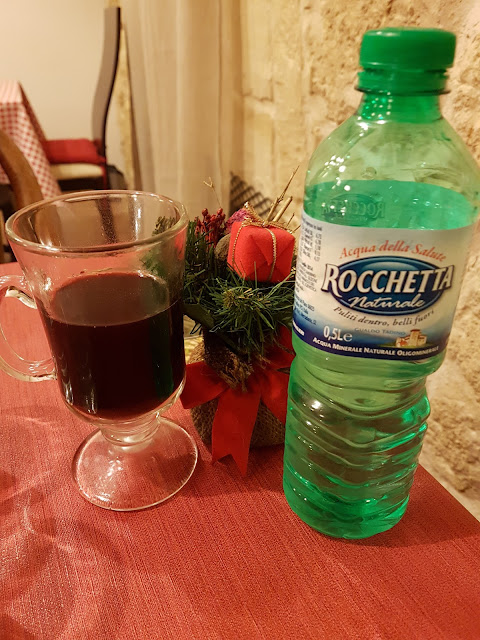 We started with the Mulled Wine (€2 - two glasses each), a 50 cl bottle of Natural Water (€1), and the Maltese Appetizer Platter (€12) that we saw at a table next to us, having looked divine. The mulled wine was warm, strong and spicy, just the way it should be and less than half the price of the stalls selling it in the streets. 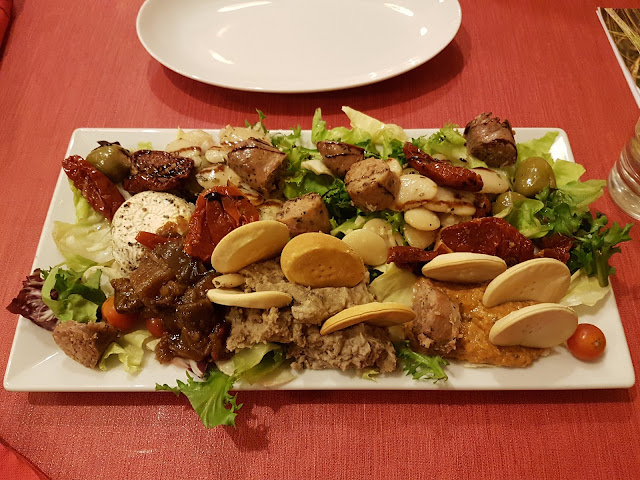 The Maltese platter was delicious, a large rectangular plate with goat cheese, local olives, tomatoes and lettuce, tuna dip (that did not taste like tuna - a good thing), Bigilla (a Maltese broad bean dip), sweet and sour eggplant (melanzane agrodolce), fava (broad) beans, cherry and sun-dried tomatoes, slices of Maltese sausage, and thick, crunchy Maltese crackers. There were not enough crackers (7) to eat all of the food on the plate, so we asked for some bread, a normal accompaniment to any Maltese meal. We were apparently later charged €1.50 for the bread because we never saw an itemized bill and the final total was €1.50 more (€36.50) than the total of the other items (€35). 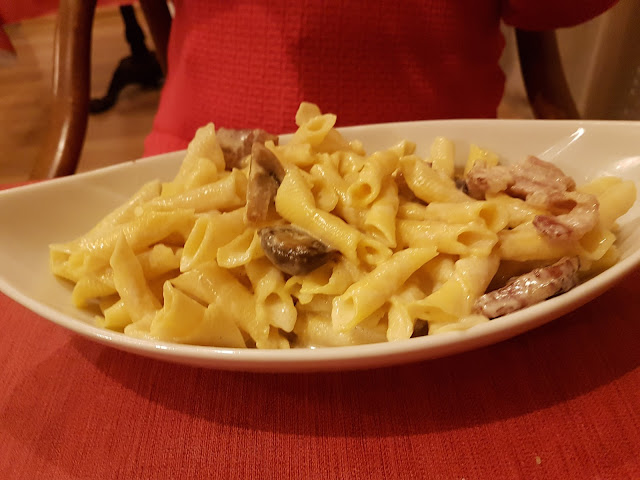 I did not want the lasagna (€7) because it had probably been made earlier in the day and would likely be reheated in the microwave behind the bar, so the only other options were one of two salads (chicken Caesar or tuna and mixed beans), a pulled pork sandwich (€7 - boring), penne in a pesto sauce (€7 - probably pesto out of a jar), or penne with mushrooms and bacon in a cream sauce (€7), so the only obvious freshly made, desireable option was the pasta with mushrooms and bacon.

The serving of pasta was decent for the price and the penne cooked perfectly al dente, but there was barely enough cream (panna) sauce to coat the pasta and not a lot of bacon or mushrooms. My wife, who is Sicilian, pointed out that the pasta needed salt because it was rather flavorless. I had asked for shaved parmesan (parmigiano) on mine, so it was a bit more flavorful than my wife's, but still somewhat bland. 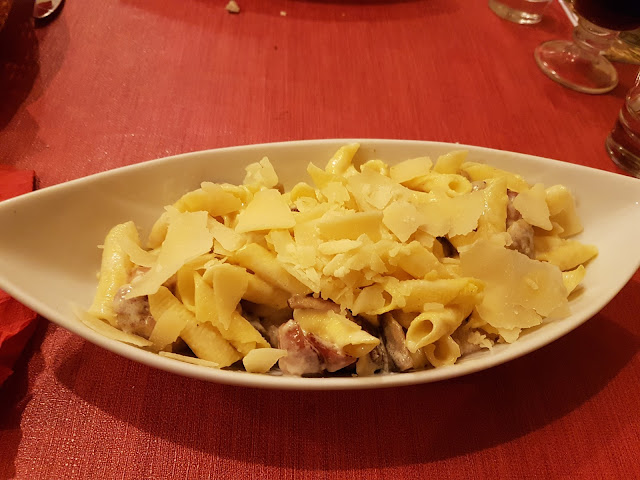 Toffee and Co averages 4.5/5 stars on TripAdvisor, which I refuse to use unless absolutely necessary - it is the only option in Malta with Yelp and Zomato not yet on the scene, with 77% of reviewers giving them 5/5 Stars. Unfortunately, I cannot in good conscience give Toffee & Co 5 stars (9-10 Bombs) because, comparatively speaking, we have had much, much better €35-€40 meals on Malta, including a bottle of wine. I told you I would not deduct for slow service and I will not, but charging us €1.50 for bread without first informing us (1 Bomb deduction) was off-putting as was the lady (likely the owner) behind the counter who was abrupt and unfriendly (another 1 Bomb deduction). The bland pasta accounts for the final 1 Bomb deduction, so ...

Title: Rabat, Malta: No "Rabbit" At This Rabat Cafe, Just Decent Food And Bread That Cost Us Two "Bucks"